Their kisses at FRC hands down was the hottest i have ever seen on any franchise. I was like..." gee....get a room you two!

". I think i saw other posters too noticed whenever they kissed their hips were attached to one another

Their chemistry is hot..but they also seem to have a strong foundation of friendship and just similar POV about life and love, along with the same sense of humor. I just get the 'lasting' vibe from these two.

I dig Lee's humor and self awareness. Its beyond cute when he can say "we're like two peas in a pod" or "we have finished e.o's sentence already" in the middle of making out

on a related note: @AllAboutLove: i think the pattern hold so far for these AU final couples with their typical hot kisses that you have noticed and compiled...

Tonight we chat to the #BacheloretteAU's Georgia and Lee LIVE at #TheProjectTV desk!  pic.twitter.com/pyuI26ZhYW

Happy-Lee. God I love these too 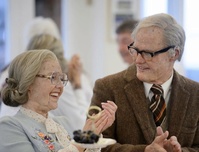 The Project confirmed for tonight

@Sundy I just noticed that The Project deleted their posts about GL being on?

I'm in my happy place! I'm loving this thread.

I've had a really looooong day at work dealing with dry contracts and never-ending negotiations and I'm now sitting with my feet up sipping a tall G & T reading all the posts and catching up with all the news.

...  it's so good to read all of this! Thanks for all the updates guys - great way to start the weekend!

Oh no it has been. This is so incredibly sad. I'm sure they will mention something. Will keep you posted

I think that what they are going through at the moment as a couple and a family will make them even more united and stronger than ever. I couldn't think of a more supportive and sensitive man than Lee to be there for Georgia and her family during this terrible time.

All I really wish for out of this very sad situation is that the media is less intrusive and prying into their lives and I hope that they just step back and let Georgia and Lee take the lead on when they want to do media interviews etc.

Just catching up and I'm happy and sad all at once. I'm glad Georgia got her happy ending and that she has someone to support her and her family at this very difficult time. I agree @Katiebelle that this will make them bond even more. I just wish that this time when they should be so happy together, wasn't so bittersweet and I do hope the press lay off and don't make things more difficult.

On a lighter note, this has been one of my all time favourite seasons of this show...from any country. Georgia and her great group of guys have been a joy to watch. In addition, it was nice to just be able to watch the show and try to see if I could pick the winner, without wondering if I was being influenced by my knowledge of the spoilers. I picked Lee as one of my top contenders from the get go and the more I watched, the more I became convinced he was it. I didn't really have much doubt of the outcome...now if only I could be as certain with the Canadian Bette.