I know Us Weekly isn't 100% accurate and I stated that. I'm simply just stating that when it comes to behind the scenes information about the show and what happens in the finale or close to the finale (not about the people on the show specifically) they have been accurate before.

It could be as little as Raven looked giddy in the morning so they must have done it.

Well didn't RS say the episode shows her hi-fiving people in the morning and running around looking happy and the show clearly hinting that she got her big O?

I know Us Weekly isn't 100% accurate and I stated that. I'm simply just stating that when it comes to behind the scenes information about the show and what happens in the finale or close to the finale (not about the people on the show specifically) they have been accurate before.

I do agree with you that the show producers themselves have clearly been US Weekly's source at times, particularly when they detail in very specific detail things that happen in an episode. For example this season they were the ones who first wrote about Nick and Corinne and the whip cream situation.

That said, because the producers themselves are the ones who are most likely their source, it's to their credit to put out the stuff they're trying to sell with the editing and stuff. And hey, it's also more than likely that Raven or even Nick would have talked to one of their handlers/producers about what happened.

That said, as much as I like Nick, I said it weeks ago that I wasn't going to hold out hope for him only sleeping with his F1. The fact is this is just the really icky reality of this whole franchise. Robby hinted at the fact that he and JoJo slept together and JoJo was so clearly gone for Jordan from the start. And the fact is Nick is clearly not someone who shies away from sex.

Yes, I agree with some that I would think all Raven's talk prior to the FS would have been enough to turn him off sleeping with her but to each his own. And I definitely never thought if the opportunity presented itself, he and Rachel wouldn't be intimate because I do think he was legitimately very attracted to her.

However, I think the other thing most rarely seem to consider is that sex isn't always full intercourse. In other words, there is a lot that can be done sexually that would be more than enough to give Raven an orgasm without her and Nick's um sexual parts connecting.

[You must be registered and logged in to see this link.] wrote:Do we know that he had sex with the other two - Vanessa and Rachel ?
Nick was pretty adamant before with Andi - asking her - how she could have sex with someone else shortly before becoming engaged to her F1.  Is this why the producers split the fantasy dates up?  We've talked all week about Raven's revelations and how impossible a relationship between N and Raven could be.  Now if there is the implication or question that he did not have sex with V or Rachel, there is going to be all kinds of discussions about that - for the remaining week. - and the possibility of what defines "sex."  Nail biter til the end !

I don't believe he had sex with Raven, but TPTB will do their best to make it seem like he did. Also, regarding the US Magazine, if they said "slept together" they could be right AND Nick still may not of had sex with Raven. I have "slept with" my sister in the same bed, but I sure didn't have sex with her! cantstopl giggling

US Weekly is obviously reporting what the show is trying to sell us. Whether what the show is selling is true, however, is a totally different matter. If Raven is skipping around high-fiving people then clearly they want us to think they had sex. I won't believe it unless they confirm it themselves though. JMO.

[You must be registered and logged in to see this link.] wrote:I don't believe he had sex with Raven, but TPTB will do their best to make it seem like he did. Also, regarding the US Magazine, if they said "slept together" they could be right AND Nick still may not of had sex with Raven. I have "slept with" my sister in the same bed, but I sure didn't have sex with her!  cantstopl giggling

IMO the turtle neck and the pillow between them would more likely indicate sleeping sleeping.

So many good posts! I totally agree with so many of the points made here, including:

1) The show is most likely the source for these leaks and the leaks serve the storyline they are trying to sell us.

2) Raven may not be completely truthful about what happened or she may play along with the antics (skipping, etc) in order to imply something that may or may not have happened in the FS. I personally don't believe 100% of what comes out of her mouth, because I do think her stories (stiletto, no ILY, etc) were for revenge against the ex.

3) It could very well be that Raven had an O in the FS WITHOUT having sexual intercourse. So, therefore, some of what is being implied is true, but they technically did not "sleep together" in the conventional meaning of that term. In fact, other than the fact that any lead being so intimate with more than one person just days before professing true love and getting down on bended knee being so icky anyway, the O without penetration theory may be a vey good thing...kind of, sort of. Stay with me for a moment....

I mean, if Nick had sex with Raven, I cannot imagine Vanessa being ok with that in any way shape or form. She already was shown saying "I don't feel special" about the asking for the dads' (plural) blessing. If that left her feeling unspecial, what do you think her reaction to Nick double dipping in the FS's would be? I shudder to think!

So, what if Nick was physically attracted to Raven and had some fun with her in the FS, but not to the level of intercourse because, despite Serpent Andi's tempting permission, he didn't want to complicate things to the level that full on sex would bring? But, sexual god Nick, unaware of his sexual powers, or perhaps aware of and willing to take one for the team, decided to "gift" Raven with her first O. I say this with all seriousness: In so doing, he would actually be doing her a good service, educating her about her body, etc. Maybe he cared enough for her to want to do that for her, but also thought that he would be showing restraint by not fully sleeping with her. In his mind, he may have thought that this was a win-win. Then of course, TPTB enticed Raven to play along with the skipping antics and gave leaks to the magazine to make it seem like they actually had sex. I could definitely see this happening.

Also, IMO, I think there may be a high likelihood that Nick picks Vanessa as his F1 but does NOT propose at the FRC. If he does this, IMO it is a smart move. He choses the woman he wants, doesn't have to justify how he proposed days after being intimate with another woman, gets to "make her feel special" for the months while the show is airing, get full clarity as to whether or not he truly WANTS to be engaged to Vanessa, and he gives another cliff hanger to this season. This could be the history-making ATFR that MF is hinting at. "Will he or won't he propose to the F1? To be continued..."

Love the rambles @miahawk. But I really don't think (or at least really hope) that Nick would allow anything sexual to happen with Raven. What I CAN see him doing, is spending their time having a good long discussion about her wants and needs, and why she allowed herself to spend 2 yrs in an unfulfilling relationship. We can't overlook the 'brother' in Nick. He comes from a house full of sibs, which creates a different dynamic than small families. I think it made him someone who seems to really 'see' people and seek to understand them.

Plus the fact that this wasn't his first rodeo and he is a smart guy. No way would he fall prey to this little sexual plot. I hope I hope....

[You must be registered and logged in to see this link.] IMO sex is sex whatever form it takes - even over the phone - and can be misleading for a woman who is falling in love. I can hear it now, "I did not have sexual relations with that woman." - Nick Viall (hehe)

I really wanna know what rachel wrote to raven during the ceremony, she had to write it knowing she was going home or maybe just writing it came one of them went home.

Wonder if she was asking if she slept with nick maybe 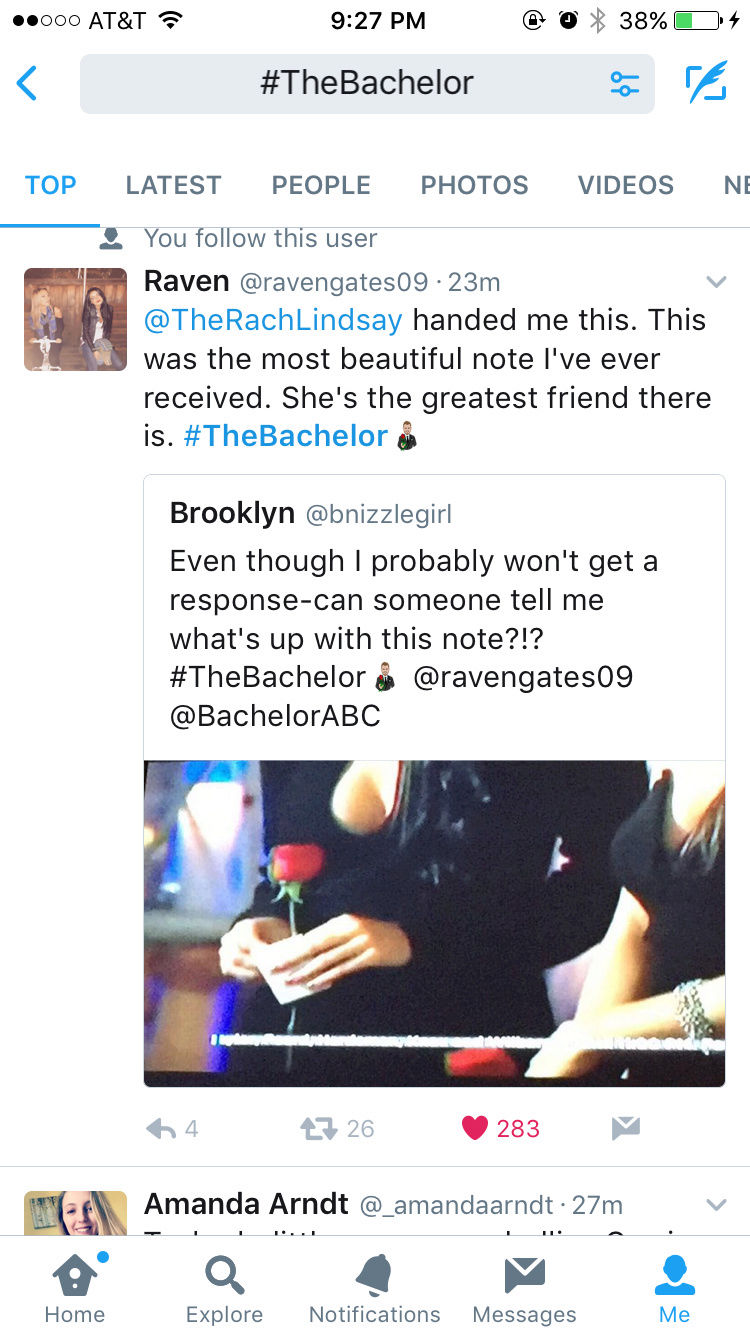 So Rachel already had a feeling she would leave and gave Raven that note?

It could also be just a "hello there, whatever happens tonight... here's my contact information" type of note. But I seem to remember some of the contestants in different seasons say that they knew when their time was up. I wonder if Rachel had an inkling because no type of "sex" happened in the FS?

I think it's pretty obvious that Rachel did not like her then and still does not like Vanessa today. IMO it's possible that Rachel saw Vanessa as her main competition and without her, she would be with Nick at the end of his journey. Come to think of it, every contestant probably asked at one point, what don't I have that she has? I wonder if anyone saw Raven as a factor in N(F1)=HEA?