@blueblues wrote:Nice vid from rehearsals
Nick Viall Admits He Couldn't Do Dancing With the Stars Without Vanessa Grimaldi (And She's Learning Steps Quicker Than Him) 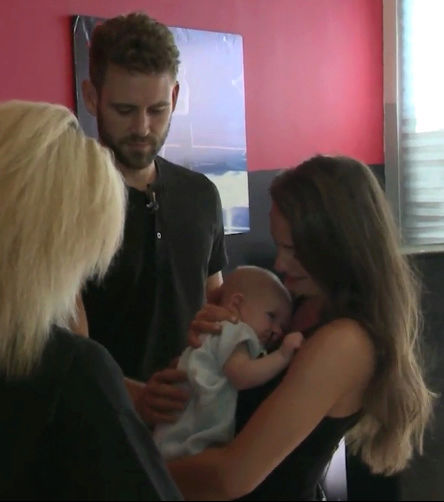 Comfort Zone is just a prison of our own making. // If you don’t push yourself, you don’t know what you’re capable of.
So many people just want to be copies of someone else. // You don’t have to be blood to be family. [Warwick]

@AllAboutLove wrote:Vanessa says she is Nick's number one fan and biggest supporter!!!!

.@VanessaGrimaldi is supporting @viallnicholas28 every step of the way! See how it pays off tonight on Dancing with the Stars. pic.twitter.com/qhCwYo3ovn

.@VanessaGrimaldi is supporting @viallnicholas28 every step of the way! See how it pays off tonight on Dancing with the Stars. pic.twitter.com/qhCwYo3ovn

@coolangel wrote:Nick's season of the Bachelor just got nominated in the 'Best Reality Competition' category at the MTV Movie and TV Awards to be held at L.A.'s Shrine Auditorium on Sunday, May 7.

@notarose wrote:Real news recap of the week
- some of the Vialls spent a few days in LA, V took the 2 youngest to Universal studio, the fam attended DWTS (experiencing "the kiss" firsthand) then the after party
- Jade, Tanner, Carly, and Evan were guests at DWTS but it is unknown whether Carly/Evan spent time with N&V update (thanks @julie81 - dinner with Janner the evening before.
- Nick alludes to kissing V as what he means by "relax" (while waiting for scores)
- N&V ignored the paps outside the after party
- Nick filmed something for "The Polished Gent"; Vanessa started an IG account for her charity "No Better You"
- Nick's 2nd dimple was revealed; he may be baby-faced bare on Monday
- they will plan their own wedding and are open if the option to televise arises (Mario interview)
- V reveals on IG that she knew Nick was her man on their 1-1; Nick says his knowing is "a trade secret" (radio interview)
- V was a gymnast as a child; Nick wanted to be a cartoonist - among other things - as a child but now rarely draws (radio interview)
- Nick still practices all the dances he has learned (interview)
- V did an IG story Bombay ad with code; N&V did a clothing post at Coachella then seem to have left to watch the Habs game from a lowkey venue
Engaged: 5 months

Did I miss some things?

You can vote once per day!!

Vote for Nick on Dancing With The Stars

@notarose wrote:Breakfast Television @BTMontreal
TOMORROW: @VanessaGrimaldi won the heart of #Bachelor @viallnicholas28 - she's back from L.A. and telling us all about her new life!
https://mobile.twitter.com/BTMontreal/status/867515680463212544

Legal Logik @LegalLogik
Tune in to @BTMontreal tomorrow morning for a chat with @VanessaGrimaldi and @jbenizri on the No Better You foundation. #specialneeds #mtl
https://mobile.twitter.com/LegalLogik/status/867587206881439744

@AllAboutLove wrote:These two are the hottest, sexiest, most stylish bach couple ever IMO

Also, I love love LOVE Nick's caption for Vanessa as his woman crush - which reminds me of when Nick said Vanessa is his celebrity crush on JKL

@nickviall My WCW ...Can't take my eyes off you