@GuardianAngel wrote:@hae1001 Thanks for that.

Just a reminder, it is private.

At the time of that post, which advised us the IG was reactivated, it was just a reminder on my part that even though it was reactivated, at the time it was private. Therefore whether he is following anyone back, we do not post info from private SM.

It is not private ATM.

His trial was originally supposed to start tomorrow. I don't know if it is going to go forward or not, he has been posting more often on his instagram/he is showing harvest stuff nothing to do with the bachelor

By this time, "Bachelor" should be firmly entrenched in his past, especially because it turned out so badly. He has more real life issues to face at this time. JMHO.

@mtnlvr55 wrote:His trial was originally supposed to start tomorrow. I don't know if it is going to go forward or not....

Court documents filed Tuesday (November 13th) show Soules pleaded guilty to a misdemeanor charged of leaving the scene of an accident resulting in serious injury. He faces up to two years in prison.

Soules was originally charged with leaving the scene of an accident resulting in death, a Class D felony.

According to court documents, Soules’ sentencing is scheduled for Jan. 19 at 1:30 p.m.


Chris Soules Pleads Guilty in Fatal Car Crash Case
More than a year since his April 2017 arrest, Chris Soules has entered a new plea in his fatal car crash case.

The former Bachelor, dubbed "Prince Farming" during his reality TV days, entered a written guilty plea to leaving the scene of a personal injury accident on Tuesday, Nov. 13, E! News has confirmed.

The plea comes 19 months after he was arrested following a car crash in his native Iowa. At the time, the Iowa State Patrol confirmed to E! News that Soules was driving a pickup truck that rear-ended 66-year-old Kenneth Mosher's tractor trailer. According to authorities, the 37-year-old reality star left the scene prior to law enforcement's arrival and was later arrested 15 miles away at his Arlington home in the early morning. Mosher was taken to a nearby hospital, where he was pronounced dead.

Soules' attorney, Gina Messamer, tells E! News in a statement, "The prosecutor has amended the charge down to a misdemeanor and Mr. Soules has entered a Conditional Guilty Plea to the misdemeanor charge. This misdemeanor charge carries a penalty ranging between a deferred judgment and no jail time up to two years' incarceration... The basis for Mr. Soules' guilty plea is that he failed to provide his registration information to law enforcement or 911 dispatch as required by Iowa law."

Soules appeared in court the following morning, where he was charged with leaving the scene of a fatal car accident. He was released after his mother, Linda, posted $10,000 bail on his behalf.

"Chris Soules was involved in an accident Monday evening (April 24) in a rural part of Iowa near his home," the reality star said in a statement issued by his attorney. "He was devastated to learn that Kenneth Mosher, the other person in the accident, passed away. His thoughts and prayers [are] with Mr. Mosher's family."

"They both know each other," Mosher's neighbor Richard Roepke told E! News at the time. "[The Moshers'] know the Soules'...They are both long-term farmers with their roots here in Buchanan and Fayette County so that's what makes it even more difficult is that they are over the fence neighbors."

Audio of a 911 call later revealed that Soules had called police before leaving the scene and checked Mosher's pulse and breathing during the call. Though Soules said he could feel a pulse, he confirmed there was blood coming out of Mosher's mouth and that he appeared to stop breathing.

In May 2017, Soules pleaded not guilty to the charge of leaving the scene of a fatal accident.

"While initial reports suggested Soules fled the scene, the 911 call confirms that Soules in fact was the one who contacted law enforcement immediately," his attorneys said in a statement to E! News in April 2017. "During the call, he clearly identified himself and explained his role in the terrible accident. Soules attempted to resuscitate Mr. Mosher and remained on the scene with him until emergency medical personnel arrived." His legal team further filed a demand asking law enforcement to preserve possible evidence.

However, in January, Judge Andrea Dryer denied Soules' motion to dismiss the case.

Soules rose to fame as a contestant on the 10th season of The Bachelorette before taking over as The Bachelor for season 19. He ultimately proposed to Whitney Bischoff, but the two called off their engagement just a few months later. He also competed on season 20 of Dancing With the Stars and ultimately reached fifth place.

My guess is he won't get any jail time. I imagine he'll be glad to put this behind him. 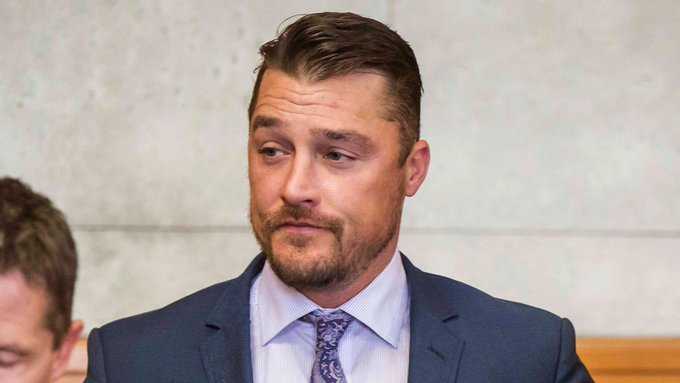 I don't like to be mean, but I hope he gets some time in prison. He needs to pay something back for what happened. Wonder if he has given up alcohol. JMO.

@Newto wrote:I don't like to be mean, but I hope he gets some time in prison.  He needs to pay something back for what happened.  Wonder if he has given up alcohol.  JMO.

@Newto,
I don’t think you’re being mean, at all. IMO Chris is getting an incredible deal. Whenever you hit someone from the rear, it’s very difficult to avoid the assignment of fault yet, they’re really just charging the bare minimum of leaving the scene. Also his leaving was well advised because toxicology testing was apparently hours later. Jail time would surprise me as IMO restitution has already been made privately to allow for the plea deal.

Since the victim was a neighbor, Chris was involved in the death of someone he apparently knew his whole life. IMO, That’s not a prescription for sobriety but, like you, I hope and pray he has learned the lesson about drinking and driving and modified his behavior accordingly.

Also, I have read that Chris has been staying in the area, living a very quiet life since this happened. Probably in his own h*ll because of it. This period has been almost as long as a jail sentence could be.

I have also read that the family does not blame him at all.

IMO, his life has already been changed drastically because of this. He will be punishing himself for the rest of his life. He doesn't need jail to do that.

I don't think there was any proof that he was drinking when the accident happened. I do think he was wrong for leaving but he did call the police and stay until the EMT's arrived. This had to have matured him because he has to feel a level of responsibility no matter what. I imagine he'll have some kind of probation and hopefully, community service.