Happy sleuthing potential contestants! Please remember if at any time, a contestant is airing on any other show, that is considered a spoiler for that show, therefore it cannot be mentioned until that contestant is eliminated.

Feel free to move any posts over here from

@Bobette wrote:Sam is in LA with Courtney. I wouldn't be surprised if he's in talks to be on the US BiP. Do we know when that will be filmed? 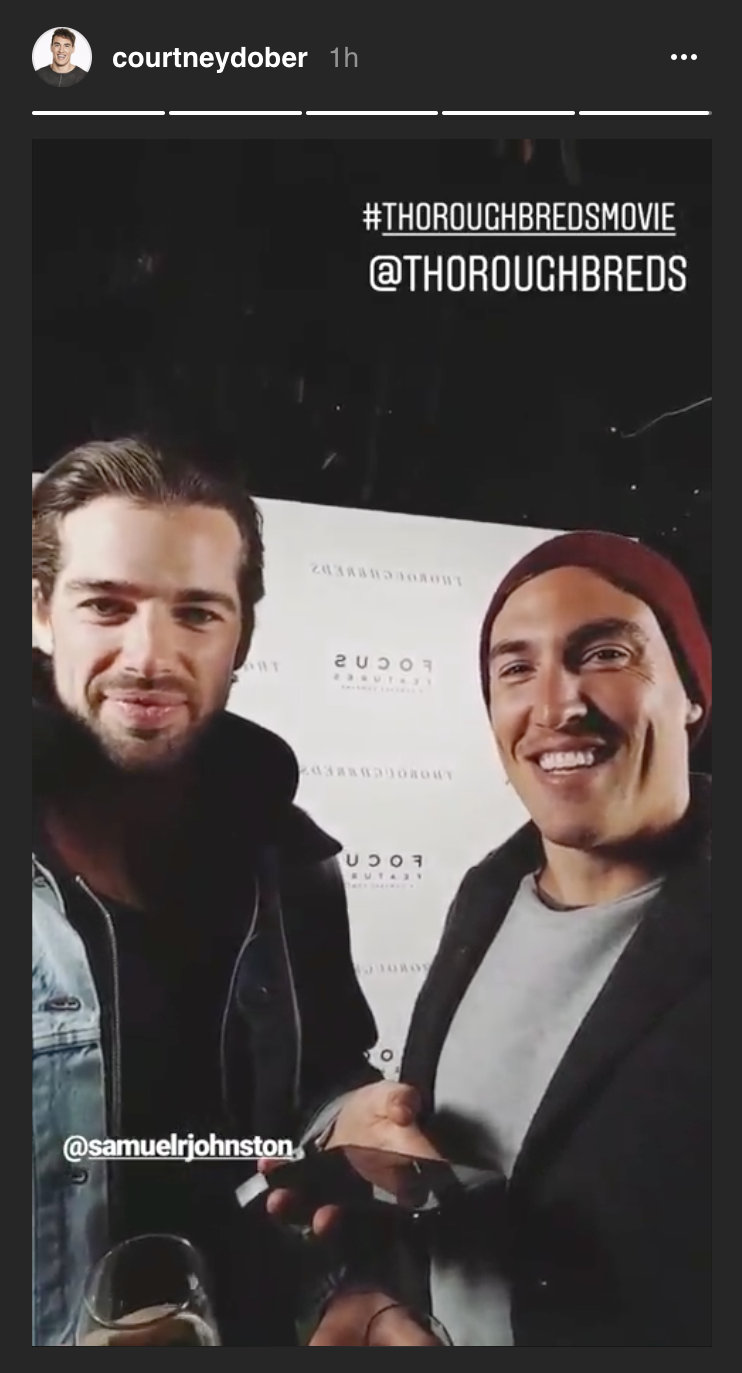 Oh, those ladies will be all over Sam. Not only is he fresh meat, he is gorgeous and that accent!

@Bobette wrote:
Speaking of Jordan, this article suggests he'll be on the next BiP.

At the World Tells All taping, former Bachelor of New Zealand Jordan Mauger eloquently told ET, "I do love Mexico, and I've gotta work on my tan. I love tacos. I think I'll do really well!"

Of course he will

sounds like Jordan's acting gigs must have slowed down so reality-tv it is. I'd be fine without seeing him on BIP so soon after WG and would prefer some fresh faces. jmo

Will 'Bachelor in Paradise' Get an International Cast After ‘Winter Games’? It Was Supposed to Last Summer!

Bachelor Winter Games has wrapped its four-episode run, marking the franchise's first foray into mixing contestants from its international iterations in with a U.S. version of a show. But it turns out, that almost happened last summer on Bachelor in Paradise.

Contestant Courtney Dobler of Australia told ET that he was set to head to Mexico for BiP season four, but didn't end up going because of the scandal that shut down the show's production temporarily.

So, what about this summer?

Host Chris Harrison told ET in December, right before Winter Games started filming, "Paradise isn't going anywhere. What I could see is, if this goes really well, this will come back, maybe we're doing this every winter now, and maybe Bachelor in Paradise goes international.... It's in Mexico, anyway! We're already international."

Robert Mills, ABC's Senior Vice President of Alternative Series, Specials and Late-Night Programming, says bringing international contestants into the Paradise mix would also make for more unexpected couples. "The thing about Paradise that's interesting is that a lot of [contestants] know before [the season starts filming] that they're doing Paradise, so those relationships kind of start to form beforehand," he said. "We had talked about, 'It would be interesting to bring in somebody that nobody knows is going to go on.' ... The international component was a way to kind of shake that up a little bit and throw a curve ball in."

The success of Winter Games seems to have cemented that new concept. "The reaction to the foreign cast members [on Winter Games] is great," Mills said. "I think it would be stupid not to use these people ... Cultural differences are so fascinating."

To name a few, The Bachelor has run original versions in the U.S.,  Australia, Sweden, the U.K., China, Japan and Finland. The Bachelorette has had success with original versions in the U.S. and Canada and many more. So, there's a big contestant pool to pull from. Plus, producers from the different variations of the series keep in touch and talk next steps. They all met recently for a multi-day conference.

"It's panels on the different ways the shows are produced," Mills explained. "Talking about what's worked in different territories; it's fascinating. ... A lot of business talk. In Japan, The Bachelor is run on Amazon, [we talked] here's how they do it, here's how we do it, would you ever run the show as a binge-watch type of thing? They were the first ones to do that. So, it was interesting to learn the different ways the shows are produced and for everyone to get to know each other."

Mills doesn't rule out anything when it comes to the future of the franchise's expansion. "I think Bachelor is a brand the same way Marvel, Lucasfilm, Star Trek are," he said. "We've just scratched the surface."

@TheWrongReasons wrote:@Bobette I believe US BIP films early-mid June (that’s just off the top of my head, so someone cmiiw). That Sam dude is pretty hot in a douchey way (IMO) - I wouldn’t mind seeing him on BIP

@Bobette wrote:Thanks @TheWrongReasons.  Yes I can definitely see Jasmine on next year's show.  I feel like there might be a two-tier system with BiP v BWG, i.e. BWG will attract people who would rather play sports and form relationships while those who are just out to get trashed, wear bikinis and hook up would be better suited to BiP.  Something for all tastes.

Yes Sam is hot but he's more the BiP tier - doesn't come across as sincere at all as evidenced by the fact that he was set to go on last year's US BiP even though he had a girlfriend at the time (and still does I think?).  On his season he straight up said he was only there to raise his profile and get into acting/presenting so... yeah, Mexico for him IMO.

ETA: Another possible international contestant for either BiP or BWG: Naz (Bach NZ, Jordan's season).  The Bach World YT channel has just uploaded a video of her.  All other videos on the channel are of contestants from BWG.  Co-incidence or pre-casting promos???  Would make sense IMO to have her on to tell "her side" of the coin flipping story.

Bibiana said she is hoping to be asked to join BIP in her interview on E&G podcast. She thought it would be more fun than WG because she is more of a beach person plus she said the WG competitions meant less time to chill and get to know everyone. Also mentioned that on WG only 1 girl was from her season and that if she gets to BIP she hoped there would be a group from her season. She didn’t mention any guy of interest other than she had a crush on Ben during WG ... sung his praises but didn’t mention him in connection to BIP.
Source

@notarose Thanks for posting.

So now they are not only begging to be on BIP they are picking and choosing who they hope to be on at the same time. She didn't like BWG so give her another chance on BIP?? IDK I can't get on board with the self entitlement attitude of some of the formers.

I still don't get why she was chosen in the first place to go on BWG.

Do you guys think Dean will be there? I have a feeling he will. Didn‘t someone post in another thread he was flirty with Kendall at Stagecoach?

Bibi - posted an IG story with Bill Dixon (producer) in LA yesterday but it is gone now. IMO that ups the odds she could appear on BIP
Seinne - her IG story today is with the same guy she has posted about before. I guess they could just be friends however it seems to lean more to dating. If so, she is unlikely to appear on BIP.
Kendall - nothing concrete so won’t give details but I think she might be seeing someone as well.
Jaqueline - she has said in a few interviews that she is single and checking with colleagues to determine if appearing on BIP would have negative repercussions regarding her career goals. Sounds like she is interested but would chose her career first if they advise her thus.

Anyone check in on Corinne? I keep my distance

I suspect her star is dimming so definitely see her taking any opportunity on offer. Would they offer?

@notarose Thanks for the info!

I don't know what Corrine has been up to but I think their replacement will be Bekah IMHO.

@GuardianAngel wrote:@notarose Thanks for the info!

I don't know what Corrine has been up to but I think their replacement will be Bekah IMHO.

Apparently last week Bekah posted an IG story that had a quick sweep of her appointment book. Someone on reddit got a screen cap of it and they said that they saw an entry for "BIP contract".  I couldn't see it but my vision isn't that great!

I've got the feeling that we will be seeing Bekah, Kendall, Tia, Bibi, and Caroline for sure.  Caroline and Bibi have been hitting the gym quite a bit lately and so has Tia. Tia and Caroline have also been doing stories about their healthy diets.  I still think that Tia and Caroline met with TPTB when they did their quick 1 day trip to LA.

A poster on reddit claims to have the "411" on Jacqueline. Her cousin was friends with Jacqueline at one time and still have many mutual friends. Those friends are not very supportive of her these days because she is considering going to BIP even though she told them she originally went on TB as a joke and wanted nothing else to do with the franchise.

Jordan from NZ made a quick trip to LA in the past week... to see TPTB? He has definitely made his interest in appearing on the shown known.

And, it totally wouldn't surprise me if Ashley I and Jared show up, become a couple and leave engaged. They are dating but have not officially announced it... Someone on reddit said they have heard that TPTB would love to have their "happy ending" play out on BIP.

I think there may be an increase in Canadians.  There has only been 1 Bette season so perhaps x number of women. I noticed the F1&F2 from the last BachCa season are hanging out today. Is Jasmine Lormier single again? She follows a lot of Bach alum and I could see her being coveted on the beach. IMO viewers could more easily assume an end couple form between Ca and US rather than someone from overseas. Plus, both Jillian and Kaitlyn are Canadian but there hasn’t been any Ca women on any of the offshoot shows so this might be the time.