I don't know what he's talking about so I'll put this here. It's probably the same big news/press conference he has every year which never materializes.

Due to #HurricaneLane, tonight’s press conference in Kapa’a has been canceled. Stand by, #bachelornation ... Announcement coming soon!!!

Nice show of support from Jason.

To have great friends, you have to be a great friend.
@coltonunderwood
is a class act, generous man, and hell of friend.  So happy for you brotha! Let the Bachelor Party Planning commence!
#TheBachelor

Maybe it’s just me but Lauren Zima doesn’t seem too thrilled about interviewing the next Bachelor
https://www.instagram.com/p/BnUcr24nGH6/?utm_source=ig_share_sheet&igshid=5oini6mmhgqd

Jmo regardless of what is what or who Is who, Lauren zima is a totally paid sludge coat tailed wanna bee. If not for all these peeps she would be who?? Major uggh with this wannabee nothing. Count ur blessings biotch

IMO, that Kimmel sex education bit was so

Colton seems like just a big, silly stooge to me.

I just thought of something today about the RISE of this relatively unknown guy. He has A GREAT AGENT!!! ( most likely a team...) Someone who is connected and his pulling all the right strings at the right time. We know that he had someone deal with his SM as he was filming. He had someone looking out for him and lobbying for him to join the cast of The Bachelor, then The Bachelorette and of course BIP.
Do we know other contestants who have actually hired publicist and managers to campaigned so much and to be in that position...? to the point of even using his Foundation as a launching pad to further his motives. There is a saying that true charity is the one that is done anonymously, without parade. ( it’s in the Bible, but can’t find the exact wording) anyway, many have complained that Jason was campaigning for the role, but the true campaign was started by Colton ( and his team) even before he joined the first Bach ‘ world episode. Don’t get me wrong, he seem like a good guy and have a good heart but his strategies are way too obviously orchestrated, it is a race that was won with an advantage that neither Blake or Jason had. Maybe Colton has the fabric and intentions to be in politics...just saying...MHO

I'm sure Colton has an agent. He would have needed one as a professional in the football world.

But I have learned something in the last month. Most of these BN people have switched their personal IG accounts to what is called a business profile. This gives them features not available to the casual user. One of those features is being able to schedule IG posts in advance. In early August it was mentioned on reddit that Blake had switched to a business profile on IG so I googled what that was. That is when I learned about being able to schedule posts in advance. A telltale sign of an IG profile is the header on the account. A business profile can add information a casual user can't. When I learned this, it made me think that Colton had a business IG account even before going on the show.

He has also changed his IG user name to ColtonUnderwood. 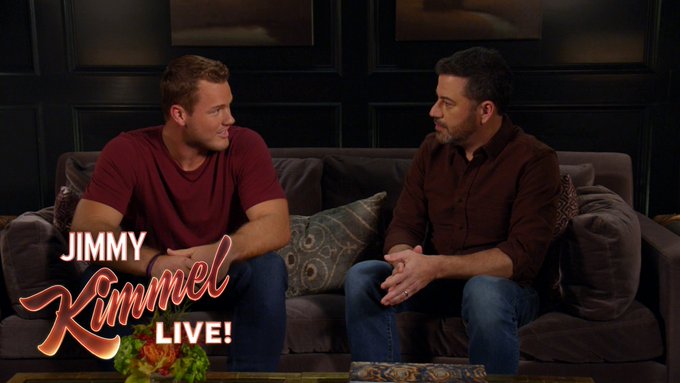 Jimmy Kimmel @jimmykimmel
In this segment, I give our new virgin Bachelor @Colton the “talk"… #TheBachelor @BachelorABC pic.twitter.com/hUy3mGcDwV

@Maddy And this is why I didn't want Colton as the Bachelor - too much emphasis on his virginity. Can't believe he'd stoop so low as to accept a paycheck for putting this on display.

^^^ and his season hasn’t even started yet...not even prodded by producers...