Wow! She is beaming!

What.  The heck.  Is this.  DM get a truckload of pics of Angie on some kind of date and then write this stupid article about her face, her hair, what she's wearing, her EYEBROWS.  I don't care about any of that!  Just tell us who she's with FFS!!! 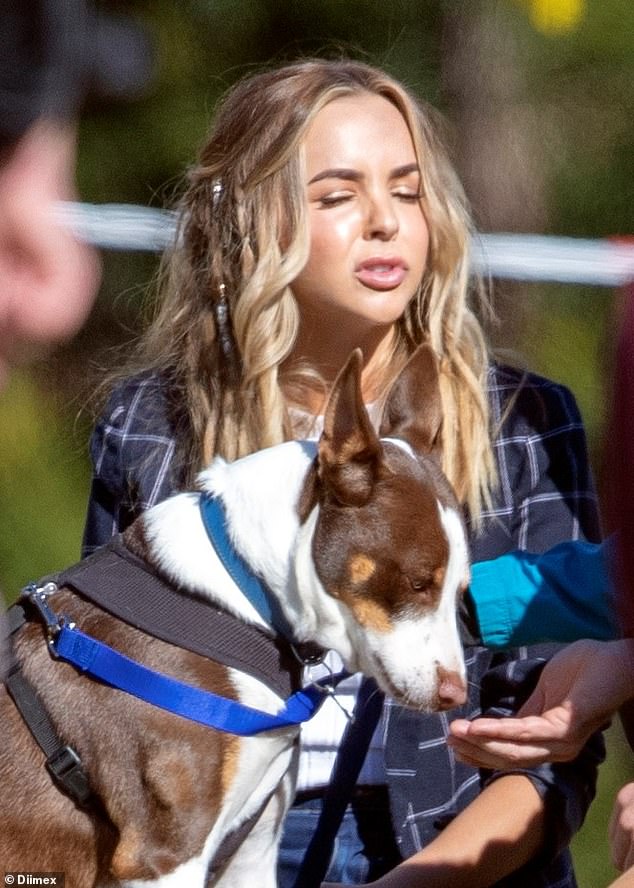 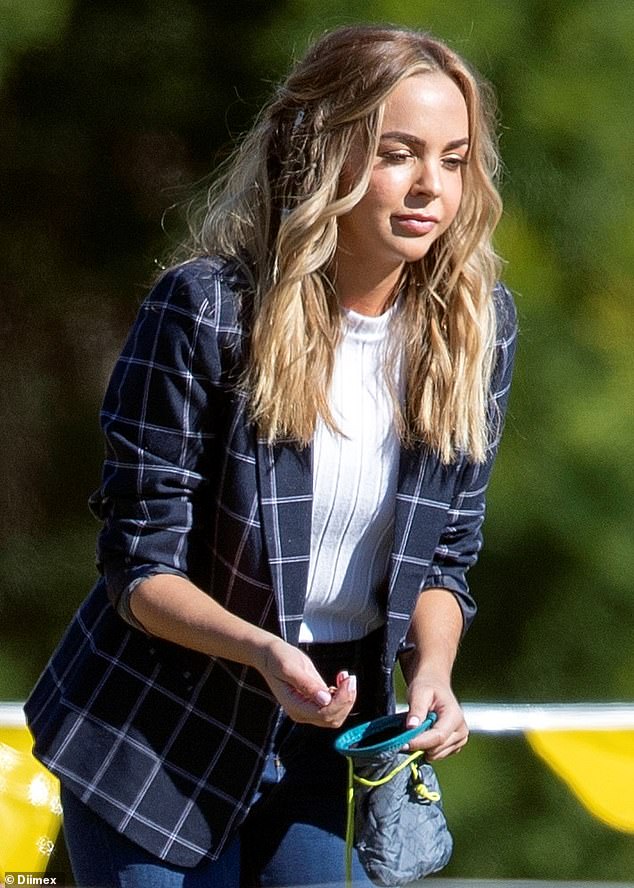 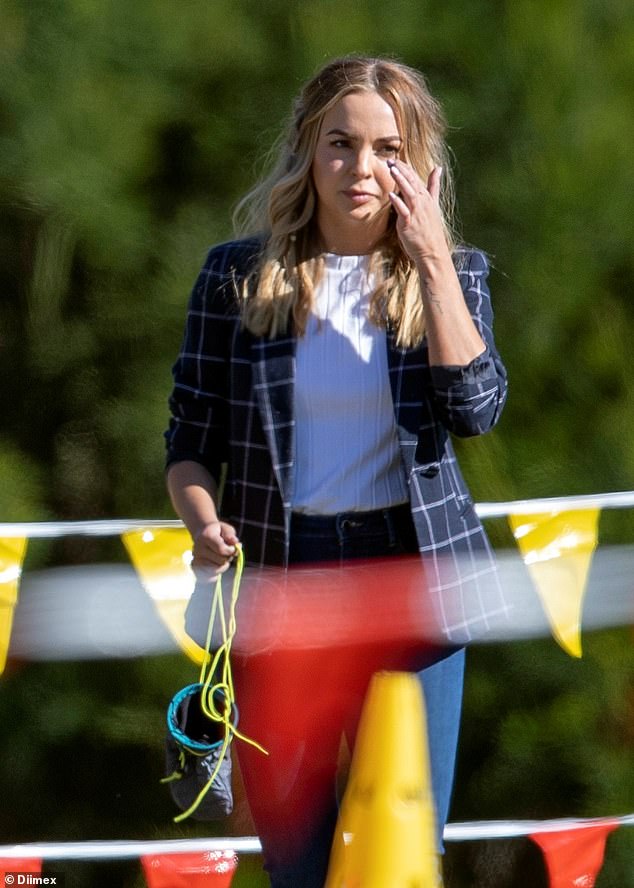 I can't imagine that this was a date, maybe some B roll? If there were any guys with her wouldn't they grab shots of them too?

@GuardianAngel wrote:I can't imagine that this was a date, maybe some B roll? If there were any guys with her wouldn't they grab shots of them too?

They've done similar things before - e.g. releasing pics of Osher & Matt on night 1 but not showing him meeting the girls till days later.  It looks like she's running dogs through a training course - maybe setting the scene for a group date before the guys arrived?

Pics of night 1 are up on Matrix but no guys pictured other than the ones we already know about.

Just give us the goods please paparazzos!!! Dates confirmed as 19 and 20th June, as predicted

'There's so many to choose from!' The Bachelorette's Angie Kent reveals she is spoiled for choice with her suitors - and says there are some 'very fun characters' in the new season

The Bachelorette's Angie Kent has revealed she couldn't be happier with her choice of suitors.

The former Gogglebox star, who is currently filming the dating show in Sydney, told Daily Mail Australia her journey so far has been 'exciting and very fun'.

Speaking at The Logie Awards on the Gold Coast, the 29-year-old said: 'Let's just say that I've got some good characters, they're very fun gents!'

'There's so much to choose from – I just don't know what to do with myself!' Angie added.

"very fun characters" sounds like code for "idiots" to me

Refresh my memory. She is in the middle of filming but left to go to the Logie Awards? She sounds happy though IMO.

Refresh my memory. She is in the middle of filming but left to go to the Logie Awards? She sounds happy though IMO.

Yes the Logies was on Sunday and - if this article is to be believed - the dog pics were taken Monday when she was "back on set".  Could explain why she's not looking too fresh if she got boozy at the Logies, but I really don't think DM needed to savage her appearance in the manner they did.  Seems some factions of the media don't like her IMO.  Wonder why...

The Bachelorette SPOILER: Angie Kent wipes away tears as she sends home a handsome suitor after an emotional rose ceremony

Angie Kent recently said she was 'spoiled for choice' with her two dozen handsome suitors on The Bachelorette.

But the former Gogglebox star, 29, is slowly learning that filming the reality show isn't all champagne and roses.

Angie was pictured wiping away tears after sending home a contestant during an emotional rose ceremony last week.

Dressed in a red jumpsuit and sporting glamorous hair and makeup, Angie looked worlds away from her couch potato days on Gogglebox.

She appeared distressed during a tense discussion with a producer in the courtyard of the Bachelorette mansion in Sydney.

A cameraman was on hand to capture all of the drama as he filmed Angie's tearful meltdown from a short distance away.

Angie escorted the contestant to a waiting car, where they had a brief exchange.

The man was dressed casually in jeans and hoodie instead of the standard tuxedo, raising questions as to whether he was eliminated or simply quit.

After he was driven off, Angie looked pensive as she spoke to a producer.

She clutched a champagne glass as the staff member appeared to offer support and reassurance about the situation.

At one point, Angie was offered a warm blanket as she took direction from several other production staffers. 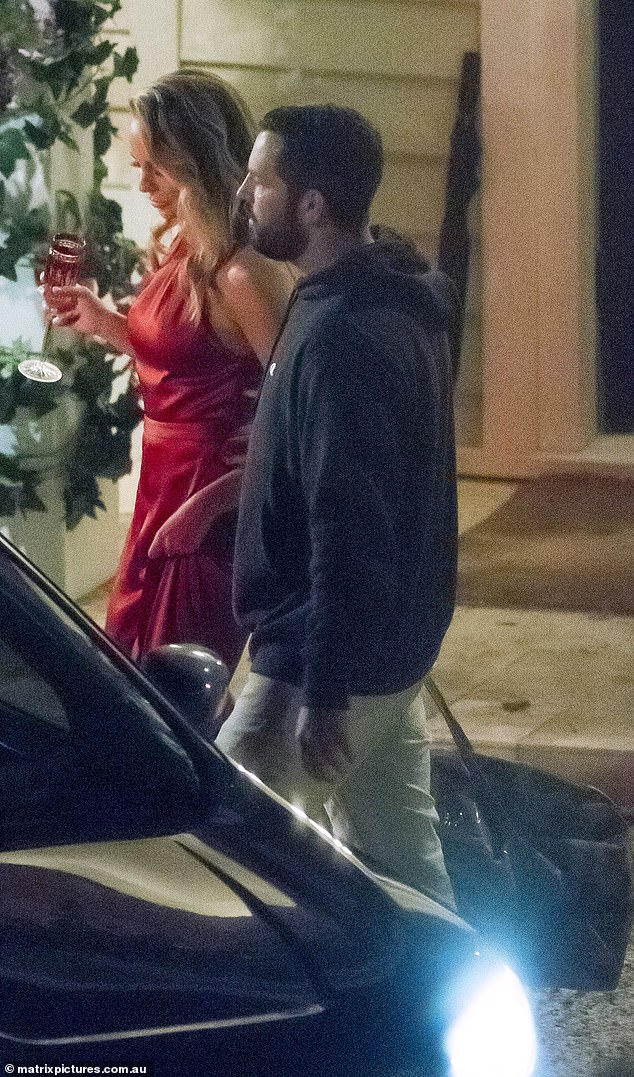 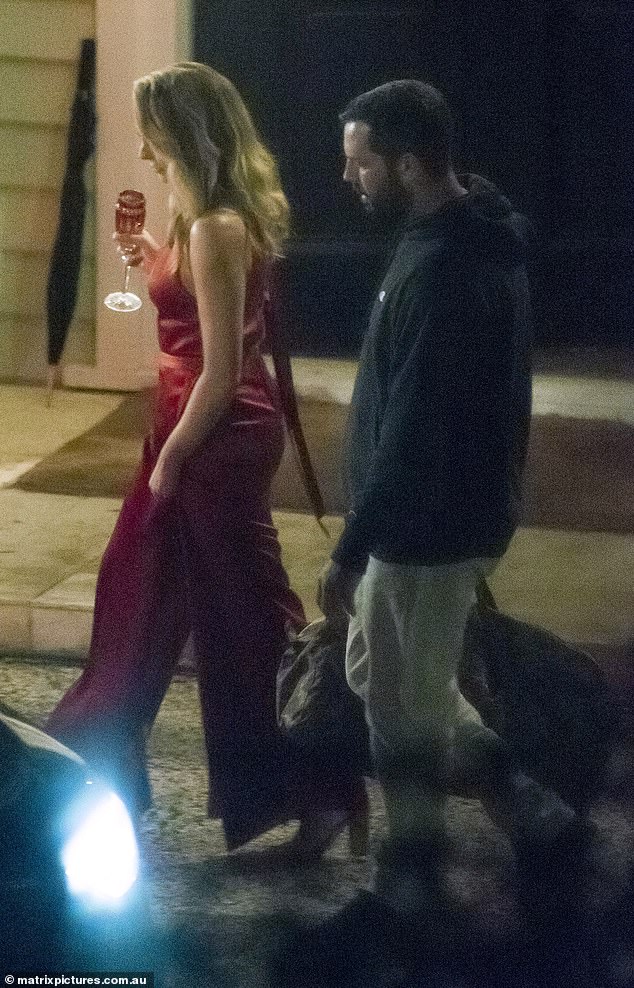 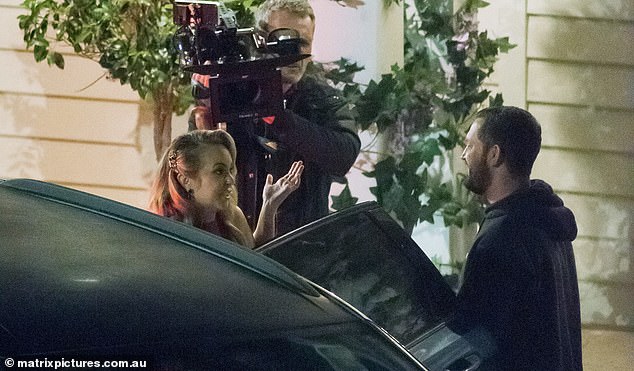 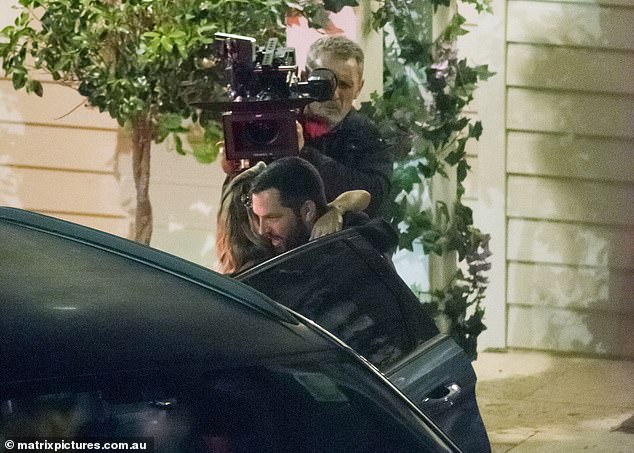 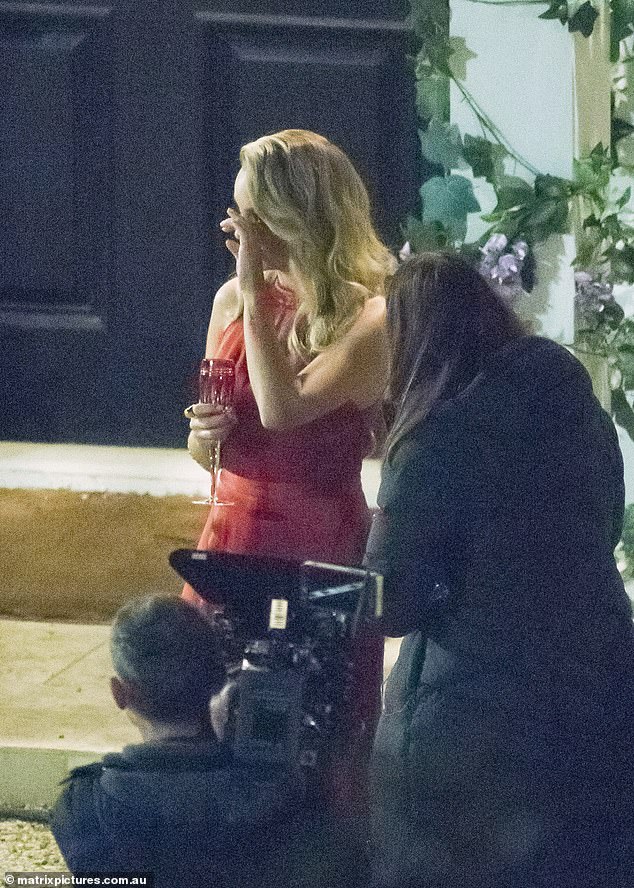 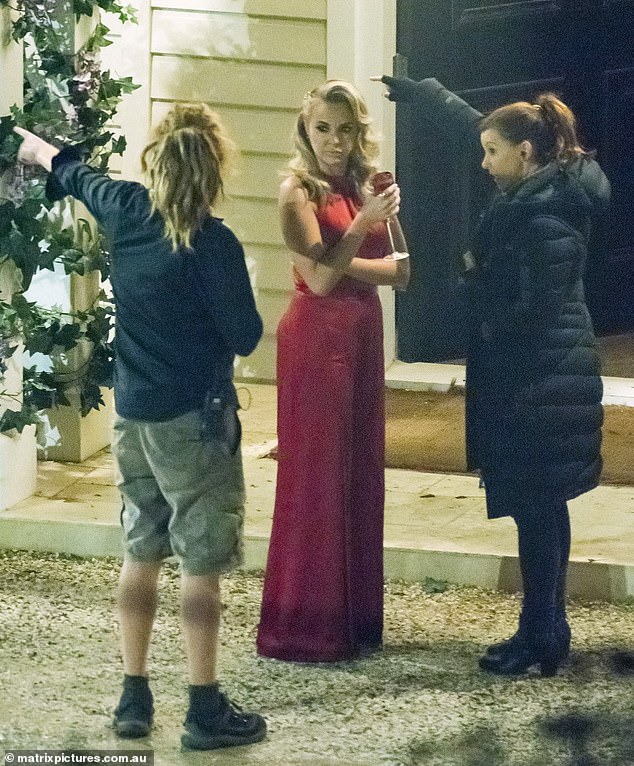 Earlier in the night, the reality star looked upbeat as she mingled with her suitors.

She was particularly drawn to a dark-haired gentleman wearing a pink blazer, navy pants and brown dress shoes.

The pair embraced during a private moment before the rose ceremony. 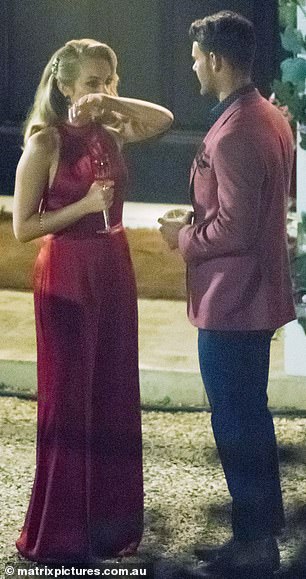 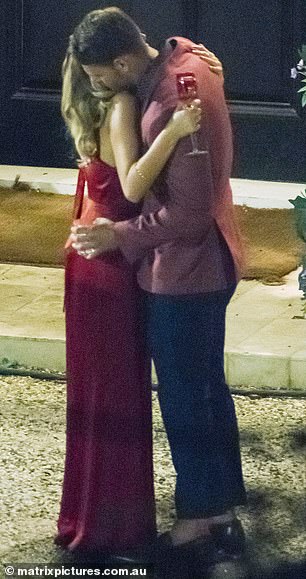 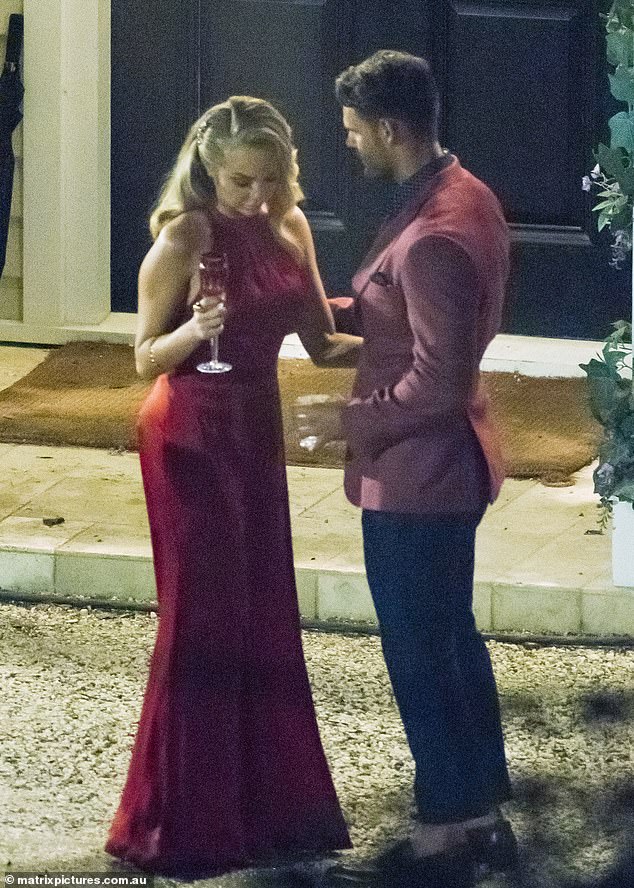 Pink jacket guy is first date guy I think - will cross-check. Also need to find matches for these other guys: 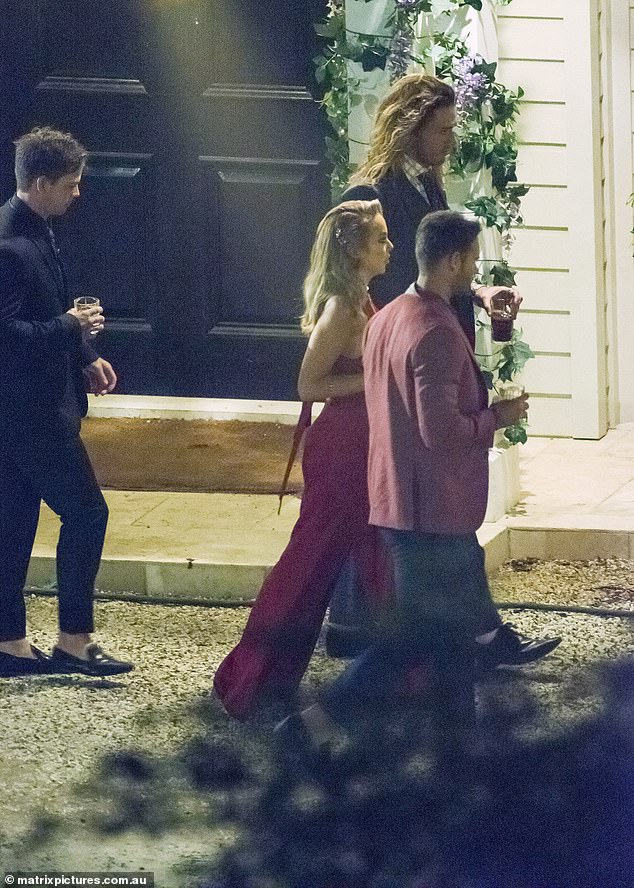 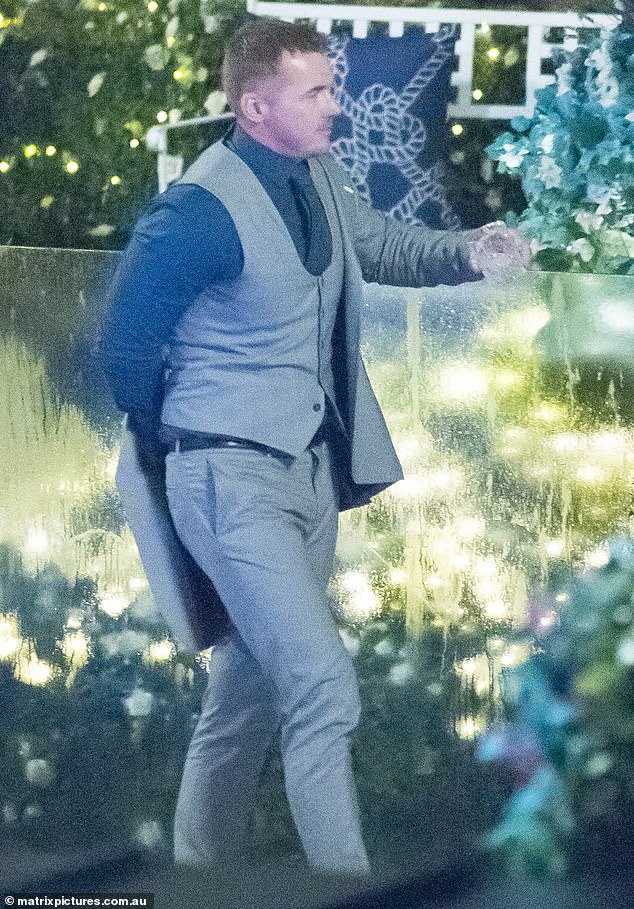 The article contains pics of this guy below as well.  DM's caption implies he's the one leaving but it's a completely different guy (NO BEARD!) wearing the same clothes.

What the heck is going on here?

Did Beard Man leave in such a hurry they didn't get enough footage of him so they chucked the intern in matching clothes, pulled up the hood and filmed him walking out??? 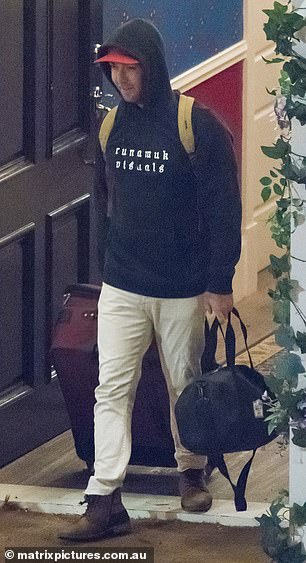 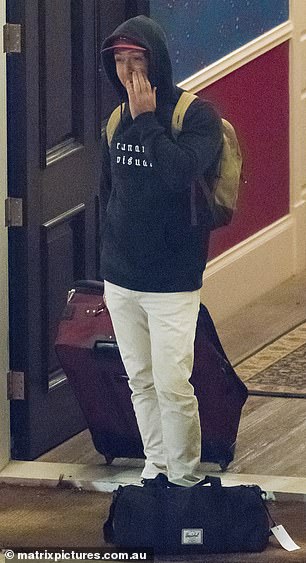 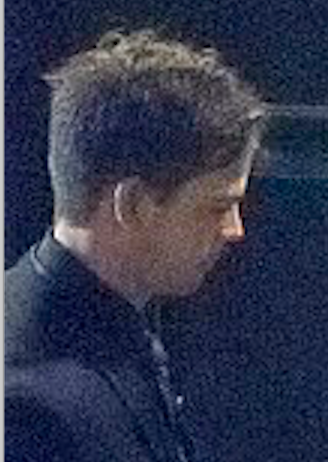 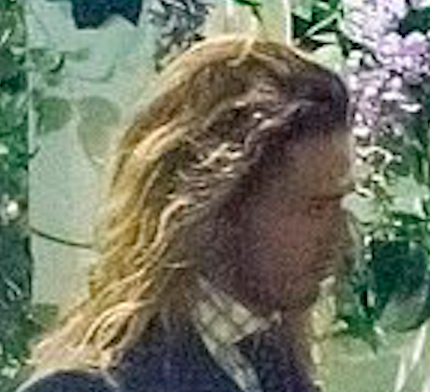 ETA: Is this Grotty Hair Guy? If so wow he should wash his hair more often

Can anyone match them to the guys who already have threads?

If not will set up new ones.

This is the second time Todd's name has been brought up in relation to Angie.  Does anyone still follow him on IG?  If so please let us know if he suddenly drops off the radar...

Will Bachelorette producers throw in some celebrity suitors for Angie Kent?
The new Bachelorette has her sights set on an all-star cast.
Australia's newest Bachelorette admits she's "never given love a go". But after eight years of being single "by choice", popular Gogglebox star-turned-relationship hunter Angie Kent is said to be relishing her new quest to snag a man – and has her eyes on a celebrity!
Sources tell Woman's Day Angie, 29, is so keen to find her perfect match she's urged producers to approach a number of eligible TV bachelors who've already piqued her interest.
"Angie was always vocal on Gogglebox about who she did and didn't like, and she sees this as a chance to make a connection with some of the guys she really took a fancy to," says a well-placed insider.
"Take Todd King from Ali Oetjen's season of The Bachelorette. Angie loved him on the show and thinks he'd be perfect boyfriend material, so she feels why not invite him back?"
Indeed, Todd himself has revealed he's attracted to the bubbly blonde. "I think if I had the chance to apply again [for The Bachelorette], I'd more so go for Angie's season because I like how she's a little bit rough around the edges," he has said. "I'm definitely a lot more attracted to Angie than I was to Ali."
Angie is said to be so committed to her search for love she doesn't just want one fellow reality star thrown into the mix – insiders say she wants a whole heap of celebrity singles to choose from.
Show bosses are said to be seriously considering the option, eyeing up talent from rival network Nine's Married At First Sight and other programs.
"Producers think it could be a great way to mix things up and keep viewers interested and boost ratings after the dismal Bachelor In Paradise and Ali Oetjen's Bachelorette season, which also bombed," says the source.
"They know it's something that's never been done before and it's right to do this season, given Angie's past and this being her third stint on a reality show, after I'm A Celeb…"
But while Angie is all for a reality show filled with celebrity suitors, it seems finding guys to go along with the plan isn't quite so easy.
"It's a big ask for a few of them, especially some of the guys who didn't have the most positive experience on their own shows," says the source. "Some were genuinely left heartbroken by their appearance on TV and others got a lot of backlash."
And those who do make the cut need to tick a lot of boxes if they're in with a chance of winning Angie's heart – she's been candid about the fact she has a type. "They'll have to have an epic sense of humour, not take themselves too seriously and also be true to themselves," she says.
Could The Bachelor be her back-up?
They're on their own separate "journeys" to find love, but at last week's TV WEEK Logies, fans were buzzing about how cute Angie and new Bachelor Matt Agnew, 31, would be together!
Calling him a "beautiful specimen", Angie says, "He's smart and funny and everything I look for in a man."

If he’s going in, it hasn’t happened yet. He’s bern posting on Insta with his usual frequency. I wouldn’t mind him being on again, IMO Angie is more his type than Ali. And if he F2’s again, he could then go on to be Bach, and be Australia’s Nick Viall