@GuardianAngel wrote:He's a winner in my books. I had a quick look at his IG which is private, and noticed he follows Rod Stewart Fans.

I'm so tired of the FIR pattern so I'm hoping he's not the F1. Can we change it up please? The Bachelorette seasons are so predictable now.

@just me You are correct. Nice catch!
He has a sister in law named Hannah.

Go to the link for the full story. 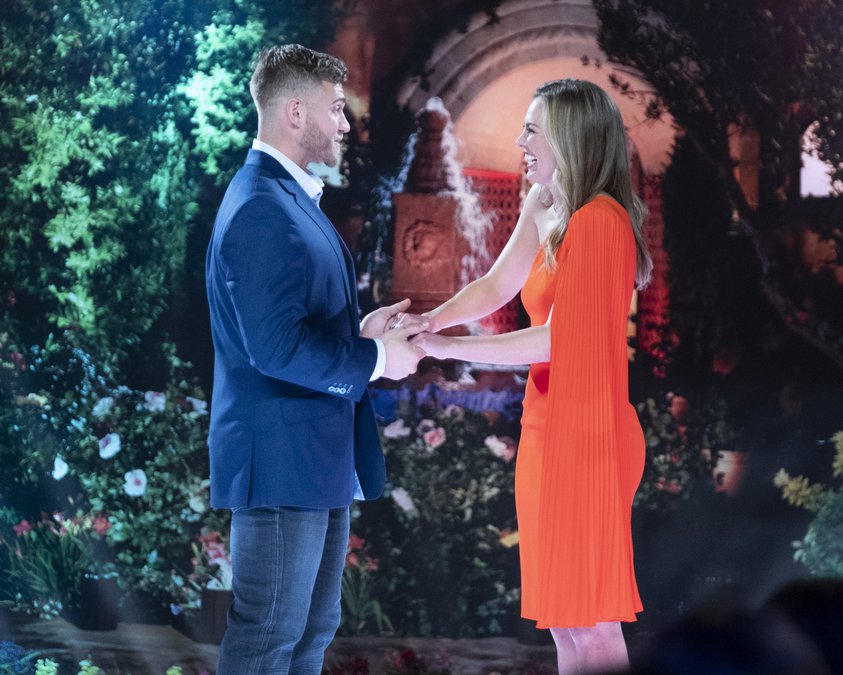 Luke Parker is hoping to turn Hannah B. to Hannah P. at the end of their journey on the upcoming season of “The Bachelorette.”

The show, which will premiere May 13 on ABC, is set to start filming this week, so Luke, a Gainesville resident, has already been sworn to secrecy and had his phone and all other forms of communication confiscated upon arriving in Los Angeles to record the show.

Hannah Brown, an Alabama native, is this season’s bachelorette, who was also on the just-concluded season of “The Bachelor.” When she was announced as the new bachelorette on the March 12 finale of “The Bachelor,” Luke and four other men who will be on the upcoming season met her for their first time on live TV.
“You are absolutely stunning,” Luke, 24, said as he met Brown and went in for a hug — all in front of a studio audience. “You are the only one that I wanted to be the next bachelorette. And now that I’m here actually holding your hands, in real life, seriously this is just blowing my mind and I seriously cannot wait to get to know you on a deeper level and just go on this adventure with you.”

Luke, originally from Ponte Vedra Beach, Florida, grew up playing baseball. He played at Polk State College in Winter Haven, Florida, then at High Point University in North Carolina and finally at Faulkner University in Alabama, where he ended up graduating.

He works for the family business, Parker Warehouse, an import and export company that has been around for 45 years, but he’ll be listed as an entrepreneur on the show.

There’s not much of a first-hand account as to how everything up to this point happened for Luke, but it’s safe to say he never saw it coming.

“This time last year, he went through a bad break up,” said Hannah Parker, Luke’s sister-in-law. ”I watch the show, so my husband and I were just sitting there and I was like, ‘I’m going to apply Luke for the show and just see what happens,’ thinking he had no chance of getting on the show.”

She filled out the application without her brother-in-law knowing and decided to let the chips fall where they may. A few months later, Luke got a call from some people with “The Bachelorette” and things started to fall into place.

“He and I had a conversation before he left and they hadn’t told him who it was going to be yet, but he didn’t want it to be anybody else,” said Mike Parker, Luke’s brother. “He didn’t really want to be on the show if it was anybody else other than (Brown).”

As Mike and Hannah did some digging online, they had a good feeling Brown would be the next bachelorette. But they still didn’t know for certain until it was announced March 12.

But the biggest surprise of all came on Monday, when the brother appeared on screen at the end of “The Bachelor.”

Wow! Great article. Thank you for sharing. Really excited about this possible match going to the last rose. I especially noted this statement in the article, "Brown and Luke actually went to the same church — albeit different campuses — when they were in college in Alabama" They never met until now- could turn into a real love story.

@bluwavz wrote:I'm so tired of the FIR pattern so I'm hoping he's not the F1. Can we change it up please? The Bachelorette seasons are so predictable now.

I might be the exception but I kind of like this FIR- plus all the spoilers. That way we can actually sift the real love story  from all the drama. They show us very little of the real thing - constantly trying to throw us off track. The "sleuthers" on this site are pretty good at looking for the real - not the fictional drama made to mislead. JMO

Sigh. So boring. Hopefully he surprises me because she clearly likes him.

She may like him but that does not mean he will go the distance.
Imo of course.

@nd4reality wrote:She may like him but that does not mean he will go the distance.
Imo of course.

True but FIR always equaling F1 in recent years has really jaded me. Especially when I never like the choice (Bryan A being the exception).

@nd4reality wrote:She may like him but that does not mean he will go the distance.
Imo of course.

True but FIR always equaling F1 in recent years has really jaded me. Especially when I never like the choice (Bryan A being the exception).

I guess the prior female leads were instantly attracted and the rest of the season only served to  validated their feelings.
It’s ok if Hannah doesn’t pick her FIR at the end. Or does. Either way she can’t possibly know for 100% who she likes for sure to walk away with on night one.jmo

ETA as I said upthread, she would have had familiarity with the guys she already met so I’m not surprised it was one of them that got the FIR.

Technically she gave two FIR, Luke and Cam, so I don’t think it’s that predictable. IMO.

I think the real one came from the M/G though.....Especially if you go by other seasons that have had the preview meetups on ATFR

@Aunties_Love wrote: I think the real one came from the M/G though.....Especially if you go by other seasons that have had the preview meetups on ATFR

But I don’t think they gave FIR at previous meeting, CMIIW