@Just Looking wrote:“Did Peter betray you in any way? If so, how?

He absolutely betrayed me. He interviewed for a reality dating show while simultaneously planning a future with me. I trusted him entirely and he pulled the rug out from under me. Also, if all of this wasn't bad enough, I've had multiple people reach out to me and tell me that he was seeing other women while we were exclusive.”    IMO, this doesn’t sound like a decent guy

We heard that she heard that he was seeing other women while they were exclusive. She’s just jealous and petty. Now that’s not hearsay, that’s just the truth, IMO.

Hearsay or whatever we want to call it, what the GF heard was supported by Kendall, who tweeted this: 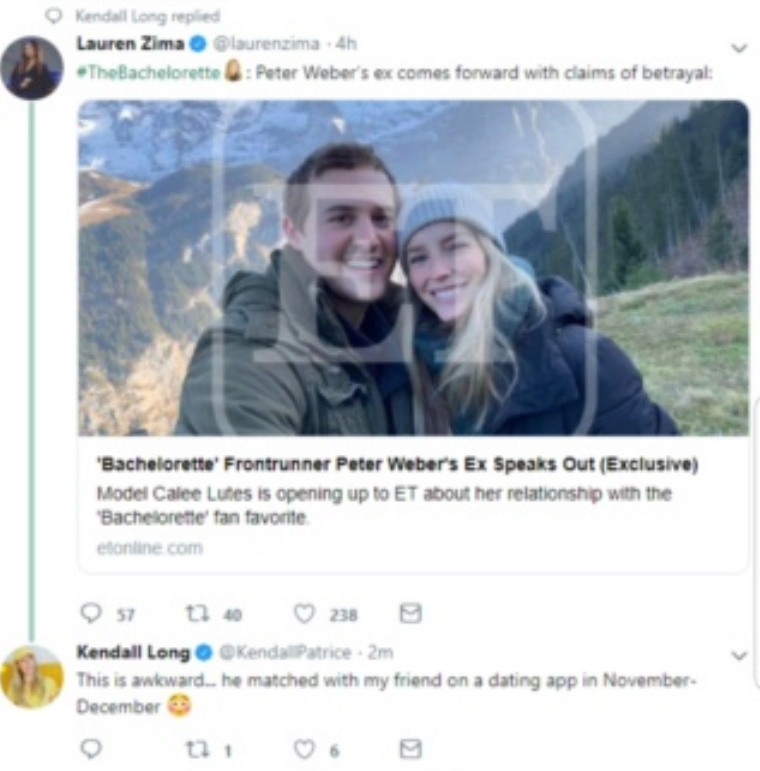 Kendall quickly deleted the tweet, maybe because TPTB reminded her of her contract, maybe because she was afraid that her friend might be called a petty jealous liar (whatever gave her that idea

The way Peter handled this breakup, and even if he didn’t cheat on his GF, he is just a calculated, cold-hearted opportunist with a pretty face IMO.
All JMO

Kendall wasn’t sure when that happened maybe it was even earlier last year. Or they weren’t exclusive when it happened, they only dated a few months.

I really don’t get what’s shady about him breaking up with her. He wasn’t even cast yet. I have never gotten the full reason why someone is breaking up with me and I have held things back as well when breaking up. He decided he wanted the show more than her, they never really had a shot, so he broke it off. This truly a non story. All iMO. But many guys wait much longer into the process to break up than he did but, he gets dragged for doing the right thing. I guess Guys can never break up with girls show or no show based on this. Imo

IMO what Peter did wrong was not break up with Calee sooner. If he was active enough to match on a dating app (no proof that he actually met anyone but still) then he should have just had the break up talk when he knew his feelings had changed instead of postponing it. It would have been best to have that talk in person. Because of his choices this was a messier breakup than it needed to be.
He wouldn’t have been confirmed as a cast member until late Feb or Mar so I don’t think the show opportunity was the main factor. Calee wouldn’t have had a story to tell if he just started dating someone else in March instead of appearing on the show. Her own new relationship may have started then. Who knows.
I think it’s fairly common for people to have a hot starting relationship that fizzles. I also think that many people need to acquire better skills when it comes to breakups. On Peter’s FSD with Hannah he tells her he hasn’t always done the right thing in relationships. I think that was said before they sat down for the FS card.
Bottom line though JMO is that Peter didn’t want to date Calee any longer. They were together for 5 months and broken up for 3 before he was confirmed. I don’t see him as calculated. He has no twitter. He doesn’t post all that much on IG. He’s back at work. Not much pointing to him milking fame at this point. That may change once he is eliminated but for now he is one of the most low key guys from the season. Jed was more active until the Haley story. Tyler has had a very visible presence. Luke is Luke.

He may have forgot about the match dating app durning nov/dec.. just because someone “match” him..doesn’t mean he knew she match!! JMO!
@notarose I agree!

Here is Hannah saying goodbye to Peter with her rob on.  This is off my tv at the moment in question.  I think this dark shadow has been photoshopped. 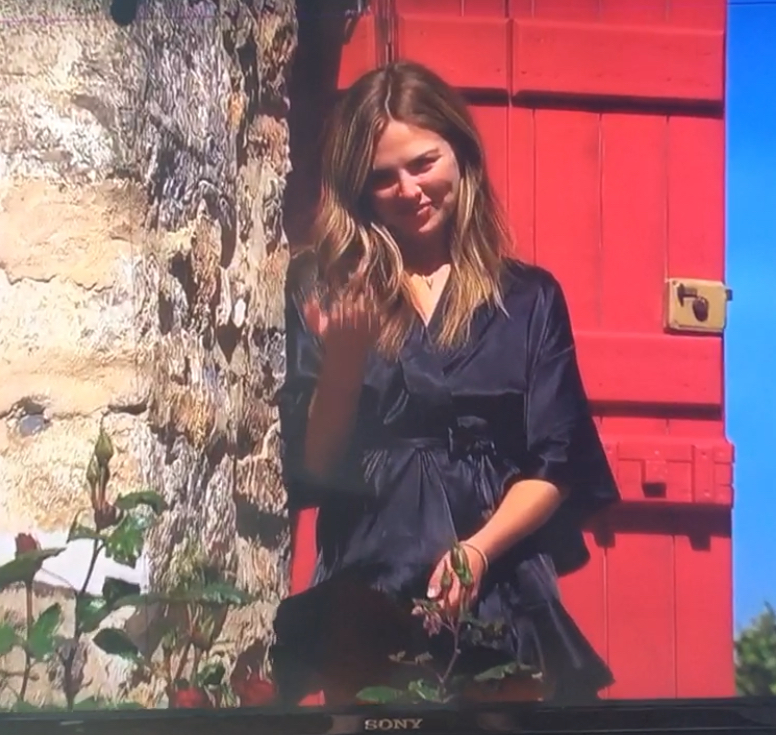 Here is a theory I heard on Another Bachelor Podcast where they said that Peter was a plant as a Delta rep on the show. I thought it was entirely possible, and may explain a lot about the abrupt break-up too.

@Doggoneit wrote:Here is a theory I heard on Another Bachelor Podcast where they said that Peter was a plant as a Delta rep on the show.  I thought it was entirely possible and may explain a lot about the abrupt break-up too.

I heard that Nick on the Nick files show said that Peter didn't sign up for the show, he was called by the show, but I don't know how true that is. We just have to wait to hear his side of the story after the show. This to me means, he broke up with her way before he knew about the bachelorette, he just wasn't feeling it with her. In addition, if she was such a wonderful blessing to him, his parent would have tried to reach out to her and reconcile them, his mom told Hannah, she was in need of a daughter.
I think she was bad/toxic for him( seeing how she is going around trying to tarnish his reputation), hence the parent emotional reaction at the hometown. JMO

Can someone make me a gift of Hannah and Peter, I need to change my Avi to my new fave couple. I think they are perfect together.
Hannah said, " Peter is so sexy, so great and so sweet, he is the total package of what I have always dreamed I will be with". Sound like F1 to me!

@Maggenzm Sure, is there any particular picture that you like?

ETA: I randomly chose a pic, if there is another one you'd prefer, PM me.

@GuardianAngel wrote:@Maggenzm Sure, is there any particular picture that you like?

ETA: I randomly chose a pic, if there is another one you'd prefer, PM me.

Thanks GA, that's perfect! I am staying away from social media because I want to stay unspoiled until the end, then I'll see if there is another I like better.

My friends are unspoiled and thinks she chooses Peter also.