Speculation on the Final four.

@sdmom wrote:Don’t know where to put this but I think it’s interesting to speculate:
For Rachel, two of the guys she met prior to M&G were in f4: Dean, Eric
For Becca, Blake f2

Now we heard Luke Parker received FIR. I wonder if him and Cam who received a rose at AFTR will be in f4?

On the wings of love... #TheBachelorette pic.twitter.com/VgJ9qKfWRc

That helicopter company is based in San Diego. https://www.corporatehelicopters.com/about/helicopters-san-diego/helicopter-eurocopter-astar-as350/
I guess a 1-1 date ?

@nd4reality wrote:It must be a 1on1 today. I doubt more than a couple of folk would fit into this helicopter.
Wonder who the guy is.

I’d bet he is really attractive and has the potential for next lead. We have had a large number of future leads who got 1on1s in episode 2. Scmiiw Hannah B herself right ?
So would the first two dates have been group dates then this 1on1 followed by the Second RC tomorrow ?

@Aunties_Love wrote:Wings of love saying.....could that be in reference to an individual date with one of the 2 pilots on the show since the last time that was referenced was for Jake's season and he was a pilot??

Here's the epi 2 schedule so far:

They still have one more advertised group date then the RC#2.  I will be posting a new filming schedule and filming chart soon.

Since there aren't many posts in this thread, I changed it to Clues F1/F2 NO discussion.

@sun20j2001 wrote:Im sorry but i havent seen anything that tells me tyler is the f1. A bunch of pics from public dates and making out dont automatically scream f1 to me. Especially when we don't have as MANY pics and videos of the other guys on similar dates. She could very well be doing the same with them. We really don't have much to go on..so far to come to that conclusion imo.

@sun20j2001.... there has been other dates posted as well & also eye witness acccouts from those dates. From the Group 4 Episode GD, eye witness account had Hannah paying the most attention to Luke P & Garrett. We also saw the public dates for both Jed & Tyler. IMO Hannah seemed more into Tyler based on their Episode 4 SDs. But we do have Jed’s HTD tomorrow so we will know soon how it compares with Tyler’s. Peter is the unknown that we have not seen & very well could be a surprise but the spoiler account claim he was not in the mix until the last minute but I am not sure I buy that yet.

RS claimed Luke was the front runner just at the start of Episode 4 & some of us don’t buy it because of a few things: not having two SDs prior to HTDs, being profiled front & center in 2 promos, having friends at his HTDs to do a meet up which has not been typical for F1s historically & also comparison of the little we gleaned from his HTD pics. He could very well turn out to be F1 but we are just waiting to see more proof to validate this. It is currently by deduction that some of us have Tyler in the F1 position but ofcourse nothing is absolute until we sleuth it out fully.

@sdmom wrote:I don’t get a strong romantic f1 vibe with Luke. Hannah could have at least shown some legs, IMO.

Then I remember how Rachel dressed with Bryan, and IMO, her outfits were sexier with Peter, so really, what do I know?

I'm not getting a romantic feel from these pics either.  Someone had to get a romantic on the water date since they're in Greece!

you were the one that taught me abiout these Bettes liking to show legs for their F1s. Regardless though I think the public date is not pointing to Luke as F1 IMO. I mean TPTB back in the day used to throw in helicopter rides for overnights....ha I just remembered JP & Ashley’s overnight date, that was something

I do think TPTB has gone el cheapo in recent years but the F1 overnight dates have been secluded...yeah happy to be wrong but I don’t see Luke as F1 based on all what we have seen so far .... jmho.

@alwayscooking...exactly, ya would think there would be some water / beach date considering the location

@smg2587 wrote:@bluwavz Thanks for bring the videos over.

Maybe its me but the last 2 videos Hannah seems closed off from Luke. He keeps trying to get closer but she seems distant from him. Just an observation I could be totally wrong, jmo.

Thanks Blu for bringing all the videos over...just want to note that in this particular video where she has her hands folded ...and in the last video where it looked like they were in an art gallery standing in one corner by herself before Luke joined her....body language not looking promising IMO but she does look hawt in her outfit

ETA...@smg2587...just saw your post & noticed the same...hope Lukey does not get the boot after the day portion

@Hawaii Girl wrote:Her body language has been way better on her dates with Tyler, IMO.

@Amberly wrote:I agree Hawaii Girl - could it be that she may really be into Peter and they are not showing us anything or
their dates are more private? The 3 that we have seen her with - to me - she has not been over the moon
with any of them - IMHO.  "No Stars in her Eyes" type of looks!!!

@alwayscooking wrote:Anyone else wonder how her overnight with Luke is going?

Actually I'm wondering if she sent him home before the night portion of the date.  Seems to be a common practice with Bachelortette's to let someone go early.  Seeing the video and pics today with Luke, gotta say there is such a contrast to her time with Tyler.  Hannah seemed so happy and the body language was definitely more affectionate with Tyler than Luke, of course from what we have seen so far. Heck even the door opening comparison that someone did was noticeable!

Looking forward to seeing something of Peter.  Interesting that the promo that's been put out shows the kiss in the distance without the suitors face. sleuthed to be Peter, which is typically a good sign.  My only concern is was Peter really suppose to be in the F4 or is he there by default because of what happened with Garrett?  I hope not, he seems like such a sweetie.

I maybe wrong, but it seems to me from watching this show year after year, that the first night edit usually shows a talking moment with lead at first rose ceremony with the Final One & the Final 2 guy doesn't seem to get shown talking with lead. Based on this, and known fact that Luke P was out at Final 4 leaving Jed, Peter, & Tyler final as final 3, Jed & Peter were both shown talking with lead, Tyler was not shown. So my theory is Tyler is out at final 2. Just hope Jed is final 1 at this point if Peter did ghost a girlfriend of over a year to go on this show. Can someone confirm how we know who Hannah was telling she was in love to, I've read it was Jed but didn't see him in that scene, somehow I missed how that discovered? 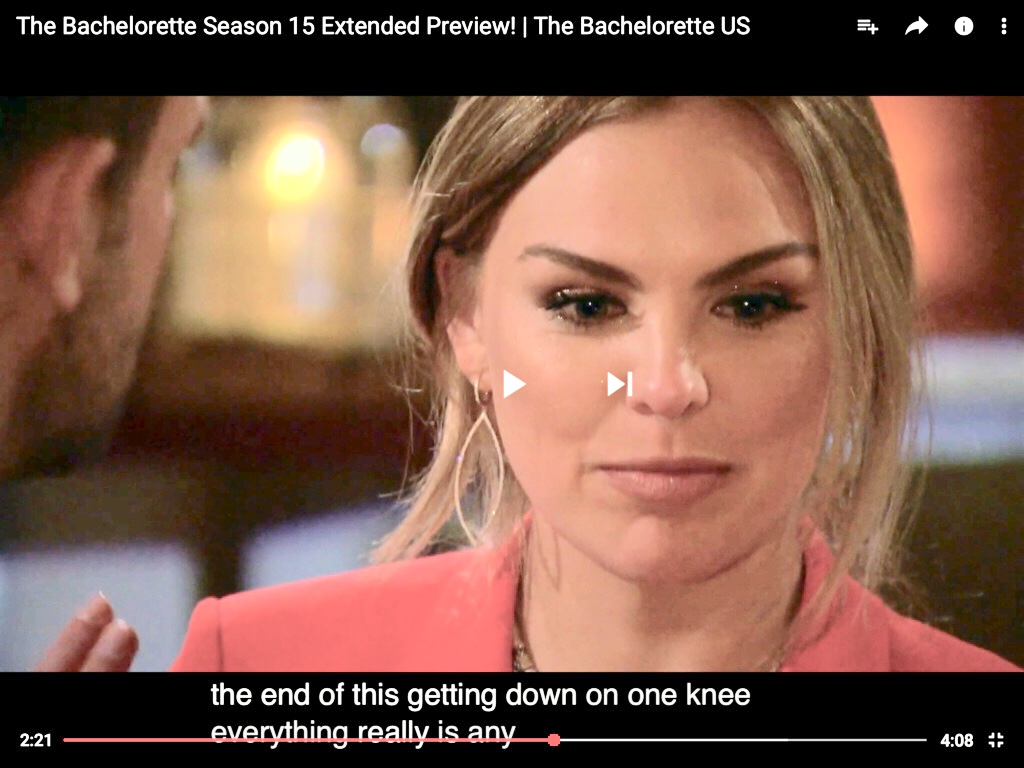 It’s talked about in SC thread.

@Luvstruck wrote:I maybe wrong, but it seems to me from watching this show year after year, that the first night edit usually shows a talking moment with lead at first rose ceremony with the Final One & the Final 2 guy doesn't seem to get shown talking with lead. Based on this, and known fact that Luke P was out at Final 4 leaving Jed, Peter, & Tyler final as final 3, Jed & Peter were both shown talking with lead, Tyler was not shown. So my theory is Tyler is out at final 2. Just hope Jed is final 1 at this point if Peter did ghost a girlfriend of over a year to go on this show. Can someone confirm how we know who Hannah was telling she was in love to, I've read it was Jed but didn't see him in that scene, somehow I missed how that discovered?

STATS ON NIGHT ONE TALKING WITH LEAD

Jed has a ring on. For future sleuthing purpose 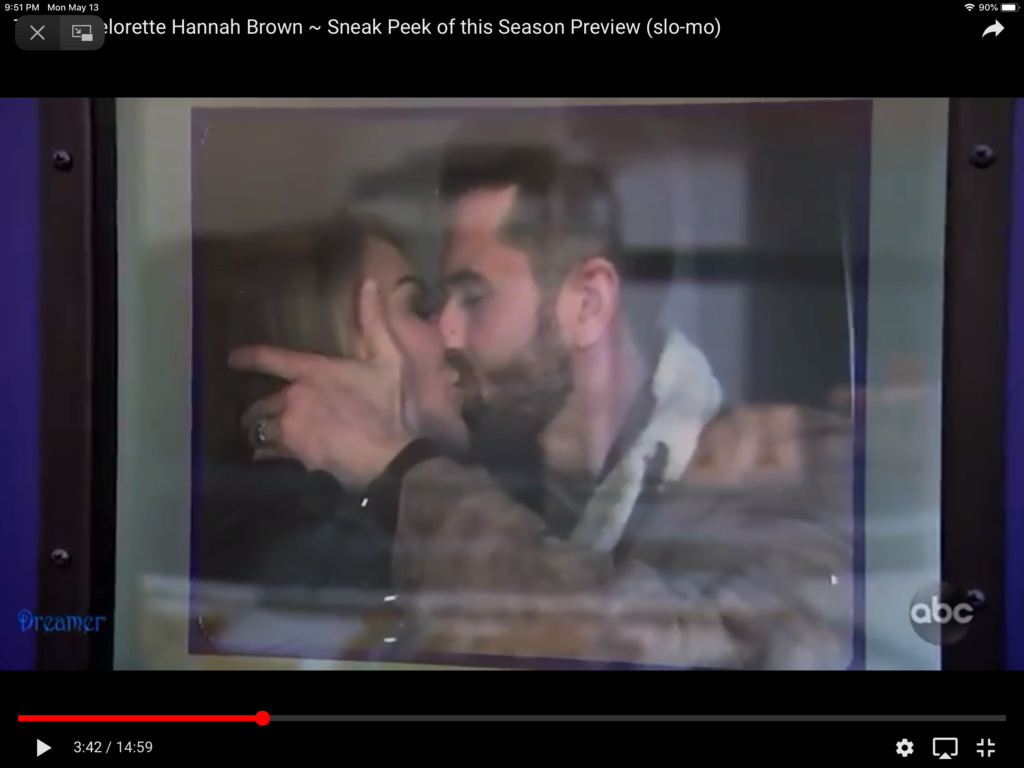 Also, when she hears the guys’ feelings for her. 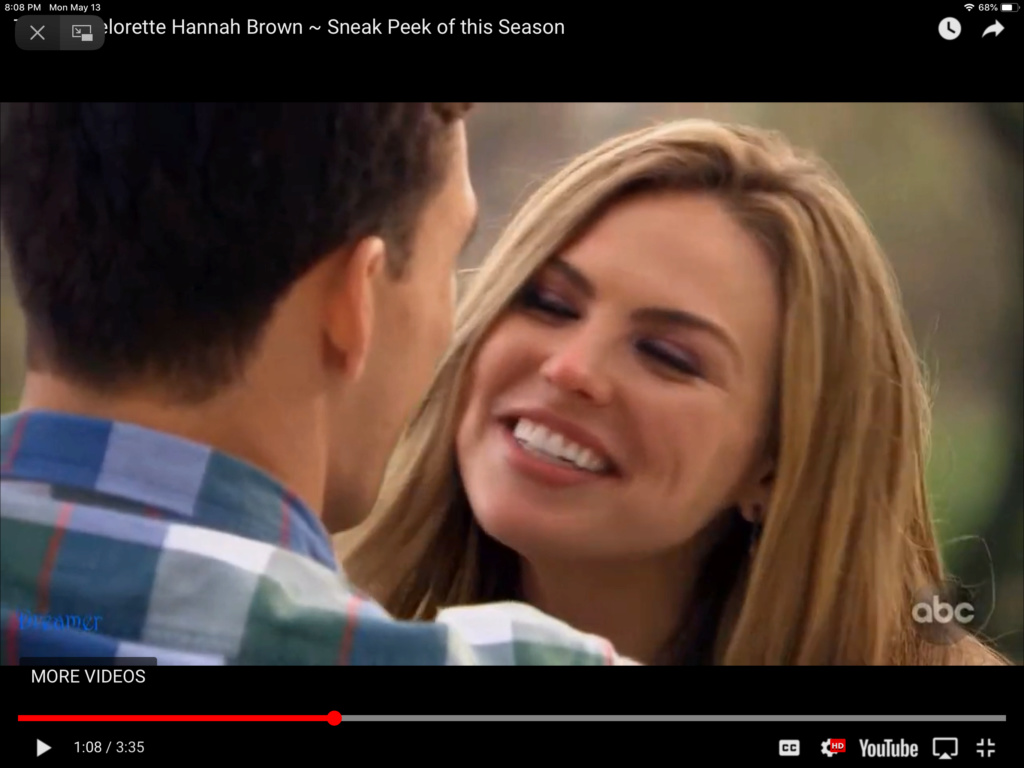 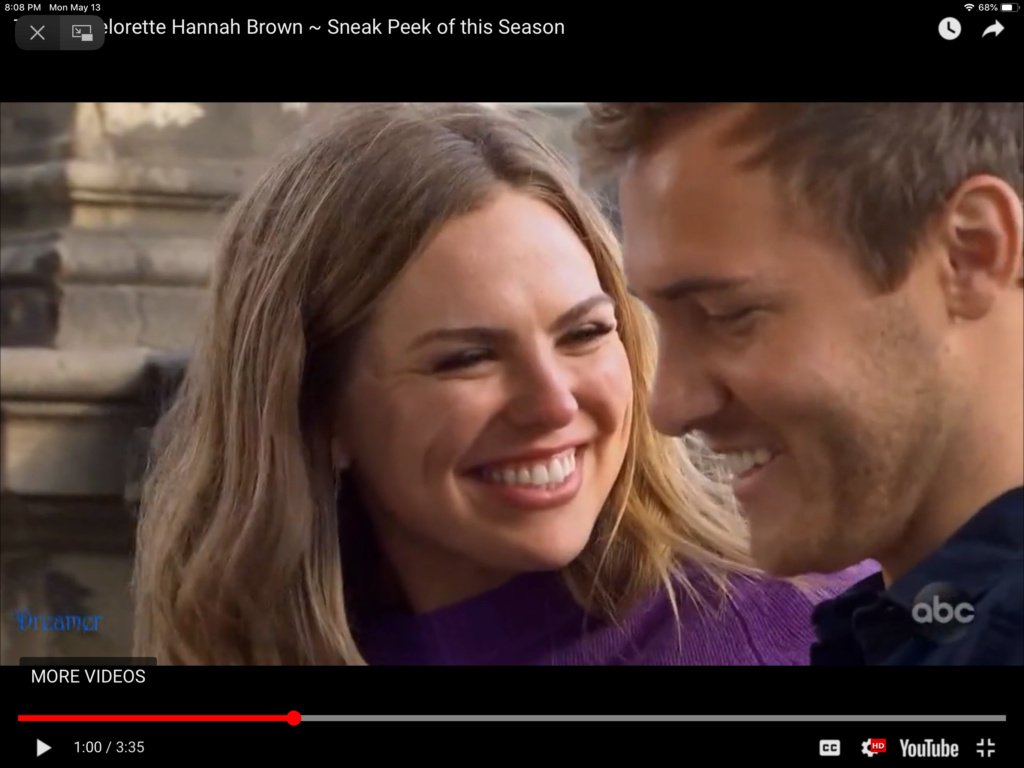 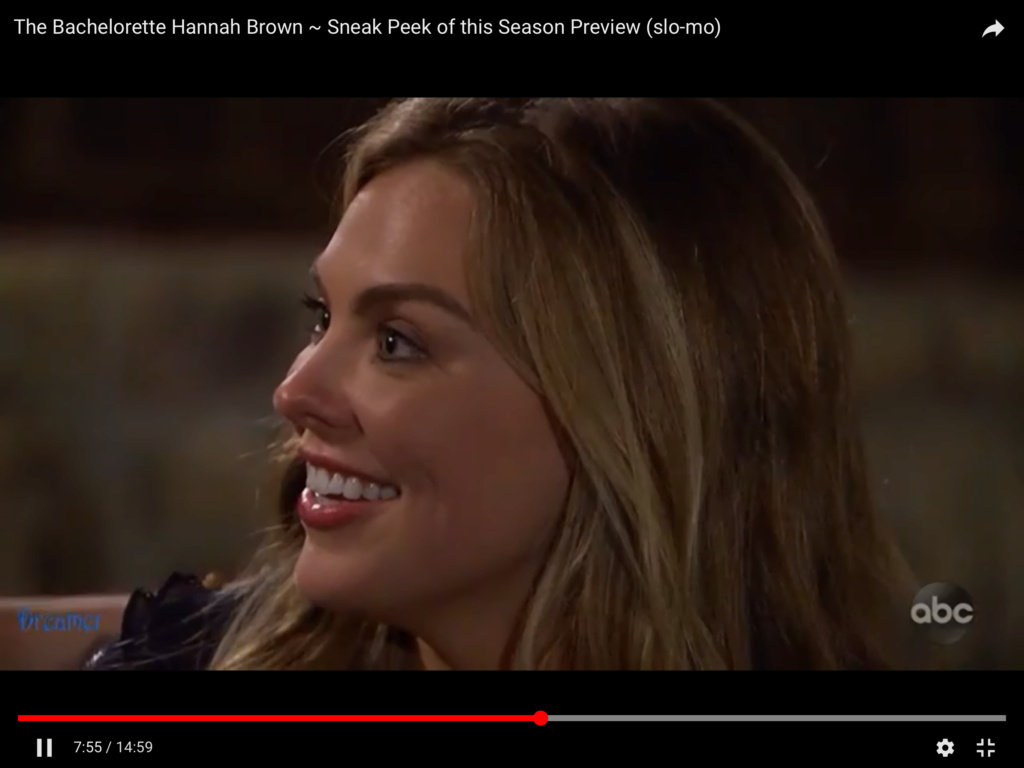 She seems very happy in hearing from all of them. I am not a BL expert so can’t tell which guy she has stronger feelings

@sdmom wrote:@Jolena that’s my thought too.
If she choose to date both in real world, she will be the first b’ette to do so, cmiiw. This can explain Mama Brown’s IG follows, and why Hannah has not made the “I am back” airport post (both Rachel and Becca did)

All Jmo, of course

@najpoziomka wrote:okay, so i might be reading too much into things, but in GMA Q&A with Hannah she states that her crush is Bradley Cooper, so it seems she is attracted to guys with beards (Jed), also she said her favourite fast food item is french fries from chick fil a and yesterday or today not sure because of the time difference from where i am at Jed posted in his IG stories that this fast food chain is the best as well

i think i might be going a little bit nuts.. i need the spoilers ASAP

In her access Hollywood interview Hannah says something to the effect of finding someone to build her and his dreams with. Tyler says the same thing in the season promo about building their dreams together.

Clue for Tyler as sleuthed by @smg2587 & myself....during Hannah’s appearance on GMA, build series & Idol, we believe that Tyler was following along based on his SM presence / absence during those times that we have SCs to back up.