@Jolena wrote:Does anyone know where Colton is and what he's up to this weekend? I saw on IG something about him presenting awards. Is it this weekend? where and what time ?  does anyone know if it will be on TV ? Looks like Cassie is with her sister and also with Caitlyn celebrating an early birthday for her ( I guess she'll be in paradise for her birthday) ,her sister supposedly has a meet and greet Sunday. Anyone have the scoop ?TIA

@Bachhh022 wrote:This picture is old but Cassie reposted it today and i thought it and the caption was cute...i think Coltons out of town right now im guessing she may be missing him

cassierandolph Kiss me, beneath the milky twilight

so is Colton in Denver atm? he posted a story about "home" ? they must be missing eachother a heap then because everything they are posting atm seems to be so deep and emotional?

Thats how it seems to me too. Ive noticed Cassie especially is not usually super sentimental when shes with Colton, shell post cute pics but it'll usually be a casual caption but a lot of times when hes out of town or away from her is when she starts posting sentimental things haha

@Jolena i was wondering that also. I hope that maybe Cassie will go with Colton to the critics choice awards.

Also if anyone lives near Mohegan Sun/Connecticut, theres a free QnA and meet and greet on June 22nd source: https://mohegansun.com/events-and-promotions/schedule-of-events/reality-check-presents-colton-underwood-and-cassie-randolph.html?utm_source=MSCTSocial&utm_medium=Twitter&utm_campaign=ColtonCassie&utm_content=RealityCheck

So true about Cassie and how she posts

you can tell she misses him. So where is the choice awards being held? If LA no reason she wouldn't go right?

Does anyone know anything about this "wango Tango" thing,that Cassie and Colton are at? I saw some tweets on twitter with fans saying they saw them there. Was this tonight? Where was it at? it looks like an arena of some kind.  :no idea:anyone? I thought Cassie was with Michelle at some event this weekend. I'm so confused with these two.

Wango Tango is a annual, big I Heart Radio concert (a lot of musical performers play at it) in LA. Colton and Cassie introduced one of the musical acts. So did Hannah B.

@suzq wrote:Wango Tango is a annual, big I Heart Radio concert (a lot of musical performers play at it) in LA.  Colton and Cassie introduced one of the musical acts.  So did Hannah B.

Thank you Suzq. Do you know When and what channel the Reality TV awards will be on. I read that Colton will be presenting.

ur not the only one! i can't keep up either hehehe but is there anywhere we can see this i heart radio concert??

| The two most precious humans you ever did see  @CassieRandolph @colton pic.twitter.com/AZkBu7uZHp

ur not the only one! i can't keep up either hehehe but is there anywhere we can see this i heart radio concert??

| The two most precious humans you ever did see  @CassieRandolph @colton pic.twitter.com/AZkBu7uZHp

I have no idea Leap. Maybe you can check Youtube tomorrow?

It's amazing how happy and all smiles Colton is when he is with Cassie. The past few days he looked so down and its obvious that he was really missing her.

Ashley catches up with Colton and Cassie. Starts: 22.00 min. 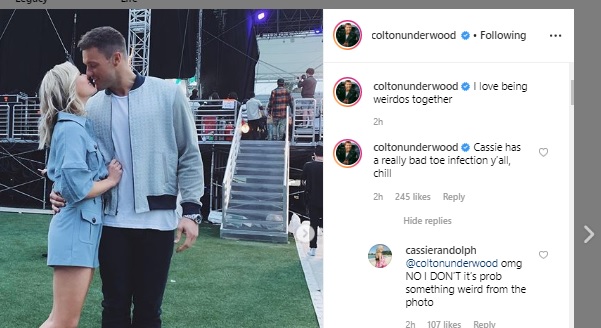 @Jolena. I don't know about the Reality Awards. Hopefully, they will be shown somewhere or at least more info will come out about them.

So many cute pics from last night!

I was watching the Critics red carpet live on FB earlier and didn't know if Colton would be on it , he never tweeted or put anything out on IG that he would be appearing on it , so I closed it down after watching it for about an hour and no Colton. Now I see on twitter that he was there , they did interview him (he looked so cute in his tux.

) ( evidently he was interviewed more towards the end . Does anyone know if Cassie was with him? Did reality TV win any awards ? Is there a video of him presenting? If anyone finds anything please post. TIA I'm so pissed that I missed it.

On the short clip that's on twitter when asked if he would do more TV and he said in the interview that he had some things in the works and was excited about it. Wonder what it is that he has in the works.

omgosh cassies ig story about her feet made me LOL

so whats the deal about her feet?