Sleuthing never stops! For those that have been around a few years, Jason, Ali, Arie, Des, Brad and many more where the spoilers were wrong. Jason and Arie in particular when something seemed off after filming and during airing. Ali who's spoilers went back and forth, Ali chose Chris, Ali is single, Ali was at a men's strip club she must single. Sleuthers found Roberto's work transfer. Brad 2, spoilers Chantel having TG dinner with Brad, sleuthers found the picture on Brad's fridge which was drawn by Rikki.

We've had a switch in the spoiled F1. That doesn't mean much to me. I like a lot of you felt he could be the F1 from editing, from Hannah's behaviour with him and so on. I still want to sleuth SHV's to confirm Jed is the F1 and to confirm whether or not they are still together.

Thank you all for your participation!

@GuardianAngel Thanks for the new thread. Hope we can stay on topic.

As for social media use today Jed has a tweet about coffee and Hannah had a few likes on Instagram. In case people where wondering Tyler took a picture with a fan this morning so he is still in New York and he hasn't been on social media today. Nothing else on that front.

We have a timeline for the possible, potential, first SHV here
http://www.bachandbachettefans.net/t5222-bachelorette-15-hannah-brown-shv-s-no-discussion-sleuthing-spoilers

Now can someone help me fill out the timeline for the potential, possible second SHV? @smg2587 ?

Hannah was in Mexico from when to when? This is confirmed because her IG story matched up with the resort BIP people stay: http://www.bachandbachettefans.net/t5226p264-bachelorette-15-hannah-brown-shv-s-discussion-sleuthing-spoilers-2

Hannah was spotted in Phoenix airport, Friday, June 14, around 3 pm PST, http://www.bachandbachettefans.net/t5226p300-bachelorette-15-hannah-brown-shv-s-discussion-sleuthing-spoilers-2#1386087
She has not posted anything current since then?

I couldn’t find the picture of Jed’s story where he posted a picture of the music tracks but someone pointed it was dated a couple days before he posted. Anyone?

They both posted throw back photos on Father’s Day.

No current stories since leaving Mexico. She had a story up on Saturday but we sleuthed it was the same dress from the Phoenix airport she was wearing.

Jed's last live stories where Thursday of him with a friend. The one he posted on the music board had the date June 12th on it.

@smg2587 thanks! Do you have a picture of Jed’s music? Or do you remember when he posted it?

The thing that throws me a bit off on Hannah’s Phoenix airport sighting is she traveled alone. If she’s on her way to SHV, wouldn’t her handlers be with her? Does the lead travel alone to SHV? Or Hannah stopped somewhere before SHV?

I can't seem to find when she returned. I went through a few pages but maybe not far enough.

@sdmom It's not unusual for the lead or F1 to travel alone for a SHV based on other airport sightings in past season's where they were alone. They probably have a car waiting for them or maybe their handlers pick them up. Not sure but we do know where ever they stay it's fully stocked with everything they ask for.

@GuardianAngel she was spotted in Phoenix airport on Friedan June 14. http://www.bachandbachettefans.net/t5226p300-bachelorette-15-hannah-brown-shv-s-discussion-sleuthing-spoilers-2#1386087

Does anyone think Hannah’s Instastory of her in Mexico saying when she is stressed she throws bread at walls correlate to finding out about the rumours and people article? I wonder if the Phoenix airport sighting/trip was unplanned and an emergency shv? Wasn’t Hannah’s turn around time in Mexico extremely short? Didn’t folok think she would stay for the BIP wedding? I also think strange that Hannah’s brother suddenly started to follow Jed on sm but then unfollowed him recently.

@Loulou I think you are onto something. It seemed as though something had to set her off for her to send that photo, and it felt odd that she was in Mexico yet left before the wedding. The timing would be about right for tptb to let her know that the article was coming.

Of all the things I've lost, I miss my mind the most. - Ozzy Osbourne

@Loulou the only thing I will add was that we thought Hannah would be in Alabama June 16-18 per her tweet to Alabama football. @smg2587 and I tracked flights out from Phoenix airport last Friday and there was no direct flight to Alabama that we observed.

I think she was throwing bread and frustrated because of the 1 on 1 she had with Luke that night on the episode. I could be wrong, but who knows. 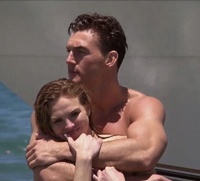