Demi uses "like" as every 3rd word in a sentence. It's driving me buggy.

@GuardianAngel The weather isn't in our area. I have to watch on ABC since City doesn't air the Tuesday episode till Thursday, so it is in their area. They have repeated the same thing for 20 minutes. I don't know why they can't have a track running on the bottom or top of the screen to warn people.

If I am stuck in the bathroom or closet, I wouldn't be watching TV. I'd just be checking on  my phone.

@Sprite oh. I'm on ABC too because City doesn't air Tuesday nights but I don't see any weather warnings.

Chris's chyron "Hoping this is it" is hilarious!! 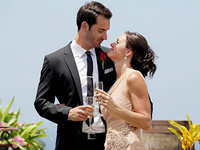 Nicole is delusional if she thinks Clay will propose after less than 3 weeks together. Especially since he was with Angela for 8 months and never said he loved her.

Connor and Whitney could end up being the successful couple from this season. He knew he wanted her to arrive. She only wanted to go out with him. They had time together away from cameras in a swanky hotel to get to know each other!

Post show SM will be interesting for the couples that end up together. The reunion was filmed so early, there is a lot that could have changed between then and now.

I can't believe that the producers didn't encourage Connor to wait a little longer for Whitney. I thought that was kind of mean although they were able to have more one-on-one private time the way that it happened.

IN A RIVETING CONCLUSION TO AN ADDICTIVE ROMANTIC SEASON, FOUR COUPLES FACE THE ULTIMATE QUESTION: WILL THEY SURVIVE OUTSIDE PARADISE?

WILL THEY BREAK UP OR FIND THEIR HAPPILY EVER AFTER?

ALL IS REVEALED ON A SPECIAL THREE-HOUR SEASON FINALE OF

Who Will Be the New Bachelor? Find Out on This Special Night of Romance and Drama

“607” – In a moving and stunning three-hour season finale, Chris Harrison and a studio audience watch as the four remaining couples – Demi and Kristian, Chris and Katie, Dylan and Hannah, and Clay and Nicole – spend one last night in the fantasy suites deciding if they are ready to take their relationships to the next level outside of Paradise. No one knows what the night will bring to these love-struck couples. Engagements, breakups and plenty of tears springing from both joy and heartbreak make for a compelling season finale to “Bachelor in Paradise,” TUESDAY, SEPT. 17 (8:00-11:01 p.m., EDT), on ABC. Episodes can also be viewed the next day on ABC.com, the ABC app and Hulu.

For one couple, the overnight date proves to be too much pressure, and talk of their future together causes the man to leave and the woman to be left devastated. Is there still a chance for them to reunite and have a happy ending? The other couples greet the daybreak with a mixture of excitement and anxiety. Who will leave engaged and who will leave Paradise heartbroken.

When the Paradise residents reunite with Chris Harrison in studio, tensions will be at an all-time high. Will Christian and Jordan make amends or explode in another argument? How will Blake and Caelynn greet one another after their very personal confrontation at the beginning of the season?

Happy Paradise alumni couples Chris and Krystal Randone, Tanner and Jade Roper, and Evan and Carly Bass return. There is some exciting baby news, and what a story Jade shares about her recent birth at home!

In one of the most heart-wrenching split-ups, Tayshia ran after John Paul Jones after breaking up with him, only to have him say goodbye. What has transpired since that emotional day on the beach? One engaged couple will try and repair their rocky relationship right in front of the audience. Another pair looks like they will have their happily ever after, and yet another couple has a very special surprise in store.

And in one last surprise, the identity of the new Bachelor will be revealed!

@GuardianAngel wrote:@Sprite oh. I'm on ABC too because City doesn't air Tuesday nights but I don't see any weather warnings.

I think it depends where you get the signal from. I would think yours would be Buffalo and I think ours was Detroit. I missed almost half the show...not that I apparently missed much.

@Sprite what kind of weather warnings were you getting? Because it was hot and sunny all day in Ohio and lower Michigan.

@HavaDrPepper wrote:@Sprite what kind of weather warnings were you getting? Because it was hot and sunny all day in Ohio and lower Michigan.

Tornado. They said there was thunder and high winds and that people should go to their basements. They were even discussing roads the storm was heading down.

I really should have paid more attention where it was, although the ABC channel is based out of Detroit.

I see after a google search that the tornado warnings were actually in the Saginaw/Flint area which is a couple hours north of Detroit. I knew Detroit weather was fine... I have friends that live there so I was confused.

I still hate the way they end this show by forcing everyone to decide whether to make a big commitment or leave. I think that's partly why Chris is having so much trouble with it and also Tayshia. The thing is, that they're probably better off to just leave together and forget the engagement. It was never a good format for Clay from what we've seen about him. He's just not going to be rushed into declaring love and making a commitment this soon and normally that's a good thing, unless you're on BIP.