I think the judges are definitely harsh scorers on some of the contestants.

I think the judges are holding closer to ballroom moves, something I like a lot as I feel the choreography has "ad libbed" a good deal over the past several seasons.

@suzq wrote:I think the judges are definitely harsh scorers on some of the contestants.

@mercieme wrote:Yikes, they so dinged Ally for not having more traditional cha cha content, the judges are gonna be so strict this season I think. @Sprite Ally is part of Fifth Harmony pop group, same as Normani from a few seasons back.

Thanks, I saw that after.

I hope they are strict this season. I think one of the reasons the scoring has been so all over the place is that they didn't stick to judging proper techniques.

And their first dance is to the Spice Girl.

He is stiff and clearly can't dance, but at least he seemed to have fun with it.

Oh Sean, got to give him props for his efforts.
And now we know what James has been up to all these years, his kids look very close in age.
Ok good scorers come for James based on these judges comments, his hold was really good.

James' kids are so adorable.

Not sure I like the dark hair on Emma.

I am impressed by James! He will go far. If he keeps this up, I suspect he will win.

Yep highest scores for James, he really stayed in character throughout the dance, well deserved.

I ended up watching just to see who the partnerships actually were. All were as I thought.

Overall, it was a decent show. I think the scoring was mostly consistent. I was surprised at Sean's score since I thought it would have at least one 3 in there.

I feel sorry for Lauren... at one point in her dance, I was like where is she because all I saw was Gleb. That is what I don't like about him, he tends to hide his partner at times if he has choreographed something they are not good at. He just doesn't choreograph to their strengths which is where Cheryl and some of the other female pros shine. They highlight what their partners are good at. Gleb also couldn't even go one night without using other dancers and it confused me because he had 2 girls up there. There is only one "extra" pro so they brought someone in just for his dance (didn't appear to be any of the other pros to me). And, then there is Val... using a prop. Never fails.

@Sprite I think they moved Christy over to that table for that time only. They had Bobby at the table before Lauren's dance. If they keep the audience setup like that the whole season, I bet that table will be used for people in the audience they will highlight for dancers like they did tonight. It is right there next to the judges and a good place for Tom and/or Erin to hang out during the dances.

On a side note, I follow Dylan on IG. He posted some stories of Demi drinking out of a bottle in her purse during the show...

I thought Hannah did very well. Alan is a pro who will adhere to the tenets of dance and not ad lib as much so she'll learn proper choreography. Emma is one of my favorite pros also and I'm glad she got James who was amazing. Karma is a B. Just look at Spicey. Good to see Lamar Odom looking well and not a Kardashian in site. The show went quickly and had a lot of good humor. A nice respite from all the news of the day.

I thought Hannah had exceptional stage presence for being the first up - she sold us on the dance. I was surprised Alaina scored only 1 point behind! The men are the contestants to beat this season!

I'm a longtime DWTS fan. I thought that Hannah did a great job. She didn't seem any more nervous that any celeb would be on the first night. I loved her red dress! I think the DWTS audience will be as charmed by her as the Bachelorette audience was. 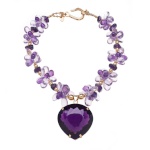 Hannah is being liked by DWTS fans who have a dislike for the Bachelor franchise from what I'm seeing. The big reason is the fact she can dance. Maybe if MF had let some of the other 'ettes (like Kaitlyn) go on the show, those fans would not feel the way they do about people from the show. Instead they were stuck with guys that couldn't dance and the franchise fan base carrying them too far into the show. That turned a lot of them off. Of course, they don't like Disney kids being forced on them either!