@AllAboutLove wrote:@Bobette I need to watch the trailers again as well. Kurt only being shown night one is so bizarre. I barely saw him in episode 2 either (where was he at the cocktail party??).

On the couch.  He looked pretty schmick (but has terrible posture 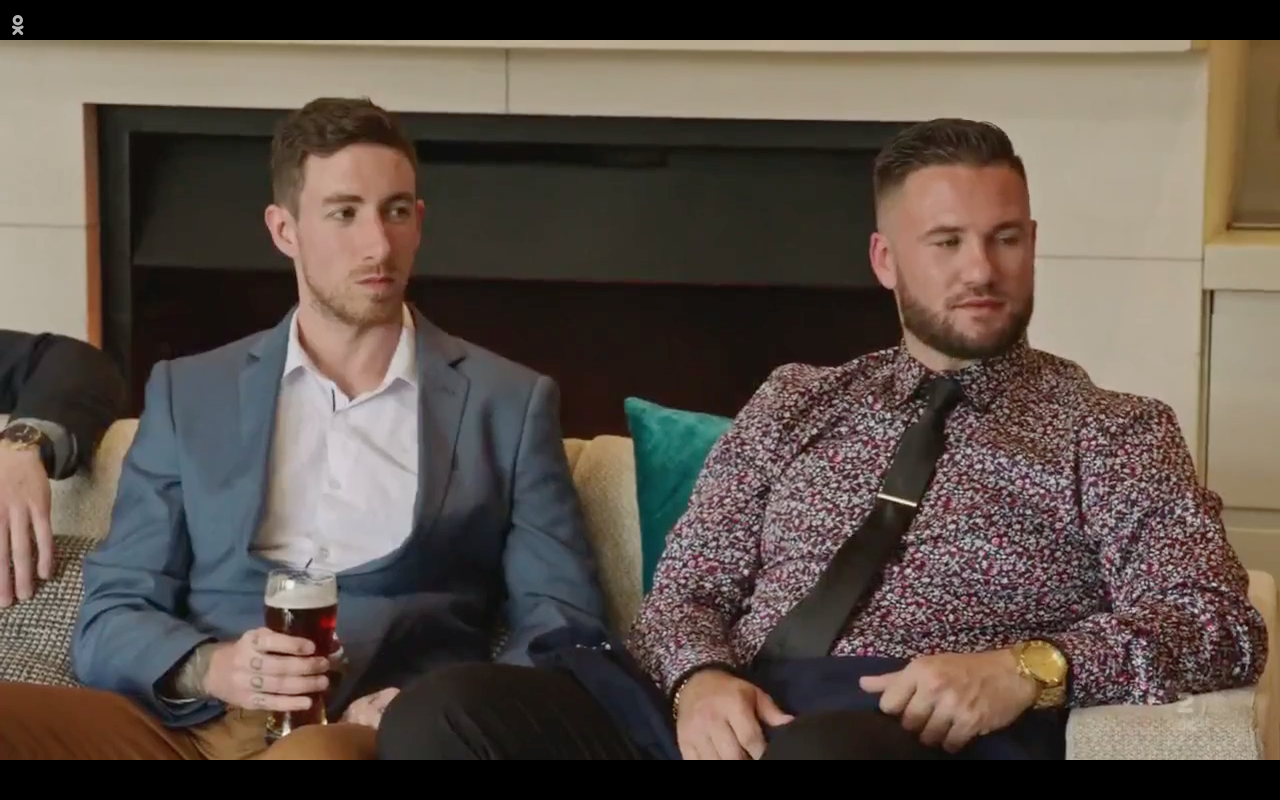 Quinn and Flynn's outfits were the best of the night IMO - very dapper. 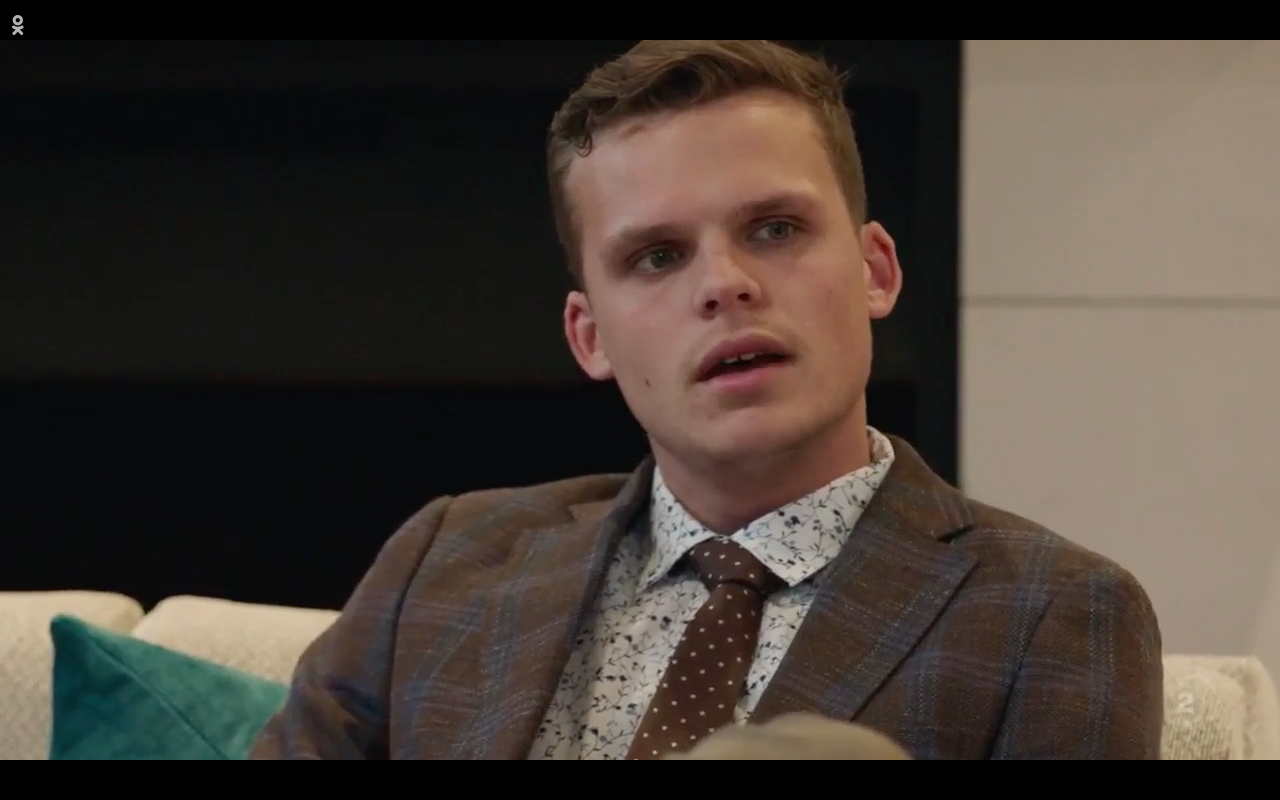 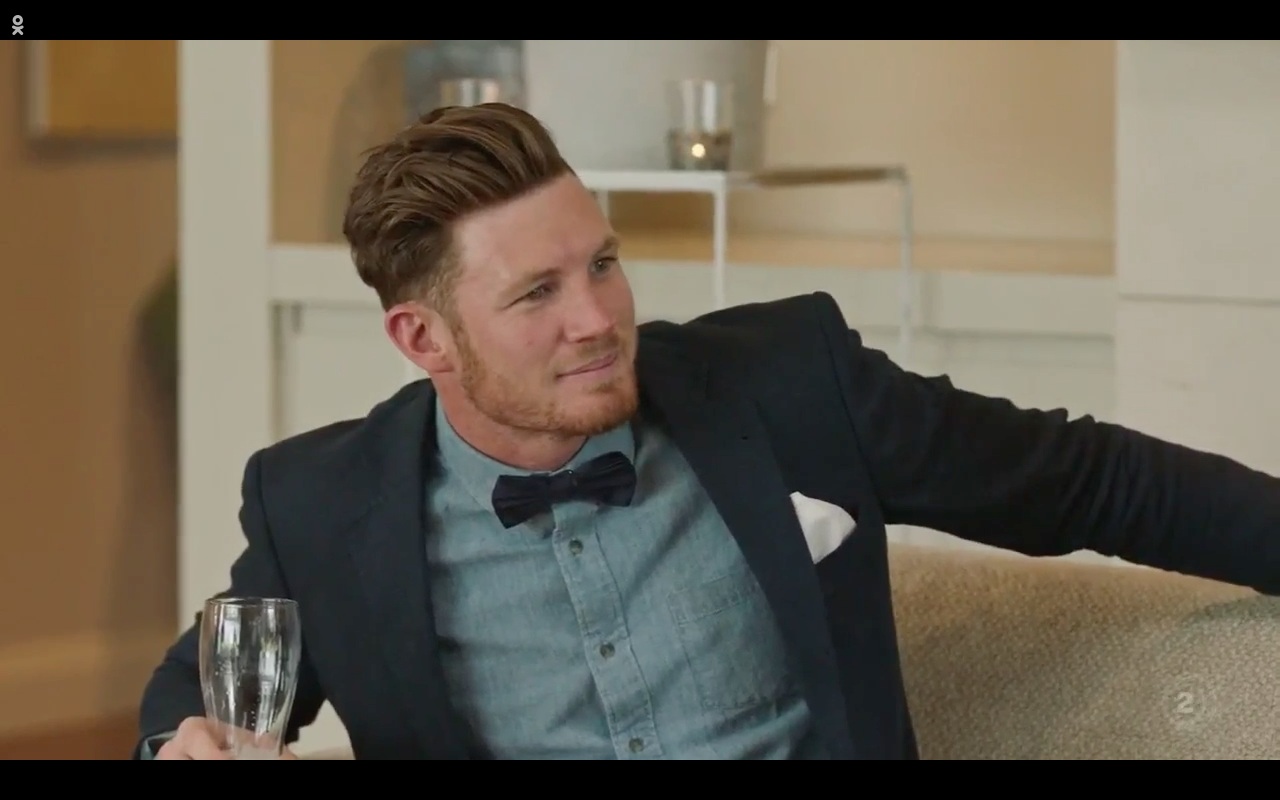 @Bobette yup, those stats prove what I was saying earlier, that the F1 is usually shown a lot in the season preview, especially in the early seasons, the F1 is shown the most

It's only later seasons that the F2 is shown close to the same or a bit more but overall, BetteAU season preview is mostly the F1.

It's why I am a bit suss on why they'd hide the F1 so much for Bette NZ's season preview if it's Kurt. No need to do so. The F1 for Bette AU was shown a ton in first episode AND the season preview. Both. Think of Lee, how much more he was shown than Matty J first ep. MattyJ was basically MOT in his M&G red carpet and NO chat shown, compared to Lee who had Intro and voice over when arriving, ITMs, chat with G shown, M&G, and the FIRST one to get the rose at the rose ceremony (like Aaron did).

IDK. It's all odd to me that they'd make an F1 invisible. Where's the dates and screencaps showing Kurt goes far? None of Kurt for season preview with him and Lesina other than night one? Maybe it's their new way of doing things. But it's odd to me.

I'm busy recording the season preview and will post it on here so we can see screencaps along with voice over and what is being said in the preview. Will post soon.

@AllAboutLove Don't want to take this O/T but ITA, no way Matty would have been F2 had Courtney not left and they had to do some major scrambling to make him look like a viable option IMO.

It could be a new way of doing things - the complete hidden F1 for the surprise ending?  That can backfire big time though IMO if not enough is shown during the episodes (maybe that's my the emphasis on their first night spark?)

Bette's on a different channel to Bach NZ so probably a new production team too?  Still might be worth comparing to the Bach NZ season previews (I do enjoy comparing statistics on this show

@Bobette I don't see Kurt first episode being any more F1-like than any other contestant getting first night shown. For comparison's sake, looking at an earlier season (not Sam's since she gave her FIR to her F1), so G's season, Lee's intro video and entrance for comparison was far more F1-like than Kurt's. So was his edit ep 1 when he met G - it was the biggest clue for me he was F1 because of how Georgia reacted to him, him getting First rose at the rose ceremony, the season preview with him having so many screencaps.

But yes, it could be new production/editing who has decided this. But it's also odd to me that Kurt wasn't on the group date either for the second episode. Lee was (and got to sit on the horse with G, poor Matt D he was third wheeling and even said so). Also no chat at cocktail party shown between Kurt and Lesina for ep 2. If he is not on a date on Ep 3 then that's even more no screen time. Plus he got a rose, what 4th? 5th? at the first rose ceremony? Kind of odd. Aaron on the other hand received the rose first at the first rose ceremony (which a lot of F1s get the first rose at first rose ceremony).

So little of Kurt. Yet there's sooo much of Aaron. #perplexed

@AllAboutLove wrote:...snipped
But it's also odd to me that Kurt wasn't on the group date either for the second episode.

So little of Kurt. Yet there's sooo much of Aaron. #perplexed

That's a really good point - F1 is always on the early GDs, that's one stat that rarely wavers. It's a head scratcher to be sure.

@Bobette yeah it was like he was MIA on ep 2 and in the season preview. Odd

@AllAboutLove One more thing that I wanted to note...

Aaron is shown in two states in the preview: 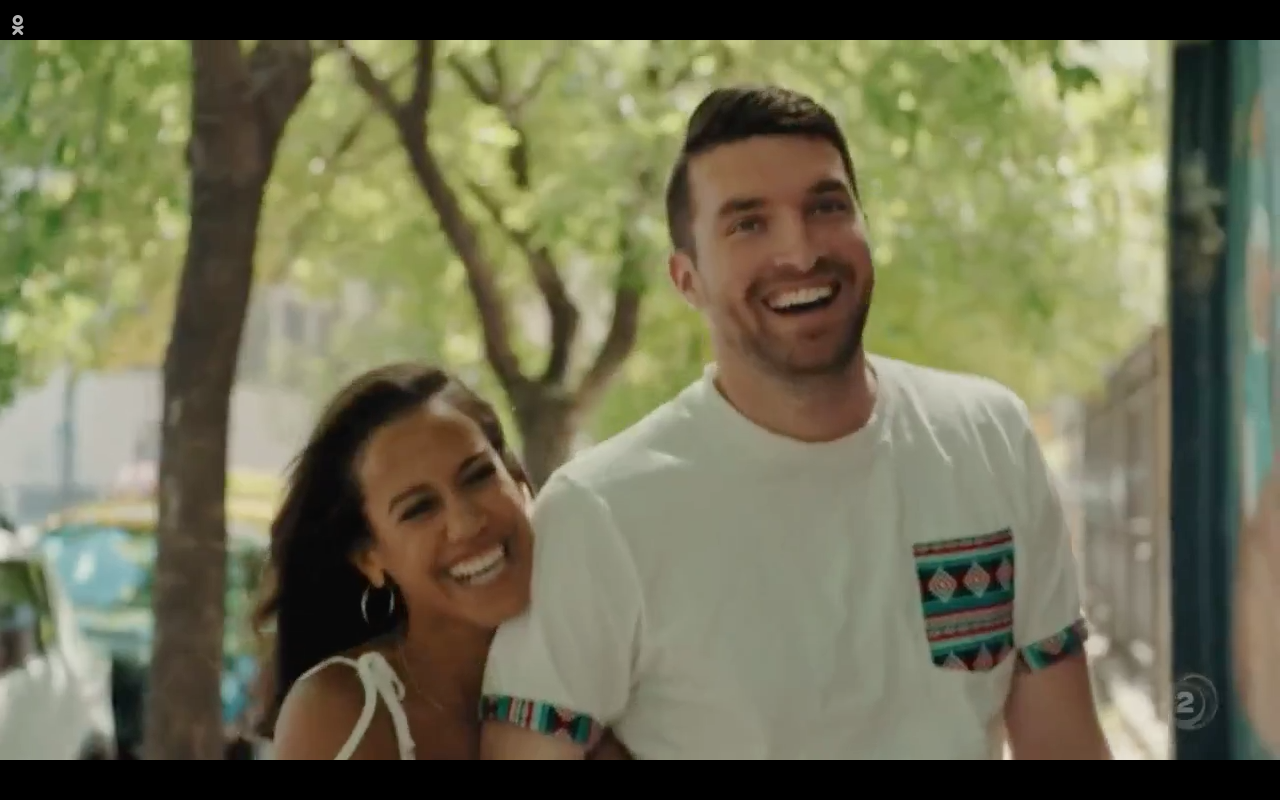 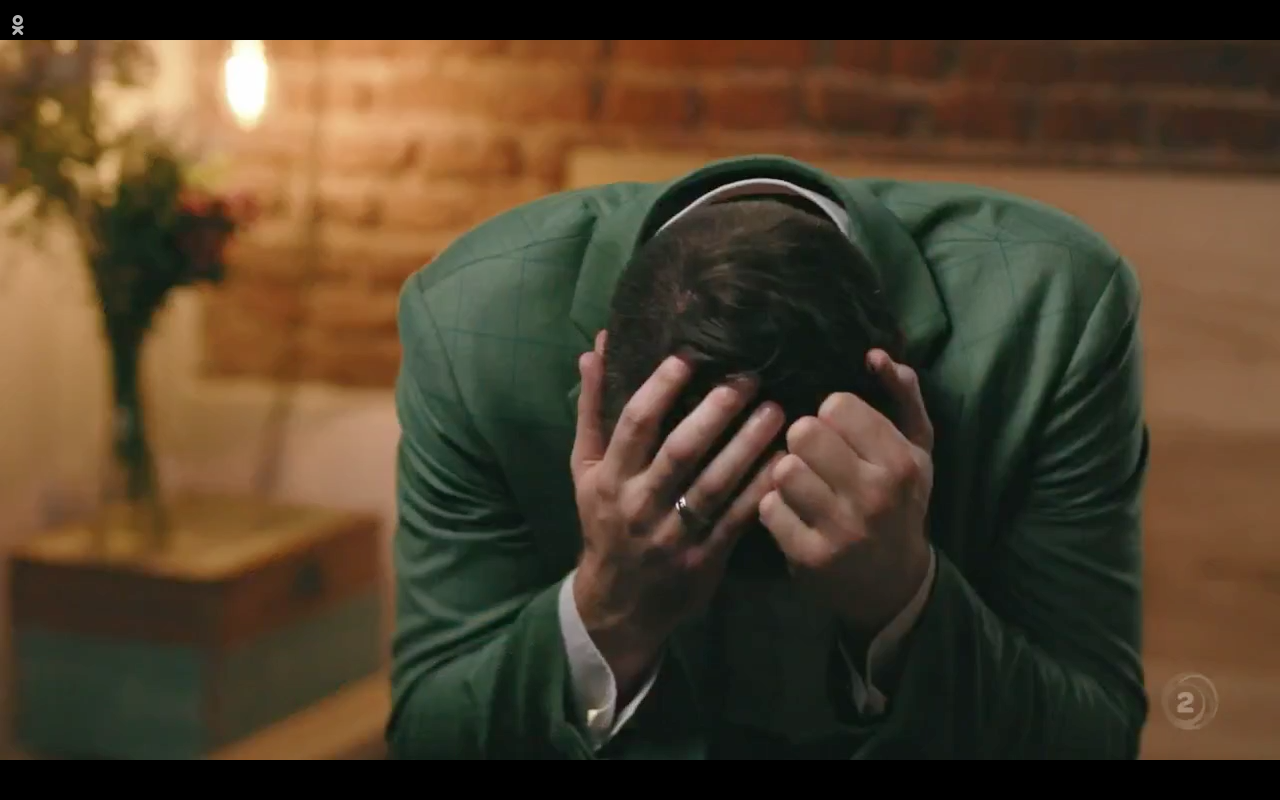 The fact that they show him stressed suggests F1, BUT they don't show his face, so not many people will know it's him.

So are they hoping people will figure it out, assume he's not F1, and then BOOM surprise suckers he is?

Or, are they hoping people won't guess and just used it because they didn't have much angsty footage?

Interesting.  Maybe it's just the NZ way to hide the main contenders?

Okay so this screencap of Kurt is from later on? He says "I'm feeling shattered" (could be vo for the first bit but he definitely looks downcast)

Could be he is saying he will feel shattered if he doesn't get picked etc.. so a misdirect. In the clip he definitely seems low energy. Contrasted to Aaron above where he is clearly seeming stressed out (faced not shown which is a typical F1 thing to do).

@AllAboutLove @Bobette Ladies, I am dizzy with all these back and forth theories!

A thought, we know they are lurking around here... and maybe they are changing their style to prevent too many spoilers?
Also, another thought, it sort of reminds me of Hannah B with Tyler, he had a strong presence but was kind of hidden in the first few episodes, and that’s because when he was with her it was so obvious, that they had chemistry, they needed to pace the progression to not obliterate the REAL F1 who, no one really saw that much going on with.
So, maybe the communication and body language is so natural and good, that they have to hide some of it to continue the show and exploit the various characters. I’ll watch the #2 tonight and see what I think then.

@Bobette it could be (regarding Aaron) that they are showing that much of him in different ways. It's definitely frontrunner/contender status to do so.

With Kurt, it's hard to say because even with the stats for Zac's season, I assume that those include the F1 with the lead? So still SCs of lead and F1 in the season preview. Whereas with Kurt, there's no SCs of him post first episode with Lesina.

When the season preview and narrator goes into the "chemistry/romance" talk and connections we see new shots of: Logan, Tavita, Aaron (mostly Aaron) and Marc.
Nothing of Kurt and Lesina for future dates in that clip (maybe they're using the first ep cocktail party clip as part of it instead).

Then when the narrator talks about "heartbreak" and shown is: Jono, Kurt, Aaron, and Marc.

@Bobette But remember all the Bachelor series were produced by TV3, which is totally different from TVNZ 2, so it would be a different production crew. (Well mostly but NZ is pretty small!) And I also get the feeling they are trying really hard to be different and original and not follow traditional format with voice overs etc.
IMO I suspect maybe they are using the early episodes to introduce each of the F4's separately, Kurt Ep 1, Aaron Ep 2, Perhaps Logan episode 3, and someone else Ep 4, so the audience is invested in them all?

I think they are deliberately trying to throw of us, and having fun doing it, such as the yellow brick Lily road