@Bobette wrote:Sportsbet have narrowed the odds of Angie and Carlin splitting by Dec 31 to 1.35 - so they are even more sure of a split than they were he was F1.  Need I say more?

@AllAboutLove I was going to ask for a GD thread where we can post their break up announcement but they might split before this season even gets archived at this rate.

Bringing over info related to the rumoured post-show relationship contracts.  The Sportsbet odds suggest to me Carlin and Angie have already split and are putting on a showmance but will be interesting to note the timing of their break up if one is officially announced.

The Bachelorette's cash scandal REVEALED: Producers 'offered to pay contestants $100,000 to date Angie Kent for two years'... with a 'bonus payment for an on-camera proposal'

The Bachelorette has been hit with allegations of a payment scandal involving producers and the show's biggest stars.

On Monday, Woman's Day reported that the show's producers had told contestants they could score a $100,000 payday if their relationship with Angie Kent lasted for at least two years.

According to the magazine, the suitors could earn even more if they agreed to propose to the former Gogglebox star in the finale.

'They promised to pay $100,000 if the couple were together for two years and got engaged - and said they could earn even more if the proposal was on TV,' said a source.

The offer was reportedly made at the start of filming earlier this year, and served as 'extra motivation' for the men competing for Angie's heart.

The scandal is the latest to hit the series, after it was revealed a number of Angie's suitors had worked in showbusiness prior to appearing on the dating show.

As previously reported by Daily Mail Australia, front-runner Carlin Sterritt appeared in advertising campaigns and even films before applying for The Bachelorette.

In recent years, he has starred in campaigns for menswear brand Tramps The Store and also appeared in short films like Red Zone, Divided and Graveyard Shift.

Furthermore, he has a lead role in the upcoming Australian drama, Out of the Woods. 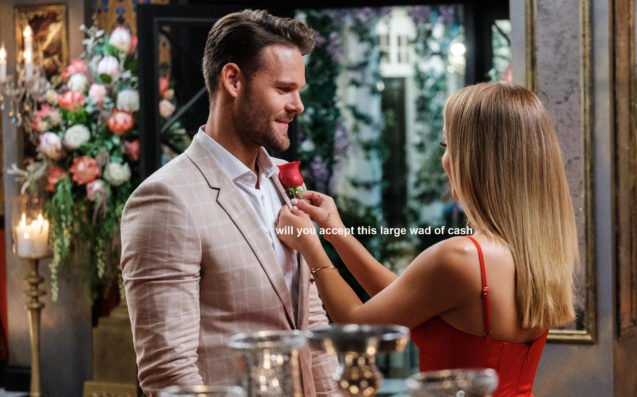 Woman’s Day is reporting that Bachelorette contestants were promised a whopping $100,000 if they won and stayed together with Angie Kent for at least two years.

Reasoning wise, if this is indeed true, I guess producers are  sick of these relationships fading out fast (Sophie Monk and Stu Laundy, we’re looking at you) and want something that at least looks legit.

I will be watching Angie and the eventual Bachelorette winner like a hawk — if they break up after two years and then he suddenly starts driving around a flash new car, I’ll be very suspicious.

Yeah pretty insulting to Angie if true but then again maybe they made her the same offer and she was fine with it.  If so, choosing an actor as F1 suddenly makes a lot more sense IMO.

There have been rumours of relationship contracts for years and after Nick's season Lead contracts would be a lot more binding IMO.  Nothing would surprise me with this show any more TBH.

@Bobette wrote:Just noting that Angie said on the Project she went against her contract by contacting Timm after the show - so that confirms something which has long been suspected (that Leads are not meant to have contact with anyone other than F1 post-FRC).

'I don't care about what you're not supposed to do!' The Bachelorette's Angie Kent reignites rumours that there's a 'contract' enforced on the winning couple - as she lets slip a VERY telling detail

There have long been rumours that Bachelor and Bachelorette winners are subject to 'contracts' that keep them together after the cameras have stopped rolling.

And while those rumours have repeatedly been denied, Angie Kent added some fuel to the fire when she dropped a hint about what sounded like a contractual arrangement while appearing on The Project on Friday night.

The 29-year-old appeared to hint that her contract suggests she stay away from runner-up Timm Hanly - and Angie insisted that she is paying it no mind.

Appearing on the show alongside her winner and new boyfriend Carlin Sterritt, Angie was asked by panelist Gorgi Coghlan if she had stayed in contact with Timm.

Angie revealed that she had, and said both she and Carlin, 30, are friends with him, with the trio talking regularly.

She added: 'I don't care about what you are not supposed to do.'

Sitting beside her, Carlin didn't even appear to flinch after Angie made her telling comments.

Angie said she wanted 'to be there' for the 27-year-old Timm, especially after their devastating break up during the show's finale.

Daily Mail Australia has reached out to Channel Ten for comment.

This is far from the first time that there has been talk that the winners are bound by a contract.

The 2017 Bachelorette, Sophie Monk, and her winner Stu Laundy, were also the subject of rumours that a contract was in place that saw them stay together a number of months before splitting in early 2018.

Almost immediately after the October 26th finale aired, rumours began swirling that Sophie and Stu had called it quits and were feigning their relationship until their contract ended.

Despite Sophie and Stu repeatedly denying the claims, many fans were not convinced, pointing out the couple's awkwardness around each other during TV appearances, particularly their post-finale interview on The Project.

Last year's Bachelor, Nick 'The Honey Badger' Cummins appeared to let slip that there may be a contract in place, when he referred to the 'three months' of media obligations he and his winner would have to attend, only to dump her afterwards.

Appearing on The Project, the former footballer said: 'It's not fair to her. Going down that path three months, only to break her heart.'

He added: 'She'd be sitting here now. People would be asking if you're in love. And it's like, I didn't want to lie'.

Rumours that a contract was enforced also arose when former Bachelorette Sam Frost and Sasha Mielczarek announced their separation in 2016.

Reports insinuated that the couple, who officially released a statement on their split in December 2016, had actually separated months prior, but were required to stick it out due to an 18-month contract.

Sam and Sasha's manager Georgina Harrop released a statement to Daily Mail Australia in December 2016, stating that the pair had 'just come to the realisation that the best way forward is to separate.'

So looks like Angie and Carlin have been hanging out with Yvie and others in Carlin’s latest Instagram story. Is this Kristen from Matt Agnew’s season? 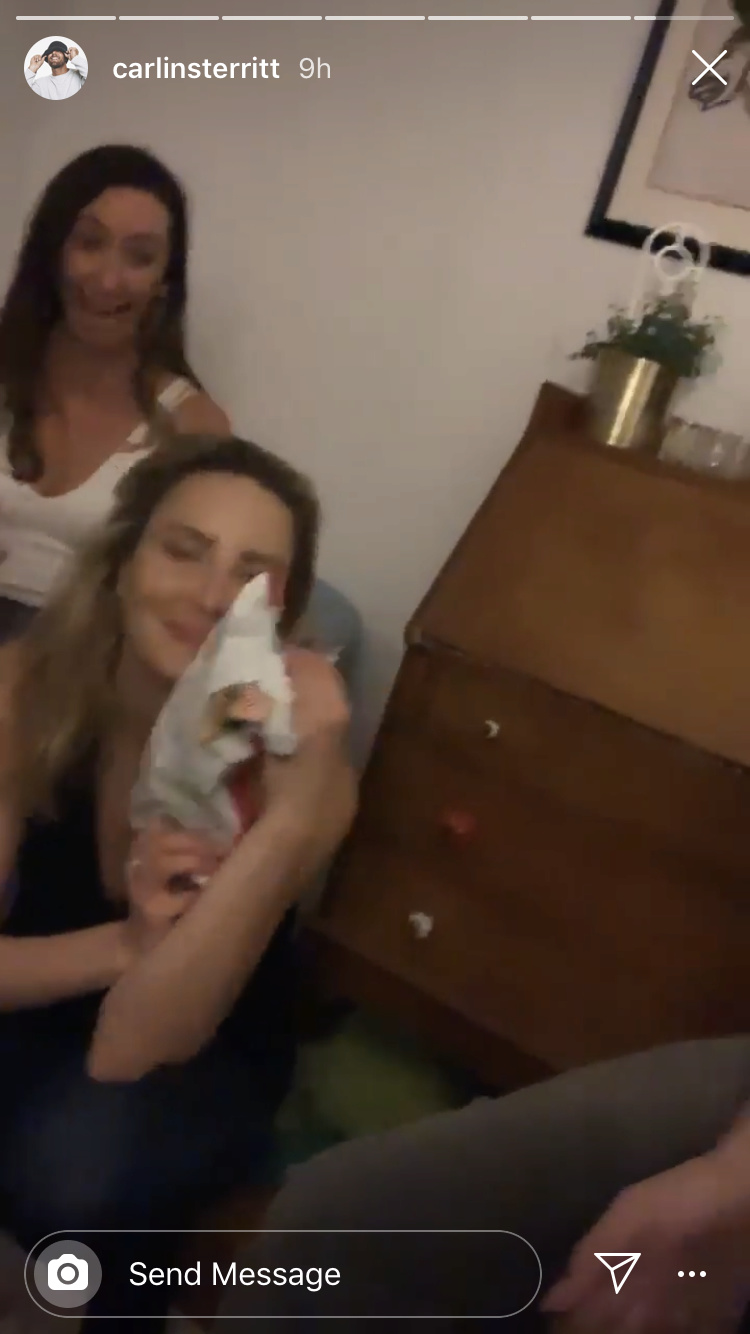 @sprout wrote:So looks like Angie and Carlin have been hanging out with Yvie and others in Carlin’s latest Instagram story. Is this Kristen from Matt Agnew’s season?

I've seen Kristen in Yvie's stories before. She must live in Melbourne now.

@sprout wrote:So looks like Angie and Carlin have been hanging out with Yvie and others in Carlin’s latest Instagram story. Is this Kristen from Matt Agnew’s season?

I've seen Kristen in Yvie's stories before.  She must live in Melbourne now.

Who would stay in a fake relationship for 2 years for 100k? For $1m maybe. Gross if that is true.

(( i seriously thought they would make it..

@Vjeff wrote:Who would stay in a fake relationship for 2 years for 100k? For $1m maybe. Gross if that is true.

In the context of these two, I could totally believe it TBH.

I don’t believe this ridiculous contract for a second.
JMO

@najpoziomka wrote:a little bit off topic but matt and chelsie confirmed they are no longer together

(( i seriously thought they would make it..

And that's a perfect illustration of why IMO Angie and Carlin won't last.  He's not her usual type, and nothing like what she said she wanted.  She is still getting her "funny fix" from Timm, but that's a bandaid measure IMO.

IMO Angie will quickly get bored/insecure and go back to someone more her usual type, who, in her own words, she can just chill on the couch and be "a bogan weirdo grub" with.  She's not going to get that from Carlin IMO.

@Bobette wrote:And that's a perfect illustration of why IMO Angie and Carlin won't last.  He's not her usual type, and nothing like what she said she wanted.  She is still getting her "funny fix" from Timm, but that's a bandaid measure IMO.

IMO Angie will quickly get bored/insecure and go back to someone more her usual type, who, in her own words, she can relax on the couch and be "a bogan weirdo grub" with.  She's not going to get that from Carlin IMO.

It’s funny, we as viewers think we know the lead and what they want but I don’t think this is necessarily true. We can only go on what is shown but in private, people can be very different. There are so many aspects to a person. Angie isn’t some naive girl. She wouldn’t have let TPTB or family/friends influence her in the final decision to pick Carlin imo.

@sprout wrote:She wouldn’t have let TPTB or family/friends influence her in the final decision to pick Carlin imo.

Uh, yes she would - she literally said on the show that family means everything to her and their opinion is paramount.  Personally I'd like to see Leads choose without pressure/influence from friends and family but that's another conversation.

When her parents met the guys earlier in the season they implied they'd seen Angie date many weirdo goofballs in the past, and wanted someone different for her.  And Angie said herself multiple times that Timm and Ciarran are her usual type.

Carlin is basically an experiment, and picking against type rarely works on this show, IMO.  Anyway, TWT and I don't think we'll have to wait long before this debate is settled.  Unless they've decided to go for that rumoured 2 year $100K payday....

Oh and IMO it's not just Angie who'll want out.  Carlin didn't want to win IMO, he wanted to be Bach 2020.  And IMO the thought of being associated with a "bogan weirdo grub" would be abhorrent to him.  He's all about "clean aesthetics", remember?