Is there any way Madi could be in LA? I’m not sure where that store is in her IG story but I feel like she hasn’t been as active on IG as she was when she first got back.

@sportsgirl94 wrote:Is there any way Madi could be in LA?  I’m not sure where that store is in her IG story but I feel like she hasn’t been as active on IG as she was when she first got back.

They aren't seen out and about usually on SHVs. She would come in get picked up at the airport by a handler and driven to the home where they are staying. They can't leave and handlers bring them food/games/etc. for their stay and they are then escorted back to the airport and fly home.

I've been wondering if they have changed the location of some SHV's this season because of Peter's job as a pilot.  I have no idea what his flying schedule is or what cities he flies into on a regular basis.

Hear me out and consider this...  if he flies into Atlanta (major Delta hub), with Madison (if she is F1) being close by in Alabama, could they be meeting somewhere in that area instead of LA.  After all, Hannah and Jed had a SHV in Nashville which is not a regular location.

Maybe it would be beneficial to try to track some of the producers/handlers and see if any of them are traveling at the same time as Peter.

Then again, he may not have chosen anyone and may not be having SHV's.  But, to me he just seems too happy to have gone through all that filming to end up single.

Just throwing out some thoughts I have had even though I'm not sleuthing.

Did Hannah actually meet up with Jed in Nashville?  I thought she was only in town for a day and he was out with friends that night.  IF they did meet up it was very brief.  From what I am remembering

@HavaDrPepper really good ideas. I remember in Peter's Instagram stories promoting the Seed to Mountain fundraiser thing this weekend, that he wants to go, just depends on his flight schedule. So it sounds like he might have to work this weekend. If he does end up going to Nashville for the event, he could easily go over to Knoxville from Nashville, or fly into Atlanta from Nashville. Got keep checking up on him this weekend.

As for producers, that's a good idea. A lot of them don't film when they're working on set and stuff so it's a little hard to track some. I remember thinking I had a lead a little while ago with one of the producers being in Arizona the same time Hannah Ann was in Arizona for Thanksgiving but it didn't end up being anything. He flew home the next day.

I don't know how up to date this list is but we have a thread for Producer's SM.

Hannah and Jed didn't have an shv in Nashville. What they had was an unsanctioned visit. If past leads are in the same town as their f1 they try to make time to visit them. Rachel and Bryan did one also at the mlb all star festivities in 2017 that where in Miami.  Hannah was just in Nashville for one night but they made time to see each other in between what she had to do at the CMA feast (I don't believe she stayed the whole concert).

A lot of people thought that shv would be on the east coast last year when both Hannah and her f2 lived on the east coast but they had Jed fly out to LA the two times they did have an shv and for the break up.

Peter hasn't worked that much yet from what I can tell. I know he flew to Georgia once from Cancun (fan airport pictures) but that was the day after Thanksgiving. Weren't both f2 seen that day. He showed us when he flew to Virigina (his first flight back) and somewhere in Texas (not remembering the town) on his Instagram. Both of those where before Thanksgiving.

@smg2587 thanks for the clarification: they saw each other’s but Hannah and Jed didn’t have a sanctioned SHV in Nashville.

It’s very rare that IMO the lead and F1 doesn’t have sanctioned SHV almost a month after FRC, which I think happened on Nov. 17?

The fact that even RS isn’t sure about the ending makes sleuthing more fun this year, and I am so grateful for those of you who keep close tabs on everyone’s whereabouts.

@sdmom wrote:@smg2587 thanks for the clarification: they saw each other’s but Hannah and Jed didn’t have a sanctioned SHV in Nashville.

It’s very rare that IMO the lead and F1 doesn’t have sanctioned SHV almost a month after FRC, which I think happened on Nov. 17?

The fact that even RS isn’t sure about the ending makes sleuthing more fun this year, and I am so grateful for those of you who keep close tabs on everyone’s whereabouts.

Its very unusual not to have a sanctioned visit by now.

And yes they have many unsanctioned ones but even those are usually much longer than the Nashville visit. Heck Andi and Josh pretty much lived together their whole time. We know Becca was at Aries before they broke up (pic of them out 4 wheeling with his friends). There are lots of unsanctioned visits.

I thought there was a producer with Hannah in Nashville since she was there on ABC's dime.  I know the visit wasn't long but I was under the impression that ABC set it up. Doesn't really matter but they did spend time together that weekend.

Let's not forget Becca's unsanctioned visit to Arizona the beginning of December when the photo of Arie and his friends that included Becca was posted then taken down.  If I remember right, they had not had a SHV before that and that the first SHV wasn't until mid December.  The main difference though is that they did spend more time together post FRC than Peter would have if he did choose someone.  After the mid-December SHV, their next one was between Christmas and New Year's in NYC.  Becca flew home on NYE and Arie stayed there to do season premiere press on January 1.  Their next visit was a couple weeks later which was the breakup.  So once they started it was about every 2 weeks.

JoJo has also admitted to sneaking away to see Jordan during their hidden time.  Jordan has talked about it as well.

I still think Peter will be hard to track if he is having SHV's because of his job.  An airport sighting for him doesn't mean anything!

@HavaDrPepper There was a producer with Hannah. Not only did she film the thing for CMA feast but that thing with Demi for bip where Demi admits to Hannah she was bisexual was filmed in Nashville the morning after cmafest. She wore the same dress in that scene as the one she had in appearances in Nashville.

With Peter since he been back on social media the only two days in a row that he hasn't been seen where last week Tuesday and Wednesday. So IF it already happen those are the days I would look at. I still find it a little weird he had the four following days free but who knows right now, jmo 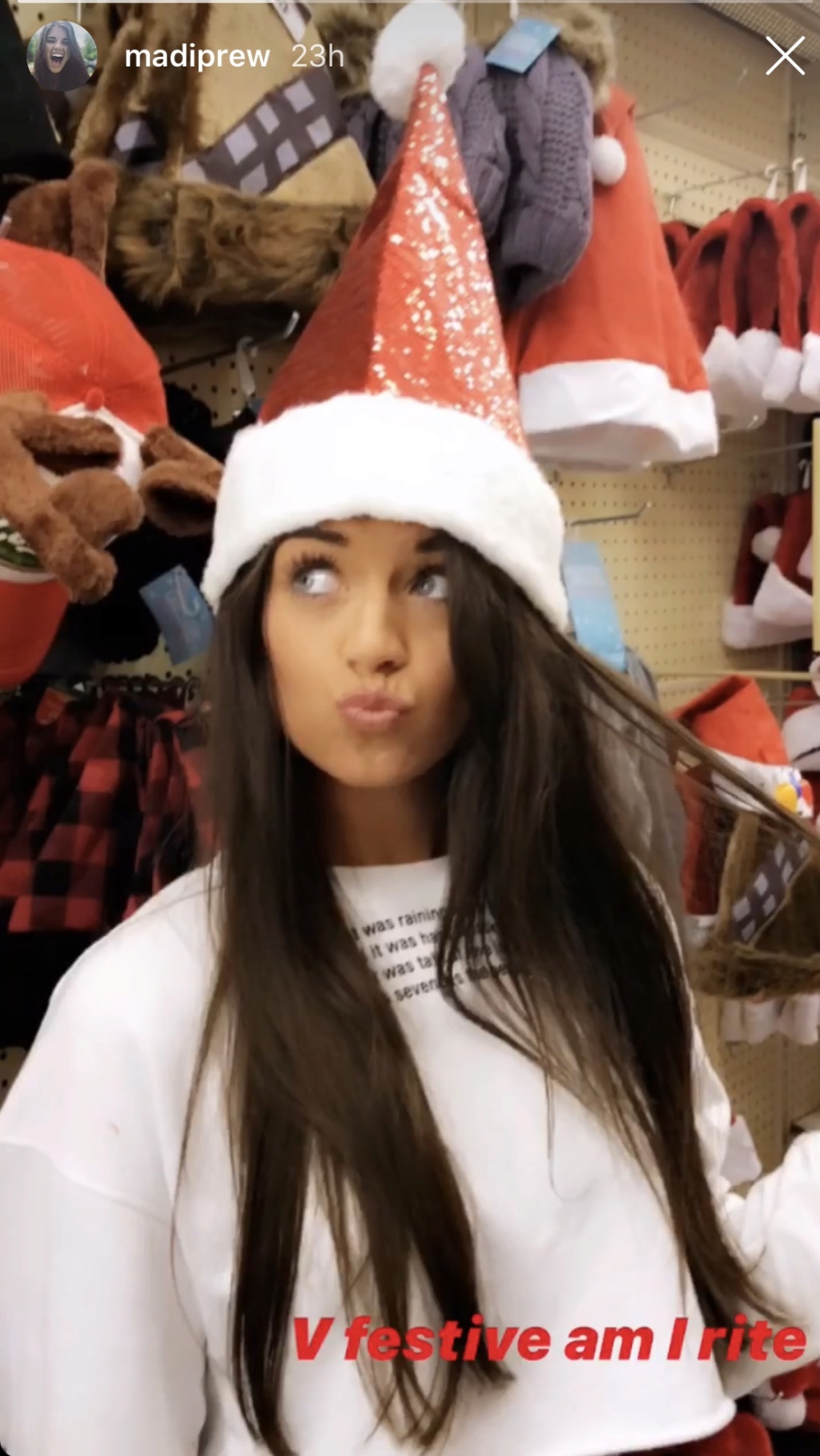 This picture that  Madison posted on her IG story yesterday was taken a few days ago when she was with her mom for her birthday. She’s wearing the same top. Madison’s whereabouts have been unknow since Sunday or Monday. Hannah has been posting on her IG story and she’s in Knoxville. I’m wondering if there could be an SHV these past few days even though peter has been out in LA a little bit the past few days.
Source (https://instagram.com/madiprew)