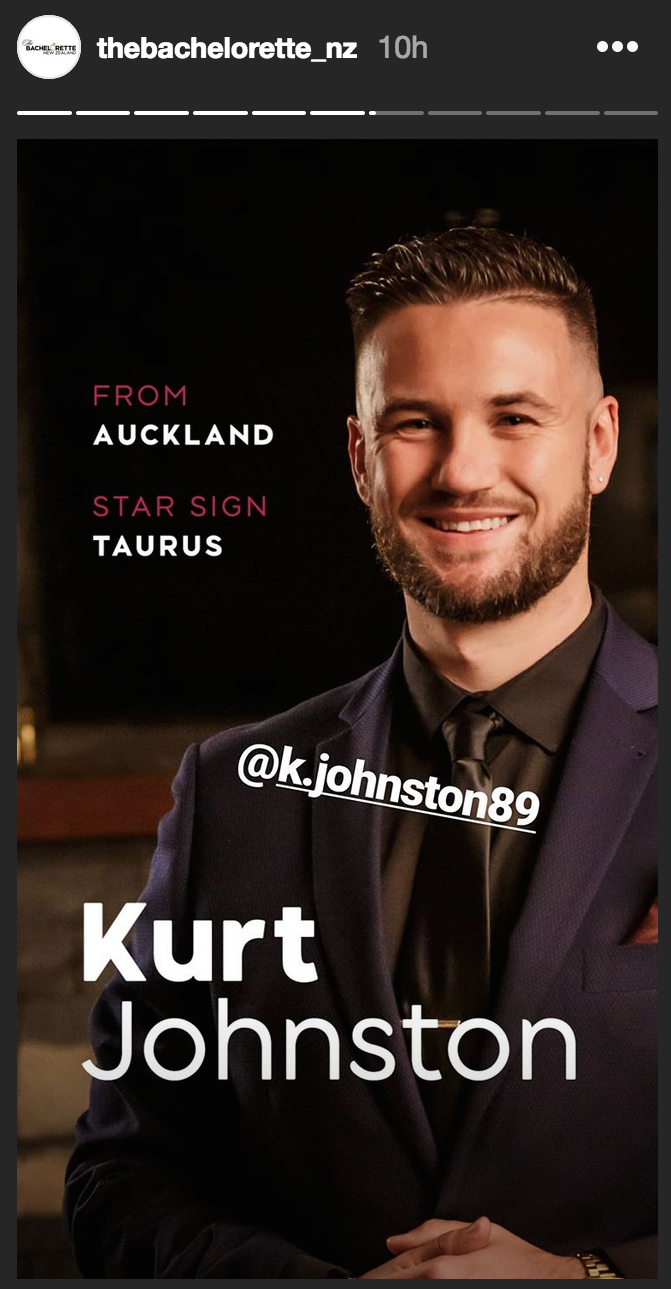 Kurt is looking for someone special he can take along to all the Warriors games this year! A huge fan of the Warriors (with impressive memorabilia collection), he’s hoping he can find someone that can share in his passion.

Having never watched The Bachelorette franchise series before, Kurt is going head first into the unknown – but he’s excited for the journey and hopes he’ll be able to find a connection at the end!

When he’s stressed or wants to relax, Kurt takes to the kitchen to do some baking – so let’s hope our Bachelorette has a sweet tooth!

Why did you apply for The Bachelorette New Zealand?

Someone submitted an application on my behalf initially, so it came as a bit of a shock when I got the phone call asking if I wanted to complete it!

In 2018, I stepped in the ring and had some boxing fights – and I wanted a challenge for 2019, and this was the perfect opportunity to get out of my comfort zone.

What will your friends and family say when they find out you are on the show?

My mum will probably be a bit excited and joyful, she’ll be like, ‘finally’! My father would have a typical dad response – he’ll probably just roll his eyes. My friends will be all for it, they want me to be happy and find someone to settle down with. They know I’m a hopeless romantic, so will look forward to seeing me on the show.

Tell us about your dating history:

My longest relationship was six or seven years long, that did not end on good terms. My most recent was about two months and I was left heartbroken, a little bit devastated. That finished about 18 months ago and I’ve been single since.

I probably haven’t thought too much about it!

What do you want to get out of this experience?

The ideal outcome would be to find someone to spend the rest of my life with and create memories with. If that’s not the case, to be out of my comfort zone.

Well now this is interesting.  What a tangled web the Bach world weaves.  A spot of mutual attention seeking here IMO. 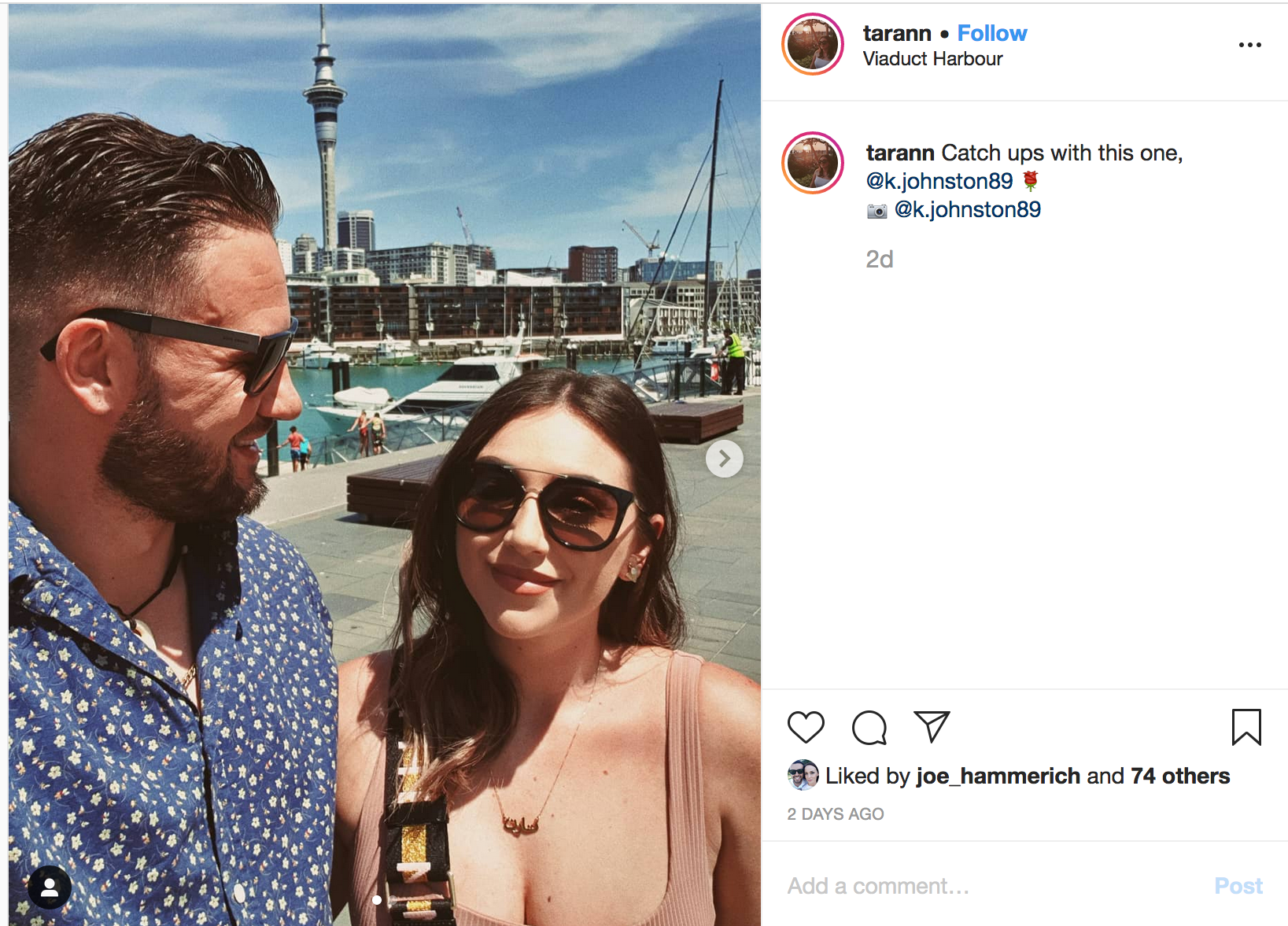 Context for anyone who didn't watch the last Bette AU: one of the contestants was married to this woman during filming.

Also just noting that Kurt is one of only three contestants following the show sponsor, and is tagging them on his IG pics.  That may indicate he goes far (or maybe he's just focussed on the promotional/marketing opportunities).

His placement in the cast photo is interesting because he's right around where I would expect an F1 to be hidden, but is association with Tarann and recent following of various busty girls would make me skeptical of his motives.

Kurt has posted his NZ WD spread on IG if anyone wants to read it. 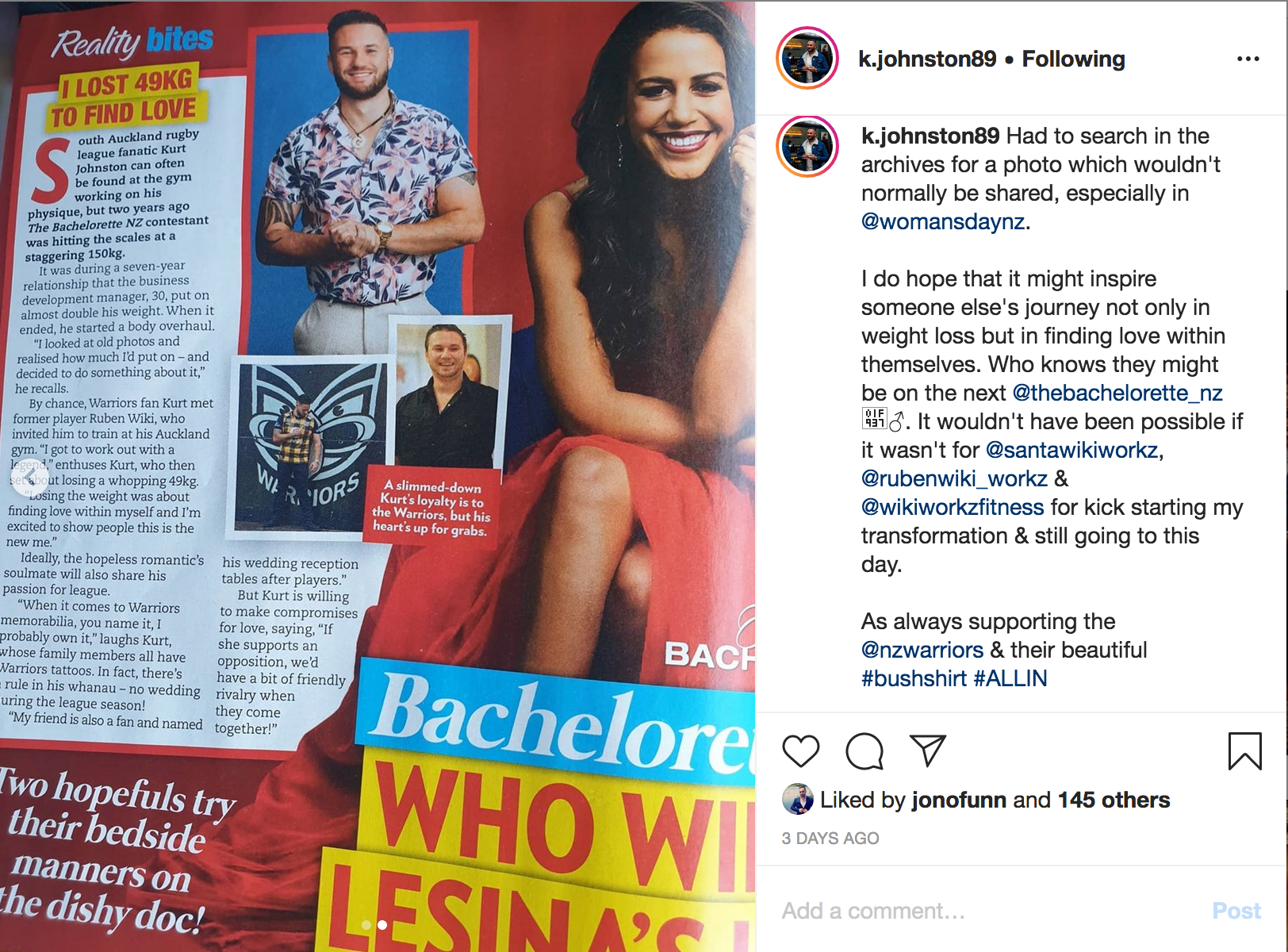 He's clearly no stranger to the @tag game and enjoying the publicity IMO.

@Bobette wrote:Who do we think this is in the thumbnail below?  Is it Kurt?  And is she gagging, or impressed?  I can't tell.

ETA:  Yeah I think it's Kurt - blue jacket black shirt like he's wearing in the group shot.  That's probably a Warriors t-shirt in his hand. 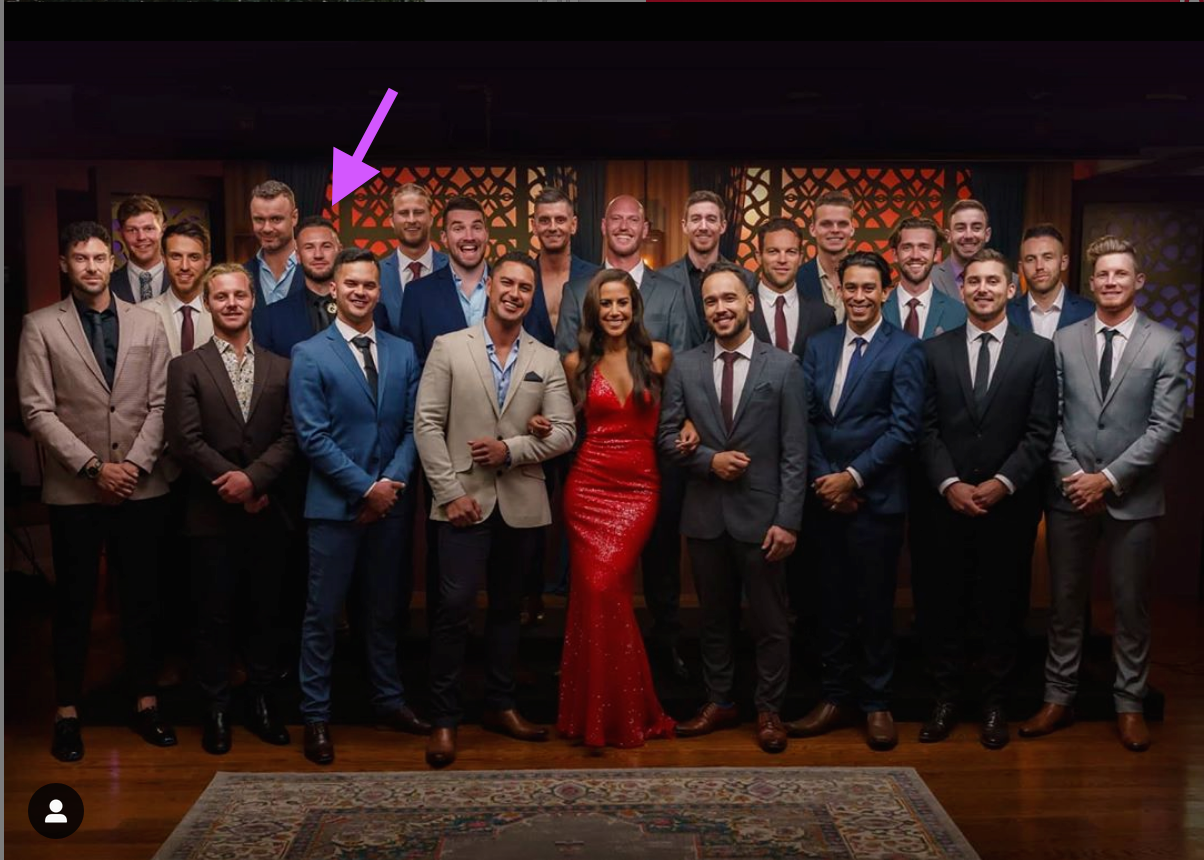 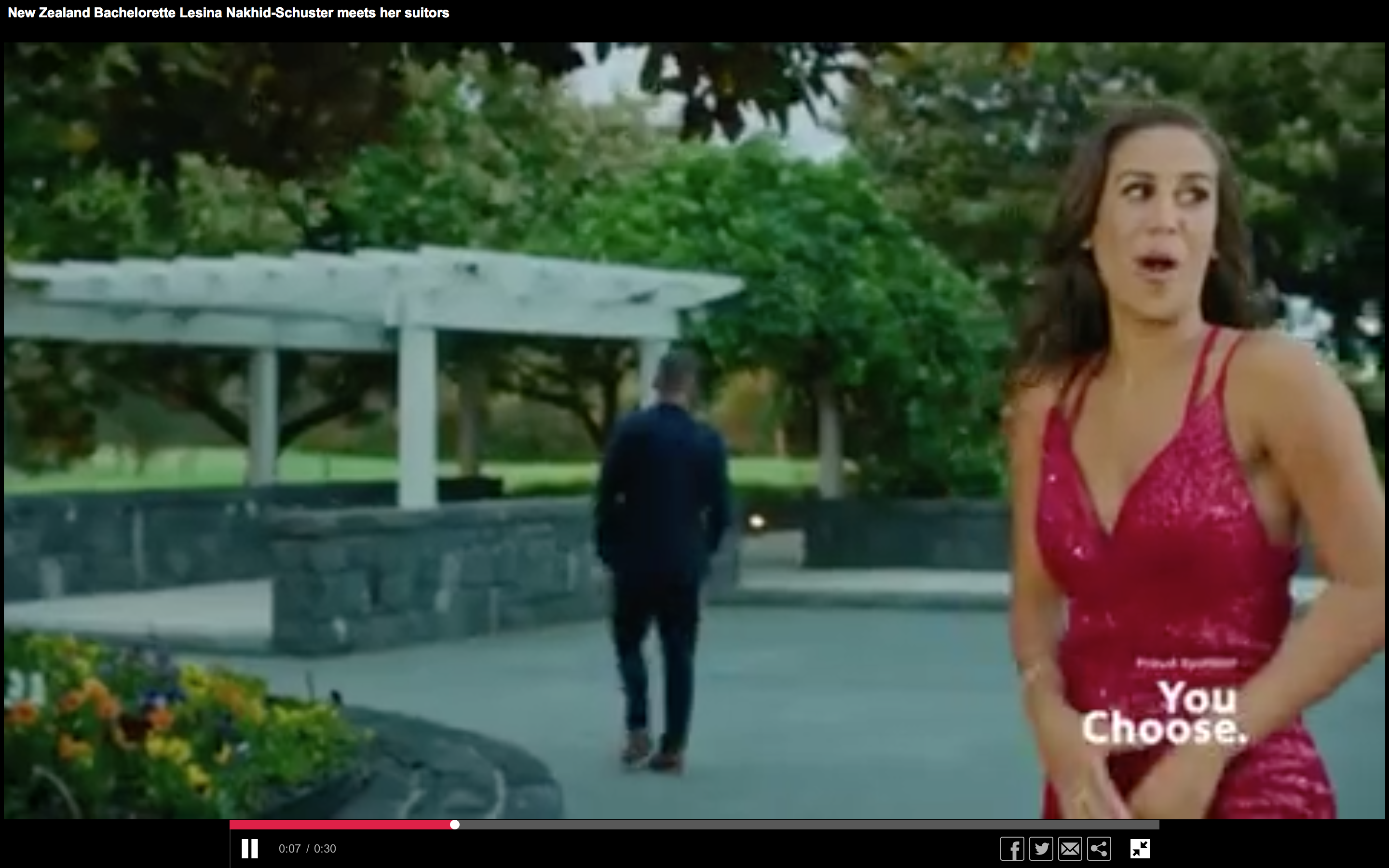 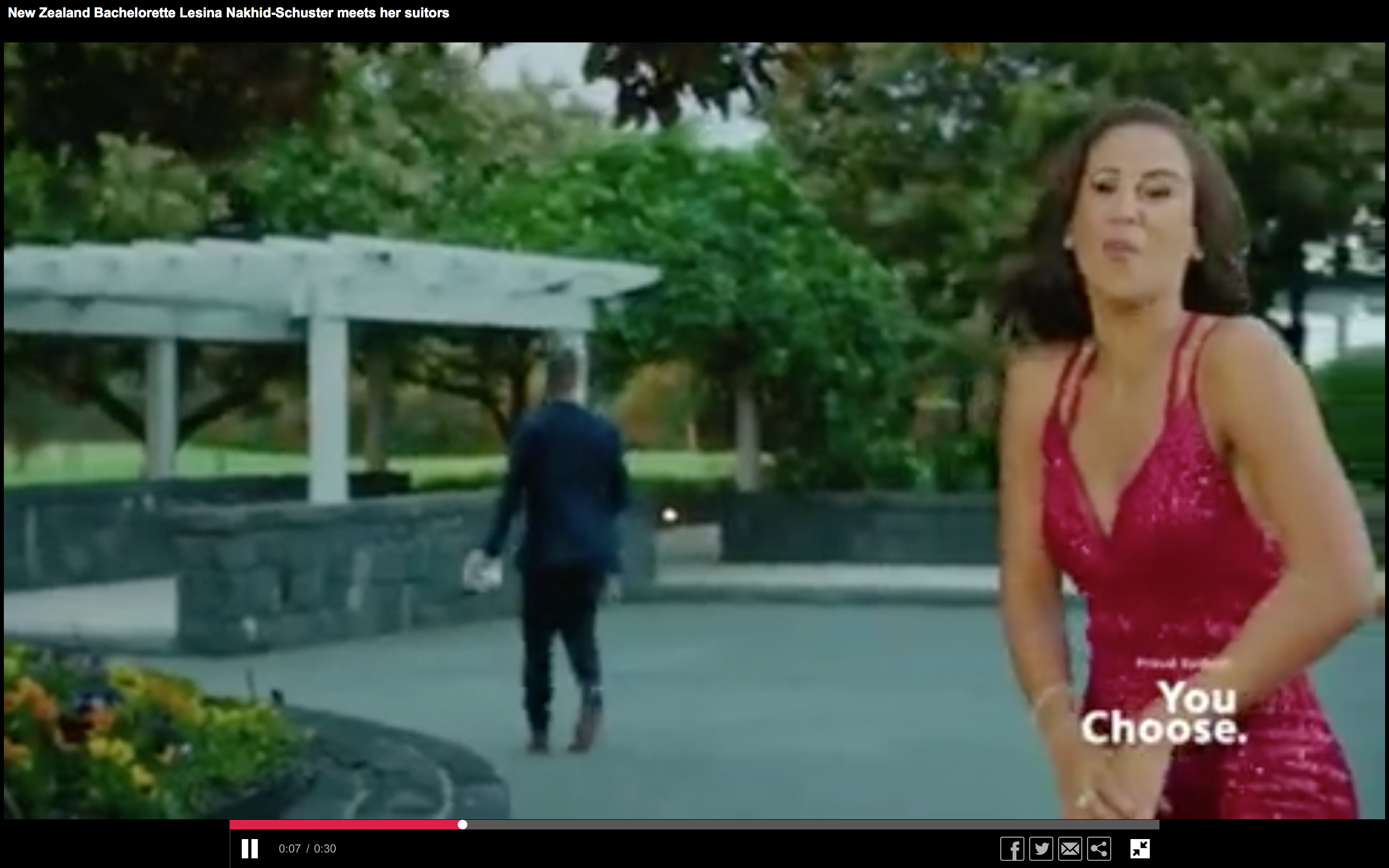 So is she gagging, or does she think he's hot?  Phwoar or Urrggh?

Showing someone only from the back is very F1-ish.

All I can say is that I made 3 different charts with his possible birth info and there is undeniable strong polarity and attraction there. Sun and Venus - Mercury Moon and Mars Etc. One to watch as I predicted.
I can’t wait to find out more when they meet live. I wonder how all these guys will differentiate each other and appeal to her.
JMO
ETA just went through his IG and found his birthday! Will make adjustments to the chart.

He seems to have cleaned up his IG follows since I last looked.  He had followed 5-6 busty chicks in a row just prior to being announced.  Wish I'd screenshotted it but I figured that ruled him out as a contender.  I'd be seriously side eyeing this guy if he's F1.

@Bobette
Yes, he may,  but frankly, he seems like the regular ‘ Bro’ sport crazy guy who ‘ plays hard’  and he doesn’t post much about him or his life apart from 2 things that I’ve noticed.
1.. He loves taking pics with random ‘ celebrities’ he seems to meet through his work; from Post Malone, to Pauly from Jersey Shore fame, to a bunch of sports athlete of all kinds.
2 . He developed a new interest for baking DESSERTS, and they look yummy and decadent! That’s a plus for me

As I mentioned earlier, they share several great aspects of compatibility and polarity. Great communication with their Mercury conjunct, a super hot sexy vibe with Venus opposite Pluto, paired with a romantic combination of Venus Trine Neptune.
Just to be clear, I don’t ‘ like ‘ him more than others, but I interpret what I SEE and report what are elements that constitute a foundation for a relationship. I also look at the clues we have on hand through media and since he’s hidden quite a bit, it fits a certain narrative IMO.
There are 4 other Taurus, but their age differs and I don’t have their info yet. So to be followed...
This is the first time I openly discuss these Astro elements  before épisodes are actually shown, so there a lot that can happen. Don’t kill the messenger!

@Astrobach Yeah the celebrity photos, plus the abundant tagging on his pics, plus the association with Taran; it all makes me think this guy is seeking fame.  He's also following a bunch of MAFS NZ people so IMO he wants to be part of the "in crowd".

I hope the reaction we're seeing in the video isn't Lesina going "oh wow he's so hot" and falling under the spell of a pretty face/hot bod (not at all my type but YKWIM).  I've seen enough Leads do that

I was hoping she'd be smarter about her choice.

@Bobette yeah, can’t agree more, not MY type either, BUT it’s her choice and I’m seeing that she may have an attraction to him and he to her, albeit a different woman than his usual type. Lifestyle wise, not sure it’s a match but again...we’ll see!

@Astrobach I thought it could be a case of she's only ever been around nerds at med school so hasn't had the opportunity to try out more of a Jock/Gym junkie type but looking at her IG she has no shortage of male admirers from all walks of life so IDK. Really interested to see her full reaction when they meet - that will tell the story IMO.

@Bobette
Well, watch out for a ‘baking date ‘ala Matt and Chelsie’

that would make things interesting!