jueliakinney I am so dumb I could barely post this picture on Instagram. #joebailey I could have used your help! #bachelorinparadise Make sure you tune in tonight to watch me cry 2d

Did she actually get with Mickey at the end after all the drama ?

The only thing Carly’s ever said that I didn’t agree with: “She’s a single mom. I don’t know when she’s going to get another opportunity like this.” I’m a little over the emphasis that because Juelia has a child at home, she is therefore more entitled to “finding love” in Paradise than the next person. Yes, objectively I understand the sacrifice; she does seem to miss her daughter very dearly. But the way I see it she is an adult just like everybody else and she signed herself up for this, knowing what she was getting into. This is as much of an “opportunity”—where for three weeks everyone is filmed dating each other for a national television show—for anyone else as it is for Juelia. Back home, does she have a harder time being able to go out on a last-minute Tinder date, what with needing a sitter and all that? Probably, yes. But here, in Paradise, she’s voluntarily left her daughter at home, and her time should not be treated as any more valuable than anyone else’s. Why? Because she can leave at any time. No one is forcing her to stay.

On the Bachelor/ette, if the lead doesn’t feel it with the single parents, they are often sent home sooner than later to spare them the unnecessary time away from their kids. Their decisions are often made for them. In Paradise, it’s truly incomparable how much more time they have with the opposite sex versus with the lead on The Bachelor/ette, so that’s information with which to use their own judgment and make choices.

Okay, so it was fun watching Joe squirm at Mikey’s return. However, Juelia’s request was a wrench I did not appreciate. She wasn’t into him the first time around—anyone remember his attempt to kiss her?

Why force something? If some magical connection between Mikey and Juelia really were there in the first place, Joe never would have had the power to change Juelia’s mind. Yes, what Joe did to her was unbelievably censored-ish, there’s no doubt about that. But Juelia was ripe for the picking when Joe came around; it’s not like Joe wrenched her from Mikey’s gargantuan arms. (Let’s not forget, when Joe had his horseback riding date card, he said to a group, “So, does anybody wanna go horseback riding?”, to which Juelia raised her hand and said, “I do.”) I’m not a believer in this “leave no stone unturned” bull crap. Mikey is not a stone left unturned, and even if he were, they hardly saw each other as more than a ticket to sticking around longer. They lived in the same space for several days, where Mikey was linked to Clare and Juelia was linked to Jonathan. If they had something worth exploring, it would have happened then. I’m not defending Joe in any way, but for all his villainy, he was actually not the one to “rob” Juelia of the chance to “find love.” Maybe—just maybe!—Juelia’s perfect match isn’t one of the two or so unattached men to sporadically rotate through the Paradise roster.

I genuinely like Juelia. I really do. And more importantly, just about everybody on Paradise seems to adore her, so that speaks volumes. (It really does.) But what perturbs me is how much the attention she receives has a tone of sympathy and pity to it. This is by no means her fault. We know by now how much this show loves a tragic backstory. Thus, we haven’t gotten much insight into her charisma, intelligence, or appeal as a romantic interest, but rather have only seen her painted a hapless sad sack who deserves love for being a hapless sad sack. To her credit, she did refuse JJ’s “pity” rose, but how was the show allowing Mikey’s return—as per her own request and after she herself sent him home—not also an act of pity? 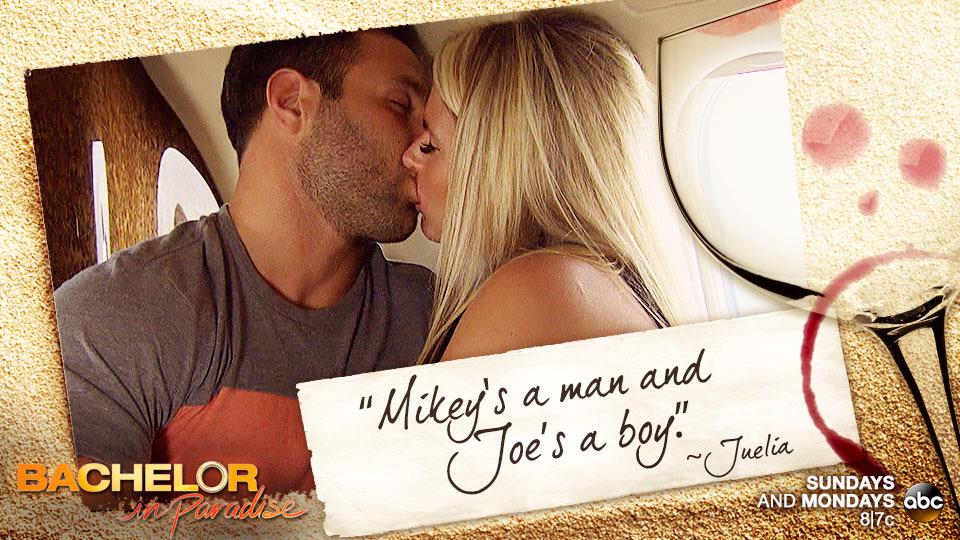 jueliakinney Feeling the love!!! So lucky to be surrounded by such incredible people that care so much!! Thank you for your love and support ️I've never felt so special in my life!! #bachelorinparadise #abc #paradisemiracle #mikeyisback #secondchances #bachelorfamily