They had a nice tribute to Gordie Howe at the finals tonight.

Congrats to the Penguins for winning the Stanley Cup!

Congrats Pens. They earned it. I missed the game tonight, but based on the other games this series, Sharks seemed to run out of gas, or the Pens just wanted it more, or both.

Missed the game tonight because my son is eloping next week and we had a reception dinner for them. Fun night even with the Sharks loss. Now the long summer with no hockey begins.

Congrats Pens!!! Good run for the Sharks as well!

I'm having bitter sweet memories since 11th & 13th are Kings STC days so seeing the Pens raise the cup made me tear up a little. *sigh* At least with the Blackhawks it was days later and not right in between the 2 days!

Congrats to your son Mustang!

I had no idea there was a game 6 and was pleasantly surprised.

What a great season for the Sharks, tough loss but they have so much to be proud of. I have to say, love the SJS fans, they are awesome.

I'm happy for one of my all time favourite Mario Lemieux, for all he has done for the game of hockey, for Pittsburgh and for Canada. I'm also happy for Phil Kessel who I felt so bad for during his disastrous time with the Leafs. They shipped him off to Pittsburgh and he wins the cup.

We are lucky hockey is a long season, but it's long in between seasons too!

All these changes were made by greedy owners, which they felt was best for the viewers, and I'm sure expecting their pockets to blow up with more money, only to have it all backfire and result in a disaster. Who gets paid millions of dollars to make bad decisions? My hockey season and many others, was ruined by the changes. Now they are reverting back. What a bunch of goons.

I'm glad Strombo is gone and Ron MacLean who they should never have gotten rid of, is back, on his terms and Elliotte Freeman's butt has been saved.

Rogers Media cut a wide swath through its hockey broadcast personnel on Monday, dismissing at least six on-air personalities including Glenn Healy, who was the between-the-benches analyst on Hockey Night in Canada’s No. 1 crew.

P.J. Stock, Billy Jaffe, Chantal Desjardins, Corey Hirsch and Leah Hextall are also gone in a housecleaning prompted by a disastrous miscue by Rogers’s upper management regarding Canadians’ appetite for hockey, a mistake compounded by mediocre play from Canada’s NHL teams. And the 5 p.m. NHL pregame show on Saturdays on Sportsnet 360 was cancelled.

There was no immediate word on further job losses, although company insiders were expecting a larger number of behind-the-scenes people to be dropped as well. The bad news came just a few days after word leaked that George Stroumboulopoulos was fired as the main host on Hockey Night in Canada and would be replaced by his predecessor, Ron MacLean.


Also gone from Hockey Night in Canada is Damien Cox, who appeared in the second-intermission news and discussion segment with Elliotte Friedman. He moves to Toronto radio as Bob McCown’s permanent co-host on Sportsnet 590 The Fan’s Prime Time Sports. Surviving the Hockey Night purge are Friedman, Kelly Hrudey and Nick Kypreos.

Rogers made the switch back to MacLean official on Monday, when the company announced that he will return to the job he held from 1986 to 2014 when Hockey Night was under the control of the CBC. But MacLean will only host the early Saturday night game, as he insisted he wanted to keep his job as host of Sunday’s Hometown Hockey, which sees him broadcast live from different communities across Canada. MacLean will also continue as Don Cherry’s sidekick on Coach’s Corner. 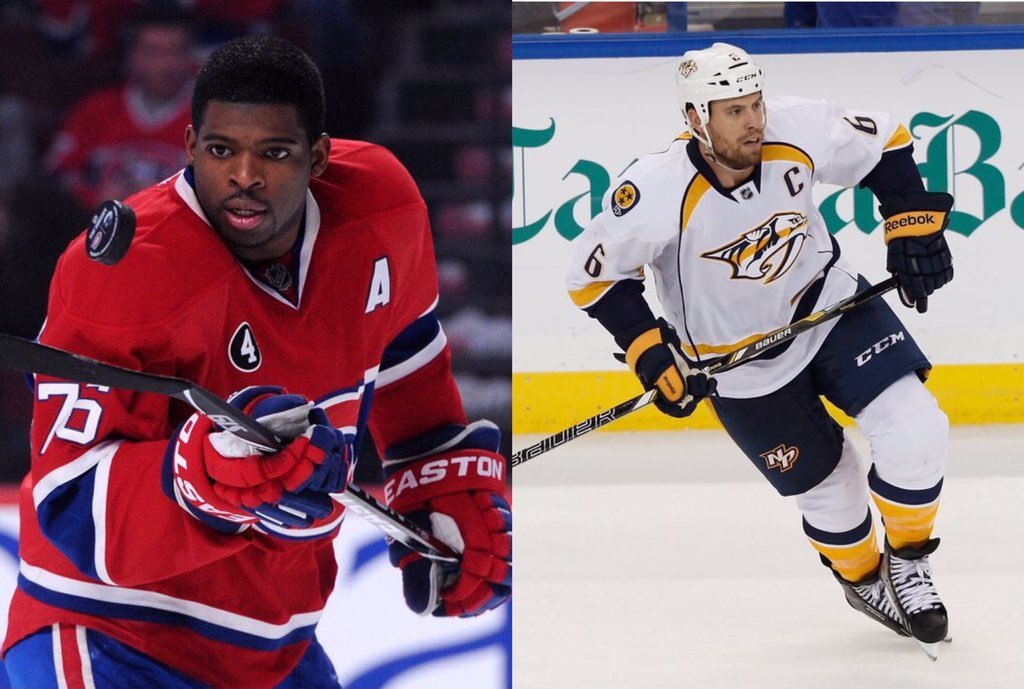 I am now a Preds fan. Amazing trade for the Habs. I can't believe this! Shae is an outstanding player, won some Olympic gold for Canada, glad he's with this franchise, but PK,

my favourite player! Such a good guy.

I need to find out the money situation! Both of these guys had huge huge contracts. PK I don't think is even in his second year of his 7 yr or whatever it was he signed. $13 mill or something like that.

Wow, I can't believe they traded him.

ETA: I didn't even read the link yet. Ok I was off by a few millions.

Subban is heading into the third season of his eight-year, $72-million contract.
The 27-year-old Subban wrapped up the 2015-16 season posting six goals and 45 assists in 68 games. In seven seasons with the Canadiens, the Toronto native has put up 63 goals and 215 assists with 532 penalty minutes.

CRAZY! Right before that Oilers/Devils made a trade and then shortly after Stamos re-signed with Tampa for 8 years 8.5 mil. Friday will have so much more going down when everyone signs with new teams!

I know I'm really late but, you guys, the disappointment of having your two teams in their respective finals and then having them both lose, it's not fun

. Can't wait til next season!

I'm not used to all this sports stress, I'm from Chico, CA, where the closest pro team is the Sacramento Kings (blah imo). I moved to the Bay area 4 years ago where there's like 6 pro teams and I've never been the same

I'm glad for the Preds. Too bad you lost your player, GA.

It's okay @albean99 I hope the Preds win the cup next season and I'll be rooting for them all the way.

PK is such a nice guy. He has donated thousands to that city, always positive, always motivating regardless of any negativity he got, and he got a lot. Montreal is a tough city to be in. After settling myself down, I'm glad he's out of there.

SM is going bannana's. Many giving up their support for the team.

Vid in the link. Classy all the way.

BREAKING NEWS: @PKSubban1 responds after being traded from the Canadiens to the Predators.https://t.co/nQjW6gnpiO

I'm getting sicker by the minute. This article explains why I'm so crazy upset about this. I'm not too happy with the Canadiens organization right now!

http://www.sportsnet.ca/hockey/nhl/p-k-subban-trade-may-worst-canadiens-history/
Why the P.K. Subban trade may be the worst in Canadiens history

There is a tendency in the era of social media to overreact to big trades, pronouncing an instant winner and loser without all the details. Sometimes the “wait and see” approach is wiser and shows maturity.

This is not one of those times.

The Montreal Canadiens have made possibly the worst trade in the history of their franchise, for no reason at all. P.K. Subban is no longer a Canadien and will instead suit up for the Nashville Predators, with Shea Weber taking his place in Montreal. A one-for-one deal of two right-handed defencemen with enormous contracts, but only one of them is worth it.

Subban, 27, is four years younger than Weber, who turns 31 in August and is signed for six more seasons to Weber’s 10. Even if the two were equivalent talents, taking the older defenceman who is signed longer is a bad deal, but unfortunately for the Canadiens, Weber has been in sharp decline for a number of years.

No player in the NHL made more plays with the puck per minute played than Subban, while Weber ranked a lowly 216th of 256 in terms of involvement in the play, and it gets worse when you compare the two directly.

Not everything a player does is accounted for here, but this is a strong cross section of the responsibilities of an elite defenceman – and it’s not close to compare the two. Only Erik Karlsson compares favourably to Subban’s contribution in generating scoring chances, and Weber isn’t even among the top 30.

Subban is an elite transition player who moves the puck up ice with control better than almost anyone in the NHL, and again, Weber is nothing special there, as he relied on Roman Josi.
Weber is close to Subban when it comes to passing the puck out of the defensive zone, but this past season was the worst of Subban’s career in that regard, as Michel Therrien constantly harped on him to dump the puck out, which he did.

Carrying the puck out is the mark of an elite puck-moving defenceman, and Subban does that at more than three times the rate of Weber.

A similar story applies to loose puck recoveries, where Subban is the envy of the league for winning puck battles in the defensive zone and Weber ranks 202nd, between Braydon Coburn and Jack Johnson.

Even in something as simple as completed passes, Subban’s numbers blow Weber’s out of the water, and this is without even getting into each player’s impact on shot attempt differentials, where Subban is perhaps the best possession defenceman in the NHL the past four years — easily in the top five — and Weber is a consistent negative, despite playing with Josi.

Now Weber will move from playing with Josi to the 38-year-old Andrei Markov who, while supremely talented, is certainly not fleet of foot. Neither of these two defenders move particularly well, making this look like a recipe for disaster.

This trade is so lopsided that it’s hard to believe it happened at all. The Canadiens have saved all of $1.14 million in cap space, but committed to an older player for four extra years. They’re on the hook for Weber’s July 1 signing bonus of $8 million and will pay him a total of $54 million until he’s 41 years old. Subban is owed just $58 million until age 33.

Subban established the biggest charitable donation in North American sports history to directly help sick children and their parents in Montreal. He won a Norris Trophy and was nominated for another. He signed his bridge contract despite having every reason not to. He was the Canadiens’ best skater for the past five years straight. He was the their most valuable player last season while most others were faltering, he bought into poor coaching instruction despite the fact it hurt his game — and he still elevated. He was beloved by Elise Beliveau, and captured the heart of a city.

So what did he do wrong?