This is pure real

Jo looks so adorable and happy with her bad boy. 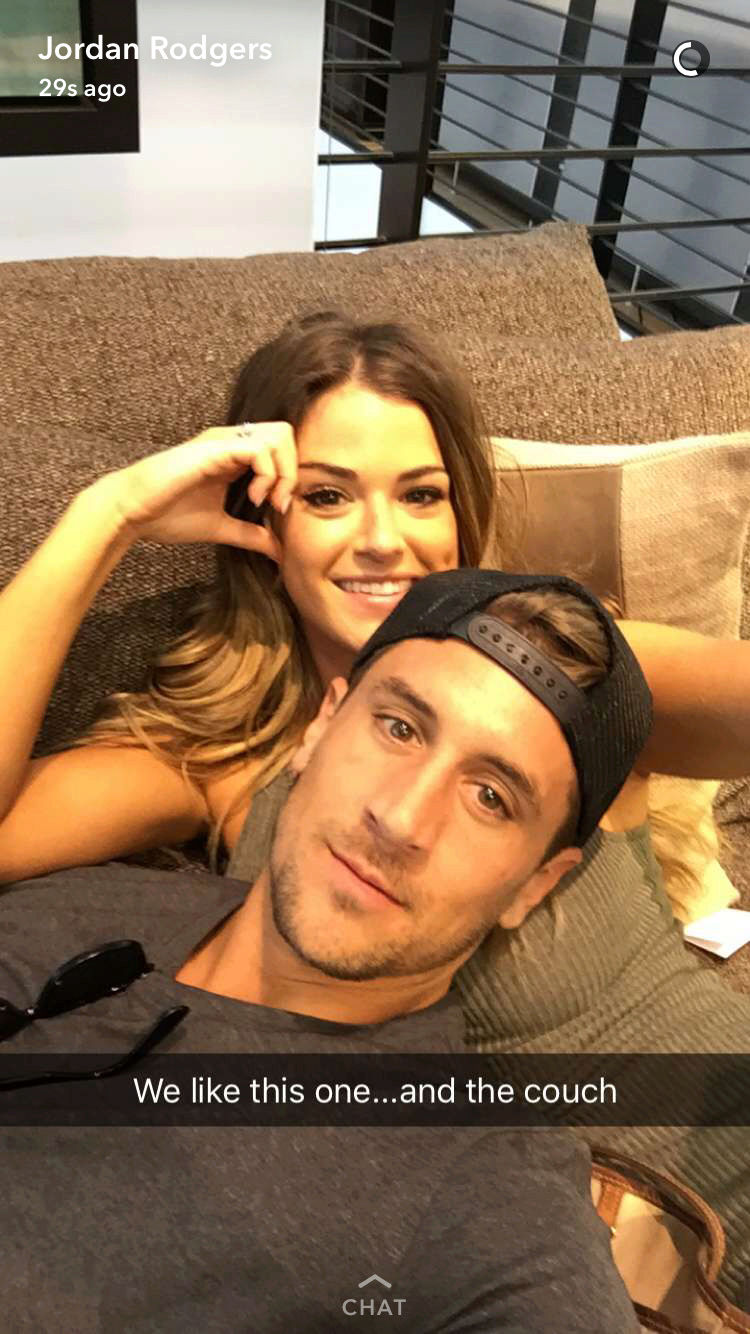 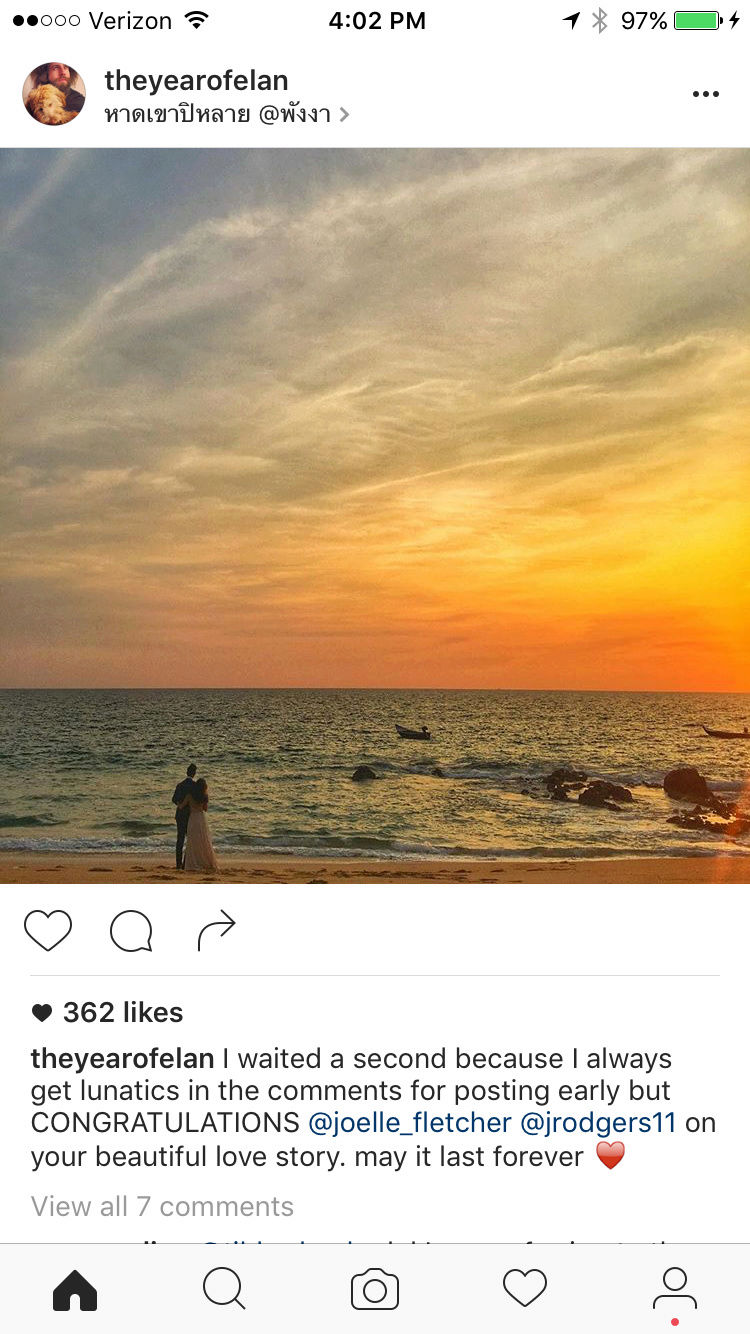 Emila23_12 wrote:
Just hanging out on the couch they like
IG joelleandjordanrodgers

Her ring is gorgeous and stunning. Fits well with Jojo's dainty fingers.

Look at that stunner!


"Love this one." - Jordan | JoJo singing and dancing in the car

Isabel123 wrote:I loved this interview, they know each other well in such a short span of time and appreciates and love each other eccentricities. And today they were couch shopping

Jordan and JoJo are couch shopping for their new house!

Isabel123 wrote:It's so rare to see the tender side of Jordan and Jojo is very affectionate.


I think Jordan's a little tired from couch shopping 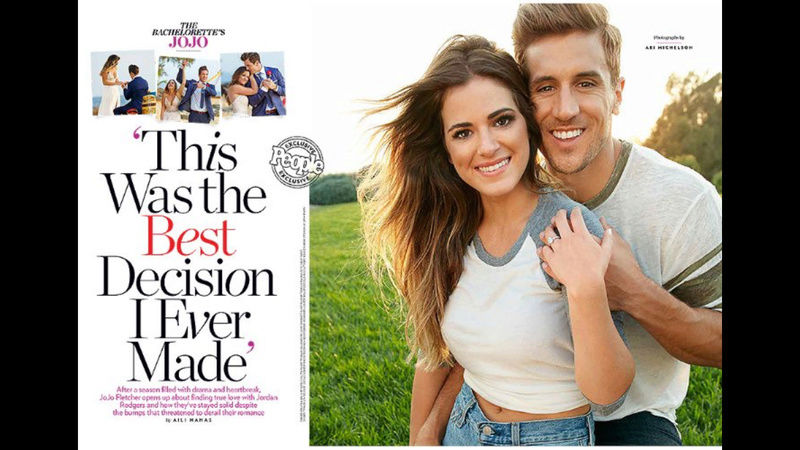 
A match made in heaven! Following 10 long weeks of anticipation, JoJo Fletcher chose Jordan Rodgers over heartbroken runner-up Robby Hayes as the winner of The Bachelorette on Monday, August 1.

Below (and in the video above!), Us Weekly rounds up the couple’s six cutest moments from season 12 of the hit ABC reality dating show.

1. Jordan Gets the First Impression Rose

From the moment the brunette beauty, 25, laid eyes on the former NFL quarterback, 28, she seemed to know he was the one. Surrounded by a group of more than two dozen drunk suitors — including a Santa Claus and a man in a kilt — Fletcher pulled Rodgers aside and presented him with the First Impression rose and the first kiss of the season.

“I’m really excited about you, and I feel very comfortable with you,” she told him on the May 23 episode after gushing about his butt.

2. Jordan Sweeps JoJo Off Her Feet

The 6-foot-1 hunk showed off his athletic — and romantic — side during a memorable football group date on the June 7 episode. After weeks of being the front-runner, Rodgers finally expressed his feelings for Fletcher.

“I feel like I’m falling for you. I can see somebody that I can fall in love with,” he explained as the Bachelorette stared adoringly at him before giving him multiple kisses and a rose.


Things started to get hot and heavy once Fletcher and her remaining admirers passed the halfway point of the season. On the June 20 episode, Rodgers pulled the Texas native away for some alone time during a cocktail party. With the rest of the group just feet away, the athlete passionately pushed Fletcher against a wall and started making out with her in one of the most-talked about moments of season 12.

4. A Romantic Glass of Foot Wine

In the July 11 episode, Bachelor franchise host Chris Harrison arranged for Fletcher and Rodgers to go on a one-on-one date at a winery, where they put their shoes to the side and stomped barefoot in barrels filled with grapes. After pouring some of their freshly made wine into glasses, the real estate agent quipped, “I tasted your feet today.”

The couple spent their first full night together when Fletcher took Rodgers to the intimate Fantasy Suite on the July 25 episode. Inside the lush hotel room, the pair discussed their future and “took a big step … in a really exciting direction,” NFL star Aaron Rodgers’ brother said. Fletcher later told the cameras, “We have fun together, but we also have that passion and that chemistry. And I feel so happy.”

After a heartbreaking goodbye to Hayes, Fletcher chose Rodgers as the man she wants to spend the rest of her life with on the August 1 season finale. Before getting down on one knee, the aspiring sports broadcaster gushed to his future bride: “It’s moments like this, where I’m holding your hand, I’m looking in your eyes, and I know I’m so unbelievably in love with you. You’re my best friend, you’re my soul mate. I’m going to keep you safe, I’m going to protect you. I’m going to wake up every morning and choose you over and over and over again until you tell me I can’t.”

Page 5 of 10
+7
Alanna
Linds911
OccasionalRach
IrelandRose
Judiful
Dessler
nd4reality
11 posters
Permissions in this forum:
You cannot reply to topics in this forum