Isabel123 wrote:This is a great read with funny tweets.....

For a season that might have had its lulls, this was certainly a finale to remember. I found myself very emotionally invested by the time the episode came to a close and was almost embarrassingly moved by that proposal. Then I found myself hyper-analyzing JoJo and Jordan’s After The Final Rose happiness levels and body language to decipher if they are indeed all good because I, too, saw all those gossip mags on my frequent jaunts to Duane Reade [America’s Shoppers Drug Mart equivalent]. But I’m getting ahead of myself.

First, the highlight of the actual finale episode was without a doubt JoJo’s family. I loved her mother’s real deal, uncensored take on things and how the whole family being there brought out a side of JoJo we hadn’t seen all season. She was raw and not necessarily on her best behaviour; there was a moment where she sort of snapped at her mom, and it was so daughter-like, real, and and relatable. Her descriptions of her fears with each path seemed better articulated and thus more understandable when she was laying it out for her family. Even her infamous brothers seemed to have been able to fend off any producer nudging to act up as they were completely drama free. They were also quite perceptive, like when her brother Ben pointed out how, when the whole family seemed to be #TeamRobby, JoJo jumped to Jordan’s defense. Yup, I loved JoJo’s family.

I think this was the first episode where JoJo expressed what seemed to be the most powerful factor in her relationship with Robby: how adored she felt. Her words: “I don’t know if I’ve ever felt so cherished by somebody.” It’s easy to criticize that as simple frivolity, but as a woman I could appreciate that statement deeply. How many of us have stayed in relationships far longer than we should have (with no filming deadlines, of course) because we were afraid of never finding the same level of love and adoration elsewhere? Being cherished on its own isn’t enough for a healthy relationship, of course, but it is a very difficult thing to shun. Watching that factor alone—JoJo recognizing that adoration, appreciating, reciprocating, and ultimately rejecting it—was fascinating. Television sped the process up and forced an outcome sooner than later, so it was like a fast-forwarded social experiment. Yay, reality TV!


As for the happy couple, honestly I really love them together. A lot. During the episode, I appreciated Jordan’s off-the-beaten path hesitation leading up to the final day and how, in his overcoming that and taking that “leap of faith,” he had his own mini story arc. His proposal speech was loaded with that specificity I’m always harping about, and I think anyone who doubted him or them together had their foots in their mouths watching that tearjerker of a proposal. On After The Final Rose, I couldn’t help but notice JoJo seemed a tinge somber, but then again, Chris Harrison was insistent on grilling them almost exclusively about negative topics. She had a visible repulsion to discussing Aaron Rodgers and the “family feud” (which is more than understandable) but lit up when discussing the future. That inability to slap on a smile regardless was one of the many reasons I loved JoJo at the helm. As Bachelorette, she was reasonable and thus relatable, unpredictable (I think she sent home more guys on dates than anyone ever?) and emotional and thus entertaining, and above all, almost painfully transparent and thus very real. I applaud her and know I’m not alone in wishing the happy couple heartfelt congratulations!


"Get those refried beans babe." - JoJo

They both look hot though!

Is Jo not a dead ringer for those little monkeys in Thailand grabbing on to people?? They're her celebrity doppelgängers

And these aren't new but I just liked them this morning when searching for new pics.

I forgot this one had happened and I'm simultaneously super happy for her and still somewhat shocked she got to keep this BBJ. I was thinking it's like a one day guest appearance maybe

I'm sure he's more shocked than me that she got to keep him this way.

And then this one I didn't notice on the show. She scratched out "unicorn" before remembering the handsome asparagus. Who thinks like this? I love her!

Looking forward to more of their adorable real life together

Ash2214 wrote:New People magazine article. There's another new picture as well. They both look so good! Also, it's pretty crazy to read that he great up in 13 different houses as a kid because his family didn't have money. I'm looking forward to the magazine coming out tomorrow so we can read the whole thing:

jjdavid wrote:I don't know if this has been posted but we have a new article & video!

Apparently, this is their new home? If so, it's cute! I would be ripping that wallpaper down though and making some updates for sure!

thanks for sharing M2

I also can't wait to follow their life on sm, they are getting lots of positive feedback on twitter about snapchat
This is one of favorite pictures of them from yesterday: https://www.instagram.com/p/BIrQNOnjdCC/?taken-by=joelle_jordan_rodgers
Jordan looks so good 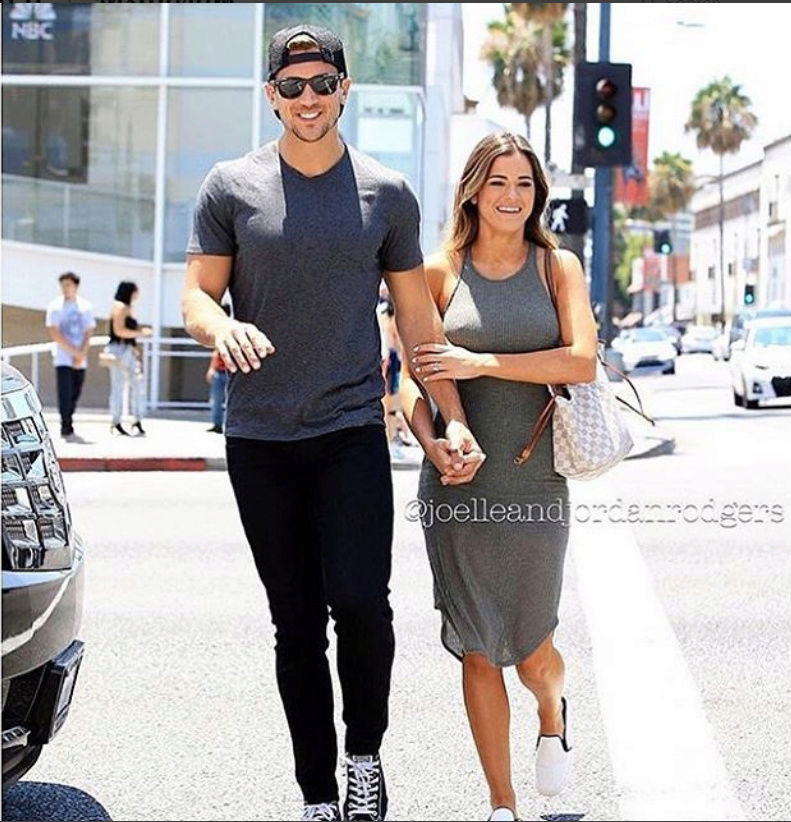 Page 6 of 10
+7
Alanna
Linds911
OccasionalRach
IrelandRose
Judiful
Dessler
nd4reality
11 posters
Permissions in this forum:
You cannot reply to topics in this forum