Going back to work and having a more normal schedule has got to help any couple achieve some stability in their new and under-the-microscope relationship. Especially if their goal is eventually to marry and have a family. They are doing and saying all the right things but time will tell if they can make it work. Hope so - just as I do for any couple that goes through this experience.

I do hope Elise now being in Sydney and running in some of the same circles as matty does not create any additional strain. Not that I think she would do anything to sabotage in any way - she has shown herself to be quite respectful of their relationship. But hopefully matty will do everything in his power to build a firm foundation of trust and soon the Bach mansion will become a distant memory....

Good for you @Billysmom emailing Alisha, how nice to hear back from her.  She seems equally lovely.  I only just discovered Alisha's Instagram personal page (@lelubee) and she said some very sweet things about Laura and Matty.  Under her post with the official couple pic she replied to someone saying:  "It's been such a wonderful experience to be part of and to see them both finally together."  Also Laura and Alisa's mum (@kimvec) saying:  "Cried with her so proud."  (I would bring a screenshot over but I'm a bit hopeless

I wondered about Elise being close by as well but I would think they have the ability to be mature about it if they do cross paths, and it might go some way to clearing the air.  I do wonder whether he was ever super into Elise to start with, although I guess we'll never know.  I think it was in that Who interview where he says something like:  'It was like what I said to Cobie, you can have all the right ingredients but it just doesn't happen'. (Not verbatim.)

Yes @Norcalgal , they do seem to be saying and doing the right things at this stage but no doubt it's a difficult adjustment to come out of the bubble back into the real world.  I hope it works out for them. 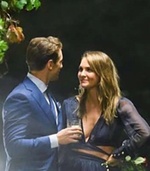 @Billysmom oh IA with everything you have said! my heart really is excited for these two! My fingers are crossed that Mattaura will last a lifetime or at least as long as their star!  BTW how awesome about alisha sending you a personal email! that is fantastic are you aloud to share a little of it?  I would so love to know that they are doing well.

@solaroo tell me where i can find the post and i will try to bring it over if you like? 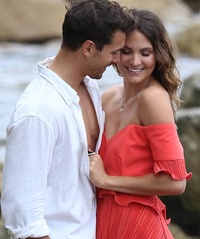 I thought this was a great interview with Laura. It is very long i only pasted some bits and pieces below

So there it is! After months of spoilers, speculation and secret meet-ups, Laura Byrne and Matty J can finally share their sweet, sweet love with the nation.

In this exclusive winner's chat, a giddy Laura, 30, talks to Now To Love about falling head over heels in love on reality TV, why she has nothing but respect for runner-up Elise Stacy, and why she can't wait to make some beautiful Bachie babies...

How does it feel now your love is finally out in the open?
I’m excited, I’m nervous and I feel a little bit relieved it's finally all over!

How nerve wracking was that final rose ceremony? How did you feel leading up to it?
It’s actually pretty petrifying! That whole time in Thailand I genuinely had no idea what the outcome was going to be. Walking up there, you don’t know if you’re going to get a bullet or a blank. You prepare yourself for the worst, but you hope for the best which is a bittersweet thing to do.


What did you do mentally prepare yourself for the final rose ceremony, did you guys have anyone to speak to?
I talked a lot to my minder, the person who is with me in the hotel to make sure I don’t run away. So I had her to speak to a lot which was great but I kind of resigned to the fact that there was a very big possibility that it wasn’t going to be me, and I had to be OK with that.

A big part about caring about someone is that you want the best for them so I genuinely wanted him to be happy and I think that was the most prominent thing I had to keep reminding myself.

Even if it was me who was sad, I’d made that choice so it was a possibility.

As much as I knew she was there, we didn’t speak. It was more difficult when I was doing my interviews and she was on a date. That’s when it hit home that I’m sitting there saying all these really nice things about this person that I want to be with and knowing full well that he’s still exploring his feelings with someone else, which is really quite difficult.

What’s your relationship with Elise like now?
It’s actually really, really good. Elise and I were always friends in the house. We slept in the same room the whole time, so we were roommates. Of course towards the end it became not strange, it just became more difficult to support each other.

We’ve had time now to move past it. We saw each other today and it was really good.

How hard has it been watching Matty’s dates with his other girlfriends, especially Tara and Elise?
To be perfectly honest, during the whole process I was really aware Matty did have strong feelings for the other girls as well. That was never hidden from me. It’s not surprising but it is uncomfortably to watch.

Do you watch those scenes or do you have to leave the room?
[I watch] bits and pieces of it but I don’t torture myself over it.

At the same time I watch enough to not be ignorant to the fact he has connections with other people.

There’s been a lot of comparisons between you and George Love, is that a bit awkward?
Look, I’ve never met Georgia but I’m sure she’s an absolute legend. If that is what they’re going to say about me that’s negative, it’s not even negative!

I know that I’m not like Georgia and it doesn’t really phase me.

What do you imagine your future with Matty to be like?
Just being together and dating! Seeing how life pans out.

As far as those things are concerned, we’re both very much on the same page with what we want in our lives.

With past Bachelor couples like Richie and Alex struggling to make it – how much pressure do you feel to go the distance with Matty?
Matty seems like he’s a pretty level-headed guy… it’s the start of a relationship and some of them work out and some of them don’t. I think the added pressure for it to work out is unnecessary because at the end of the day, you just have to be happy.

One thing that will last forever is your star! How’s Mattura going?
I don’t know! I haven’t checked in on it for a while but I’m pretty sure he’s still ticking over considering he’ll be alive for the next 10 million years. I don’t think he’s going anywhere too soon!

Can you believe that you’ve fallen in love on a TV show, does that just blow your mind?
Yeah, totally! As much as I wanted to do it, I was a little bit skeptical that I would have the capacity to have those feelings for someone in that environment, because I did feel at the start like it was really manufactured.

But when you click with someone and you do meet someone that you just mesh with, those feelings are real and they’re not just the bi-product of being on a reality TV show. They’re very genuine!

Which girls will you be keeping in touch with and which contestants will you be bolting from if you bump into them at an event?
I’m really good friends with Flo, I absolutely adore Tara and Cobie… Those girls are people I’ll keep in my life for many years to come.

I guess the girls I don’t want to associate myself with are the girls that are filled with drama and who are really doing the social media traps at the moment. I’m not interested in that!

so not sure either how to post from Insta ! I embed but it didn't show? Weird anyway best I could do is below 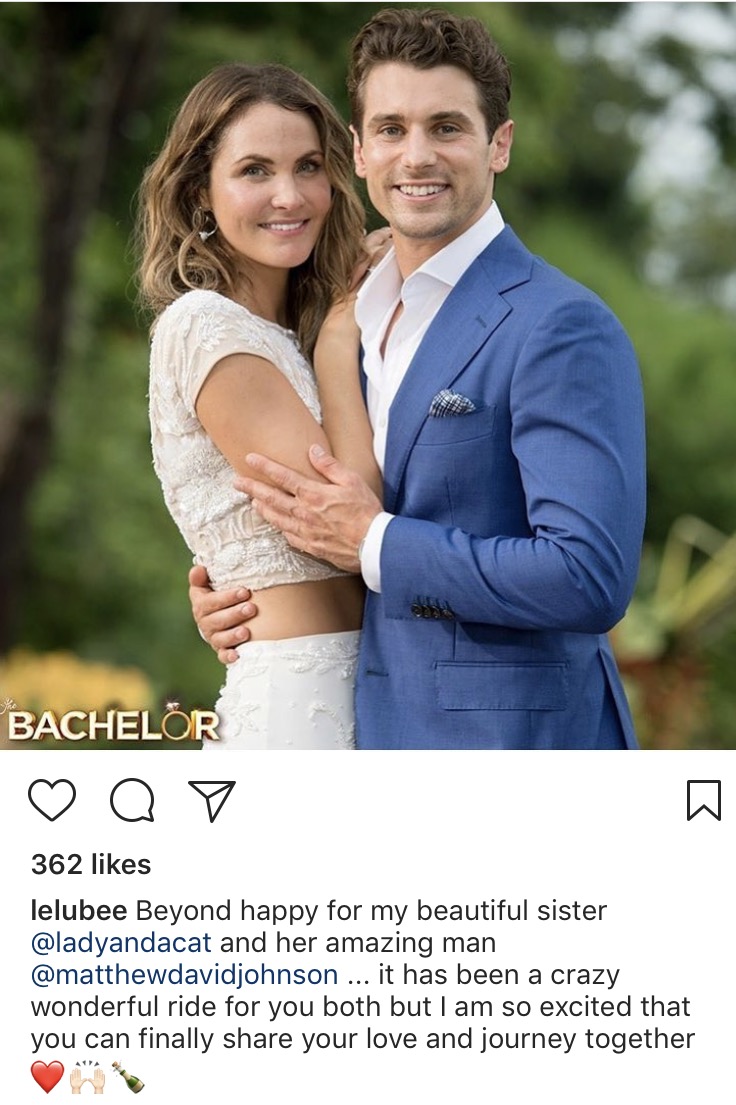 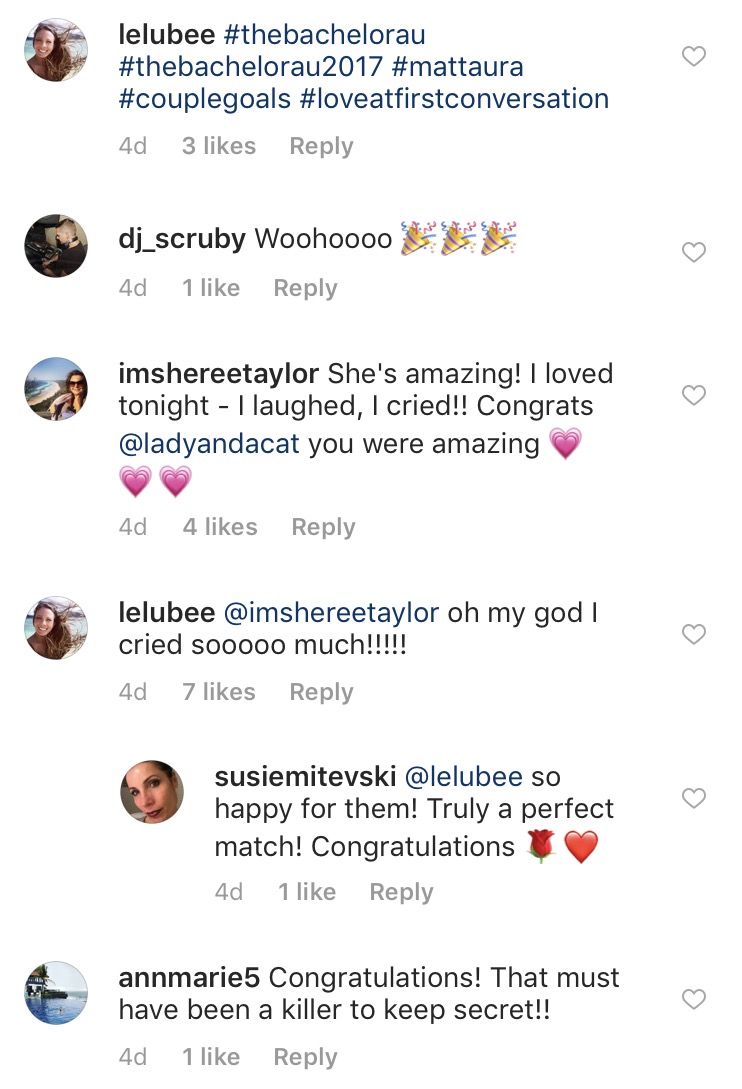 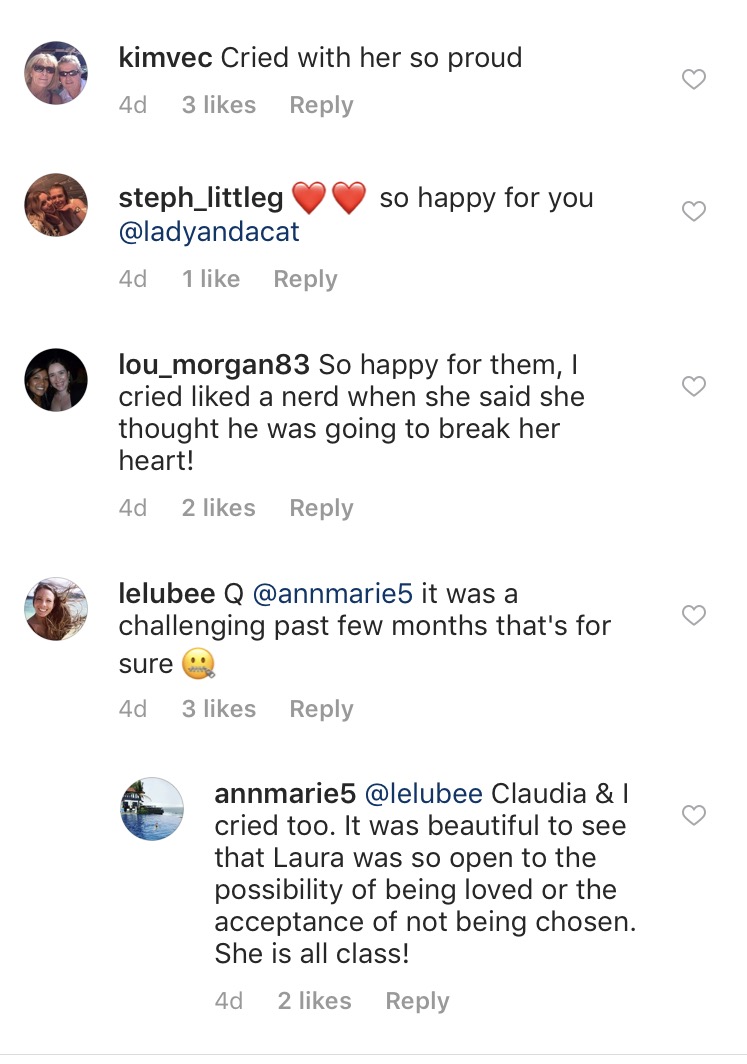 Thanks again @BabyGotBach I really need to get more savvy with that stuff.

Yay, so in love with this couple! Probably one of my all time favourite Bach couples!
I think the vulnerability that Laura showed in the finale proved to me that she is genuinely invested, and it's been written all over Matty's face from their first date imo. I honestly can't understand why so many on SM are calling them/her fake when in my eyes they are so, so real!

From all the interviews/pics post show, they seem to be really happy and affectionate and loving, so I really hope that they stay together!

Now if only they would release the footage of what went down in the secret garden... hahaha!

@Schnitty4lyf wrote:Yay, so in love with this couple! Probably one of my all time favourite Bach couples!
I think the vulnerability that Laura showed in the finale proved to me that she is genuinely invested, and it's been written all over Matty's face from their first date imo. I honestly can't understand why so many on SM are calling them/her fake when in my eyes they are so, so real!

From all the interviews/pics post show, they seem to be really happy and affectionate and loving, so I really hope that they stay together!

Now if only they would release the footage of what went down in the secret garden... hahaha!

Love them as well and I couldn't agree more! IMO Laura was beautiful and so vulnerable it gave me all the feels Matty is one lucky dude

I would love for the bachelor people to do a blooper reel ! And yes I also wonder what went down in the secret garden !

they would have gorgeous

They kiss beautifully.   That to me is a great giveaway