She really rocked that blond wig

. Every time I see the Nanny, i think of Ben Affleck. Sorry Beks.

Video in the link

Lucille Lynch, an 87-year-old Fresno woman, left her meatloaf in the oven Thursday evening to visit a downtown shop where her favorite contestant from “The Bachelor” met and visited with fans.

“She’s an absolute doll,” Lynch said about 22-year-old Bekah Martinez, a Fresno woman who is a contestant on this season of “The Bachelor.”

Lynch has watched the show for years and didn’t miss Monday night’s episode. She hopes Martinez will be chosen by former Indianapolis 500 racer Arie Luyendyk Jr, who is 36.

“I think it’s OK, the age difference,” Lynch said. “It looks like they had the most chemistry together.”

Martinez met with dozens of fans Thursday night at Scraps, a novelty shop that sold “missing” posters with her mug that were created by the Laguna Collective. The posters were an idea of Scraps owner Tony Stamolis after Martinez was reported missing in November. (Her mother reported her missing after not hearing from her daughter for six days.) Bekah even sported a Scraps T-shirt.

After being dumped from a relationship in early 2017, Martinez answered an open casting call for the show. At the time she was working as a nanny in Los Angeles. She hoped The Bachelor would be Peter and didn’t know who Arie was.

“But after it was announced, I thought, ‘You know what? This is kind of cool because it will be like meeting a stranger,’” she said.

Martinez said the relationship viewers see between her and Arie on air is authentic. “Everyone says ‘You guys only make out all the time.’ I’m like, no, there’s a lot of conversations you also don’t see that are off camera and aren’t aired,” she said. “I think we had and have a real genuine connection with each other.”

When asked about Krystal, a contestant many fans consider fake and competitive, Martinez said none of the drama on the show is manufactured. “What you’re seeing is what you’re getting,” she said. “And you’ll see the rest of it play out in the weeks to come.”

Martinez grew up in the Fresno and Clovis area, attending Fresno Christian and then being home schooled. She graduated from Clovis High. It was exciting to meet other people from her hometown, she said.

One of those people was Karley Kemble, a 24-year-old Fresno woman. This is the first season of the show Kemble has watched, and she said it’s been cool to see someone from Fresno.

“I’m surprised she’s made it this far,” Kemble said. “Some people say she’s young (compared to Arie), but age is just a number.”

Not everyone at Scraps was from Fresno.

Ashley Pool, a 19-year-old from Michigan, drove all the way from her Malibu vacation to meet Martinez. “A lot of the girls (on the show) are fake and calculated,” Pool said. “I love Bekah’s free spirit. And, who looks that good with short hair?”

Martinez told fans that every contestant goes back to their normal life after the show. The contestants keep in touch in a group chat – except for Krystal. After traveling with them for weeks, they’ve formed an “unbreakable bond.”

“I think it’s really neat to have a network of people now who support each other regardless of whether whoever stayed longer and even though we were all dating the same guy,” she said. “I think it’s still a really cool connection we have with each other.”

So, what’s her overall takeaway from her experience on the show?

“Love can exist on a TV show, in a number of different ways – platonic and romantic.” 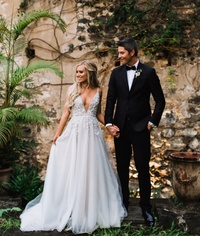 I saw on Instagram that it is her birthday today, so Happy Birthday Bekah!

23, Happy B! ... she definitely made this season enjoyable, so no doubt she's enjoying it to the fullest

She really could have a career in television. Very outgoing, bubbly and personable.

whats_ur_sign happy valentine’s day from me— a strong independent woman who don’t need no man.
who sometimes has crazy hair.

She's starting to annoy me.

I got my haircut because of you Bekah!

Stop being a baby.