@mysthelma wrote:The headline is for click bait. She did not throw Mike under the bus. She just said she asked why he was not chosen and was told there was a reason. IMO the reason is they wanted Peter period.

I disagree. Yes, I am sure they wanted pilot Pete and his 4x in the windmill crap. Much more salacious. Rachel could have said just that...that there was a reason...and leave it at that. She didn't do that. Here is her quote:

But Lindsay says she does not believe that the reason Johnson wasn't chosen is because he is black. She says she was told there was something else behind the scenes. "I was told there was a reason. What that reason may be, I don't know," she reveals. "I wasn't given a specific answer."

"Maybe they can't specifically tell me why they didn't choose him. And I think if they could tell us, they would, because it just looks so bad that they didn't pick him," Lindsay says. "I mean, Michael Johnson was a gift. To me, it was an easy decision, but I'm not in the decision room."

"They do all kinds of background checks and vet things out. I have no idea what the reason was, but they have it. I'm told they have a reason," Lindsay repeats, "because I was definitely up in arms when I found out it wasn't going to be him."

IMO There was no need to bring up background checks. She implied that there was something unsavory in that background check and that excluded him. It was subtle, but it is there and it was unnecessary.

I mentioned on IG in a comment that although Mike was probably a nice guy there must be a reason they didn't choose him and I continued to rally around Matt James being a great candidate for next MOC lead. Someone replied ."The reason Mike wasen't picked is because he can't keep his big mouth shut" I have no idea what that means , but I do remember something like that being said after he went on that date with Demi Lovato , supposedly he was mentioning something in an interview that was either personal or just something he shouldn't have said. IDK. But maybe TPTB thought he might not be the right person who they could trust wouldn't slip with the confidentiality that the leads have to protect while making the media rounds , before , during and after the show. IDK.

I don’t give them an out for not picking Mike. It made me mad that they were insinuating things about him when I feel the reason was that they thought Peter was going to be another Ben Higgins. Well, that was an epic fail.  Unfortunately, Rachel believed what they told her (or didn’t tell her) and repeated it.

They'll look even worse if they don’t choose a black male lead next season, imo. I think Matt James would be a great choice.

Did anyone watch Rachel's interview with Lauren Zima? Rachel said how disappointed she was that they haven't had a black Bachelor yet or a Bachelor of Color. Lauren replied back that they have had 2 Latino Bachelors with Juan Pablo and Peter. Rachel responded that they are White Latino men not Black. Lauren did not have a comeback to that. I love Rachel and her honesty with everyone -- even Chris Harrison's girlfriend. I think Lauren needs to step away from reporting on the Bachelor Franchise -- it has taken away her objectivity. I would be disappointed if Rachel totally stepped away from the franchise because she is needed. It would be understandable, though. JMO.

Moved from the Fan thread.

@Maggenzm wrote:I am a little concern about them being apart for work for too long, there is a high potential for breakup. JMO, but what do you guys think? JMO

Since this is a fan thread, perhaps the GD thread would be more appropriate to discuss. I will move the post over.

I'm not concerned. I'm sure they discussed in detail the pro's and con's prior to Rachel accepting her new job. JMO's.

Haha, I feel they read our site again! Here’s their take on long distance relationship

These two are stingy with couple pics but here are a couple of nice ones!

Love the Christmas pics of them that Bryan posted. Too cute 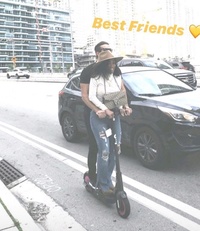 I feel like I am done with Rachel Lindsay. Her relatively lenient treatment of Taylor Nolan vs. the way she treated Rachael Kirkconnell is where she lost me.

I did enjoy her season, very much so. I watched the season unspoiled, and I was one of those in the Peter Krauss camp vs. the Bryan camp. But no matter, the leads are going to choose whomever works best for them, as they should. I have to admit that I was concerned at how hard she rode Peter over his failure to commit. If he was still a contender for her heart at that point, then she would have been justified. But with the benefit of hindsight, it was clear that she had already chosen Bryan, perhaps as far back as Switzerland. So why put Peter through all that emotional angst? Producer prodding? Personal annoyance? That left a big question mark in my mind.

I never really liked Rachel, but I respected her. I felt that she did a very good job as lead. I liked how she handled Lee. I never had any problem with any of her post-show activities or the fact that she has been the franchise's go-to person for racial issues (which she must have found wearisome, indeed.) I am appalled at the ugly, racist things that have been directed to her social media accounts.

I thought she handled the Chris H. interview well. At the time, I felt that she could have gone after him even harder than she did. But with hindsight, I understand why she didn't.

It did start to bother me how relentlessly she went after Rachael K. There was no letup. She allegedly called her, "Rachael KKKirkconnell," which I find appalling and uncalled for. What really tipped me over the edge, however, was how relatively lenient and forgiving she was to Taylor Nolan in turn. To me, what Taylor did was ten times the level of what Rachel K. did. So why is Taylor deserving of grace when Rachael isn't?

So I've come to the point where I no longer have much interest in what Rachel has to say. She can go about her business with my blessing, and I will never say an ugly thing (or anything at all) on her social media. But her thoughts no longer carry any weight with me.  I'm done.

She called her Rachel KKKirkconnell? Wow, just wow.
Not sure how "replacing hate with more hate" is productive.


Don't sweat the small stuff....Strive to live by the Golden Rule

When was Rachel supposed to have said that? It doesn’t sound like her, imo.

@albean99 wrote:When was Rachel supposed to have said that? It doesn’t sound like her, imo.

I think it was on a podcast. There were multiple and repeating fan reports of it on other sites. I could not source it, which is why I put "alleged."

I'm digging around, and it is attributed to Rachel and Van Lathan, which would put it on the Higher Learning podcast.

So, some context. For whatever reason, both Rachel and Van seem to be struggling with the pronunciation of RK's last name. Why, I don't know. In the podcast posted to YouTube on February 11th, Van says, "I want to let Chris and Rachael McKKK, whoever, I want them to know something."

Rachel Lindsay refers to others calling Rachael names after Rachael posted her apology -- "So I have a huge issue with, 'The franchise told you not to do it.' "You should be so outraged and enraged that people are speaking about you and calling you 'Rachael KKK.' I've seen 'ConfederRachael,' all these different things that are out there in regard to you. And if those things aren't true, or if maybe there's some truth, as you said in your apology, then you should speak out. You should have put this statement out sooner."

That's the one reference I could find. So I can't say for certain that Rachel L. originated it. But she seemed to have no problem with propagating it.