I am considering signing up for IG just to follow them. They make me smile and giggle.

@stuckinsc wrote:I am considering signing up for IG just to follow them. They make me smile and giggle.

I don't follow many on IG and only use it on the computer but I had to start following them after Tuesday's show. Looking forward to more fun stuff from both of them! 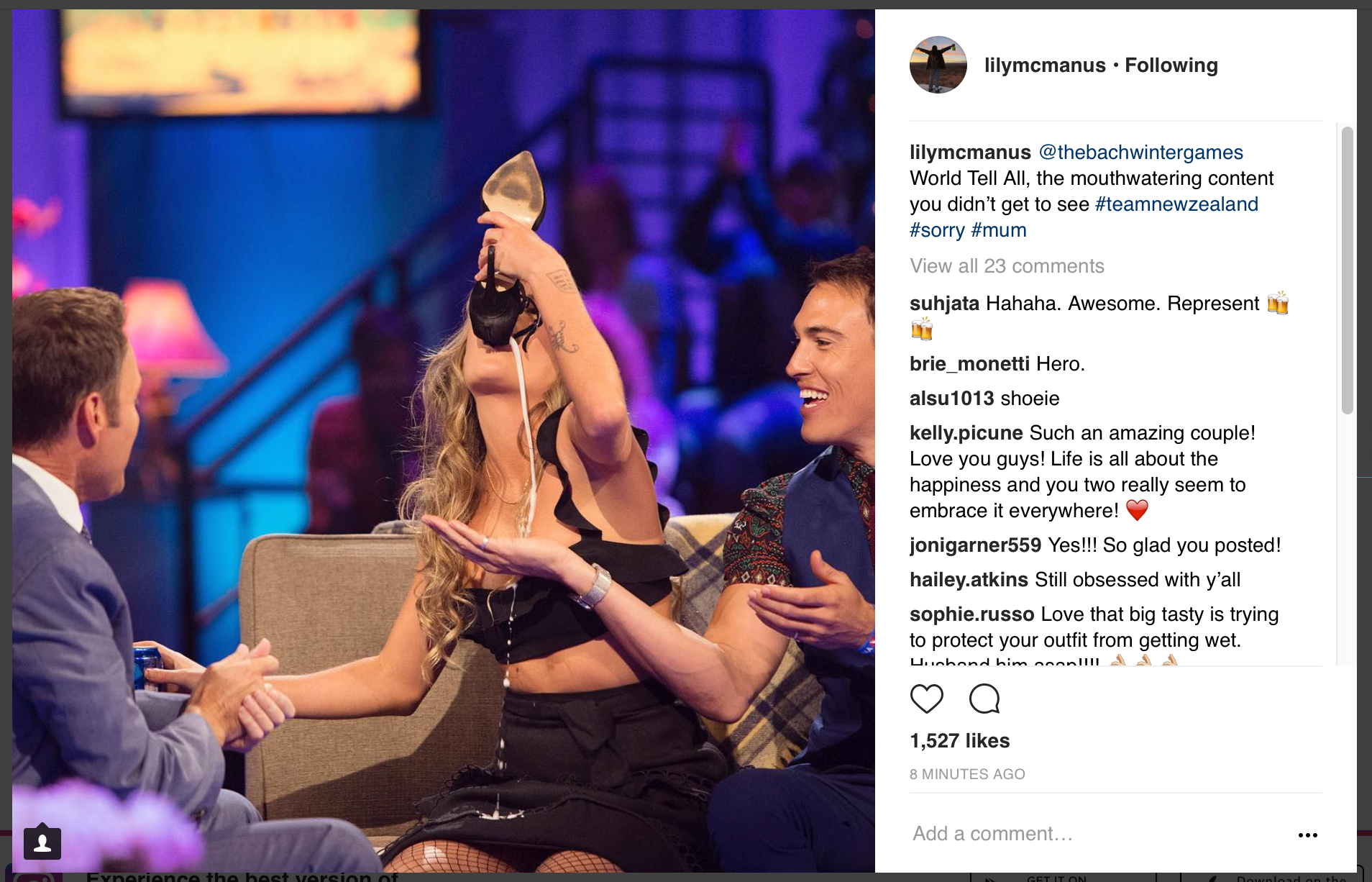 I love these two!

Wish we could watch an unedited  WTA. (Even if it's 6 hrs long, haha).    I feel like we miss out on all these cute moments.

A little embarrassed how many times I've watched their road trip montage back again - they're adorable!

I'm hanging out to see the full thing. Courtney said it would be up on YouTube soon.

Courtney posted a photo on IG of them on the couch that totally caught my eye...

You can see a little bit of them in this photo.  Someone said in one of this threads that she has a hippie soul and this definitely shows it.

She looks great in them too!

I really like Courtney but the reason he was seen as insincere a bit on his season was because he played a bit of push and pull where he would show interest and then withdraw and then when questioned about it he started kissing and showing affection and things. Then he'd go back to being more aloof and then questioned again. So it wasn't like Courtney himself decided to leave because he wasn't feeling it, he was asked to leave only after being questioned again. It was a pattern with him and I think he wouldn't have been seen that way if he'd chosen to leave on his own. I think he wanted to be on the show so as to get more fame and opportunity, just like most contestants. Exact same reason Courtney has moved to LA for fame and opportunity. I don't pretend he's there for any other reason even if I really like him personally. Many other contestants who move to LA are seen as fame-hos and opportunists even if they've been in entertainment and things. So to me Courtney is the same but he's likable which gives him a pass. jmo

Love these two! They crack me up

They're just so much fun and fun-loving.

Not only are they on the same wavelength as each other and in love, I can tell they really like each other and are like best friends. They're such a joy to follow

Although Courtney is silly and goofy I also think he showed real maturity in guiding this relationship. Sparks flew instantaneously between them but he very much brought real world elements into the mix IMO to give the relationship a real chance to become something special.
Things that stood out to me:
- their first kiss appeared to have been when he walked her to her room door.  So much like an ordinary date where a guy walks a girl to her front door and navigates that first goodnight kiss. It was also not in full view of the cameras or housemates. Semi private and gave her some room to refuse.
- wonderful approach to the FS card. It was never read. He said something about foregoing the FS to instead stay in separate rooms, rather than the other way round, then validated her by telling her he was falling in love and they would have plenty of time in the future. So respectful to take charge and make it all so easy and loving.
- in one of their interviews they talk about how they just created their own dates all the time instead of waiting for a date card. A great way to bond, find common interests, and just have fun while getting to know each other. Couples don’t sit around waiting for someone else to plan their social life in RL so IMO this was wonderfully realistic teamwork in an unrealistic environment.

they really do appear to like each other, as in like being around each other, and in the process of having fun their feelings grew into butterfly love. They exude giddy and it’s the sweetest thing in the world to see.
Couldn’t help but smile whenever they appeared on screen. Such a valuable reminder that dating and falling in love should be fun. Contagious

I thought their first kiss was Lily going in on Courtney on the first episode almost at the beginning? It was too cute because she just went in and initiated planting one on him

ITA about their relationship being more natural and realistic. I think they benefited the most by not winning date cards so not having to film 'staged' dates. So more of a BTS and off-camera relationship (similar to Clare and Benoit).

Traveling together on a road trip is a perfect way to see if one is truly compatible. To me it showed me they enjoyed each other's company and had fun together along the way - a sort of metaphor for life as partners in how they would navigate their relationship (how to handle stress and change and adapt to things).

That their trip together across the country strengthened their relationship showed me they are like best friends who have the hots for each other (friendship on fire) and truly enjoy each other's company - essential for healthy relationships imo. I am hopeful they have a lasting love

Bold and possibly unpopular prediction here: IMO this time next year, Courtney & Lily will be the only WG couple still together.

On Ashley's podcast she admitted her and Kev had been bickering over who would move and Benoit said he hadn't even been to Clare's hometown but was "expecting" to fall in love with it.  Neither couple seemed to have spent much time together in the "real world", and I've never been 100% convinced by Dean & Lesley.

Courtney & Lily on the other hand didn't seem to give the moving topic a second thought - they wanted to be together so they worked something out.  Rather than try to "win over" the other person to move to their country they BOTH gave up their homes/families/businesses to start afresh in LA.  Says a lot, IMO.

They seemed to spend as much time as possible together in the house (I started taking screen caps of them in the background of other people's shots but they were literally together ALL THE TIME so it seemed like a moot point) and then the road trip would have really cemented things as you say @AllAboutLove.

In the beginning I thought Courtney wouldn't have the goods to keep Lily interested long term but I saw a different side to him on this show and I really do think they complement each other perfectly (although I may be biased because of course they're now my favourite Bach couple of all time).