Me and @Ladybug82 keep looking for them, but don't see any CH's blogs. I have looked today. I have no idea if he's doing them, I don't recall reading anything that he wasn't. Maybe I'll tweet him.

IA with those who are bored. I keep looking for anything to sleuth. I'm so turned off by Becca pulling everyone towards her so she can kiss them or going in for a kiss which each time looks so awkward. It's as if she's trying to be sexy and it's coming off all wrong.
I'm glad she had an instant connection with Garrett because IMO the other top two guys are simply not a match for her.

On the subject of blogs, did Becca have one? I can only see Ep 2 on People.

It seems like this season really got a short stick.

I am enjoying Becca as a bachelorette. I like how vulnerable she is. I actually really enjoyed the last episode and I was entertained. Clay is such a sweetheart. 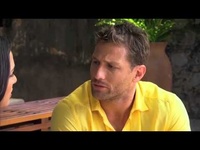 I don't know what's up with the blogs. I'm tired of looking for them every day.

I know @GuardianAngel. I have been looking for them too. Like I said, almost like TPTB know it's a waste of their time this season and they don't want to put that extra effort in....makes you wonder how they feel about Becca after all......

I don't think it has anything to do with Becca.  She seems well liked so far.  I've yet to hear anyone say anything bad about her whose interviewed her, fans that have run into her, etc.

MF's busy and interested in his new show and BIP.  And they've been bombarded with scandal and drama from the (IMO) idiots cast this season.  I'm hoping the whole screening and casting departments have been fired so that we get better dudes next time, instead of so many duds.

I finally got around to viewing the entire episode. My thoughts --

The spa group date -- nice to see "the girls" again. This date didn't seem so much a "let me get my girls' opinions on the men" as it seemed like a mixer for future BiP cast members.

The Tia/Colton/Becca drama -- at this point, I'm going to give it a big shrug. Tia and Colton are hardly the first pair to put a nix or a hold on a relationship so that one can go off and do the show. It's not a big deal as far as I'm concerned. Tia seemed clearly smitten with him. Colton was harder to read. IMO most cast members go on the show for a mix of reasons (to advance their careers and/or media exposure, to have an adventure, to maybe find love,) but with Colton I'm getting the feeling at present that it's clearly out of self-interest. Time will tell. If I were in Becca's shoes, I'd be wary.

The one-on-one -- Chris is not someone who has stood out to me. Selecting him for this date is a puzzler. Nice guy, and a sad backstory, but zero chemistry with Becca. It felt like a pity rose.

The Jordan/David drama -- I still find Jordan (unintentionally) hilarious. "Professionality," what a great and absurd word. I think if Jordan had even a speck of self-awareness, he would be amazing. He could do the same schtick but with a sense of irony. As for David, he is playing right into it. Come on, David, you know better. Or you should.

I love how the other guys were hiding their laughter at the theatrics. I'm not sold on Jason as a future Bachelor, but he seems like a good guy.

The football game -- fun at first, but later on some of the tackles seemed excessive for amateurs. I will miss Clay. He was one of the best things about this season. I wish they had sent him on any other date, but this show is all about the obvious. If it's any comfort to him, I don't think he ever had a chance of making the F4. F6, maybe. As an aside, I've broken a lot of bones in my life (active sports, yay!) and the wrist was by far the easiest, quickest, and best in terms of healing. I wish him well.

Garrett -- Becca's chemistry with him is off the charts. Even if I were unspoiled, I still think he would be an easy pick for F1.

Blake -- she has a sweeter vibe with him.

John -- love his smile. I need to see more of him!