@spangler wrote:So just to recap, whose ig stats haven’t changed yet so we can figure out if they’re still in the running?

Chelsea's stats have fluctuated slightly but not enough to convince me she's out.  Ruffles we haven't even identified yet - if she was out I'd think one of our super sleuths would have spotted a pic, a follow, a comment on someone's IG, but still nothing, so I think she's still there and remains my preseason pick for F1.

I could see Chelsea and Ruffles as the final two, with Chelsea as the "obvious choice" being an engineer, but him picking Ruffles instead.  I wouldn't be surprised if Ruffles is a baker or florist or something not academic (nerds/academics don't automatically want to date other nerds/academics from my personal experience).

Others who haven't been identified on SM include Brought dogs , Marshmallow Girl and Feather Headdress.  Not necessarily saying any of them are top 4, just that they haven't blatantly ruled themselves out of contention by cross-following and commenting on each other's Instagram posts like the MOTs have.

Thanks Bobette!
Do we assume that niki hanafin or whatever her name is is also in contention because of the Sportsbet odds? Or have her ig numbers been moving?

@spangler wrote:Thanks Bobette!
Do we assume that niki hanafin or whatever her name is is also in contention because of the Sportsbet odds? Or have her ig numbers been moving?

@Agent99 found Nikki and said the thought she was out so I presume she had observed some SM changes, yes.

I was thinking the Sportsbet odds implied there was someone under 25 in the top 4, since the numbers went from 7:0 for the <25 age bracket in March, to 3.5:0 in early May around the time hometowns would have been filmed, however it might just mean there are a few young girls in the overall mix and they are trying to attract more bets on the lower bracket.

IMO they are away filming the finale at the moment. Osher hasn't posted a story in the last 24 hours, and his last post was on Election Day, but it just showed his hand, and the sausage sizzle at his polling booth, so it could have easily been recycled from another election. So annoying that Matt isn't properly on social media like Matty and Nick were during filming. We'll have to watch for Chelsie's stats changing as she gets home...

@Dirty Street Pie wrote:IMO they are away filming the finale at the moment. Osher hasn't posted a story in the last 24 hours, and his last post was on Election Day, but it just showed his hand, and the sausage sizzle at his polling booth, so it could have easily been recycled from another election. So annoying that Matt isn't properly on social media like Matty and Nick were during filming. We'll have to watch for Chelsie's stats changing as she gets home...

ITA @Dirty Street Pie - they are most likely filming the finale this week IMO and I'm also watching Chelsea's stats like a hawk.

@Agent99 If you are able, please keep an eye out her friends' FB pages for "she's back!"-type posts/comments.

) and the fundraiser seems current. 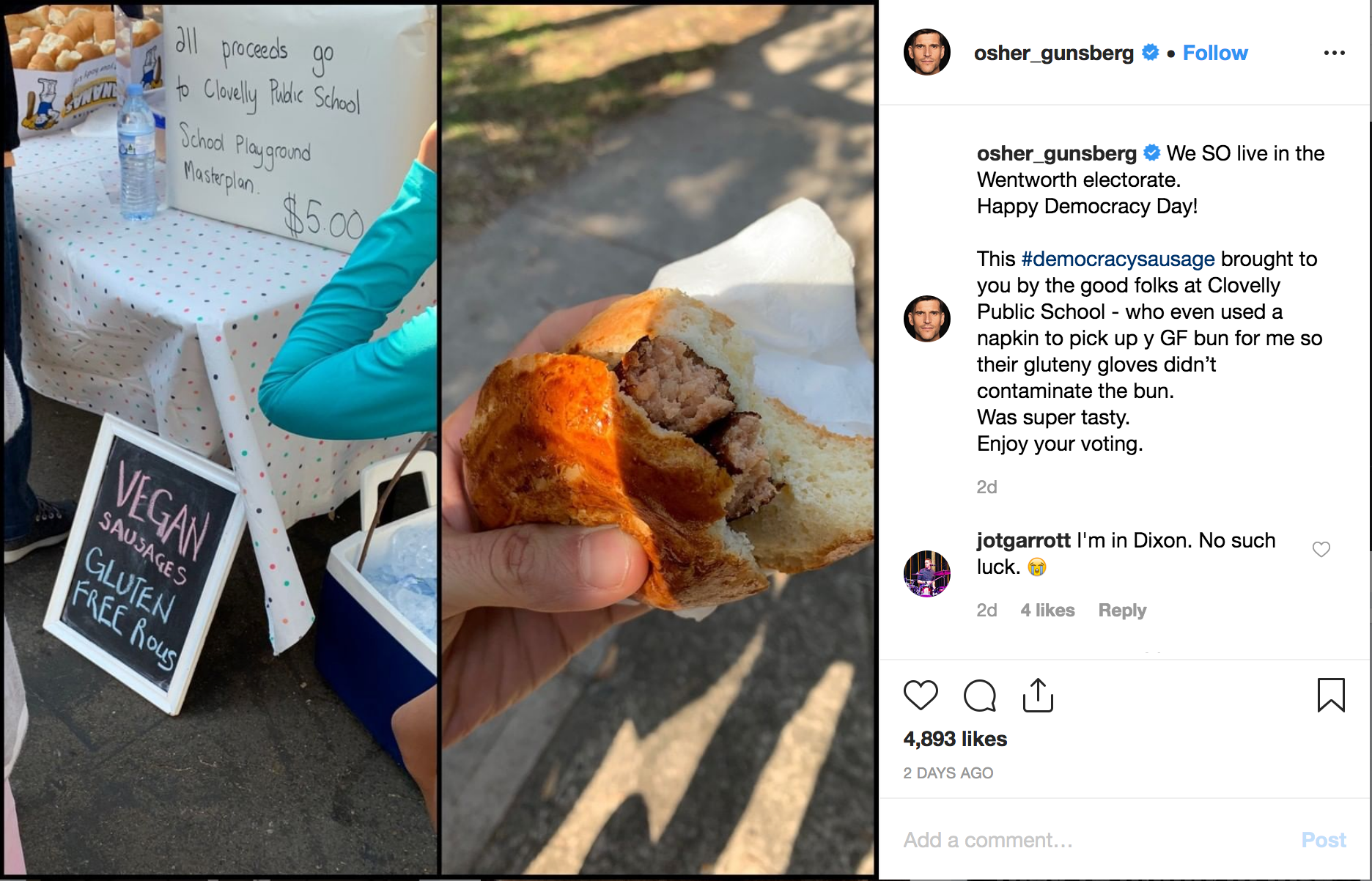 MAY 24 CPS Lovelly 2019 - "Smoky and Sweet", a food and wine pairing experience by Clovelly Public School P&C Join other members of our wonderful school community, while helping to raise significant funds for the CPS playground master plan, in celebration of our local community and kids!

With all cast & crew required to vote, they may have had to stay in the country till Saturday? BUT!  I would not be surprised if they jetted out on Sunday (assuming the FRC is overseas)...

I thought the exact same thing as Osher hadn't posted for a couple of days, but right on cue, a post appears. Nothing current though, so probably posting on location.

Bringing this here from Chelsea's thread for further discussion:

@Agent99 wrote:That's what I'm thinking too @Bobette.  Osher just tweeted 4hrs ago, it's 7am here

.  He must be in a different time zone.

Fiji is a good pic DSP but also I read early on that Mat's ideal date is skiing - can't see them forking out for a trip to Europe but maybe NZ?

Great thinking @Bobette although I just googled the slopes at Queenstown, and it looks a little bare at the moment

I also googled heliskiing in case there was more snow higher up, but couldn’t make a booking till July, so whether that because they don’t do it till then because of the snow, or it’s booked out, I don’t know.

when trying to sleuth. I give you all credit!!

@Dirty Street Pie  Is it possible they booked a block of days to film and no one else can purchase tickets?

FRC is definitely imminent IMO.  I'll try to find where I read the bit about skiing.  Would be unusual not to have a tropical FRC but Matt is not the typical Lead and hopefully F1 & 2 aren't the usual either - would be great to have a fully clothed finale.

Matt's idea of a perfect date is either something low-key like a cozy dinner and a few drinks or skydiving in New Zealand and staying in an ice hotel or watching the aurora in Scandinavia he told us.

Current time in Norway/Sweden is approx 3am so Osher's IG post from 6am Central AU time would have been around 11pm Scandi time I think? Checks out for an after-work wind down post IMO.

If they saved money on a civilian Lead maybe TPTB could afford to fork out for flights to Europe?  A FRC watching the aurora would be spectacular and thematically appropriate for an astrophysicist.

I will now be really disappointed if this doesn't happen. 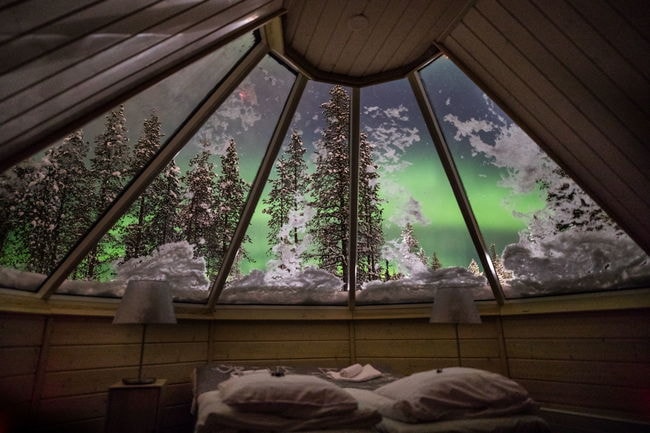 May not be the right time of year though.  Damn.

The Northern Lights season in Finnish Lapland spans from mid-August until early April.

Are they in Sweden now? Would Finland be an option? US Bach Nick Vial's FRC was in Finland in the middle of winter. It looks like there are plenty of ski resorts still open this time of year if I'm reading this correctly. Sorry I don't recall where we think they are atm.

In the spring, from February onwards, nature provides all the light one can imagine and turns Lapland’s fells into sunny ski paradises. A number of events are organised in resorts around the region, celebrating togetherness and the best time of year for skiers and snowboarders.
https://www.visitfinland.com/article/ski-lapland/

posted while I was searching Nick V's FRC details.