I’ve always said that if Chelsea is not F1 then it has to be an intruder imo.

Considering 8 intruders arrive on the 2nd episode then it’s very possible that one of those women are the F1. Totally believable not just betting-odds-wise but because it’s the 2nd episode they’re on even playing field with the original women since it’s when Matt has just met them anyway.

Will have to see what the odds are like after episode 2 and the intruders arrive. If an intruder has odds favorite to win it will be a done deal. If it’s still Chelsea then I’d still think it’s her.

Apologies for back to back posts. Just had a thought.

If Chelsea is not F1 and an intruder is F1 then it completely makes sense for Sportsbet to push Chelsea and get some fast money *before* the real F1 shows up as an intruder on the second episode. SB is super shady and it’s very much their style to be shady so no scenario (Chelsea winning or not winning) and using it to their advantage will surprise me.

@AllAboutLove Yes that's exactly what I'm waiting for too.  The full list will clarify things IMO.

That means for almost half of Sophie's season, F1 wasn't even an option on Sportsbet's list.

@AllAboutLove wrote: If Chelsea is not F1 and an intruder is F1 then it completely makes sense for Sportsbet to push Chelsea and get some fast money *before* the real F1 shows up as an intruder on the second episode. SB is super shady and it’s very much their style to be shady so no scenario (Chelsea winning or not winning) and using it to their advantage will surprise me.

YES!!!  This is exactly what I have been saying.

dodgy for sure. It’s probably why the list of women haven’t been released since the intruders arrive 2nd episode so the night after the premiere they’ll be seen. Equal footing pretty much and the earliest a group of intruders have arrived. Perhaps the betting sites know something like you’ve speculated

@AllAboutLove It just seems so incredibly suspicious to me.  Upthread I posted snippets of Sportsbet's media releases in previous seasons.  They are all misleading.

Quoting myself below from the SM thread - the wording of Sportsbet's "leak" is deliberate IMO.  They conveniently don't outright say Chelsea is the winner.

"IF the select few people who know who wins have placed bets..." is perfect, because then if/when someone else wins they get to throw their hands in the air and say "oh no way man, who saw that coming?!  Chelsea and Matt are, like, sooo PERFECT together! Oh well, I guess those sneaky producers fooled us all hey guys? Better luck next season!" [or better yet: Try the ponies instead!]

What better way to make some quick cash than to open betting early, have the girl who's most hyped in the media as the current favourite, and then "leak" her name.

People rush to open an account, thinking Chelsea's a sure thing.  If she's not F1, Sportsbet can play dumb.  All they've done is said She's the current favourite.  Which she is.

If she is F1, they lose money, but X number of suckers now have money stuck in their betting account, which is awkward to withdraw from, so will probably be re-bet (and lost).

The thing is, considering Sportsbet could "attract" punters in ways other than leaking the winner (and thereby deliberately losing money) why on earth would they do it?

they’re super shady that’s for sure. Plotting away. Now too long to see

@AllAboutLove wrote:Oooh nice! Thank you for finding and posting all that!

Do we have any stats for other seasons for Bach AU F1 other than Laura’s? Because it could be that Laura is the outlier and things aren’t being done differently this season but we’re done differently for Laura.

Iirc for Alex she had the early odds favorite but Nikki did for a bit too. Not sure about snez.

I do recall though how discussion regarding Laura’s odds were unprecedentedly low.

So I’m not sure that she is the base line to compare to considering there’s 5 other seasons for F1 and she’s only 1 of them (excluding Honey Badger).

@AllAboutLove, I wasn't sleuthing during the early seasons but Nick's is an interesting one to look at since there was no F1 and something seemed "off" from the beginning.

The early figures pointed to Brooke as F1, then Sophie, then Britt.  Her odds got very low, making her look like a rock solid favourite (and Sportsbet were touting her as such in media releases).

It was really weird how the favourite flip flopped so much, and max bets were suspiciously high throughout the season.  They then shot up to a massive $1000 for all girls right before the finale.

Can't quote from his archived thread but have taken some screen caps. Sportsbet was one of the biggest clues Nick chose no one which is why all this Chelsea business has me

ETA: To clarify, we had already sleuthed that Brooke would walk which is why we only focussed on Britt & Sophie. Also, @Sundy your comment about it being a bumpy year for the franchise was spot on... and then BiP made things even WORSE! 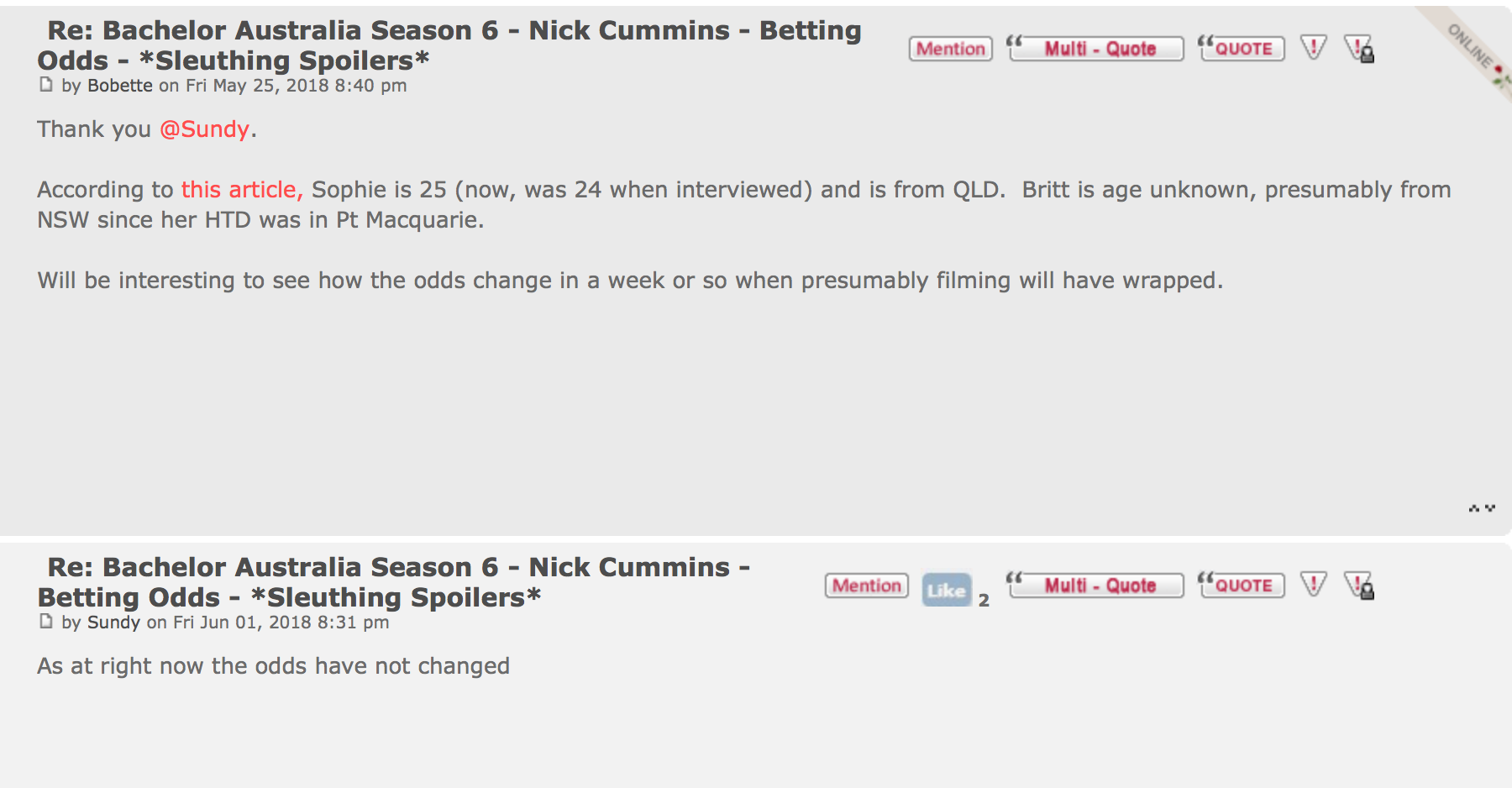 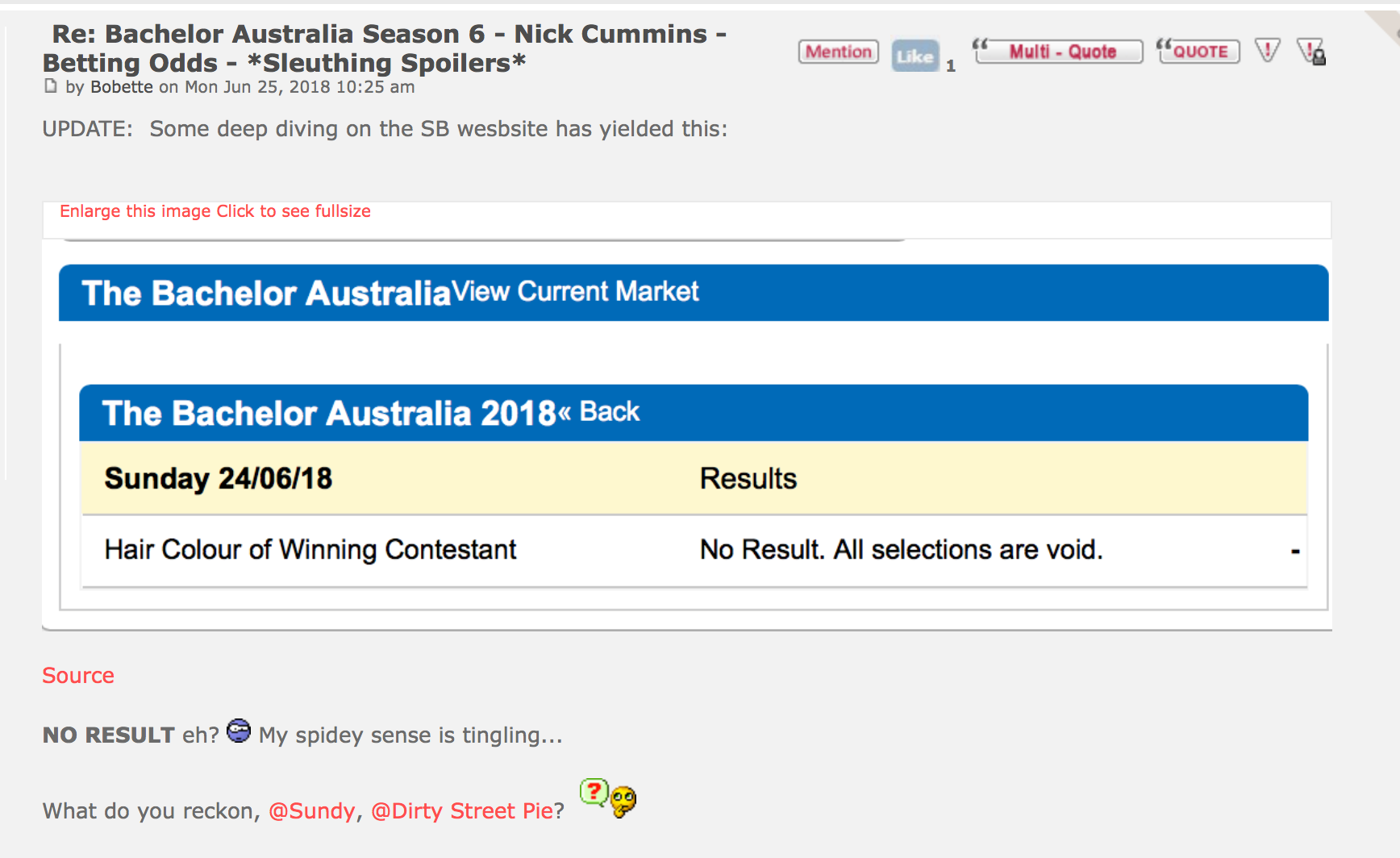 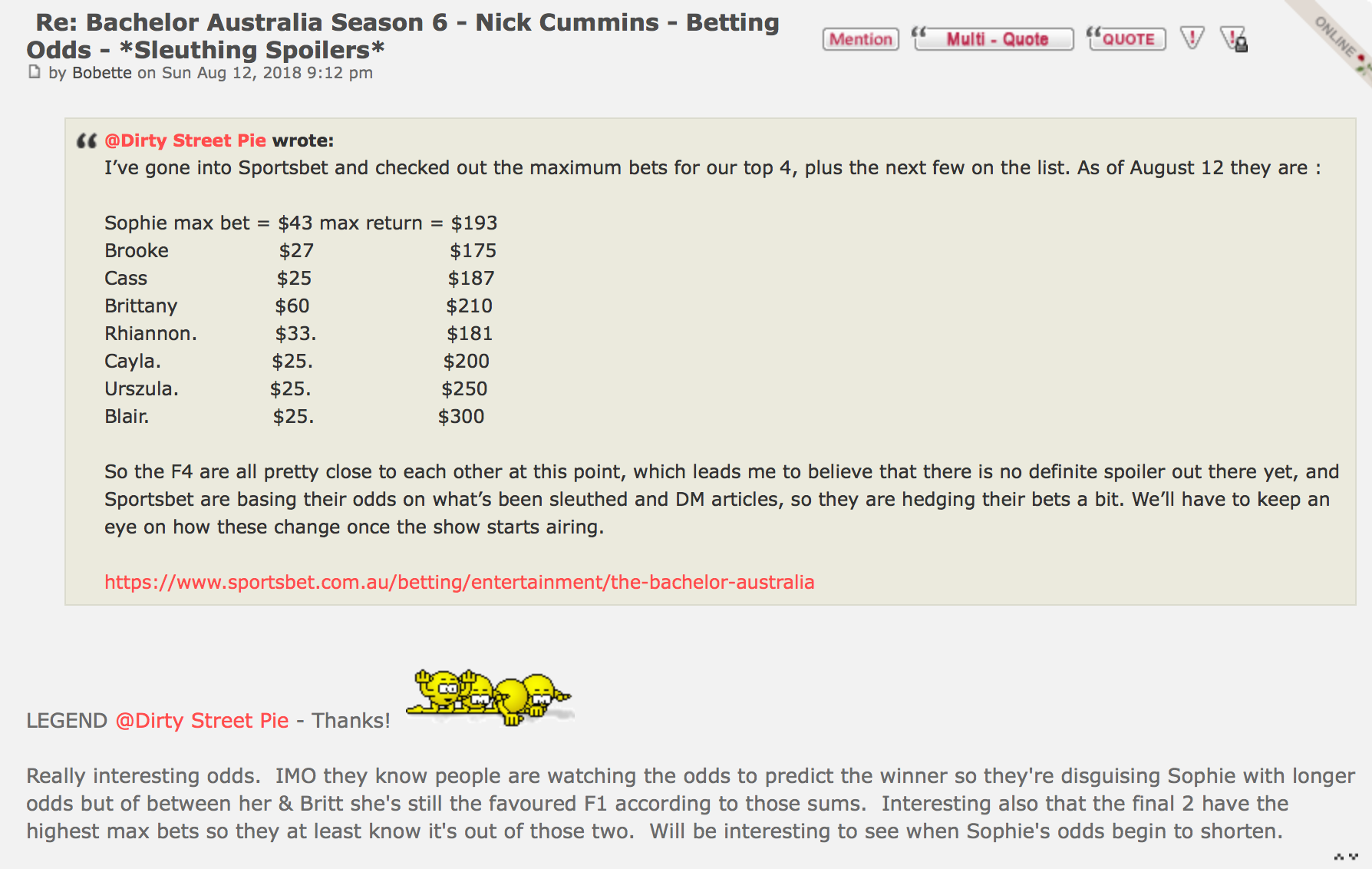 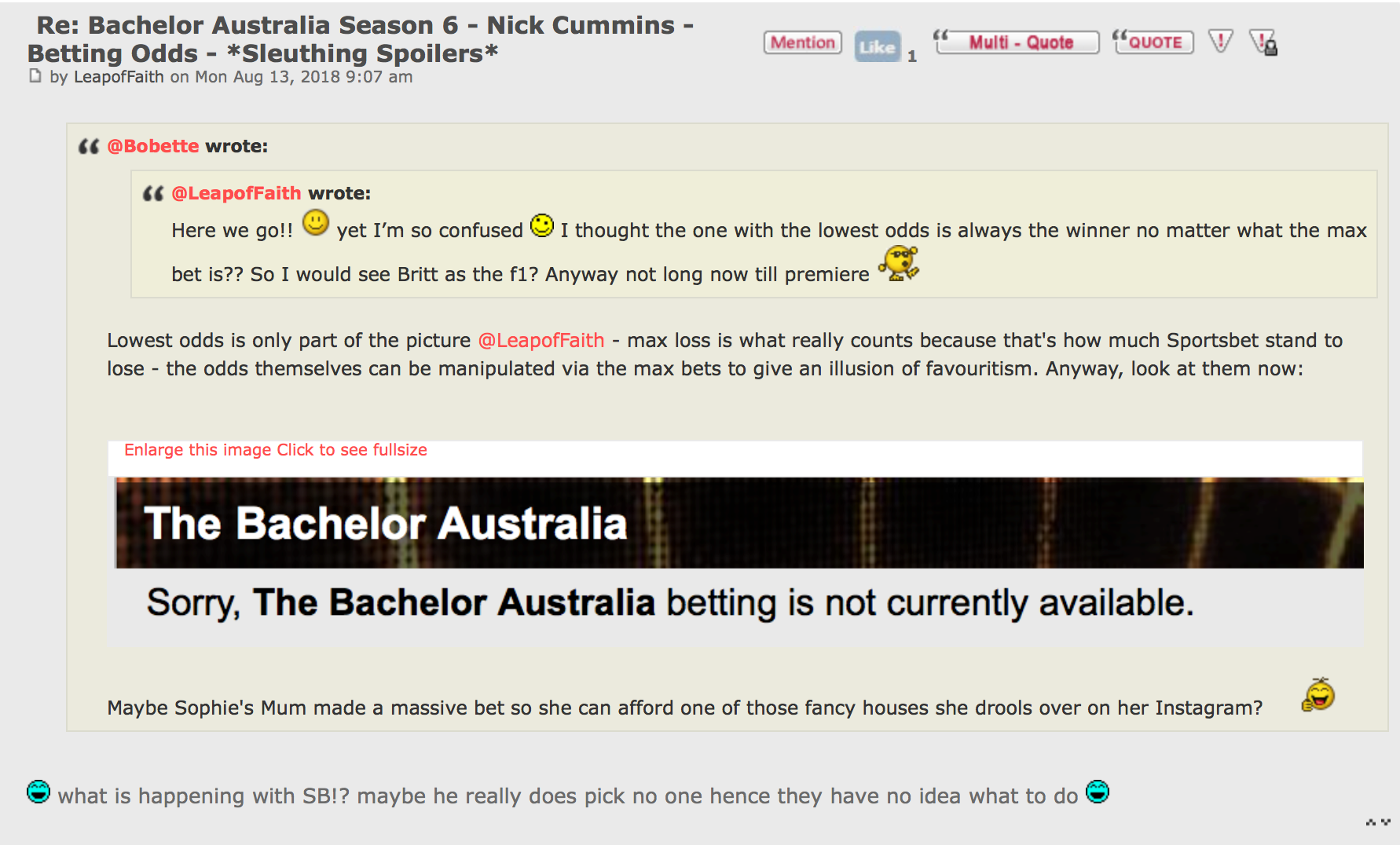 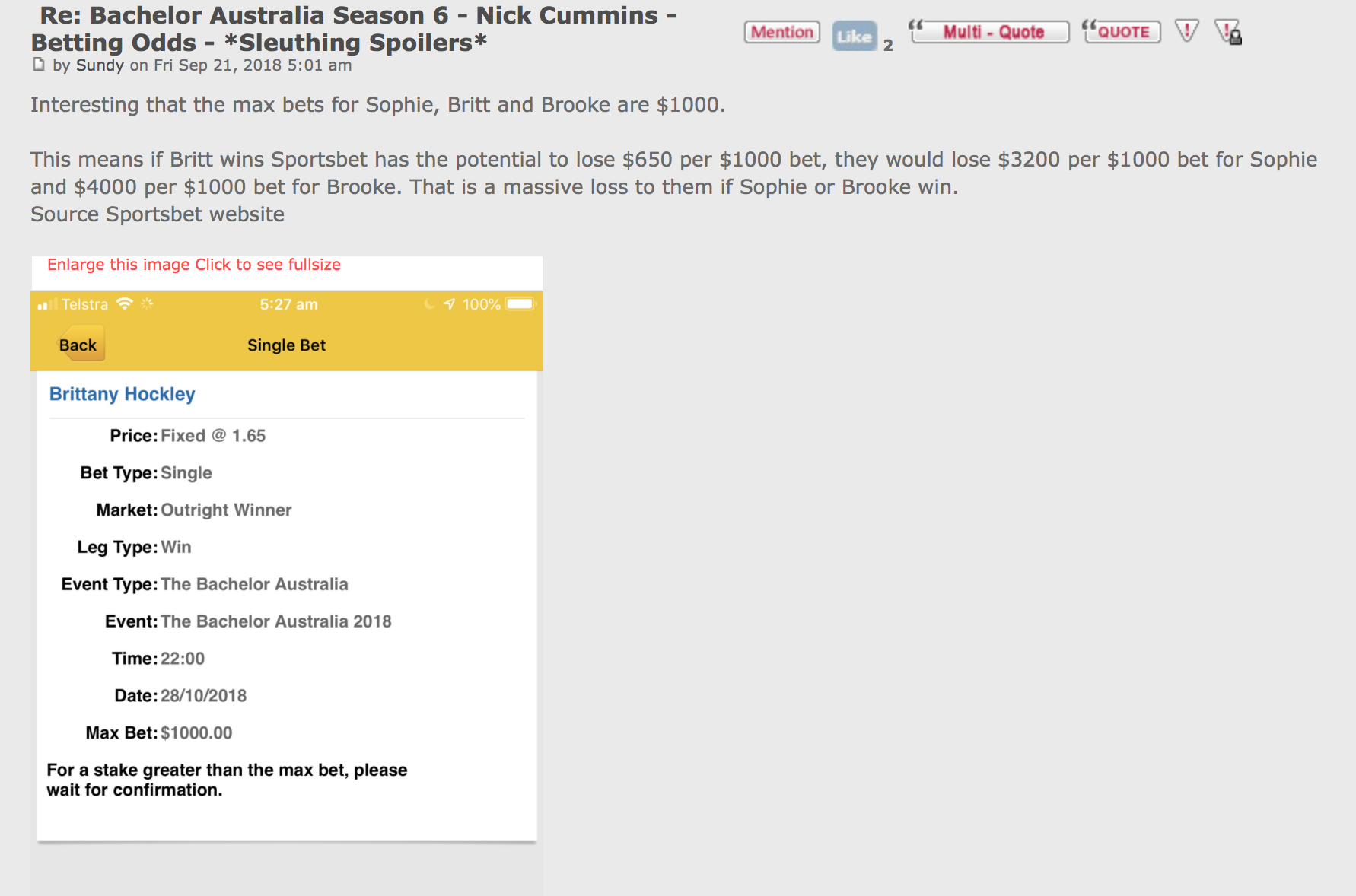 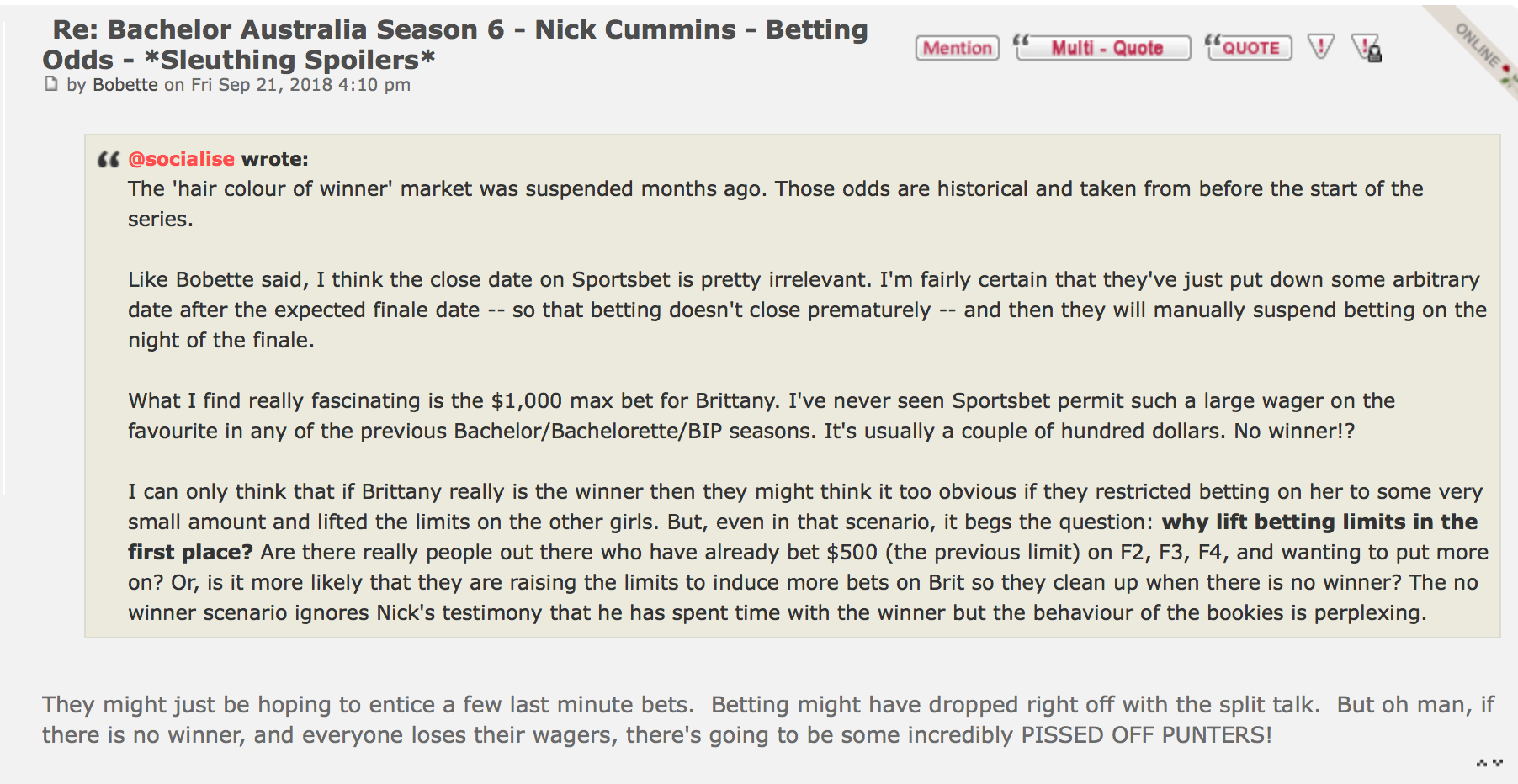 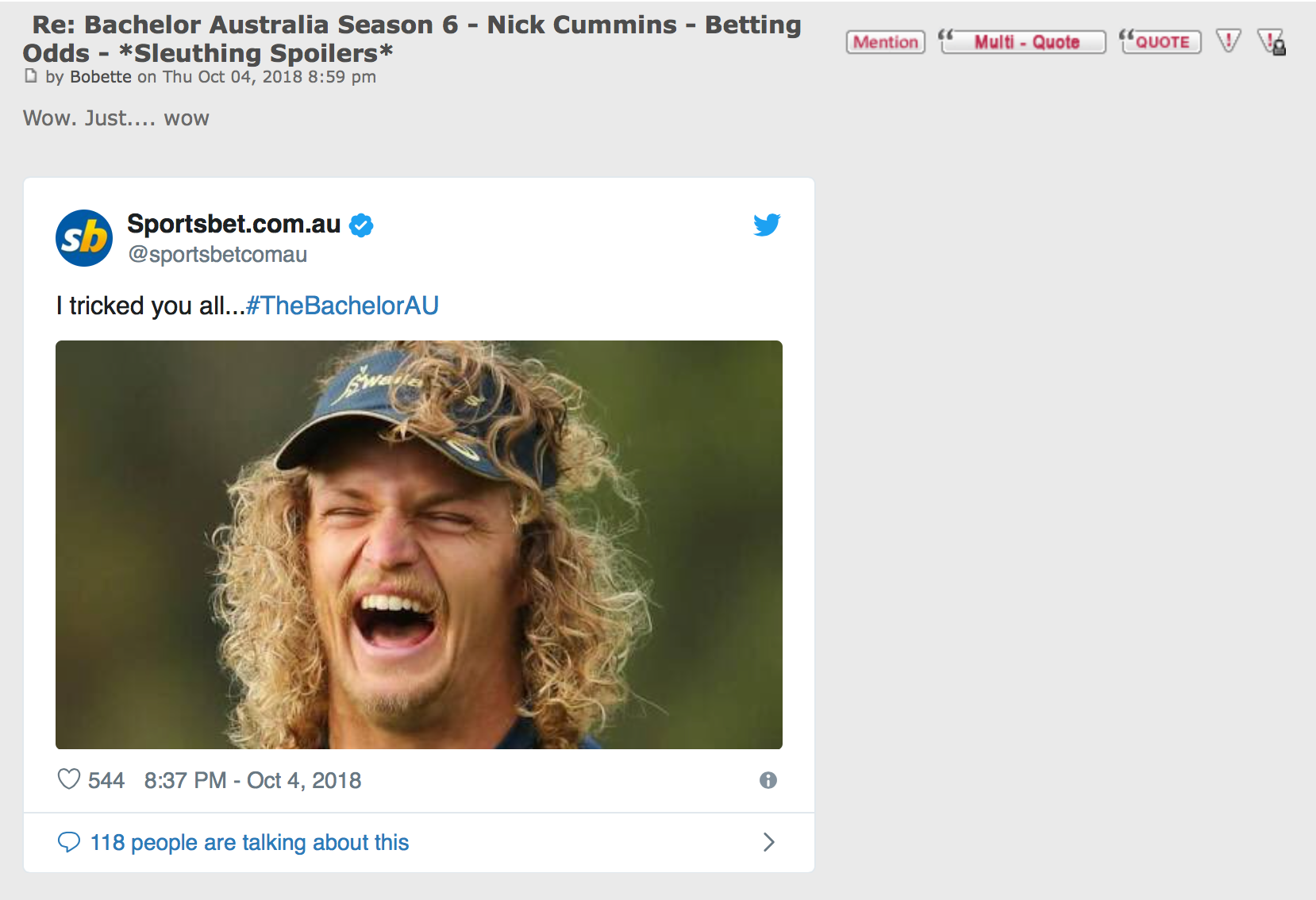 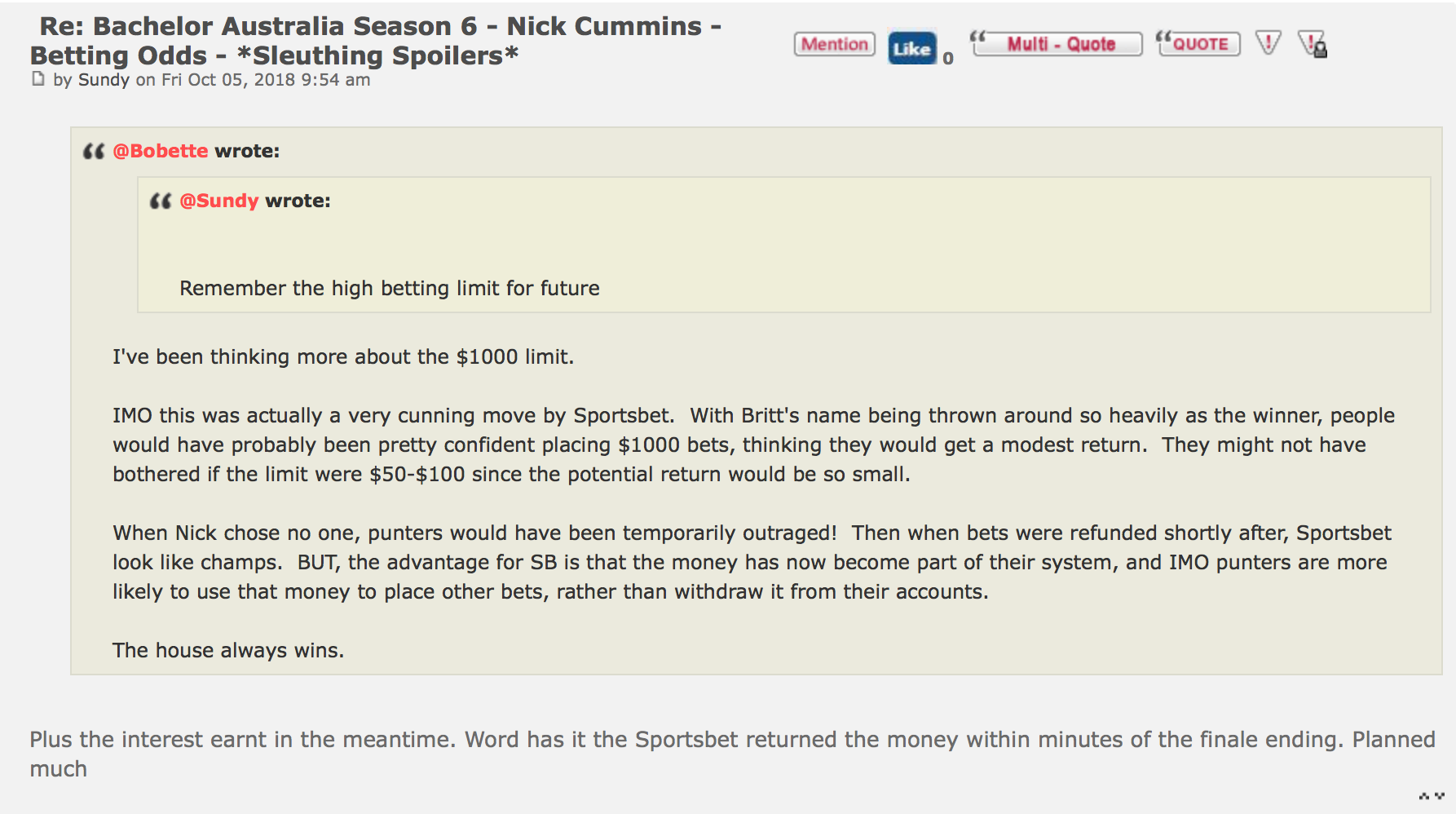 Thanks for all that @Bobette

Any odds yet now that all the contestants have been released?

@AllAboutLove no still just the initial 6.

I think they must release the odds before the premiere though since with Ali I can remember paying close attention when she met Taite. I'll pop over now to her thread and check...

ETA: For Ali's season the bios were released on Sunday and the first odds Monday morning around 10am.

ETA Ok, I remember who Sam is now. Can’t see why she is the decoy, apart from being a long haired blonde from Victoria, maybe they are hoping people will get her and Chelsie mixed up?