Title of the thread is not complete so we don't spoil for West Coast.

WEST COAST - IF YOU ARE VIEWING THIS THREAD PRIOR TO THE END OF THE ATFR YOU WILL BE SPOILED.


HANNAH BROWN WILL BEGIN HER JOURNEY TO FIND FIERCE LOVE AS THE STAR OF ABC’S HIT ROMANCE REALITY SERIES ‘THE BACHELORETTE,’

WHEN THE MILESTONE 15TH SEASON PREMIERES, MONDAY, MAY 13


In Celebration of This Monumental Season, Chris Harrison Hits the Road with Bachelor Nation Super Fans, Driving Down Memory Lane and Reminiscing About 15 Seasons of Romance,

a Two-Hour Special Airing Monday, May 6, on ABC

Hannah Brown caught the eye of Colton Underwood early on during the 23rd season of “The Bachelor,” showing him and all of America what Alabama Hannah is made of – a fun country girl who is unapologetically herself. After meeting Colton’s family in Denver, Hannah was left shocked and heartbroken when he unexpectedly ended their relationship that same evening. Returning home gave Hannah the time to reflect and heal from her breakup, gaining a powerful understanding of her desire to be deeply and fiercely loved. Now, with a newfound sense of self and a little southern charm, she is readier than ever to find her true love, when she stars in the milestone 15th season of “The Bachelorette,” premiering MONDAY, MAY 13 (8:00-10:01 p.m. EDT), on The ABC Television Network, streaming and on demand. The announcement was made tonight on the live season finale special of “The Bachelor.”

In anticipation of this journey, viewers will celebrate 15 seasons of romance with Chris Harrison as he hits the road with Bachelor Nation super fans, revisiting some of the most memorable dates and unforgettable moments from “The Bachelorette” history, leading to a Bachelorette reunion like no other with special surprises along the way, on “Bachelorette Reunion: The Biggest Bachelorette Reunion in Bachelor History Ever!,” a two-hour special airing MONDAY, MAY 6 (8:00-10:01 p.m. EDT).

Now working as an interior decorator, Hannah enjoys helping transform people’s houses into homes. Having grown up in a loving home of her own, Hannah looks up to her parents as an example of the kind of love she wants one day. Whether she is running around with her two golden retrievers, taking over the dance floor or belting out country tunes, Hannah enjoys living life to the fullest. All that is missing is someone who will choose her every single day.

Hosted by Chris Harrison, “The Bachelorette” is a production of Next Entertainment in association with Warner Horizon Unscripted Television. Martin Hilton, Mike Fleiss, Nicole Woods and Bennett Graebner are the executive producers. “The Bachelorette” is broadcast in 720 Progressive (720P), ABC’s selected HDTV format, with 5.1 stereo surround sound.

2019 American Broadcasting Companies, Inc. All photography is copyrighted material and is for editorial use only. Images are not to be archived, altered, duplicated, resold, retransmitted or used for any other purposes without written permission of ABC. Images are distributed to the press in order to publicize current programming. Any other usage must be licensed. Photos posted for Web use must be at the low resolution of 72dpi, no larger than 2×3 in size.

For more information on “The Bachelorette,” visit ABC.com.

Cheat tweet:  After a shocking and unexpected breakup with Colton, Alabama Hannah is back and ready to begin her search for fierce love! Follow @HannahKBrown11 along on her journey as the next #Bachelorette on @BacheloretteABC, premiering Monday, May 13. #ABCPublicity

I was hesitant at first, but I can't help but get excited for her and the season! She just seems so dang genuine, like she wouldn't know how to be fake even if she tried. I'm a little worried for her, but cautiously optimistic!

Haha I'm very nervous for her. She's just so likable though. Please just let her F1 be a decent guy.

I wonder if the FIR pattern will be broken this season? And if the FIR tonight was the only one of the season or if there will be another one at the M&G?

@Aria wrote:I was hesitant at first, but I can't help but get excited for her and the season! She just seems so dang genuine, like she wouldn't know how to be fake even if she tried. I'm a little worried for her, but cautiously optimistic!

The bolded is why I’m so excited to watch her. I also really believe that she genuinely wants to find someone so hopefully there are few good ones in the bunch. I was laughing and cheering the whole time watching her so I hope they don’t edit out too much of her personality.

Here’s everything you need to know about the newest Bachelorette! https://t.co/Opy7u74rzl 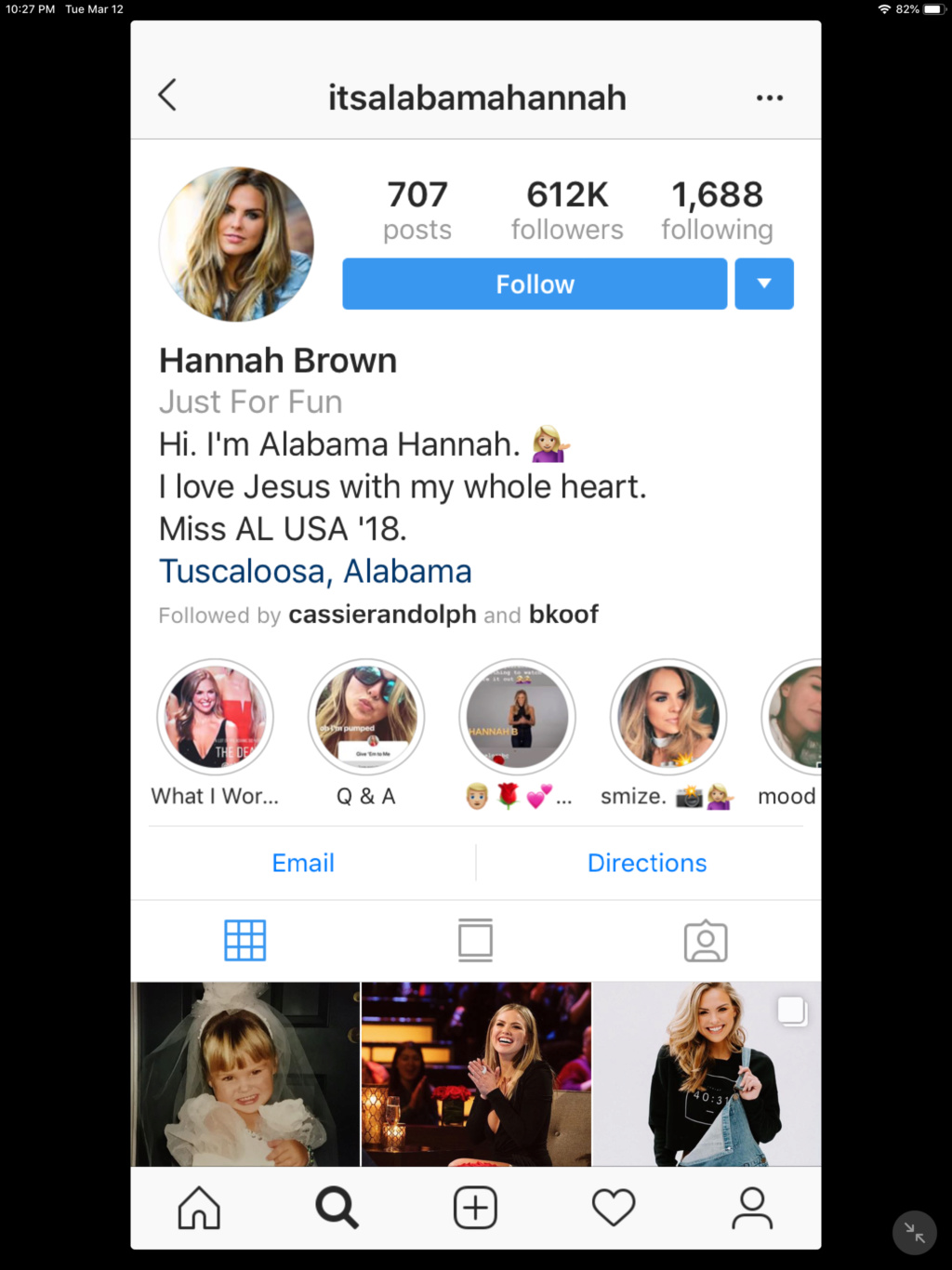 @bluwavz wrote:Haha I'm very nervous for her. She's just so likable though. Please just let her F1 be a decent guy.

I wonder if the FIR pattern will be broken this season? And if the FIR tonight was the only one of the season or if there will be another one at the M&G?

She is so funny. I love her sense of humour. Hopefully that makes up for the nervous speech flow (which may end up annoying some ) when she is trying to be Serious you know ? If she uses humour she will be good imo.

I think one way to get around the FIR past trend is to have her handout multiple roses on the first episode prior to then RC like Sean’s season. IMO Hannah may let her nerves blind her from real connections on night one. Though I did think the roe she gave out was pretty great, she actually wanted to do it ! Cute.

I really like Hannah B. She was nervous during her first mock RC and that made it seem more real to me. I think she will do great.

The Bachelorette seems a little less dramatic than the Bachelor to me, so I may give her season a go.

Hannah B. is definitely going to be a heartbreaker as #TheBachelorette!https://t.co/3IAyPzInZP

Hannah - "This is the hardest decision I have made this season".

"To those of you that do not get this rose I can't wait to see you all back at the mansion and you know....Try harder".

@nd4reality wrote:Hannah - "This is the hardest decision I have made this season".

"To those of you that do not get this rose I can't wait to see you all back at the mansion and you know....Try harder".

Exactly! These are the things that made me laugh. Yes, she was awkward, but she had some fun moments. There will still probably be those cringe worthy moments, but I'm hoping we see more of that fun side of her and that in turn, brings out the fun side of the guys. Done right, we could have a really fun, relatable bette.

I don't know, but I find her really likeable. I always believed her over Caelynn. To me she always seemed to be herself...warts and all, while Caelynn was always trying to be perfect and seemed to be auditioning. I hope she continues being herself and they don't mess with her too much.