Love your posts @Sprite and I also agree with your comments about Melissa. I remember Jason was seen on a balcony in what is to this day one the most wrenching crying scene we ever saw from a guy, as a lead letting go of his F2. And he did express that in front of Melissa right there at the AFTR. That’s kind of unforgettable . People crucified him for it...
I agree about Hannah and her immaturity or at least lack of relationship experience. I don’t judge her, but trying to understand where it comes from . She seems to come from a very tight Christian family and was in her own words always a little ‘ out of the norm’ very outspoken, spunky and into acting from a young age. I believe her pageantry was a way to express herself within the confines of what was probably a sheltered life in a small town. I think she learned a lot and certainly seemed to have thrived but in a way it was her escape from the limitations of her environment. Traveling and competing with others from other areas and even states. She probably didn’t have a very conventional teenage years where the discipline and duty required for the pageantry came before her exploration and affirmation of independence.  She did really well in her studies, a fact that many underestimate in looking at a Miss Alabama. That is in my eyes another connecting factor with Tyler, by the way, as he is this guy that on the surface looks a certain way, superficial, cocky, but really has many layers and has a heart of gold, as does Hannah.
All I’m trying to point out is that I think she didn’t really complete that rebellious phase that leads to true independence as we learn to detach from our parents and form our own identity. Maybe I’m off, but she mentioned something in an interview that struck me, and that is that her need to perform and present a perfect facade started to break down only very recently, probably with the help of the therapy she did, after she didn’t win a title and began realizing that it was in a lot of ways ‘fake’ and she wanted to be ‘ real’.  That same need has been at the center of her journey as she is not totally free from the grip of her image and beliefs especially in such a tight controlled environment that is the BACH bubble. So she has made decisions and got a little too
soft sometimes on her tolerance, while at other times, her confidence won over and guided her correctly.
She has done really well in many ways, and in others was only reacting, not so well, to the many pressures and restrictions that were put in front of her.
I have confidence that she will blossom with the right amount of self care, some distance from this artificial world, the right support and love from closed one as she see fit. Maybe and hopefully Tyler is part of that loving environment.
JMO

@GuardianAngel wrote:The good thing is if there is a switch, Hannah and Tyler will not have to worry about the backlash those other two and Colton to some extent had to endure for going after who they wanted. Jason and Molly had to pretty much go into hiding, Arie didn't give a crap.

IMHO if there is a switch I hope they don't get engaged right away. I find her very immature. She needs to date, for a long time before thinking of getting engaged IMHO.

That was the point I was trying to make about Hannah needing to take some time for herself..She's now been engaged 3 times (if she and Jed got engaged) That to me shows she isn't ready for marriage. If people didn't like Tyler she would be hung out to dry again just as she was when it came out she didn't pick him and people were calling her all sorts of names. Which they're allowed to as their opinion. It still hurt to see a 24 year old (child really) be torn to bits like that, I stand by me saying she needs some time and try to work out why she keeps picking the wrong person. It's her life tho and I will stand by whatever she chooses to do.

As for Jason and RE neither had been engaged 2 times,make that 3 times and them only 24 .It's simple if you think about it.

Wait, since when has Hannah been engaged twice before?

Hannah has never been engaged (prior to Jed). The show edited that conversation weirdly or she phrased it poorly. She had the same conversation with Nick Viall on his podcast, she said she’s been in 2 prior relationships where she thought those relationships would end in marriage. Both times the relationship was serious enough where they talked about getting engaged, basically planning their life together.

I definitely interpreted that conversation differently.
IMO she meant two serious relationships where a marriage down the line was a realistic goal.

I definitely interpreted that conversation differently.
IMO she meant two serious relationships where a marriage down the line was a realistic goal.


Why did she say she had been engaged 2 times then? I was just taking her at her word.....

She never said she was engaged twice earlier at all. Only with Jed. It has been repeatedly said on this forum so many times it's morphed into a fact !

She said on Vail Files that she is the sort of person who "always dates for marriage" which means she isn't the type to date casually and only gets into relationships if she can see a future with someone. Her prior relationships ended both because one was ready to propose but she wasn't over her ex and in the process of getting back with her ex she managed to loose both the relationships as the ex she went back to turned out to flake on her. On the show during her sit down with CH in Riga, she said something like "I have been damaged before. " No mention of an engagement !?!

So no broken engagements before Mr. Fake Wyatt. The Vail Files podcast is too long to point out where she spoke about it but she expecitly says they were boyfriend's she never referred to them as fiance's. 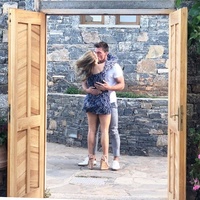 Sharnee wrote:snipped
Didn’t Jason’s first interview show him happy and shortly thereafter you could sense a change that something happened? Ita, not an Arie comparison . Hyler if it happens,  is more like a Mesnick . Imo

Yes - IIRC that interview was very shortly after Thanksgiving and he spilled the beans and said he was happy and engaged. IIRC the wheels fell off between then and Christmas of that year.

@LaineyG wrote:^^^^good points but the only correction I want to make (and just my opinion)  but Jason did not go back to Molly because he couldn’t stop thinking of her.  He went back because Melissa went back to her boyfriend now husband Ty.  Molly was being considered for the bachelorette.  Jason stepped in and asked for another chance.  Molly still had feelings and took him back.  It all worked out for the best of course.

It's sad (to me) that Jason got crucified for what he did, but IMO the story was told the way Melissa wanted it to be told. IMO there is already too much out there for Jed to take any sort of control of the narrative.

Regarding Hannah’s previous “engagements” I feel like some of us watched a different version of last weeks show where Hannah clearly stated that she had been engaged twice before. Lol! Now, however that’s interpreted or what her real intentions were meant to be with that statement, it sounds like she really hadn’t been engaged but just in long term serious relationships. Maybe tptb edited that conversation to make it appear to be what Hannah said. I just know it’s what I heard and am glad to know it’s not true. IMO

They adress the question about the "engagements" on this podcast and the host says that she interviewed Hannah and talked about it. Hannah told her that she was in two serious relationships that were on the pat to engagement but didn't get there, so the host says Hannah was not engaged twice.
It is towards the beginning while they were talking about Garret's date.
https://mobile.twitter.com/ClaireEFallon/status/1143649881514487816

@Minney wrote:Regarding Hannah’s previous “engagements” I feel like some of us watched a different version of last weeks show where Hannah clearly stated that she had been engaged twice before. Lol! Now, however that’s interpreted or what her real intentions were meant to be with that statement, it sounds like she really hadn’t been engaged but just in long term serious relationships. Maybe tptb edited that conversation to make it appear to be what Hannah said. I just know it’s what I heard and am glad to know it’s not true. IMO

Me too. She said it during her conversation with Peter.

I posted somewhere around here it sounded like a splice and dice, but now I'm wondering why did they do that?

Um, what?! We thought we knew everything about Hannah Brown, but apparently there are some closely guarded secrets fans have not yet been privy to … until now! On last night’s episode of The Bachelorette, the reality star dropped a shocking bombshell regarding her past relationships.
As we’ve seen on this season of the ABC show, finding Mr. Right has certainly been no easy task, but apparently making guys fall in love with with her is Hannah’s specialty. The reality star revealed that she was previously engaged not once, but twice before being on the dating show.