First date! The Bachelorette star Angie Kent holds hands with handsome brunette suitor as the pair strut across a field of greenery and enjoy a romantic boat ride

Filming for the fifth season of The Bachelorette is well under way.

And on Monday, Angie Kent was spotted holding hands with a handsome brunette suitor during what's believed to be her first date on the show.

The former Gogglebox star, 29, was spotted strutting down a field of greenery in Kurrajong, in New South Wales' Blue Mountains, during the romantic outing.

Flashing a wide grin, the blonde beauty appeared to engage in an amusing conversation with the good looking hunk in pictures taken on Monday, June 24.

At one point, the suitor held onto Angie's shoulders as she made her way through the woods.

They then reached a wooden row boat where they enjoyed a tranquil ride along the tropical lake.

The mystery man showed off his strength by rowing the boat as he spoke to Angie on the water.

After their time on the lake, Angie and the unknown suitor glamped in an open tent where they were surrounded by romantic lantern lights.

They appeared to enjoy a glass of wine as they chatted the night away. 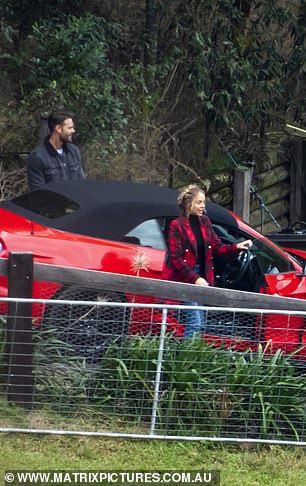 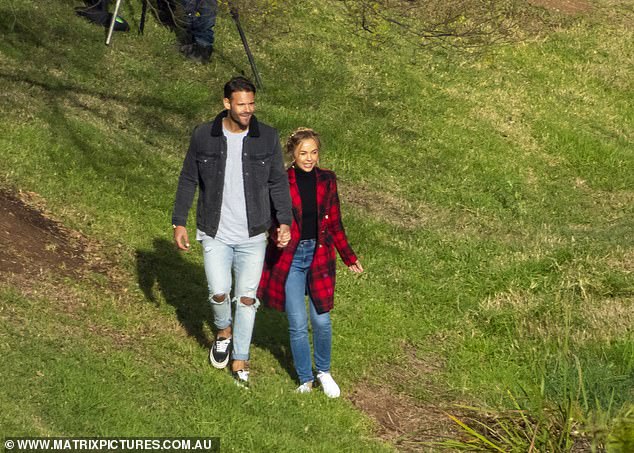 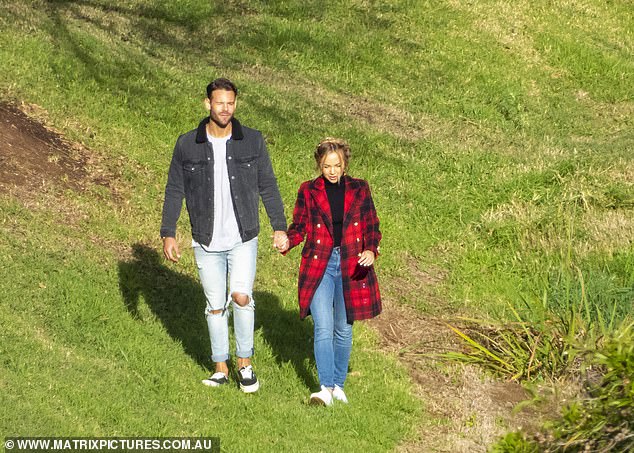 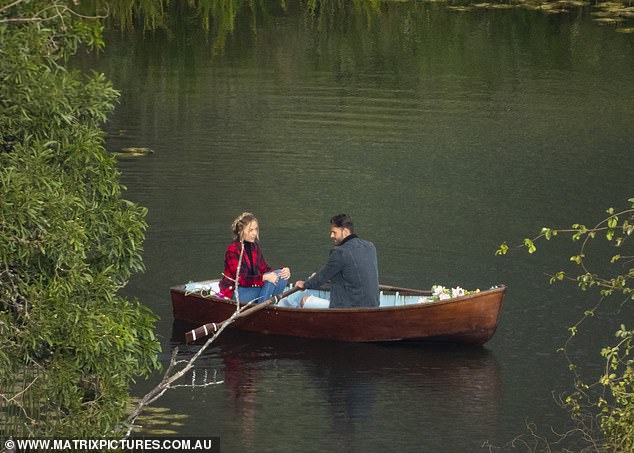 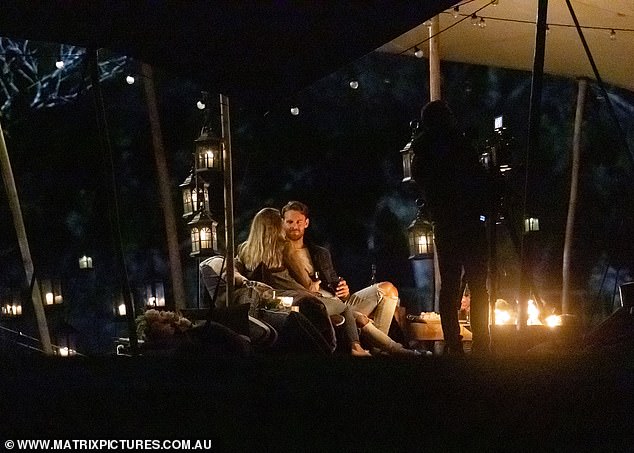 Much quicker turn around on the pap shots for Angies season so far? We didn't get Matts first date shots until a lot longer after the date if I remember correctly?

@Dirty Street Pie wrote:Much quicker turn around on the pap shots for Angies season so far? We didn't get Matts first date shots until a lot longer after the date if I remember correctly?

And Matt's first date was only reported by the Daily Telegraph behind a paywall - nothing on DM or nowtolove or any of the other websites - and the pics of that date still aren't available on any of the pap sites (matrix etc) which is weird IMO.

Let's hope we're going to get more to work with for Angie's season.

This guy looks like classic first date material IMO - traditionally good looking, probably an all round decent guy, but if the AU first date curse holds up he'll be lucky to make it further than Top 4 IMO.  Reminds me a lot of Rob from last season.

OK we are in business!  Still haven't got all pics from night 1 but Diimex has just listed all the pics from the above group date - going to try to separate the guys out now....  @Dirty Street Pie are you still around?  Or anyone else wanna help sort some fellas?

I am confused.  Is this a contestant?  Angie has a quirky bunch

Sadly, I believe he is crew.  Osher doesn't have private chats with just anyone.

Not sure whether grey jumper guy is also Blue suit/BMX guy.  What do you reckon? 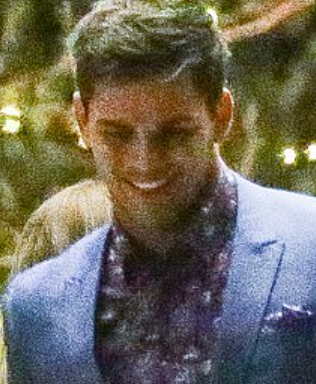 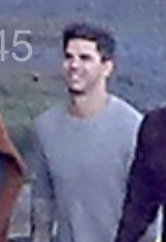 Sadly, I believe he is crew.  Osher doesn't have private chats with just anyone.

Not sure whether grey jumper guy is also Blue suit/BMX guy.  What do you reckon?

I think it might be. I thought I saw tatts on his hand in the first night pics and I think there are tatts on his forearms in a pic with the grey jumper pushed up.

Yeah I think so too - I'll add them to his thread and can always split into a new one if it's a different guy.  Thanks @Agent99

ETA:  OK I think I've got them all sorted now.  Let me know if anyone spots any errors/doubles.  15 guys total so far - probably only 2-3 more at the most IMO.

I can't see Grey Jacket Man on the group date - wonder if he'll get the second single?

IMO that guy is a reporter or works for a magazine?..  I remember his interview with Matty J in a hotel room on the bed during Mattys season

Looking back through the contestant threads and wondering if I've got some doubles.  Thinking these might be the same guy? 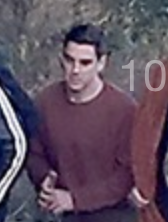 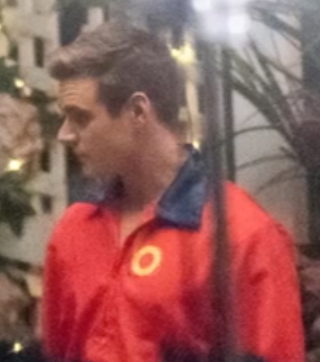 Can anyone match this guy to the current threads? 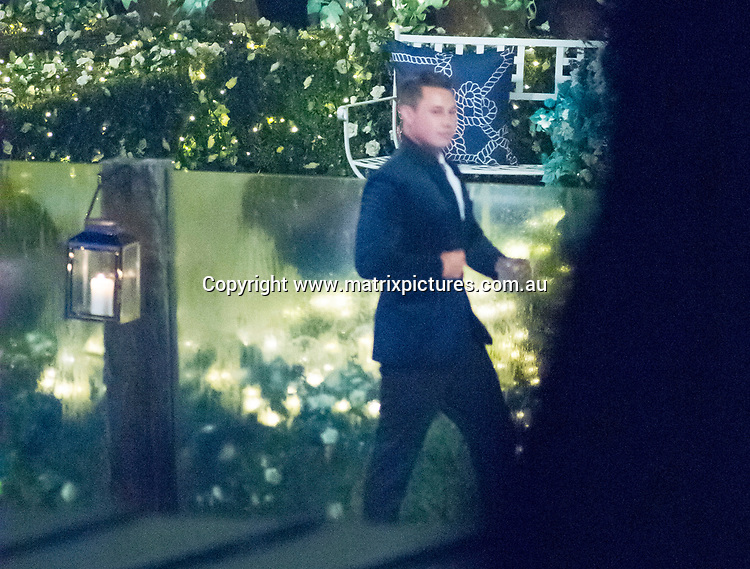 Make of this what you will...

A very important investigation into why The Bachelor's American Alex is back in Australia.

If you need your memory refreshed, we’re talking about the most underrated Bachelor in Paradise contestant in the history of the franchise, Alex Bordyukov, who has one of those faces that make you feel as though you might spontaneously forget how to speak and maybe breathe if you look directly into his eyes. For some reason he didn’t have an orderly line of female contestants vying for his attention in Fiji which remains the greatest mystery of our time.

Instead, much to our shock, horror and deep disappointment, the women seemed more interested in the likes of Bill, Nathan and Paddy.

Firstly; no, and secondly; why?

But that was then and this is now. Months on from the last aired episode of Bachelor in Paradise, while completing our weekly “American Alex Instagram stalk”, we learnt that he is back. 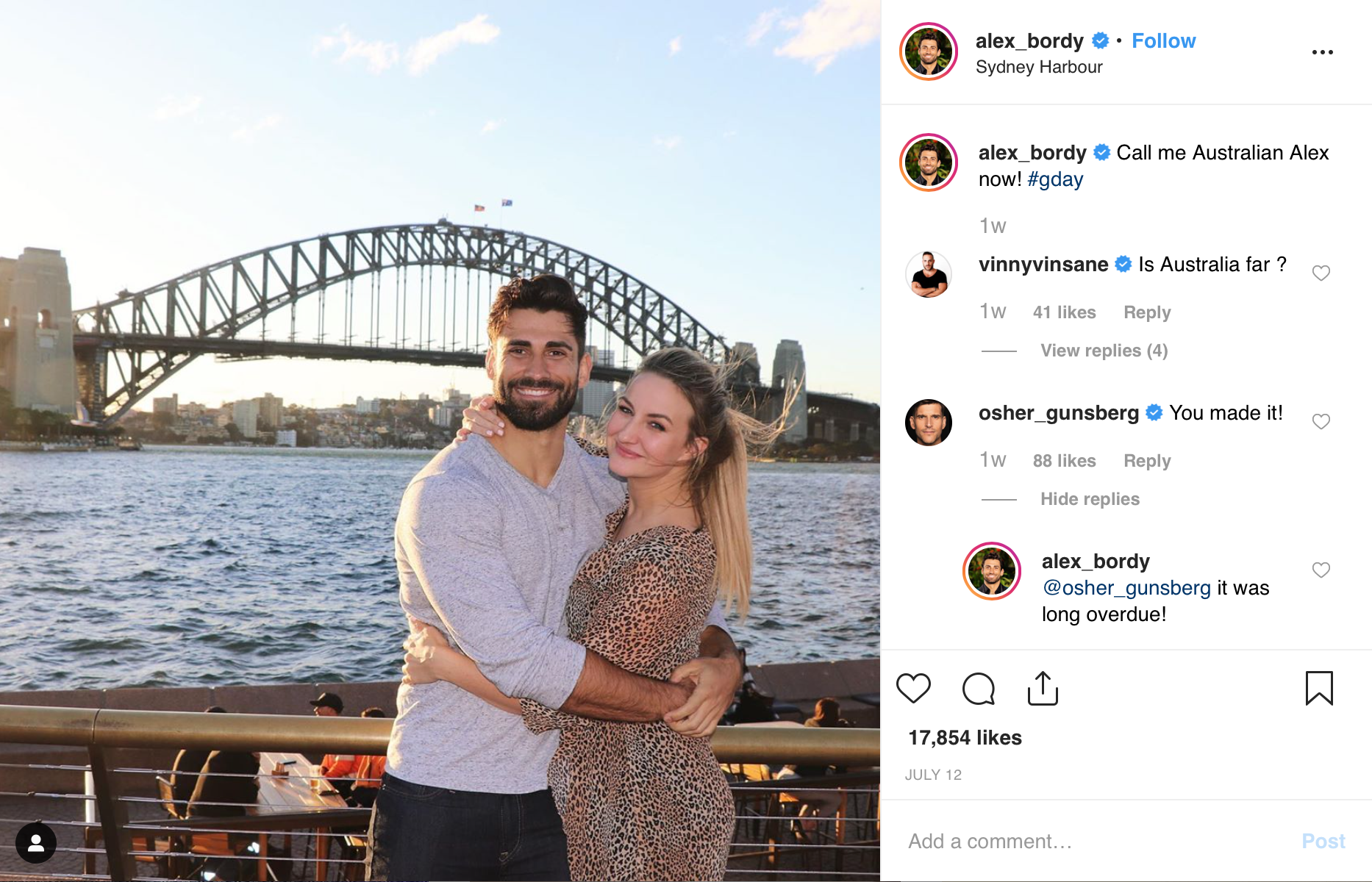 But ex Bachelor in Paradise contestants simply do not just come back to Australia for no reason at all.

It’s just not a thing.

Which brings us to our very thoroughly researched theories.

Why would he come to Australia in winter??? This is clearly not the reason at all.

2. He’s come to pursue one of his former Bach in Paradise flames

After lurking through the comments on his Sydney and Melbourne tourist pics in which he’s giving off very “hot dad on holiday” vibes (so many wholesome nature walks), it is apparent he is not linked to any former BIP cast members.

Now. Alisha and Alex didn’t seem to have a romantic spark on the show, but they popped up on our feeds in a very couple-y looking photo last week. Their bodies are… intertwined in said photograph.

However, Alisha was quick to shutdown the inevitable rumours:

Unlike his photo with Alisha in which they seem to be embracing very tightly, he's standing about 30 centre metres away from Zoe in their park snap. We're no body language experts, but this gives off mega friend vibes to us.

He is not here to explore a connection with Zoe.

After leaving Fiji with fellow American Caroline, we already know things ended soon after their return home. She also posted this comment on one of his tourist snaps (which - given they have remained friends - we assume is a joke):

While none of his recent activity 100 per cent confirms he is in fact single, this third and final theory is our strongest yet. Honestly, we are prouder of this than our Year 12 results;

3. He's here to join the cast of The Bachelorette

We know Angie Kent's season of The Bachelorette has just started filming, so the timing is perfect.

"Well sorted" roughly translates to "You have been assigned a room in The Bachelorette mansion and we have received your request for top bunk".

We think Angie and American Alex would make an excellent couple, so we truly hope this theory rings true.

Plus... we wouldn't mind seeing him on our screens again.

Doesn't seem likely to me but if he suddenly drops off the radar maybe there's something in it.