The last US ette season, they had a friend of the 'ette who was "apparently" given information that one of the contestants had a g/f back home. During night one, they set up a command centre outside the mansion

watching through TV screens analyzing each guy. When the friend spotted the contestant, she told the ette who in turn confronted him.

I think there was a twin in the past, I vaguely remember from another season trying to trick the lead.

Brad will be going by the name Mark in the mansion

Angie Kent's season of The Bachelorette will feature a shocking twist, with Angie's brother Brad entering the first cocktail party disguised as a suitor.

And talking to The Daily Telegraph on Saturday, Brad said that by infiltrating the show, he was able to figure out who was really there for his sister.

'I could see who was genuine and who was not,' Brad told the publication.

He added: 'I was looking out for how the boys spoke about Angie.'

During the first cocktail party, Brad will enter the show posing as a suitor, while reporting back to his famous sister on what the contestants are really like.

'I want you to go in there and give me any sort of insight on who would suit me,' Angie, 29, tells Brad in a trailer released on Thursday.

Angie later tells producers that Brad is 'really protective' of her.

Brad then explains his mission, saying: 'I'm going into the mansion undercover. [Angie] deserves someone special. The boys better watch out what they say to me'.

After arriving at the first cocktail party, he adopts the alias 'Mark'.

Angie told TV Week that having her brother around made her feel more comfortable.

'To have him there on one of the most nerve-wracking nights of my entire life just put me at ease,' she said.

'I knew he wouldn't go in there and just be like, "That guy is a d**khead." He'd focus on the positives, and that's what I wanted.'

When Brad isn't undercover on The Bachelorette, he works as a personal trainer at 12RND Fitness in Mooloolaba on the Sunshine Coast.

He documents his fitness journey on Instagram, where he has 930 followers.

Angie's season of The Bachelorette does not yet have a confirmed air date, but is expected to begin in the coming weeks.

Oh and LOOK which contestant is the ONLY one pictured meeting Angie in the article.

My spidey sense is definitely tingling about this guy (Glenn? - need to confirm names ASAP...). 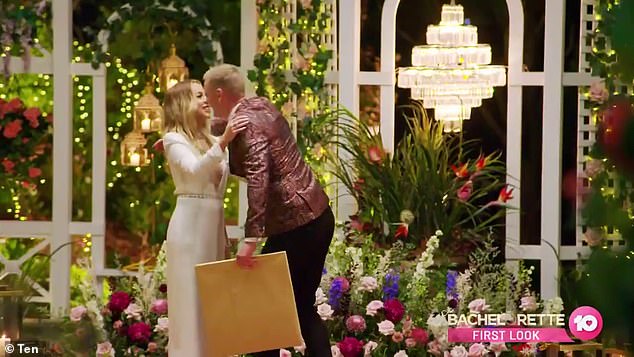