His brother's IG has them in Bali for their birthday of July 20.  Could also be old photos, but have a feeling they aren't and he was home by that time.

I'm guessing FRC was before Wolfie's birth on Aug 23, so HTDs could have been 2 weeks prior?  I'd think being back home by Aug 11 puts him out of the 4.

Do you remember when it was the betting odds shifted to blonde?  I might bring over all Glenn-related discussion from the betting thread, to keep it all together.

@Bobette wrote:I'm guessing FRC was before Wolfie's birth on Aug 23, so HTDs could have been 2 weeks prior?  I'd think being back home by Aug 11 puts him out of the 4.

Do you remember when it was the betting odds shifted to blonde?  I might bring over all Glenn-related discussion from the betting thread, to keep it all together.

Yeah that's what I thought too.  Forgot to bring the posts over so will do it now.  I really think something is up here.

OK so odds indicated a blonde to win since I first checked mid-August and stayed that way through most of September...

@Sundy wrote:Hi all. Just checked Sportsbet. It’s all evens. No max bets bring them all into line. Are we assuming it will still be a blond 31-34 year old?

@Sundy wrote:
Blonde is definitely the biggest clue for me - it shifted from brunette to blonde before the FRC and hasn't changed since.

And there are only limited blondes.  I'm hoping we might get some bios tweeted this weekend and maybe a full cast list Monday.

Who are the blondes? I want to go check them out

Metallic Jacket - Glenn (?) - blonde, state unknown - not sure if that's the right name but he's the one I've got my eye on - looks to be 31-34 bracket and he's in the first promo meeting Angie but not the second one with the "bad boys" - pics from night 1 leaked to media - if he's funny and from NSW he'd be my early pick for F1.

So that leaves us with Glenn.  He's blonde, and looks like he could be around the right age.  If he's from NSW he could be F1 IMO, but he would also need to be funny, since that's something Angie has said she is looking for.  Would a guy who installs air con for a living have a sparkling witty repertoire?  It's possible, IMO.

Another thing with Glenn - which could be a pro or a con - is that his meeting with Angie was one of the few pics we got from night 1.  With Matt's season, neither Abbie nor Chelsea were shown meeting Matt - everyone else was.  So with Angie perhaps they are doing the opposite - showing her F1 but hiding the others?

I reckon a tradie could totally be witty! One of the funniest guys I know started a degree in performing arts, he was so gifted as a performer. But he quit after a  year and got an apprenticeship because he knew the big money in being a tradie.  Smart as well as talented

...until the 26th September - just after the show had been abruptly postponed - when it suddenly shifted to brunette. 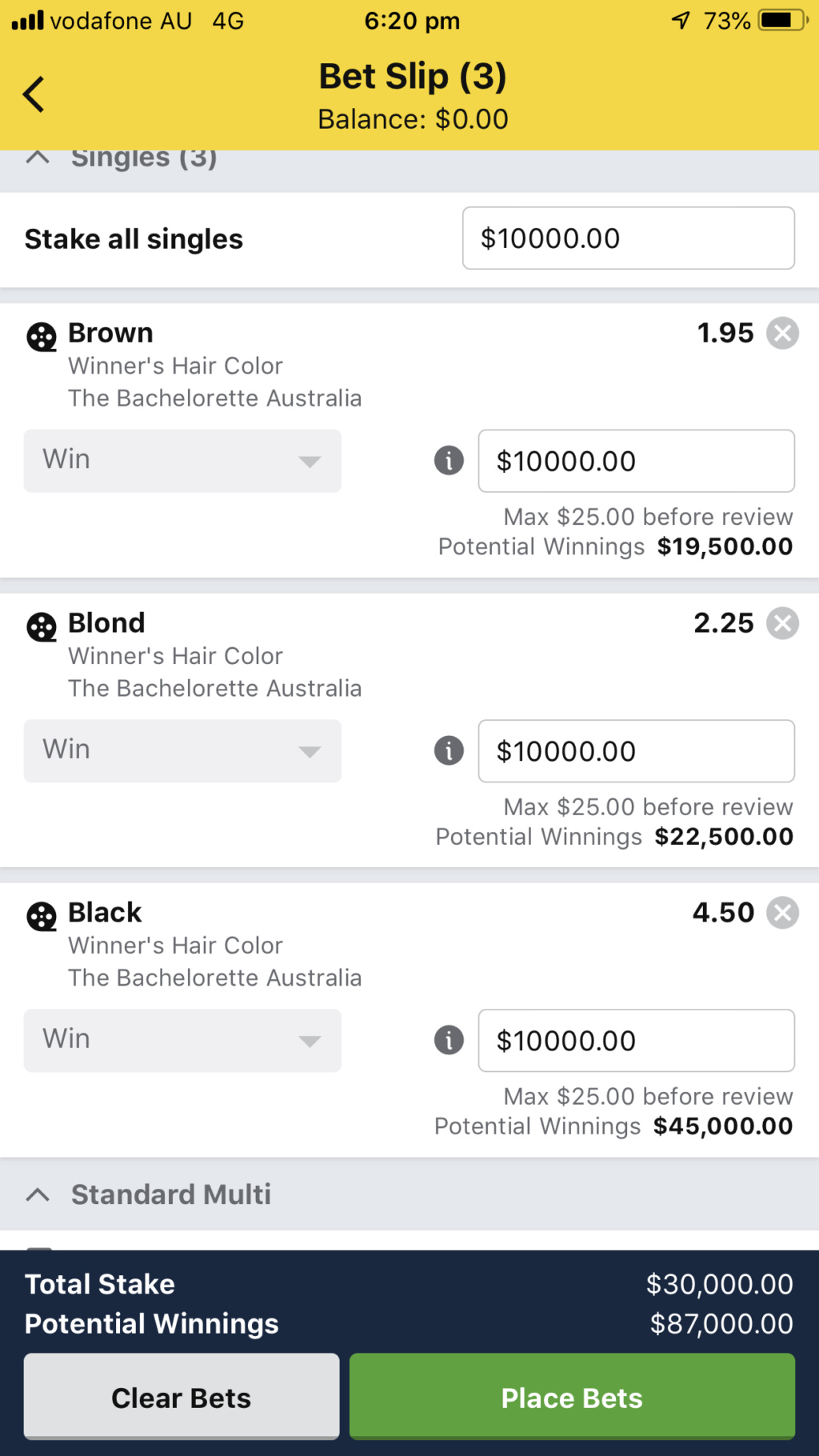 And then today we get TAB and Sportsbet both spoiling Carlin, but Sportsbet also having Glenn right at the top of the table.

@Bobette wrote:@Sundy are Sportsbet trolling us having Glenn second on the table?

Or are we on the right track suggesting he may have been Angie's first choice...

@Sundy wrote:... snipped This is 100% nuts. With current max bets on Sportsbet Glenn is now favourite to win 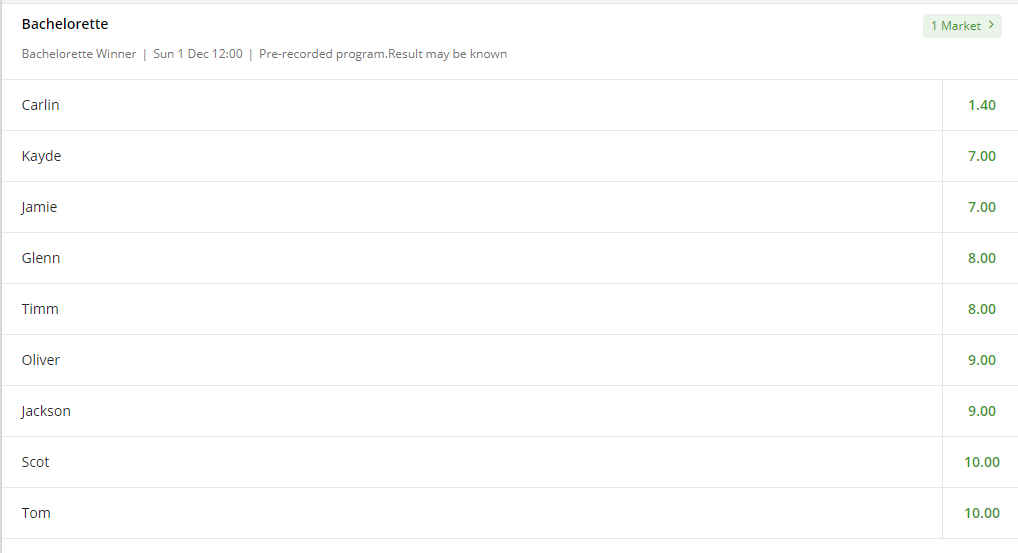 Also just noting that Sportsbet are known for putting the person second who looks like an early front runner, regardless of where they finish up (e.g. Lisa from Matty's season) so them having Glenn that high up makes me even MORE suspicious he was an early favourite, and that they are expecting people to to backing him as F1 after episode 1.  TAB rankings seem to go more on end placement order, and are a better indication of where people will end up, IMO.

@mercieme wrote:If Glenn was home by July 20th as was sleuthed in his thread and per filming thread that FRC was sometime the week of Aug 12th, then it means Glenn didn’t even make it to HTD. Not sure how to interpret the Sportsbet odds for Glenn based on this.

He may have been an early favourite of Angie's, who later self-eliminated, leaving her to find a replacement F1.  If he gets the second or third date on episode 3 or 4, I will be highly suspicious.  I'm waiting to see how they interact, but it's a possibility, IMO.

I'm not understanding the Glenn/Sportsbet conspiracy at all. If he was home (and then in Bali) by 20 July, he most likely didn't even get a single date.

@Agent99 wrote:I'm not understanding the Glenn/Sportsbet conspiracy at all.  If he was home (and then in Bali) by 20 July, he most likely didn't even get a single date.

The bold is key to whether the conspiracy has legs or not.  If he doesn't get a date, fair enough, he's MoT and just a nice looking chap from Perth.  But, if he gets the 2nd or 3rd SD (traditionally the F1 date) and then self eliminates, that IMO would suggest to me that he was an early favourite and him leaving messed things up.

Also relevant IMO is where Sportsbet are getting their info from now that they're not buddies with TPTB.  If it's someone a few steps removed, they might have just heard that "the blonde guy's her favourite" early on, and not gotten any updated info till later.  Whether Glenn's involved or not, something's off with this season IMO.

I think we'll know from episode 1 how keen Angie was on Glenn.  If she's "meh" and he's MoT then so be it.

@Bobette Sportsbet had a blonde from Qld or NSW, not WA, so I don't understand how Glenn is even in the equation. I'm putting this right next to the black hair from Qld misdirect in Matt's season and paying no credence to it.

Yeah that's why I said IMO it depends where Sportsbet are getting their info - if it's based on pap pictures for example, you can tell someone's hair colour and guess their age pretty easily.  Home state?  Not so much. They may have just guessed QLD and NSW because statistically, most contestants are usually from NSW and Angie's home state is QLD, so they would be most likely.

Sportsbet now back to Carlin being favourite. I give up and say Carlin’s won it and there is something fishy or SB no longer have inside info. Were they right with Chelsie before we
Knew it was Chelsie. Like was Victoria favourite?

@Sundy wrote:Sportsbet now back to Carlin being favourite. I give up and say Carlin’s won it and there is something fishy or SB no longer have inside info. Were they right with Chelsie before we
Knew it was Chelsie. Like was Victoria favourite?

Yep - Hair/State/Age all correct.  Upon reflection IMO Sportsbet probably spoiled Matt's outcome so aggressively because they knew TPTB had dumped them and were pissy.

They've been suspiciously quiet this season, odds swapping back and forth.  They're out of the loop IMO, and will probably be relying on paps from now on rather than producers.

I agree Carlin is beyond doubt IMO but I am far from convinced he is a genuine F1 so will be watching throughout the season for signs she was actually keen on someone else.

I think TAB is the only reliable betting source now and Glenn is just a nice looking chap.