That’s a very atypical type of first date. Methinks this season may be a bit different from that alone. Never has a first single date on bette won so this will be a first. Plus the first date is far more intimate than the usual fear factor style date that Bette AU usually does (Dave. Jake. Jarrod. Etc). I’m inclined to think if Carlin is F1 then she likely had him as her front runner early on and wanted to get to it ASAP

Angie confirmed in an interview last week that Leads don't get any say in who goes on which dates or what they do, so if she did have him as an early favourite I still think TPTB would have shifted his date to second or third.

TAB have Kayde placing third, and he's the only contestant with no IG listed on official sites, and still on private.  If Kayde gets the second or third date I'll suspect Kayde was her first choice and Carlin was originally intended for F3.

Given her love of the genre, the question has to be asked: has she ever watched UnReal? Yes!” She laughs again. “We’re not that extreme in Australia but there are similarities. I mean, it’s set up. It’s not like I get to organise my own dates.”

Sounds more like what has always been known that the lead doesn’t organize the dates or plan them or anything. Only who they want to go on a date with (if F1, villains and MOT 2on1s are producer driven imo). I know with the dates that the lead can choose which planned activity they want to go on with which contestant. If it applies to someone me who is MOT or a villain sure it’s likely producers but  F1? That’s on the lead imo.

Carlin’s night one outfit fits the pattern of all previous Bette F1s being dressed to match well with the lead and more dressy than the others (never in flamboyant clothes or light suits or prints etc).. There’s never been a F1 who wasn’t dressed in one of the nicer outfits on the Bette. Makes me think the stylists plan accordingly and makes me wonder if they see pics of the cast before.

I can’t say I am surprised at all by Carlin being F1 though. I definitely could see her picking someone like him.

See that's the thing, having watched Angie watching Bach and Bette on Gogglebox (

) Carlin seems like the kind of guy she and Yvie would have rolled their eyes at and called out for being douchey IMO.  He is the opposite of the type of guy I would have expected her to choose.

But I could definitely see the producers liking him - he's classically good looking, he's an actor so would know how to take direction, and he's already done a tonne of shilling so doesn't mind selling out for a gig, IMO.  So IMO he was always flagged for Top 4, but I don't think he's Angie's type at all.

Anyway I'm keen to see how they interact, whether he makes her laugh, and whether he mentions acting...

that makes me think even more he’s the type she’d go for. Easy to sit on a couch and judge and make fun. Then she’s there and he’s being like Prince Charming wooing her and comforting her (per BTS pics) and voila the love she’s never dreamed of before but now has (we’ll not really but you get the drift)

I hope it works out. If not then maybe the same formula here that Sophie had with Stu. Angie gives them ratings. Carlin acts and gives them a tv ending. They do their time together and part ways. All’s well that ends well

Speaking of Prince Charming, there’s a video posted by BetteAU calling Carlin Prince Charming and Angie is all swooning how hot he is hot diggity damn etc. Yep

she’s definitely into him.

Why would they do that if he's F1? they usually keep F1 hidden(ish).  This season is all kinds of weird.

I thought their meeting looked lack-lustre from what we've seen.  Zero witty banter - her meeting with Ciarran seemed much better to me.

Also those sound bytes of her saying he's hot etc could have been shot later to fit the story.  Like maybe even during the 2 week premiere delay...

ETA:  Posting screencaps to illustrate my point.  Hair, lipstick and brows all different IMO.  Those hot diggity damns were not filmed night 1, IMO. 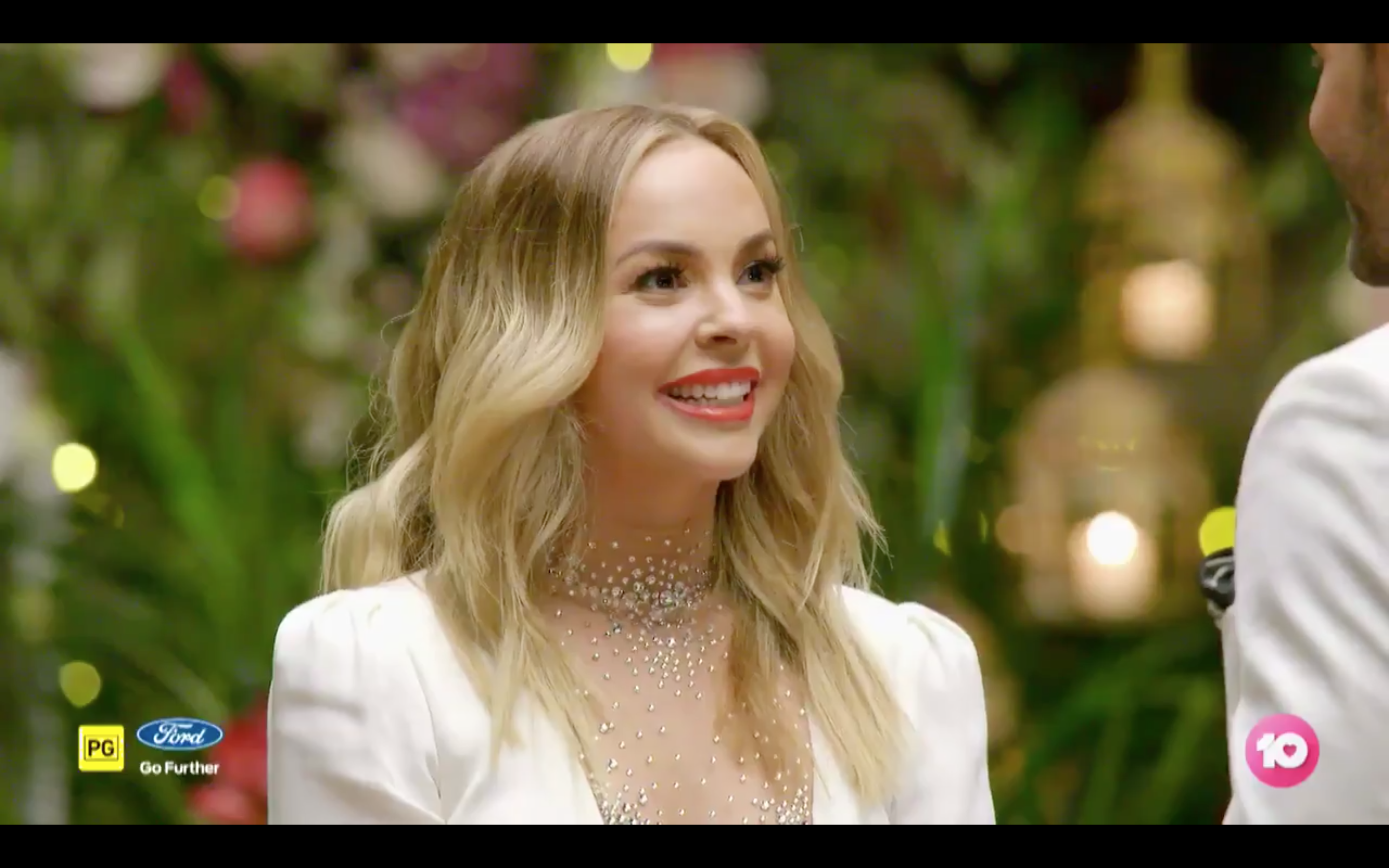 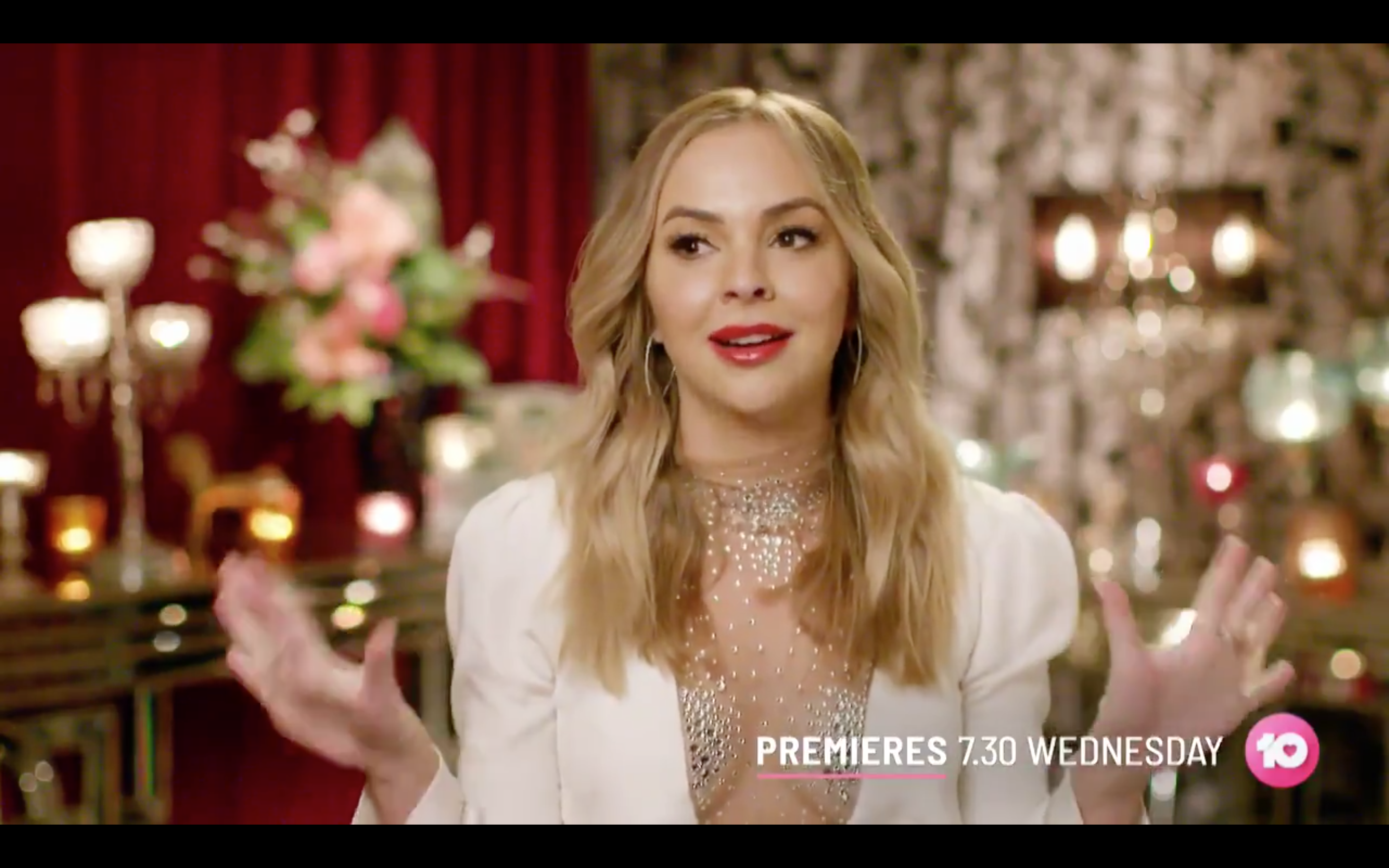 @Bobette wrote:Next up we have Carlin.  "Hi I'm Carlin and I'm a FITNESS TRAINER."  Don't believe anything you may hear about me being an actor and model.  Oh no siree, I am a fitness trainer and here's some sparkly subtitles to prove it.  Just don't Google me, K? 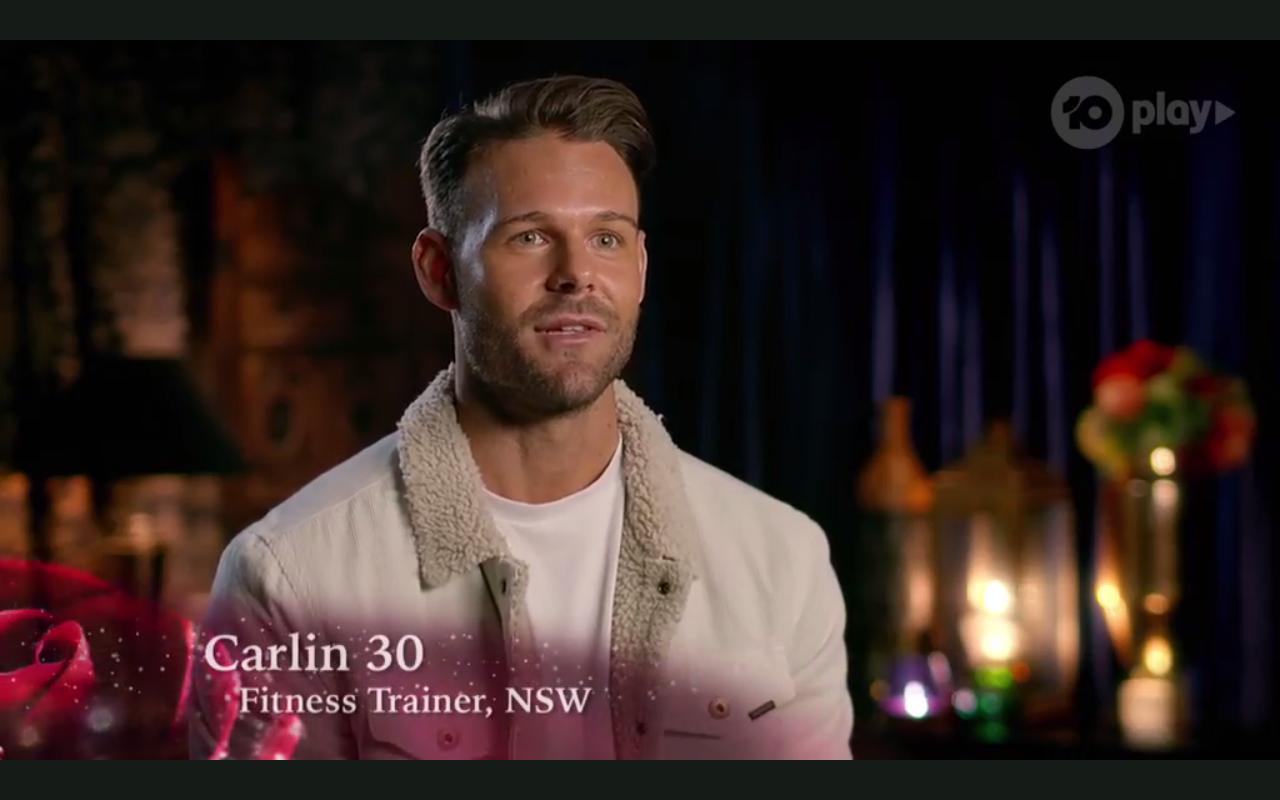 I am also 30 and have a BEARD so get ready to pay up, Sportsbet.

They exchange pleasantries.  She drops the hot diggity damns and he says she takes his breath away though TBH I think that's probably just the pneumonia kicking in.  And then he's off.  She says he's "nice" and maybe it's time she tried a "nice boy".  Meh.

@Dirty Street Pie wrote:Could be that he’s an actor, which gives me shades of Jed.

The other thing that I’ve heard about him, and don’t know if it’s been mentioned on here is that he’s been married before, and quite religious, and involved in Hillsong, which for our non Aussies is a big evangelical church. So he could possibly be saving himself for his next marriage?

@Dirty Street Pie no none of that has been mentioned here IIRC.  The bold especially definitely does NOT seem to me like something Angie would be down with.

I am also getting overwhelming Jed vibes from Carlin and he is not sitting well with me so far at all.  The smarmy stubble, pulling out his guitar at the first opportunity, even the darn fleece-collared jackets!

There is no way they will stay together after the show IMO and I stand by my original theory that he was not intended to be F1 and got subbed in later, for the optics.

@Bobette AAAAARGH! This is giving me PTSD  all over again!

@Astrobach wrote:@Bobette AAAAARGH! This is giving me PTSD  all over again!

i agree please don't bring Hed anywhere near Bach AU ! PLSSSS for the love of god i am still not over denial den

@Astrobach wrote:@Bobette AAAAARGH! This is giving me PTSD  all over again!

Reading through the comments on the show's IG page is interesting too.  Many non-spoiled viewers are saying he's this season's Elly, he's peaking too early, he'll be the one who goes home at F3, etc.

It almost seems to me that the show were setting him up to be their very own AU Jed - definitely NOT someone you would want to align a contestant with if you were expecting them to be F1, IMO!

And TPTB would never have given him the first date - an overnight date no less - if they thought he would be F1, IMO.  Something went very wrong with TPTBs plan for this season, I'm sure of it.