@HEA wrote:What I find extremely interesting is the timing those girls are coming out... one mid-season and the other one at almost the finale...

both knew before the premiere they were going obviously...

so why not coming out BEFORE the premiere when abc made a big deal to give us the list of the participants so IF they had exes and dirty laundry to share, they could do it at that time

THIS confirms exactly what was already discussed: prods wanted the script being: faith and cheat. They kept the juicy ones for their season

@Julie81 wrote:I don’t think for a minute Tyler was number 3 or number 4. Peter was purely physical and I just can’t even put into words what Luke was to her. I think he had a weird hold on her, but I don’t know how to categorize him on the number scale.

IMHO If Luke had turned out to be a decent guy he would have been Hannah's F1 and we would have had a totally different show,

But he is or I should say was not a decent guy on the show so....it was not meant to be.  That’s like saying if Bentley has stayed then Ashley would never have picked JP or if Brooks had stayed then Des would have never picked Chris. The list goes on and on

https://people.com/tv/bachelorette-hannah-brown-still-recovering-season-15-premiere/
By Matt McNulty May 16, 2019 02:12 PM

she does not look very depressed or down or whatever IMO... 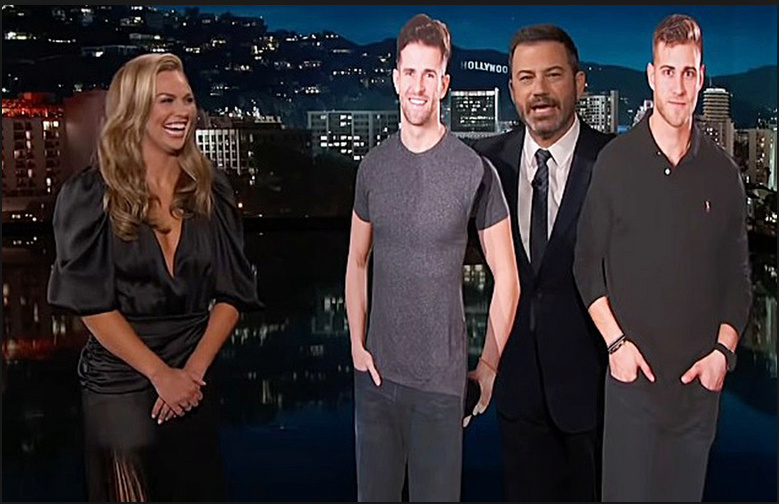 I can share a couple of pictures where she looks very much in love. that was of course before Haley/RS/People.

I believe this is from an interview at the MTA. So media is starting to post clips. Lauren Zima made an IG story of Chris Harrison talking about the Windmill and Jesus still loves me line from MTA as well.

Not sure I’ve fully prepared you #BachekorNation for what’s about to happen tonight thru the finale. I need you in full #TheBachelorette lockdown til this blows over

peter's ex scandal is only minimally better than jed's imo. both men appeared to the women to be in serious relationships where i love yous were exchanged. in fact peter was begging her to move in while he applied for the show. at least jed had already appiled by the time he met hayley. both women were shocked that they were dumped - one by text, the other by ghosting. both men cheated on though their girlfriends believed them to be in an exclusive relationship. both families were apparently surprised by their newfound love for hannah except that peter's family didn't let on about their discomfort.

jed is only marginally worse because he conspired with the girlfriend before the show while peter had no co-conspirator. had peter won, he would not have even told hannah about the ex because in his mind he broke up with her. and once his girlfriend released her story, people would be saying he lied to hannah, he stole her season etc etc. jed and peter are the 98% the same in terms of being guilty.

the show needs to screen out these guys better but that would reduce the contestant pool too dramatically since so many guys are in a friends with benefit relationship where the girl is not on the same page. maybe they should offer small cash prizes to girlfriends before filming starts. all jmo.

@ilovecarbs IA but I also seem to think that's exactly what they are looking for.

Bringing this over from the locked thread.

@BlueTone wrote:
Maybe it's time for women to start being smarter about men. My dad sat me down when I was 12 and told me that guys will say anything, do anything, lie convincingly with big ole tears in their eyes to get in your pants. So we need to woman up and realize we have a responsibility in this to not be stupid and naive and gullible.

eta: if you want him in your pants, then great, go for it, but don't play the role of victim afterward. all imo.

I love this, and thanks for sharing.

For a different perspective from a mother who never had any daughter's, only a son. When he was in his teens, my advice was do whatever you want with it in your pants. Once you get a girl involved, remember, they are always right. So even if you're right, she's right, not you.

Kendal deleted this tweet on the Peter scandal. But someone from reddit got a shot of it before that. Here is a picture.

what did i wake up to?! Bill is windmill guy? Jed is thanking Peter for taking some heat of him? and Tyler and Hannah are just not caring anymore and liking stuff of each other?

Wonder what story Peter told Hannah? We saw him reference a "break-up" on their hot tub/sauna date.

It will be interesting to watch Hannah's body language and approach with Peter on the ATFR, now that this new information has come to light. Was his story vastly different than what was dropped in today's news cycle? Will Hannah still feel guilty about "breaking his heart" or just be done with him?

I can not wait for the ATFR episodes!!

Not sure I’ve fully prepared you #BachekorNation for what’s about to happen tonight thru the finale. I need you in full #TheBachelorette lockdown til this blows over

Oh Chris be on Lockdown!!! I believe the are writing the ending as we speak!JMO

@LeapofFaith wrote:what did i wake up to?! Bill is windmill guy? Jed is thanking Peter for taking some heat of him? and Tyler and Hannah are just not caring anymore and liking stuff of each other?