Caelynn is just the right person for Dean - looks what he did for her!

to Dean and Caelynn!

I hope he finds it soon!

So he kept the diamond in the kitchen junk drawer, wrapped in a napkin, and now it’s gone. That’s the most Dean thing ever. As they say on the podcast, Caelynn knows who she is marrying, so she can’t be mad.

I feel like it’s not absolutely official yet though. They were going somewhere without reception, and we haven’t heard from them yet.

A few month ago, Caelynn was on a podcast and said something like she didn’t really start living until she met Dean, because he broke her out of the uptight shell she was living in, and show her that the world is so much more. She said the last three years have been the best of her life.
They really seem like the perfect match, and it’s been great to see them grow together.

@blueblues that's so sweet. Thanks for the info, I didn't know that.

Now I can say it:

What a fantastic place to do it in!

But I wonder. Something with Caelynn’s body language makes me think that maybe he didn’t lose the stone after all, he just told her that to make the surprise bigger. That would also be a very Dean thing to do.

I’m sure we will find out soon enough.

What a spectacular backdrop!

Maybe he initially misplaced the ring then found it before they left? IDK but I'm looking forward to ALL the details!!

This adventurous couple are such a joy to follow.

First it was a Bachelor Baby Boom now it's a Bachelor Engagement/Wedding Boom!! Congrats to Dean and Caelynn! 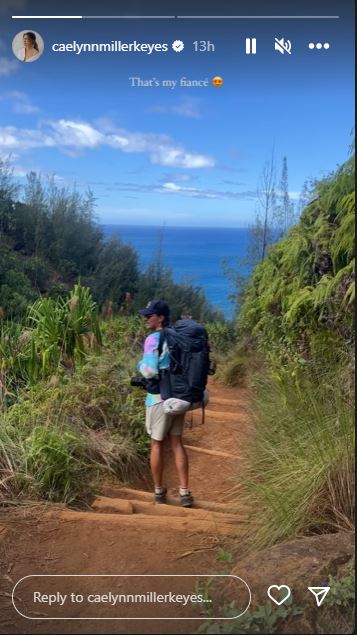 I'm so happy for them, especially Caelynn! What a beautiful setting for a proposal! Well done, Dean.

Dean has opened Caelynn up to a more carefree and adventurous life while Caelynn has offered Dean the security and love that previously he didn't feel. I have no idea what moved the stars to align these two but I think they are perfect for each other!