@Vjeff Thanks for that. I see. Typical case of getting the fame bite. I’m more interested in her older sister right now...thanks for the IG, I’ll go explore...

Sophie Monk, the bachelorette the year before Ali

@Astrobach wrote:@butterflylove Please, tell me more...I’m not following her and wonder what you mean by “ she gets more and more IG every time. “ ? She gets more followers?
Yes, the NZ model maybe?

She gets more IG as in her whole life is about shilling product, whitening her teeth, tanning, doing constant Q&As for her followers (these people really think they are fascinating don't they), talking about her book job and posting a story saying NEW POST every time she posts a picture. She pretended to be the sweetheart country girl who didn't care about all this but she is as Instagram as they get.

I'll give her this, she's been pretty successful at hoodwinking the public into thinking she's ~not like the other girls~ on the show

I can see her intro now... strolling along a dusty track in Parkes, chewing casually on an ear of wheat, wearing a checked lumberjack shirt (tied "seductively" into a knot just above her naval), denim jeans, tan boots...

"I live in the city now but I'll always be a down to earth, country girl at heart" (said in the most ocker accent she can conjure).

Advanced warning: I don't know how well I will be able to contain my snark this season.  It could get ugly.

Don’t contain it @Bobette let the snark flow freely, and it will be glorious!
I’ll add my voice to the others saying that I’m more interested in her sister than her, but lots of the general public seem pumped for Elly, so TPTB will be thinking mission accomplished

DM are speculating that Becky may be gay/bi since TPTB are casting both men and women.  Interesting if so.

In a major twist, The Bachelorette Australia 2020 has announced that there will be not one, but two women looking for love on the series.

Elly Miles, 25, who appeared on Matt Agnew's season of The Bachelor, is returning with her sister Becky, 30, in the hopes that they can both find 'The One'.

And if you thought that was big, there is another shock twist: the Channel 10 dating could be casting for both male and female suitors.

It then goes on to say that they are looking for 'single women and men between the ages of 23-35.'

Applicants must also be available to film from mid June to August for up to 12 weeks.

I think that's just their standard casting call though?  Back from when they were also casting for a Lead?

ETA: I went through some of Becky's friends on IG and they seem pretty hetero so not holding out much hope for a progressive rainbow-coloured season, but bumping this up, just in case @Astrobach called it.

I don't like Elly for reasons that a lot of you have mentioned here. Plus her Bumble add always shows up on my Tiktok FYP, it's annoying!

My very very early prediction for their season is that, Elly bows out and her sister finds love. I could see production using Elly to draw in an audience and her seeing it as an opportunity to boost her insta profile. 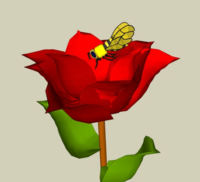 I would hope that casting two women...sisters at that...is more than enough shenanigans without having to add a bi/gay element to it. That would be even more forced. We all saw what a mess the NZ 2 bette experiment ended up being. Add that extra sexual element and it would be a total sh*t show that I would have absolutely zero interest in.

@Sprite it's 2020, a total sh*tshow is virtually guaranteed.

But yeah I think DM were off with their interpretation of the casting call - haven't found anything yet to indicate Becky likes the ladies. That would have actually made things more interesting to me, vs a couple of short blonde straight white chicks. Meh.

Radio host Ed Kavalee has gone public with a shock claim about one of the sisters who is set to star on the upcoming season of The Bachelorette.

Channel 10 announced yesterday that the next season of the show will have “double the romance, double the love,” with the two sisters looking for their perfect partners on the show.

Elly Miles, 25, is no stranger to reality TV having appeared on Matt Agnew’s season of The Bachelor.

Her sister Becky is new to the world of showbiz and according to Channel 10 the 30-year-old “recently had her heart broken”.


But that’s not the case according to Hughesy and Ed co-host Ed Kavalee.

The radio star claimed on air yesterday that Becky was in a relationship until recently but ended it purely so she could appear on the reality show.

“The person that she was with found out she was doing this show from the press,” Kavalee said.

The radio host said he was told by “people deep in reality TV” that it was the producers who came up with the unique twist for the upcoming season and they convinced the sisters to agree to it.

“Elly got in first (as the Bachelorette),” he said. “It’s then been brought up, ‘What about the sister? Let’s try.’

“So then behind the scenes she (Becky) gets across the line and then goes (to her boyfriend), ‘You’re out!’”

Kavalee claimed that Becky’s ex was “devastated” when he found out.

The Bachelorette Australia is coming soon to Channel 10

It just gets better and better doesn't it.