Sharna, if you're reading this, you should keep your mouth shut in the future cause you've let a lot of men down.

@Dumb wrote:Sharna, if you're reading this, you should keep your mouth shut in the future cause you've let a lot of men down.

@Enough That's interesting.  August 26 was four weeks into a 6 week shoot.  This whole season was ridiculously rushed so it's hard to know just what point in filming they were up to.  But it looks like Adrian gets at the very least two more dates, so increasingly likely he's F2 imo.

Can anyone get to this article?  It's coming up when I do a google search for Elly's name but when I click the link it just goes to the DM homepage.  Looks like it was posted then deleted but stored in cache?  Someone might have put it up prematurely.

Anyway squinting my eyes up L-R I see Sam, Pete, Frazer, Adrian, Shannon, Adam and Joey at the back... yeah?

ETA:  Weird still can't see it on the DM site but another site picked it up: 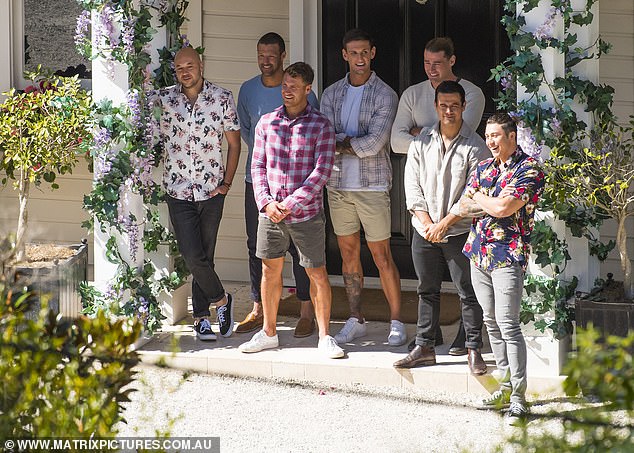 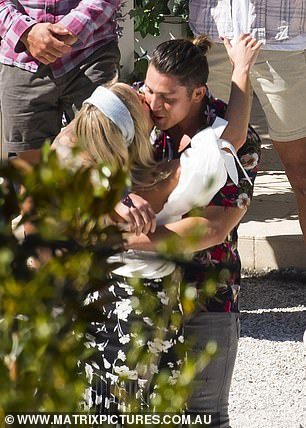 So Adrian's date is when there are still 7 guys remaining.

So 3 guys for Elly, and 4 for Becky?
Guess we'll see this the week after next, with Damien, Aggi & James to be eliminated this coming week.

So I guess no hometowns?

While there's still 10 suitors currently on The Bachelorette, Daily Mail Australia can reveal who makes it through to the show's top seven.

This means that while currently still on the show, Agostino Guardiani, James Boggia and Damien Stone will all be sent home in coming weeks.
The photos show the remaining suitors gathered on the steps out front of The Bachelorette mansion.
They were all dressed casually as they awaited the arrival of Bachelorette Becky Miles, who is sharing the role this year with her sister, Elly Miles
After pulling up in a powder blue vintage convertible, Becky, 30, whisked Adrian away for a private one-on-one date.
The 26-year-old kitesurfing instructor seemed ecstatic, happily embracing Becky in front of the other bachelors.

But there didn't appear to be any hard feelings with the other guys, with Shannon, 30, wrapping his arms around his excitable friend.
After seeing Becky and Adrian off, the remaining bachelors all turned and went back into the mansion.
Clearly enjoying himself, Adrian happily made a shaka hand gesture from the front passenger seat.

Meanwhile, a smiling Becky sat in the driver's seat as they made their way down a winding road.

A content Adrian extended his arm across the back of Becky's seat, after being farewelled by the others.
There was no sign of Elly on set, with the 25-year-old Bachelorette star seemingly absent from filming.

A cameraman and producer were spotted standing nearby, with both wearing black face masks amid the ongoing coronavirus pandemic.

Earlier this month, it was revealed Pete, 34, is the frontrunner to win Becky's heart, while Frazer, 28, is likely to end up with Elly.
Bookmakers TAB and Sportsbet listed both men as the favourites to win the top spots.

On Sportsbet, both suitors had remarkably short odds of $1.85 each, while TAB had Pete sitting at $1.20 and Frazer at $1.15.
These odds suggest some degree of insider knowledge that both men make it to the season finale, which was filmed on September 7.
https://www.google.com/amp/s/www.dailymail.co.uk/tvshowbiz/article-8846353/amp/The-Bachelorettes-final-seven-suitors-REVEALED.html

I sacrificed 36 mins of my life listening to So Dramatic and wrote this whilst listening so brace yourselves for a read.
Boys thought Becky was Elly's mum. Boys tried to avoid the girls.
Didn't want 1 on 1 dates so didnt have to kiss.  Joe was completely in love with Elly, guys thought it was a joke at first but then they believed him cause he kept saying how much he liked her and was super intrested in her. The boys said he was gonna get his heart broken cause she didn't like him as much.
Plan D Bachelor was Pascal. It was down to him and Locky. Produces called him and put him on Bachelorette.
And then there was something about James being a sponsered athlete but that can't be claimed as a proffession.
Nothing is been shown this season.
Damien drama isn't been shown where he was accused of taking all the girl's time.
Damien v James isn't shown.
A lot of other drama isn't been shown because of The Bachelor drama was too much, so they got rid of ALL of it, even though the producers were trying to create drama whilst filming. And Elly and Becky wanted a 'wholesome' season.
This week there is going to be a moment where Elly gets bruttaly rejected by Damien. Prodicers set them up for a kiss, Damien turned away and says No, sorry, not feeling it. But it probably isn't gonna be aired.
At Halloween party thingy:
Pete reveals he's been cheated on in prev serious relationship. Pete chated on a girl before his first marriage. Becky admits she's also cheated in the past. And a few of the other guys, including James and Joe who said they wished they weren't honest about it as it's not who they are now. James's girlfriend that he cheated on still doesn't know.
Everyone was super honest and forgot that there were camras and had been drinking a lot.

James was a huge villian but didn't get shown. James was really aggresive and targeted Damien.
James goes on a single date with Elly, then at the dinner table, with the whole guys, gets really aggresive targeting Adam. He was a big bully. After that incident he got sent straight home.

This is what Pascal had to say:
"The girls weren't up to the guy's standards. The boys were good looking, funny, ext.
Most guys thought the girl's sucked and were open about it and it was a common conversation.
And he said to Elly if she liked a guy like James, then he wasn't for her and told the producers he wanted to leave. And stuff with work. In his contract he was supposed to get 3hr a week to work but only got 20 min. Producers said we've already had 2 walkouts so they needed to make drama for the exit. He didn't care and said do whatever you want.
The boys were smoking in the house and the girl's didn't know. The producers told him to tell the girls, he said no I don;t want to lose any mates. But then he said yes as the producers said it was the morally the right thing to do. But the producers told the smokers and threw Pascal under the bus.
They needed something good to air so they did the Pascal exit. "

BUT, according to some of the contestants, Pascal did say all the stuff and didn't know it was gonna come back to bite him cause there were no camras around and producers told Aggi and James to tell the girls.

ALSO he was dating this girl and they were living together in Bondi. He dumped her for the show and said they needed a break from each other. She was heartbroken and blindsighted and had no idea he was going on the show. He realised he made the wrong decision and went back with her. Pascal said it was nothing serious and he was single.

Then there was something about Elly's hunting pics on her ig. and how channel 10 tried to hide that.
There was also something about how Elly and Becky are not as country as they make it look (obviously).

thanks for posting all that.

My goodness what a mess!

"Boys thought Becky was Elly's mum" I would die of embarrassment.

That all sounds very plausible to me.  Especially the part about the boys thinking Becky was her Mum.

The bit about hunting is true - I saw the pics.  Pretty tame but yeah, TPTB knew a dead bunny wouldn't go down well with the public hence her marshmallows on Matt's season instead of the fake gun she apparently wanted to use as her prop (seriously!)