I thought Ali and Taite were nothing but a shill couple but against the odds they've lasted so I think there's a chance for Angie and Carlin too. I can't imagine a relationship based around commercial opportunities but hey, shared interests can keep a relationship going! Even if that shared interest is in IG sponcon..

Tangentially off topic, but Imagine the show if the according to their contract, contestants weren't allowed to shill or do promo work once they start filming and then for 12 months after the show finished airing? And if they go on BiP that extends the ban. All promo for the network only.

Would radically change the show and who would sign up imo

I think this is a truthful article and for me it confirms Angie and Carlin are genuinely in love.

Personally theres been nothing about Ali and Taite, or any other couple, thats had me saying “bs!” like I am with Angie and Carlin. Yep they got lots of criticism too but I really didnt get it. I actually felt really sorry for Ali with the whole stair case thing too because I found it human and relatable (not personally haha) but lots of people know people who have screwed up a relationships because of booze and attraction imo. I’ve always seen Ali as quite gentle and even thought recently that maybe poor Ali should have aligned herself to a ‘kindness’ clothing business and worn the emblem ‘Kindness’ when the criticism kicked in

(and nope I'm not linked to them or any other bach couple, just a fan that has become more interested post show this season because I've found the marketing next level).

There's simply been so much more media, IG branding and sales from the start with Angie and Carlin. Every photo and activity has a promo or money tag imo. People have said on here that Angie and Carlin were ‘making hay while the sun shone’ and 'striking while they were hot news' etc. Probaly true and they've possibly made more money than other couples too, but seeing so much focus on generating money so early has also totally been why some of us see it as a sales partnership. Even after seeing them together on dwts, where I thought 'geez I must be wrong', I still see it as publicity and next level marketing. A big one for me is how easy it is to check out Ali and Taite and other couples Public SM grid and see how they're doing. Yeh sure they all sell or promote to varying degrees, but they are fairly transparent with their mix of selling along with sharing candid activity photos & videos showing them together imo. Always seemed like I had to follow or know Angie and Carlin to see if they were authentically together.

Like now, Carlin says he doesnt see Angie much, how much is anyones guess.........is Angie in Melbourne staying with Yvie while rehearsing and doing dwts and flying up to Sydney for sales promos with Carlin (thats what I've speculated from a quick look at Angie and Carlins IG - photos doing yoga on the bed - Angies birthday/jeweller promo photos - Valentines day photos with new mco sponsor and clothing tags), or is she living in Sydney and flying to Melbourne for rehearsal? Are there photos of Angie and Carlin hanging out with Yvie or family and friends etc that I'm missing?

DWTS is filmed in Sydney. The article I posted says Angue moved to Sydney to be near Carlin and to film DWTS. They do not live together and that is why seeing each other is difficult.

@Storybook wrote:DWTS is filmed in Sydney. The article I posted says Angue moved to Sydney to be near Carlin and to film DWTS.  They do not live together and that is why seeing each other is difficult.

Last year it was filmed in Sydney. This year it is being filmed in Melbourne

@Storybook wrote:DWTS is filmed in Sydney. The article I posted says Angue moved to Sydney to be near Carlin and to film DWTS.  They do not live together and that is why seeing each other is difficult.

Last year it was filmed in Sydney. This year it is being filmed in Melbourne

Yes, filming is in the Docklands Melbourne, my mistake. And no wonder Angie and Carlin have very little time together. She sats she trains in Sydney but does that include practising with her dance partner?

Now they have more time to be together. No more excuses

Angie did well to give DWTS a go, but she wasn't very good. She was too stiff and she did say she struggled being physically close to her dancing partner. It will be interesting to see what she does now

IMO Angie shouldn't have done DWTS.  It certainly didn't endear her to the public; on the contrary, IMO it only highlighted that people are sick of seeing her on TV, and further exposed the nature of their relationship.  The segment where Carlin came into the studio was cringeworthy; I saw no intimacy between them and it was just awkward IMO.

The main difference I see between Ali and Angie is that despite her many MANY flaws, IMO Ali is a warm, loving person who was 100% on board with the show concept.  She was the perfect followup to Nick because there was NO WAY she wasn't picking someone and I totally believe she was genuinely in love with Taite by episode 2.  Silly girl.

Angie on the other hand comes across as cold and self-centred, IMO.  Her Valentine's Day posts are a perfect example: the first was nothing but advertising and she didn't even mention Carlin's name in either.  The message of post 2 was that he was in town to watch her dance (damage control from her forbidding him to come the week before IMO). 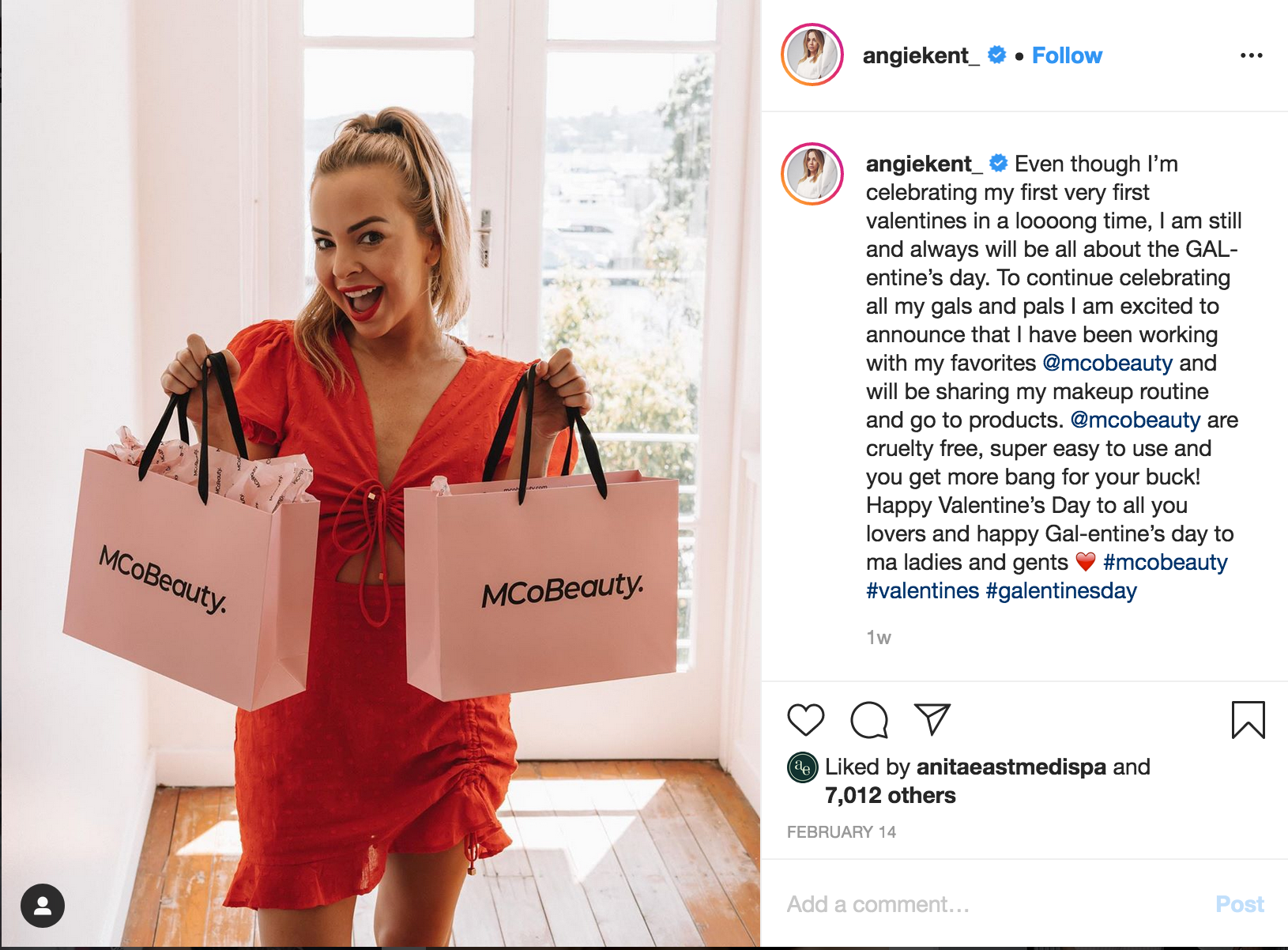 ETA:  Actually I just realised the second one was Feb 15.  So she posted nothing at all about Carlin on V-Day. 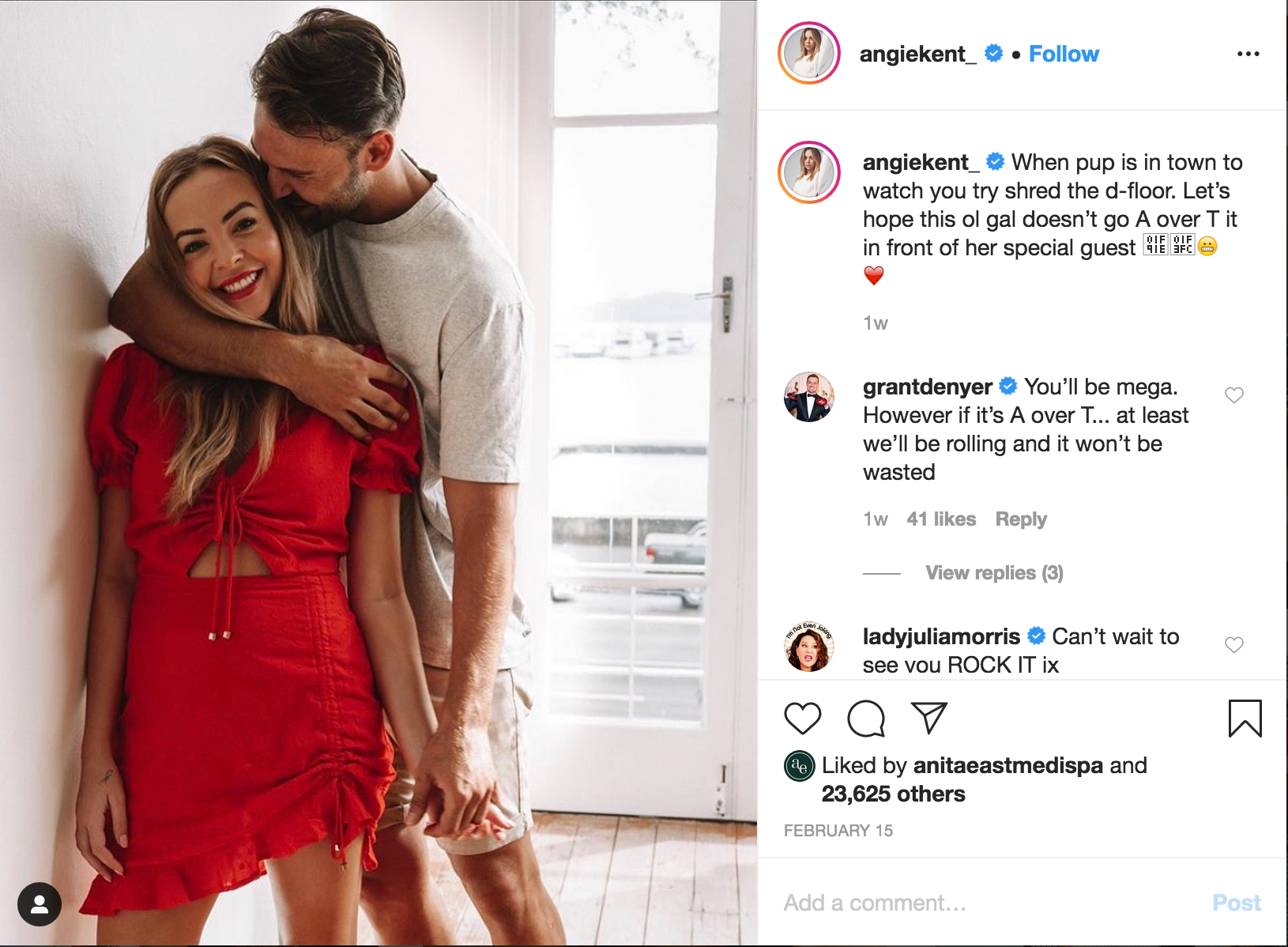 Perhaps Angie just isn't a relationship kind of person.  That's fine, but don't pretend you are and expect people to believe it.  IMO there is nothing to this arrangement other than trying to keep up appearances for fame and financial reasons, and she would have dumped him by now if he weren't serving that purpose.  I hope she puts and end to the charade soon.

Angie gave it a go and imo, that’s all that matters. I have two left feet so I applaud her for having a go. Pity it wasn’t Carlin on the show - he’s got rhythm!

Plenty of "bad dancers" have gone on DWTS and lasted till mid-season because they were liked by the public.  Angie was voted out second, despite the fact that she's a Ch 10 face - that speaks volumes about her popularity with the audience IMO.

IMO this article is nothing but retrospective face-saving by Ch 10 after the public votes revealed how unpopular Angie is.

And I don't believe for one second she was reluctant to do the show - IMO she believed she was a "star" who would be loved by the public in the same way she was on Gogglebox and IACGMOOH.  Recall this comment from when she was announced: 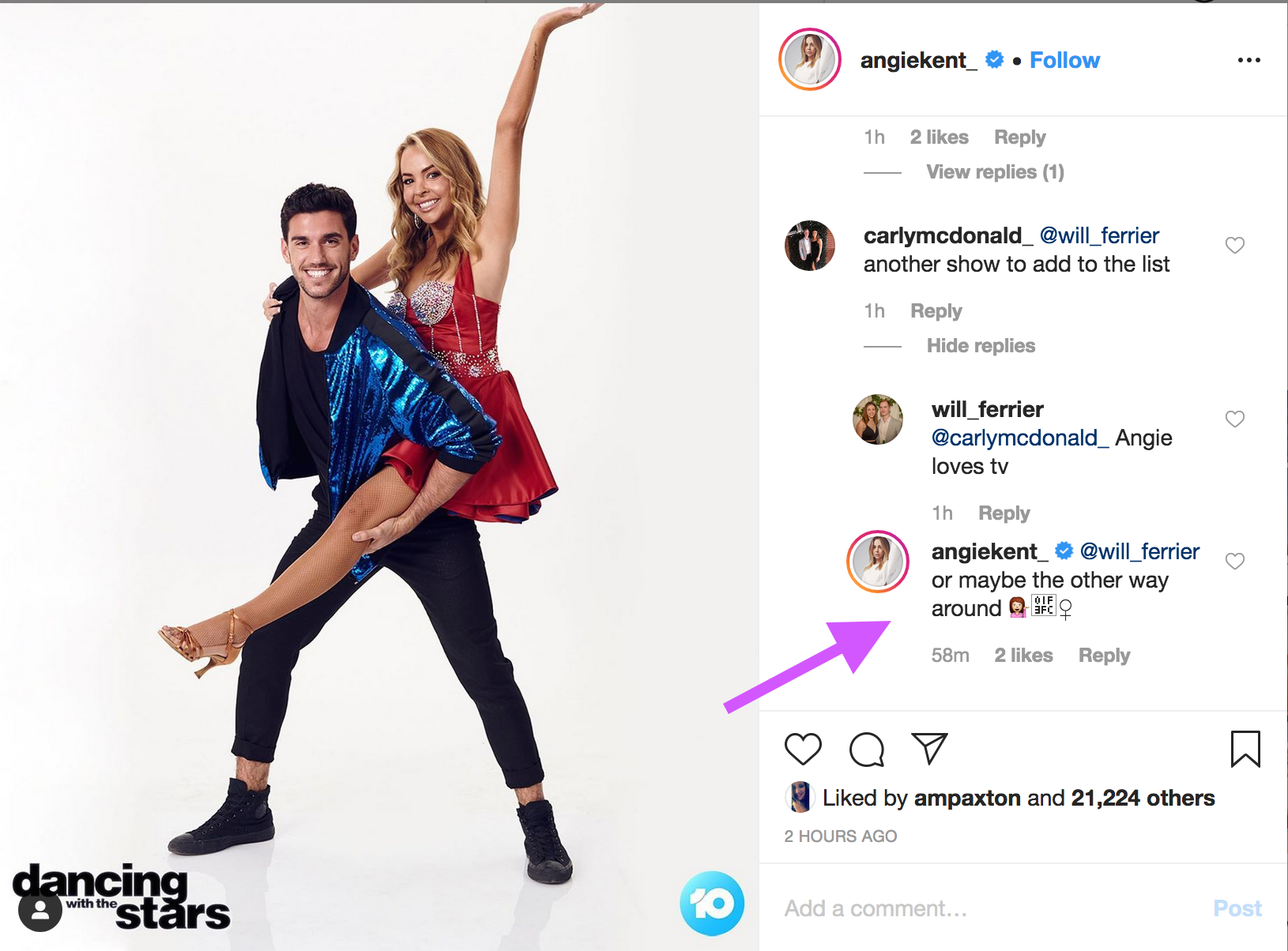 IMO those are not the words of someone thinking:

"mmm, yeah too soon I think for Australia, and for me'."

Easy to pretend she thought it was "too soon" though, if she has since realised how the public really feels about her, IMO.

Angie was shock she got eliminated.

The Bachelorette star has a theory about why she failed to capture the public vote.

HERALDSUN.COM.AU0:34
Dean Wells' awkward performance (DWTS)
Dean Wells was roasted by viewers on social media after this Dancing With The Stars performance.
Angie Kent believes her surprise early exit from Dancing With the Stars was in part due to tall poppy syndrome.

The Bachelorette, who found love with Carlin Sterritt, jumped at the opportunity to be part of another reality show.

She said maybe people have an issue seeing others, particularly women, succeed.

“I don’t know how Australia works … I do feel like maybe (there was tall poppy syndrome) a little bit,’’ Kent said.

“People get very funny when you do too much too soon. As a woman you cop it. You should not be getting put down and that needs to change.”

Kent, who has appeared on Gogglebox and I’m a Celebrity … Get Me Out of Here!, said she was so shocked by her elimination she could barely remember the moment she was in the bottom two with Travis Cloke.

“I remember dancing and I remember being bottom two, but I don’t remember anything else,’’ she said.

“It’s a whirlwind after you perform.

“You want a chance to really grow and get into it but I did the best I could. I feel bad for (my dance partner) Julian to not go further.

“It was such a different show to anything I’ve ever done.

“I’m just Angie, who was herself in front of the TV, in the jungle and looking for love.”

Kent said she was excited to get back to Sydney and spend more time with Sterritt. (I thought her training was in Sydney. She only fly to Melbourne for the dress rehearsal and live ahow)

“We need quality time,’’ she said.

“I have more time to spend with him now which is good. I think this old gal needs a rest.”

Firstly she didn't acknowledge that her dancing was not very good. Most of her dances have very little dance steps.  She may have put in a lot of efforts but the other contestants seemed to have done more. Some were still working.