Of course, once again, there are people (from the Extra clip) concerned about Colton's feelings. What about Cassie?? Those details in the court document are scary af and I feel so sad that she had to go through it.

Rachel has always been my favorite person from BN but that was a bad take for sure. I'm giving her the benefit of doubt she said much more than that but still, she shouldn't have said that, period. IMO.

The part in the court document where he yelled at Cassie, “I will keep you accountable,” after Caelan, her ex-boyfriend, visited her at her place, which he spied on and sent text messages to her about are super creepy. 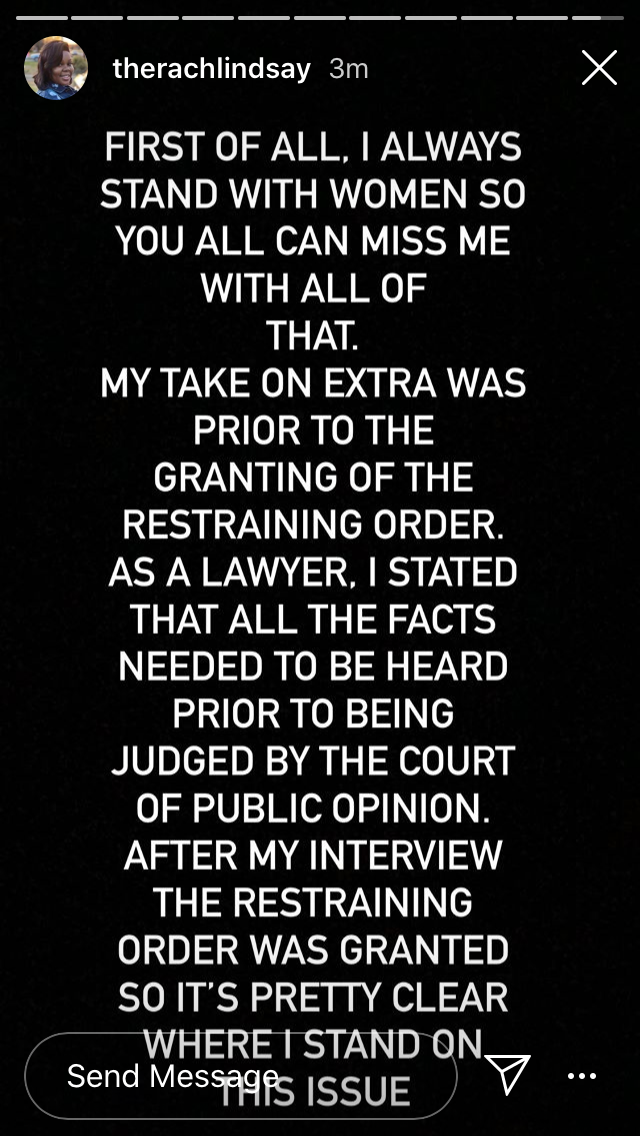 I don't understand when people say that we have to hear Colton's side. Like what could make placing a tracking device on her car, stalking her residences, and sending her harassing text messages be justified? What could he possibly say to make all that be ok?

What an absolute trash person Colton is. Truly disturbing. Disappointed in Rachel's take.

“I sTAnD wItH wOmEn”. Except that when it came time to put it into practice, she didn’t. Like, she didn’t even bother playing both sides. She just went into full coddle mode for a grown man stalking his ex. Just pathetic. Jmo.

Her follow up was a big miss. At least bring the same energy you had when you were worrying about him, not a weak 'you know where I stand' story after uploading multiple slides thinking of Colton.

Also she filmed that today today, not like when the news broke. No excuse.

Wow! A lot more stuff to unwrap since my last post!
@ReneeM I’m not sure how you read these comments as protecting or taking Colton’s side because first, this is snippet form a longer conversation, second Rachel does say it never happened in Bach history and it’s very serious, and when she says ‘ I hope he’s ok’ I read it as ‘ I hope he’s not unstable enough to get worse - on himself or her- or act even more abusively’ because, as she says third: she knows how much public opinion is affecting Colton and his state of mind, she hopes it is not pushing him over the edge.
Which is I think a very valid point to make. As I mentioned before, Colton is now feeling not only abandoned and betrayed, but cornered and publicly shamed, and as I have unfortunately personal experience, this can be backfiring in making him seek revenge in order to regain control - even if illusory , it’s still what he’s looking for. From his reactions to the reception and broadcasting of the TRO, he is not apologizing or contrite, instead he’s pulling all his PR ressources on curating his image. Notice that they refer to Cassie’s side NOT COMMENTING.
That tells me that HE is angry and is fighting this and is not in a good place to
«  peacefully «  resolve this with Cassie in a court of law.
I’m sure Cassie didn’t anticipate that he would react that way, but that’s why she needs protection and support. Colton has been caught on telling many lies, and I’m sure he’s not happy with this, being use to have the upper hand and smile his way out of things that are hard. His texts really show how immature he’s reacting and how much inner work is needed to uncover and heal the underlying issues that caused all this mess.
And IMO, he is not NOW a guy who will just stop , because he
‘ realized he made mistakes ‘, that’s what worries me. He can prepare to go to Court and get his act together to look good, and deflect everything to gain Cassies and the Court’s trust, and then if there’s no consequence, he will seek to get closer to her again on the pretext to work things out in private etc... which would be DANGEROUS for her to do. It is a very delicate and complex issue and now that the public is involved it increases its volatility level even more.
So I repeat I PRAY FOR CASSIE to have not only personal strength, but strong LEGAL and personal support, because abuse is a cycle and to break it requires knowledge, strategy, time and motivation to end it.
JMOAA

Honestly very disturbing situation and my 1st thought without actually knowing much about either of these 2 people was "I hope she is having the support she needs". Because for any woman having to deal with an unstable ex and scrutinizing public opinion has a weight on her shoulders.

Secondly, as some before wrote (gabriele, renee) the fact that a man, an adult, doesn't understand the boudaries and doesn't comprehend the severity of his actions is alarming. Further justifications, explanations of his actions don't do him or a victim any favor, it's just enabling this behavior. But the fact remains, he is a perpetrator in this story, not a victim. So it's disturbing reading his actions being analyzed, since IMO there is no other conclusion than it's his wrongdoing he continues to not take accountability for and instead is putting out the excuses for his "mistake in misunderstanding". That shows his lack of understanding what he has done and that's disturbing in this story the most.

I'm not here to judge Colton, neither am I here to crucify him. But what worries me is seeing the sympathy being given often to (only) white male culprit, in the length of explaining his "trauma" that somehow explain his actions. Somehow. And yet many people are dealing with trauma and their actions that aren't violating anyone are being criminalized.

@Astrobach Rachel chose to post a snippet on IG speaking about a man stalking & harassing his ex to the point that said man’s ex had to file a restraining order. In that snippet that Rachel chose to post, it’s 50 seconds of them expressing concern for the alleged perpetrator of a crime & his image and at no point did Rachel nor her cohost express any concern for the actual victim. What about what public opinion is doing the Cassie? & that’s in addition to the emotional toll of what Colton’s already put her through. It’s extremely problematic to me that the public focus of this conversation has been on Colton’s well being while ignoring Cassie. Jmo.

@happygolucky @ReneeM I feel I need to clarify that I wrote my post before  seeing/ reading the post Rachel made assuming she knew about the TRO already. It is a snippet from Extra not from Rachel’s account and without hearing their WHOLE conversation, I’m not gonna shoot anyone.

Second, in no way am I justifying or excusing Colton’s conduct, and frankly I very rarely had any sympathy for the guy way before all this, so that’s not at all what I’m communicating. My whole point is that IF Colton’s actions are that abusive and HE still is reacting the way he is right now, HE DOESN’T get IT and wishing he would  ‘ STOP ‘ is not gonna work as I believe he is unable to acknowledge his responsibility and therefore it’s MORE dangerous for Cassie. And because I care for Cassie’s well being, I’m hoping she has the proper support for her to navigate this crisis because it ain’t over. She is wise to not  engage publicly about it as people are always going to emit their opinion on every piece of media that comes out. That’s where Colton is PLAYING the game and it’s working, ( he’s garnering fan’s pity or whatever, I don’t follow him ) it’s not because I care less about her but quite the opposite, I’m showing all the ways she is in possible danger and it’s worse than she originally estimated.

In the end, whatever circumstances we’re dealt with is a test of our character, morality and maturity. He has made his choices, he will need to cope the consequences now and it’s impossible for any outsider to know what is really going on inside someone else’s mind. I do have my opinions based on perception and my experience and just hope he wakes up and also that Cassie cuts ties completely with him to safeguard herself and begin healing.
JMO

@Astrobach Unfortunately it doesn't really matter if Cassie cuts ties completely. She and her whole family unfollowed him and she got a TRO. I don't know how much more she can do to get him out of her life. The rest will be up to him.

Looking back, I thought it was odd that after they had split he was papped walking around by her parents home in Huntington Beach. That is not where he lives is it? Now we know why.