Chase was a swimmer for this recreational swim team along with a USA swim team called The Walnut Creek Aquabears before swimming in college. He was also a coach for young swimmers with this same team.
http://www.theveasygroup.com/pastwork/vvst/aboutus/coaches.html

It's really hard to post swim meet programs or meet sheets because they are so long. Plus I don't think most people would understand how to read them. I thought this was the best source for this information.

@Dahling thanks for providing the link to the swimming background!

He wasn't on a real show with Ashley I and her sister, Lauren. At the beginning of the pandemic, they decided to try and fix up their friend, Naz, who used to be a producer for the Bachelor Franchise and they now do a podcast with her. They had 8 guys that Nah went on a blind 15 minute Instagram Live date with initially. Chasen was in Naz's top two, but he told them that he had to drop out and wouldn't tell him the reason why -- now, they know it was because he was in talks to be on the Bachelorette. I watched these "dates" on Instagram and although part of me felt bad for Naz because she ultimately didn't end up going on an actual date with anyone from doing this -- I also had a hard time feeling sorry for her because she didn't pick anyone from the LA area. The guy she ended up as the last one standing so to speak -- lived in Dallas. It seemed like she was showing interest in guys that Ashley and Lauren thought (and even podcast listeners) would be good choices for her. She seemed interested in Chasen, but although he seemed nice -- he really acted like he wanted to pursue Naz to "win the competition" until he heard from the Bachelorette. Therefore, I am trying not to prejudge Chasen -- however, I would not be surprised to see his competitive side come out on Clare's season. All JMO.

@suzq Thank you for filling in the blanks. I thought is was worth mentioning even though I never saw it myself. I think there will be many that will want to win the “competition”. Hopefully Clare can decipher who has the right stuff for her.

Regardless of who Clare picks, the guys who hang around long enough get to join the “club” (the BN club) and benefit from that.

@Dahling. No problem. Yes, even if they can't be the Bachelor -- guys know that if they stick around long enough that they will benefit from being part of the BN club. Hope there are still some ones there that are really interested in Clare. 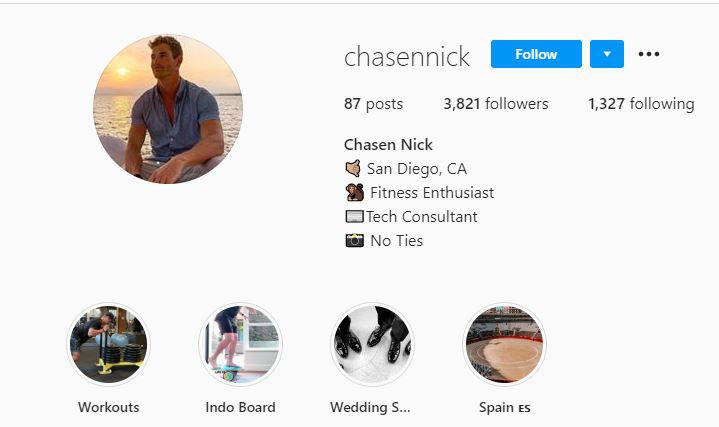 I think he's still in. 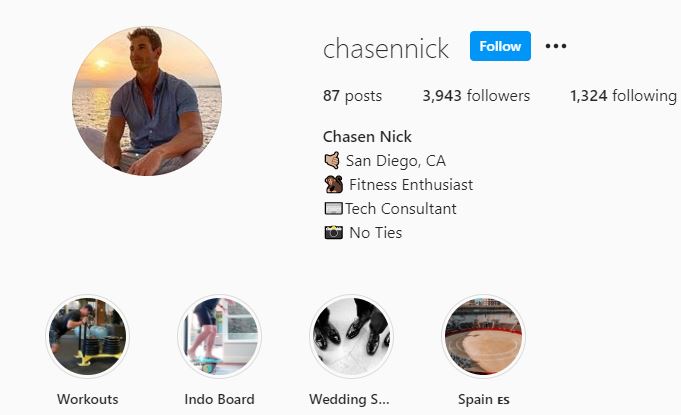 Chasen Nick followed someone not too long ago.

I'm not sure who he followed recently because I didn't take a s/shot of his followers and following but he has dropped in followers so that may prove he is out.

Chasen grew up in the world of competitive swimming and is ready to win the race for Clare's heart! The ultimate romantic, Chasen says he has never been close to getting married but hopes to one day have a long and happy marriage similar to that of his parents who have been together for 35 years. After ending a two-year toxic relationship with his co-worker, Chasen says he is finally in the right headspace to find his future bride. Chasen's dream girl is the perfect combination of beauty and brains. He loves women who take pride in staying fit and can carry on a meaningful conversation without any awkward silences. Chasen considers himself to be very romantic and loves making his significant other feel special. He says there is no better feeling than seeing your partner smile and knowing the reason is because of you. He is a self-proclaimed adventure seeker and loves to say yes to things other people might consider insane. His latest insane adventure? You're looking at it!

- Chasen's nickname is "Wolverine" because, according to his friends, he recovers and heals quickly.
- Chasen can't wait to get a goldendoodle puppy one day.
- Chasen once swam from San Francisco to Alcatraz wearing only a pink speedo.

I like what I've seen of Chasen so far.