@butterflylove wrote:Nadine (and Areeba) are both back to public IG accounts. That was short lived and I don't really know why..

Maybe they did a clean up? You know, so they don't offend anyone who might buy any of the cr*p that they will try to shill.

Unfortunately for her she won't be shilling anything with 1800 followers. Too bad her incessant attention-seeking didn't work out.

Well, no doubt there is still the hope of BIP and a redemption edit.

She thinks she's too good for BiP, apparently.  I'll try to find the quote because it was quite hilarious.

She also said she wouldn't consider going on MAFS unless her boyfriend was allowed to do it with her - as if she's so special they'd literally change the whole premise of a show about marrying complete strangers just for her.

ETA:  Found the quote - posting so there's a record of her saying she won't return.  No take backsies!

And now Nadine Kodsi has revealed that she has no plans to appear on spin-off series Bachelor in Paradise - or any other reality show for that matter.

'I don't have time to just pretend and play along and be degraded in that way,' she continued.

'I wouldn't do Married At First Sight either unless my partner could join me,' she added, confirming she has found love since appearing on The Bachelor.'

What a delusional narcissist she is.

does she... not know that MAFS stands for married at first sight??

@leavers wrote:does she... not know that MAFS stands for married at first sight??

Maybe not so "highly educated" after all....

ETA:  Actually Ch 9 here's an idea: cast them both on the show... then marry them off to different people.

@Bobette wrote:Not sure if Nadine has a sponsorship deal with Sportsbet but she posted an IG story implying Bella is the winner, while encouraging people to "bet on both evenly just to be safe". 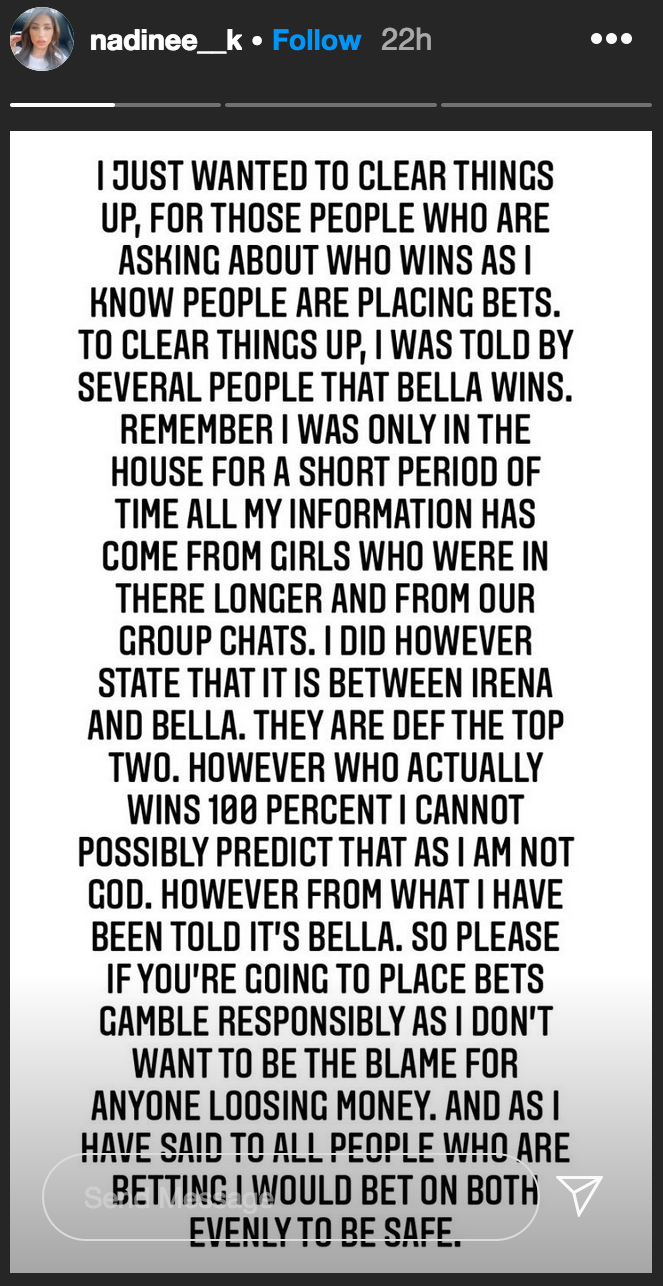 What an idiot - that's not how betting works!  Betting both ways just guarantees money for Sportsbet. Oh and implying you have inside information that Bella wins is flatout deceptive.

@Vjeff wrote:This is literally so stupid that I would think it must be a sponsorship except she doesn't have enough followers to be sponsored by anyone. They really managed to find some braindead girls this season.