There was a live conference on IG after the premiere with Grisha and Sasha was taking part as well. And Grisha asked what he felt when he got out of the car.

Sasha said that as soon as he saw Ksenia he was lost.

His nerves got the best of him. His hands were shacking and all his ideal imaginations on how the first meeting is going to be brutally felt apart. The chain of the medallion got mixed up but he wanted so bad to see that gift on her neck. As he tried to solve it his hands were still shacking.  In his eyes he looked like o fool to her and not that cool guy who got her attention on IG. He lost even his ability to solve the awkward situation with a joke. Briefly said he was a nerve wreck. When he entered the room with the other contestants he was mad. Mad at himself that he was so clumsy with the chain, that his hands were shacking, that he couldn’t solve the chain. It was the start to his strange behavior. After that he closed off himself and put on the mask of the comedian. It was a defense mechanism. He wanted to redeem himself in her eyes  but instead he made it even worse. You probably all experienced those kind of situations where guys started to acting weird or saying stupid stuff but not because they are idiots. Because they really like you and are just too nervous and want for you so bad to like him too. That is the identical situation we got here as well.
So most of the time he was sitting alone for himself and was probably in his mind going through that failed first meeting. That is his perspective.

And now here is her perspective:
She was watching him during the party. Because she was intrigued by his talent, depth and by his intelligence. She loved his gift and thought that their first meeting went great, she even was planing to give him the first impression rose (that is what she said to him during the rose ceremony). But now he seemed all of sudden weird. He is closed off and does not pay to her attention or try to catch it. She is asking herself what happened.

Now I am gonna post snippets from the interview Ksenia gave during the „strong women“ campaign.

@natik wrote:Brought you an interview Ksenia gave for the social campaign regarding strong women. She also talked there a little bit about her experience on the project. She starts talking about it at 10:17. I tried to translate it as good as I can and I hope it makes sense. It was not easy so please have mercy with me.

"....Because there were situations, when I seemed to be thinking about one thing, but in fact the completely opposite happened, for example ... a man, let's say, closed of himself at a certain moment and my thinking was that he has lost interest in me but in fact everything was the other way around. He had a completely different situation in his head and it was completely unrelated to me..."

She doesn’t wanted to guess so the best way was to ask him. She invited him for a talk at the bar.

Here is the video snippet:

She is saying in her ITM`s that he is acting strange. And that something is bothering him.

Ksenia: „I have a feeling that you are not interested. You are acting a little bit weird“.

Sasha: „I am not feeling comfortable in that atmosphere. That is the reason why you maybe have that feeling“.

Sasha ITM: „I am not feeling comfortable among those guys. I don’t like the way they are talking, those are not people with whom I usually interact. And that is maybe the reason  why I closed of myself and was only sitting there for myself“.

Ksenia: „But you knew the concept of the show“.

Sasha: „Of course I knew. But I was imaging it absolutely different“.

Ksenia: „So you imagined that I am gonna blow the whole thing off and ride with you into the sunset“.

Sasha: „No, not at all. We need to wait first for two months and see what happen“.

Ksenia ITM: „So I didn’t get a real answer he was put himself out of it as always with a joke. But without a doubt he is a very interesting man. And I decided to ask him the one million question“.

Ksenia: „Now honest I have a strong feeling that you are not interested in me“.

Ksenia: „Ok then can you make it somehow absolutely clear to me that you are interested. Here and now“.

And as answer he was again trying to joke his way out.

Ksenia ITM: „Maybe it is a mask and his protection shield. I don’t know what happened because we were already familiar to each other through IG“.

Sasha: ITM „The thoughts in my mind right now are like a milkshake in a mixer“.

Sasha: „Thank you that you paid attention to me“.

Ksenia: „It was very hard not to pay attention to you“.

Sasha: „I honestly answered you that I am not feeling comfortable. But it is better now“.

Ksenia ITM: „He is very talented and creative and those qualities are attracting me. But after the way he acted I am not sure if I want such a partner and if I need such a partner“.

@Sprite So to answer you question. She was fearing that after he met her in person he lost interest in her. She desperately waited for him to do something and to show that it isn't so. And all of that because she was already smitten with him during their conversations on IG. She said during the rose ceremony to him "Sasha I was waiting today for you but something happened with you during the evening. You were far away from here". During their conversation you could feel how she is worrying that he lost interest. That fear you can sense in her voice and in her mimic. She is absolutely fascinated by him, by his intellect, his talent and she was fearing that she is not interesting enough for him now when he finally met her in person.

@Idlemess Thank you for your summery! It was interesting to read your perspective. I am looking forward to see if your sympathy is going to change in regards some contestants.

@natik Thank you for the explanations.

What happened with that last rose? Were producers trying to freak him out? Was there always that rose and they just hid it or did Ksenia ask for another one for him?

Almost forgot. The only time where Sasha came out of his shell was the moment where he was telling the guys about his daughter. That is the moment where we saw not the comedian but the person Sasha. Here is what he told them:

Sasha: I have a daughter, Ella, she is 12 years old. I love my daughter and I am happy to spend all my free time with her. 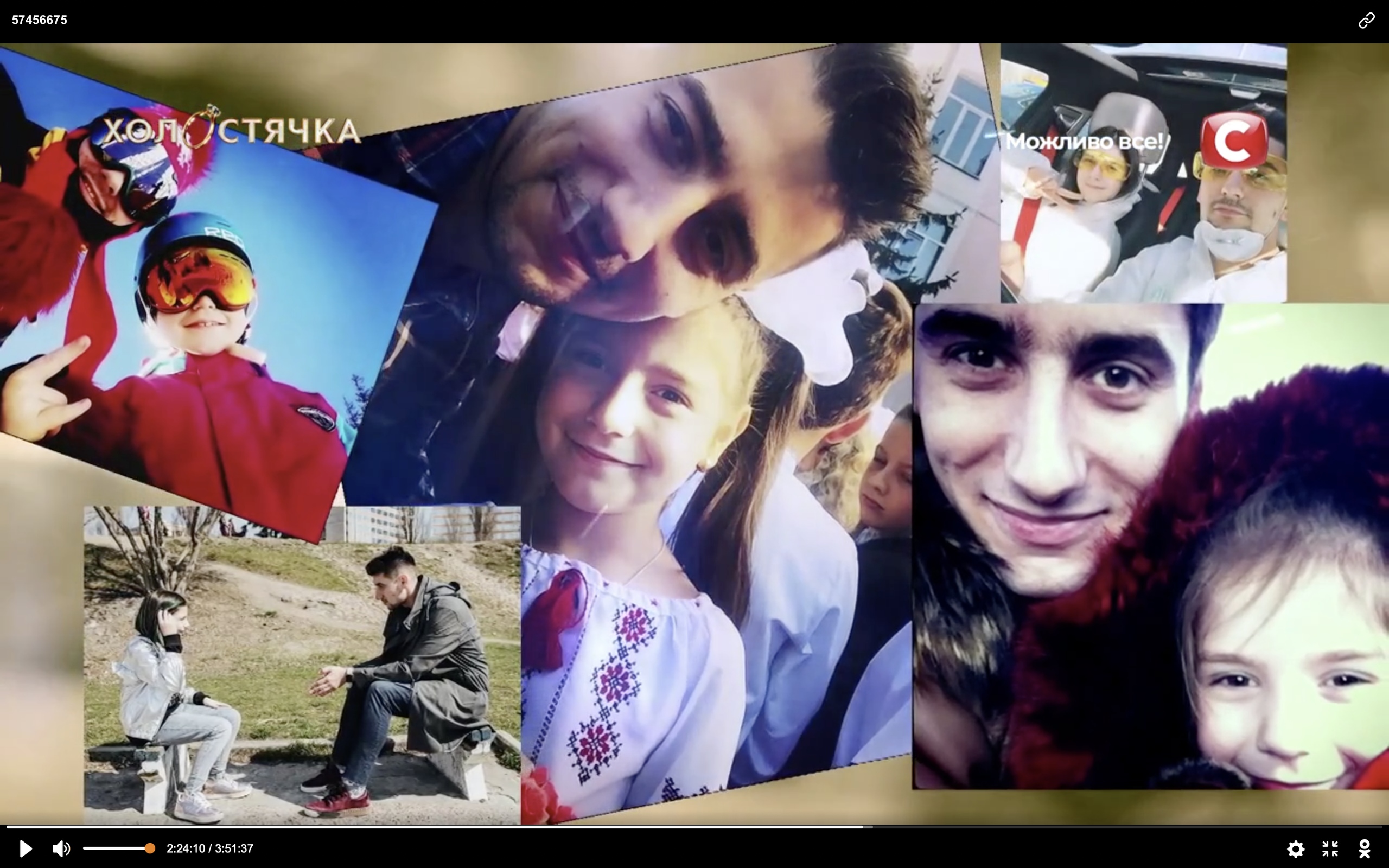 Nasar: Do you see her often?

Sasha: Very often. I grew up without a father, as a child I felt that I did not have a father. That there is no one to play soccer with. Or the boys told me that they went on a hike with their fathers and I went on a hike by myself. Therefore, I believe that I should devote a huge amount of time to my daughter , so that she does not feel what I felt in my childhood.

@Sprite The rose was always there I think it was Ksenia`s decision to make him a little bit nervous. It was her wake up call to him. She said that jokes are great but she wants to see the real Sasha and that he needs to open up to her so that they have a chance to develop a relationship.

Thanks again @natik. I remember reading somewhere that many comedians use comedy is a way to hide the pain they feel in their lives. That makes a lot of sense.

@Sprite That is truth. He is actually a great, thoughtful guy. He is not scared to take responsibility. He is just misunderstood.

Finally finished the 4 hour marathon, but as usual it was worth it.  Ukraine Bach know how to cast well imo - the guys are all different and entertaining.  I think Sasha and Andrej are going to dominate the show and I don't know how I feel about it yet.  Let's hope they show more of their personalities and less of the comedy routines (not that there is anything wrong with funny commentary).

A couple of things I'm going to say: Sasha has been married twice already at 33?  I know I'm putting my own values on that, but wowsers that's a red flag imo.  Also, I don't think I've ever seen a Bachette contestant with as much alpha/sexual energy as Artem.  I literally didn't know where to look when he was on screen

@Agent99 wrote:Finally finished the 4 hour marathon, but as usual it was worth it.  Ukraine Bach know how to cast well imo - the guys are all different and entertaining.  I think Sasha and Andrej are going to dominate the show and I don't know how I feel about it yet.  Let's hope they show more of their personalities and less of the comedy routines (not that there is anything wrong with funny commentary).

A couple of things I'm going to say: Sasha has been married twice already at 33?  I know I'm putting my own values on that, but wowsers that's a red flag imo.  Also, I don't think I've ever seen a Bachette contestant with as much alpha/sexual energy as Artem.  I literally didn't know where to look when he was on screen

I know right?! Four hours is insane but actually it felt like it was over pretty fast. I could have watched even one more hour longer. I am glad you liked it.

Yes, he married the first time when he was 21 years old. I guess it was something like a youth mistake but he has a daughter from his first marriage and he loves his daughter. So at least that is a good thing what left from that marriage. There was some information in the press why his marriages didn't last. So the first one didn't last because they were too young and naive and they both developed in different directions. The second time he married when he was 28 years old. They separated because it felt for both of them like they were more platonically friends and not lovers. And they both decided to get a divorce. There were with both women no scandals. So it was both times a clean cut. He is on good terms with both women and there is no bad blood.

Regarding Andrej and Sasha. You are going to be surprised in a good way. They both are gone make an interesting and huge character development.

Thanks for all the explanations @natik.

I'm not finished watching yet but I am loving it!

Will each episode be 4 hours?

I'm not finished watching yet but I am loving it!

Will each episode be 4 hours?

You are welcome. No I thinks it is going to be about 3 hours plus one hour after the episode show.