butterflylove wrote: Nikki Webster reveals she's keen to be the next Bachelorette

We could be set for one hell of a Bachelorette 2021 season should Channel 10 take up Nikki Webster’s recent offer.

The 33-year-old Strawberry Kisses singer, who rose to fame following her performance in the 2000 Sydney Olympics, told Woman’s Day she’d be keen to take on the reality TV role next year.

The children’s dance studio owner and mother-of-two admitted she was ready to find love again after splitting from her husband of six years, Matthew McMah in 2019.

Dirty Street Pie wrote: A thousand times no to Nicki Webster as Bette

She’s a lovely girl, my daughter used to go to her dance school in Sydney, but if TPTB have learnt anything at all from this year it should be that the Bette must be aspirational! She must be either smoking hot (Sophie) or conventionally attractive but with something charisma about her (Georgia).

IMO Nicki is neither of those things, the guys would be super unimpressed, and we would get a repeat of this years dumpster fire, with the added bonus of children being involved. It’s a no from me.

I don't think Nikki's seriously in the running but if TPTB were to cast yet another vanilla, caucasian, blonde, affluent quasi-celebrity then they are beyond redemption and the AU production deserves to be axed, IMO.

A lot will be riding on the 2021 season and they need to come up with someone exceptional, different and desirable, IMO.

Sprite wrote: Please no. She is 33? She looks a good 10 years older, plus kind of harsh. She seems to be attention seeking since she just finished another show. No!

Idlemess wrote: 100% agree with all of the above

butterflylove wrote: Hard agree, I loved Nikki as a 7year old. Our class concert was to Strawberry Kisses, but I don't want to see her as the next Ette. She's blonde for one, and I don't want the same model of person as the last 8 leads.

Give us the diversity we desperately need. Someone like a Brooke or Renee, or someone completely new that has charisma and presence (which Becky didn't have). We need to be casting and representing multicultural Australia.

Names being thrown around by The Wash for 'ette:

There's no new name being thrown in the mix, but they popped up on my IG explore, and I was having a browse and came across the article.

Renee - From this list, a strong second choice.
Brooke - my pick, personally.
Nikki - big no. Just, no.
Litney - I love her, but surely not for Bachelorette.
Bella - you're kidding.

Could have written those opinions myself @leavers

I could not stand to have Bella, Litney or Nicki would be painful to watch as I just don’t think the guys would be into them. Brooke would be the best IMO, and I think TPTB will announce Bette early this year so that the guys know who they’re in for so we don’t get the whole “disappointed” thing that we had this year with Elly and Becky.

@leavers @Dirty Street Pie I agree with your thoughts but for me it's Renee over Brooke.  Nikki is a joke IMO, and considering she only recently split with the father of her young children she should be focusing on THEM, not courting a TV appearance, IMO.  Litney may be a fan favourite but is too much of an individual to appeal to a broad spectrum of contestants and being Lead would be terrible for her mental health IMO.  And Bella has proven herself to be a fickle, fake, fameseeking desperado, IMO.

I think TPTB realise they need to address their diversity issues in a big way, but IMO they'd probably opt for Renee over Brooke because she's less fiesty/opinionated and would be easier to manipulate.  Also she's more recently in viewer's minds after her BiP appearance, and her storyline was tailor made for Bette ("screwed over" by Bad Boy Ciarran then apparently cheated on by Matty post-show).  I can visualise her intro package in my head already.

Also I think Brooke shot herself in the foot with that IMO producer-scripted Fiji Fling with Alexnation.  Some viewers seem to have trouble wrapping their heads around the concept of bisexuality and I think if she were cast as Lead (assuming it was a normal all male cast) you'd get some people saying "wait, isn't she into girls?" and others saying she must have been faking her bisexuality for BiP (not helped by the fact that she and Alex both immediately went back to dating men).

Furthermore I feel like TPTB might be keeping Brooke in their back pocket in case they ever want to shake things up with a mixed-gender cast.  I personally can't see that working at all (too much potential for contestants to be hooking up with each other IMO).  If TPTB get desperate enough for a ratings gimmick I could see them giving it a shot but after Elly & Becky's sh*tshow I think they're more likely to play it safe with a more "normal" season in 2021.

So yeah from that list I think Renee is most likely and it seems Sportsbet concur.  They have Nikki as their favourite (a red herring on the back of recent media coverage IMO) and significantly, Renee is not on the list.  Brooke's odds of 6.00 rule her out IMO. Side note:  I'm not a fan of The Wash.  They're a group of paps and "journalists" who have a symbiotic relationship with z-listers and ex-contestants so everything they publish always smells like marketing to me and that article is another example. 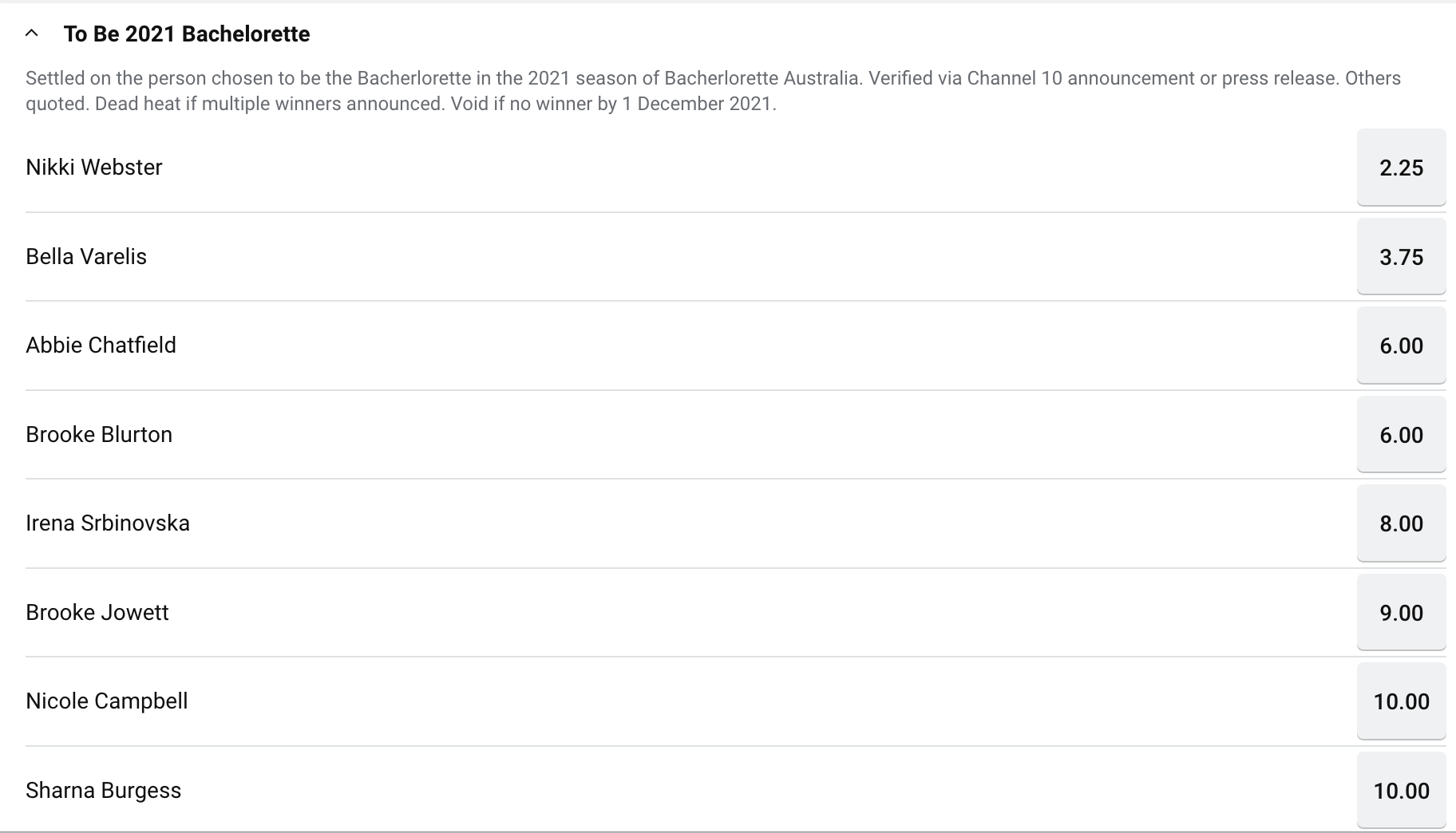 Dunno how much I believe those bets if Abbie is considered a serious contender. She's been pretty vocal about a lot of things in a way I don't think tptb would be okay with

There’s always a lot of red herrings in those lists because any money they can draw in they will, example is Nicki Gogan appearing on Sportsbet in previous years despite being in a long term relationship, so IMO Abbie is one of these as she has high name recognition, and will have even more soon as I believe she’s on I’m a Celeb?
Having said that, I think production would give her a shot, she was reasonably outspoken after Matt’s season, and she still got BIP. But she’s blonde, and after all the backlash they got this year when E&B were announced the only guarantee we have this season is that the Bette WON’T be blonde! Also I *think* she has a boyfriend at the moment, but not sure as you can never tell with her, and can’t be bothered to follow her closely

Yep @Dirty Street Pie the actual Lead is rarely on the list and if they were the odds would be closer to an F1 - ie 1.25 - 1.5 IMO.  So IMO definitely not anyone on the current list and it's either Renee or she's at least being very seriously considered (since if it wasn't her, Sportsbet would know and she'd be on there with all the other current names being thrown around).

Abbie isn't seeing that guy (just posted pics of them together for attention I think) but yeah she's on IACGMOOH and I don't think TPTB would want to risk viewer fatigue after how sick everyone got of Angie doing back to back shows.  She's another one they're keeping on the backburner IMO - she might trash the show but she'd come running if it was offered to her IMO.

She went on an ABC show and talked about producer deception and their tricks like frankenbiting. I don't know if they'd actually take a genuinely dim view of that. However there also might not be a huge crossover between people who watch the Bach shows unironically, and people who watch niche ABC shows about unf*cking your reputation (Reputation Rehab).

leavers wrote:She went on an ABC show and talked about producer deception and their tricks like frankenbiting. I don't know if they'd actually take a genuinely dim view of that. However there also might not be a huge crossover between people who watch the Bach shows unironically, and people who watch niche ABC shows about unf*cking your reputation (Reputation Rehab).

Yeah I think the centre of the Bach/ABC Venn diagram is basically just us.

I couldn't even watch the whole thing - it was too weird watching Abbie infiltrate the channel I rely on for accurate news coverage.

And I agree, I doubt TPTB would care.  If they got desperate and needed a Lead at short notice they'd still consider her IMO - for all her faults they know she'd get the boys... uhhh... worked up, IMO.

So Dramatic is claiming Renee’s “in the final stages of negotiation”. IMO I won’t believe it ‘til I see it (I think Renee would be great but I’m skeptical of the source).
Source 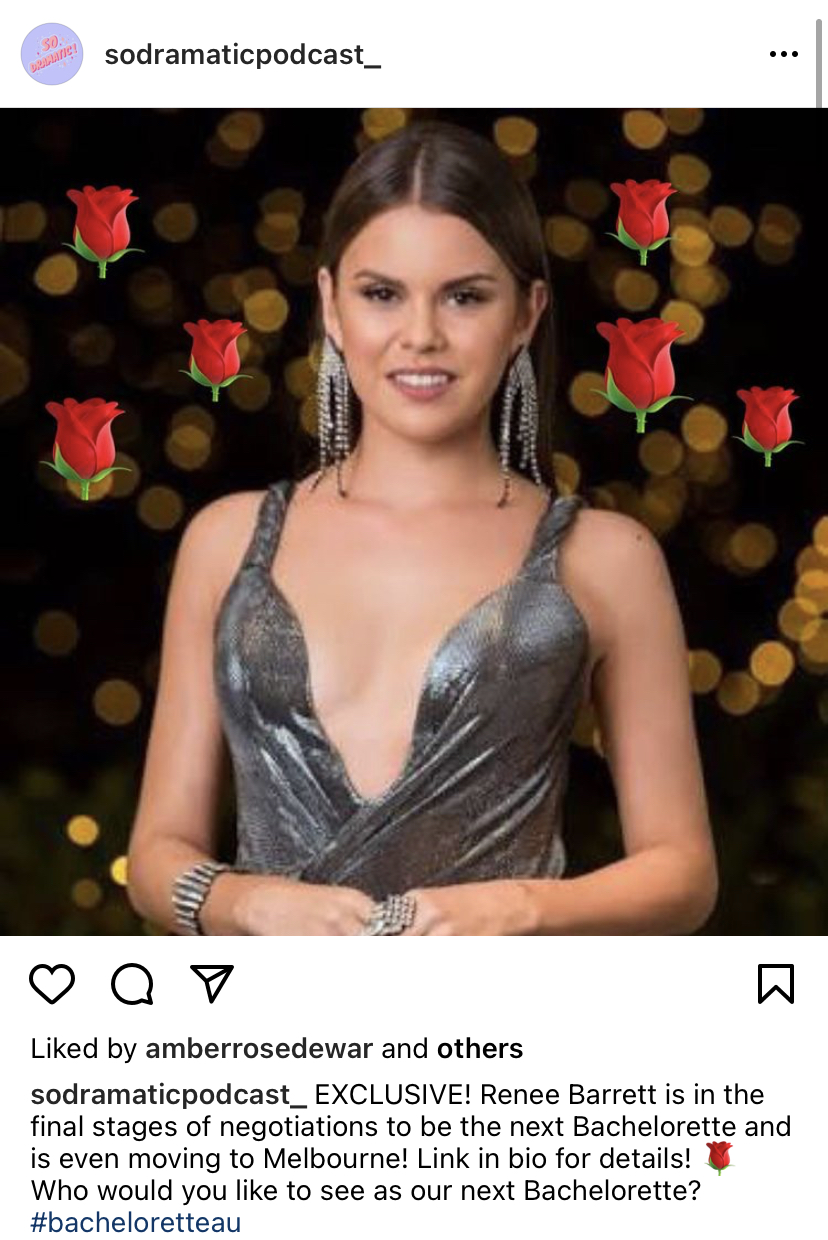