Nothing exciting to add - just a couple of different pics from the same GD. 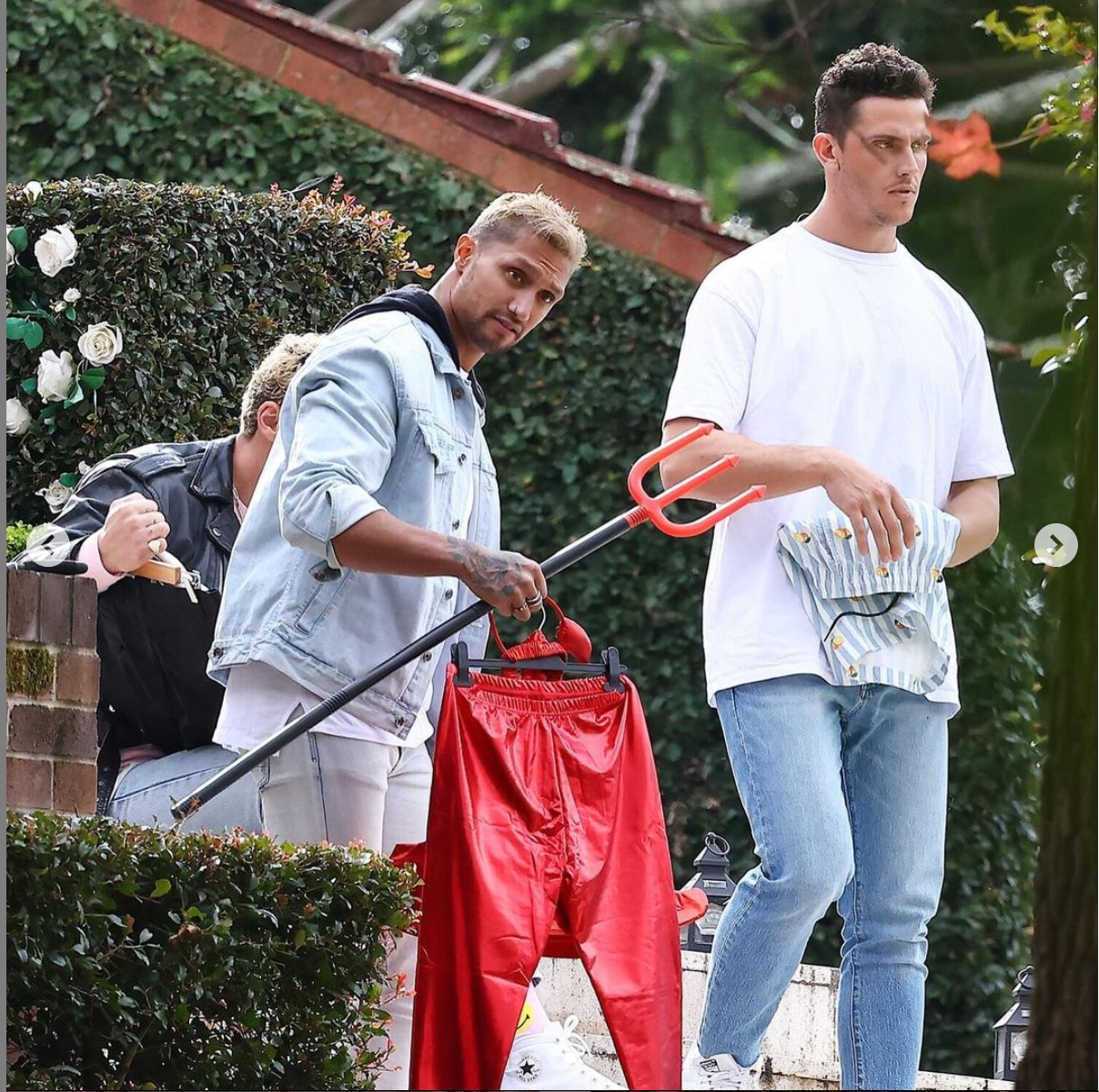 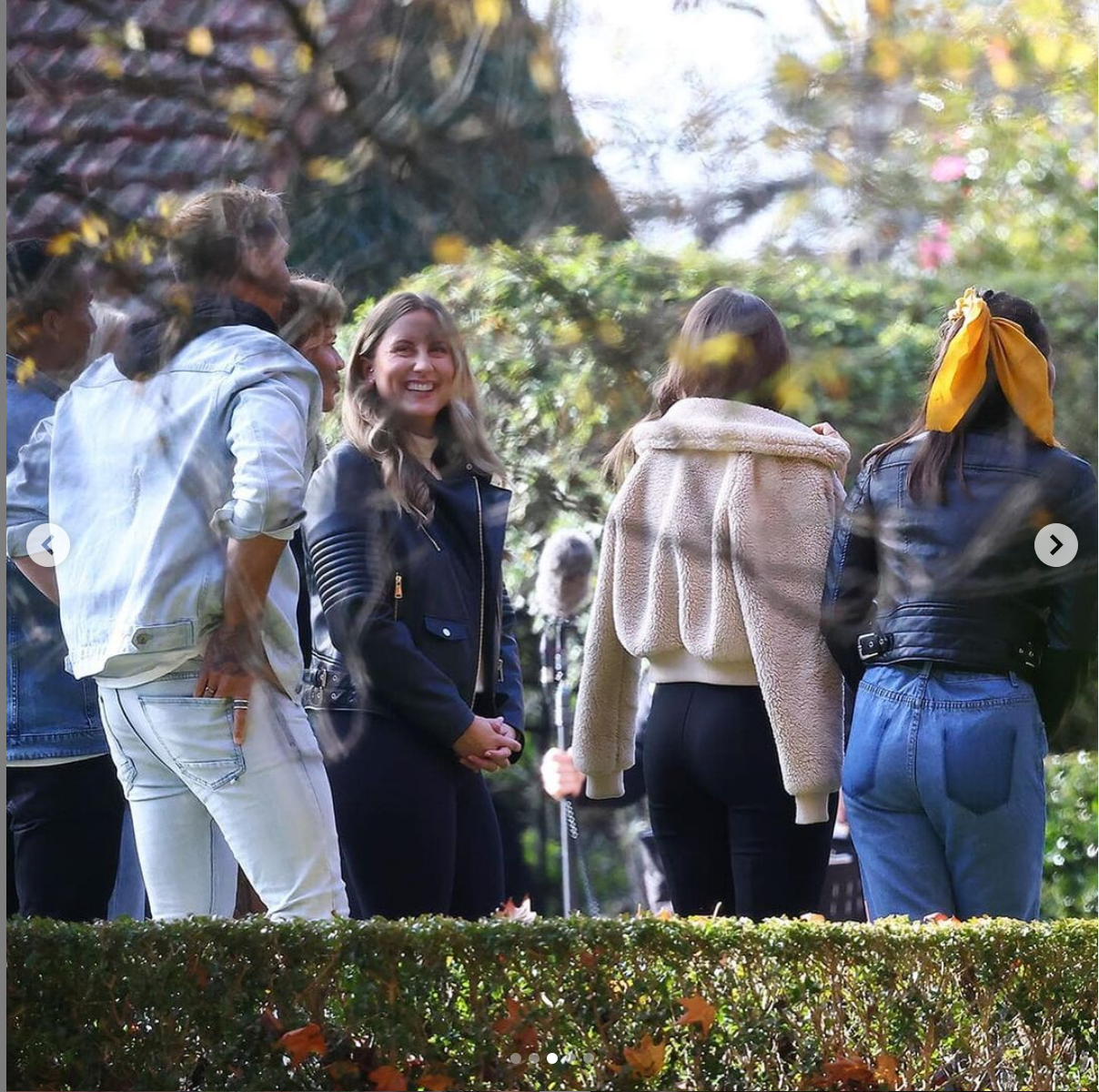 What's the devil man trying to prove and the guy to his left carrying black pants with a wide belt? The guy to his right carry what looks like sleeping attire.

As predicted the next date to "leak" is with a woman.  And surprise surprise, it's Jamie Lee.

If they didn't hook up in real life when they had multiple opportunities I find this storyline hard to swallow.  I strongly support bisexual visibility but please, give us something GENUINE, not the same kind of IMO contrived, scripted crap we saw in Paradise.

The Bachelorette's first bisexual leading lady Brooke Blurton filmed a romantic date with a female contestant in Sydney on Thursday.

Youth worker Brooke, 26, enjoyed one-on-one time with Jamie-Lee Dayz on the Rainbow Walk in Prince Alfred Park - despite the city being under strict lockdown.

Brooke appeared to be swept off her feet by Jamie-Lee, who interestingly enough also starred on Nick 'The Honey Badger' Cummins' season of The Bachelor.

The pair even shared a steamy kiss while strolling along the colourful walkway.

This is the first time a same-sex date has played out on The Bachelorette anywhere in the world.

While Sydney was in lockdown on Thursday, the date was filmed before further restrictions were introduced the following day, meaning groups of 10 or less could go outside for exercise at the time.

But with that said, it didn't appear as though Brooke, Jamie-Lee or the crew were doing much exercise as they filmed around Surry Hills.

Despite the potential lockdown breach, the Rainbow Walk footbath was certainly a fitting destination for the same-sex date.

It was established in 2017 to celebrate the legalisation of gay marriage in Australia.

Brooke and Jamie-Lee have been romantically linked before.

They were both contestants on the 2018 season of The Bachelor, and rumours swirled they may have been more than just friends.

But Jamie-Lee shut down the speculation in an interview later that year.

'Brooke is an amazing person, she and I are great friends. I actually am a little disappointed that all of these rumours have come out,' she told Now To Love.

'I was there for Nick and that was my focus.'

Despite downplaying their romantic history, the pair seemed to have chemistry as they smiled and held hands on Thursday.

At one stage, Brooke threw her arms around Jamie-Lee and kissed her on the footpath.

They briefly wandered around the area to do some sight-seeing, before moving to a city hotel to film additional scenes.

The social worker accentuated her striking features with a touch of bronzer and shimmery eyeshadow, and styled her hair in loose waves.

She wore her sleek, dark hair in a straight style, and opted for minimal makeup.

Brooke has already made history as both the first Indigenous and first openly bisexual Bachelorette.

The forthcoming series will see both men and women competing for her heart.

It marks the first time globally that any of the Bachelor or Bachelorette franchises have featured a mixed-gender cast. 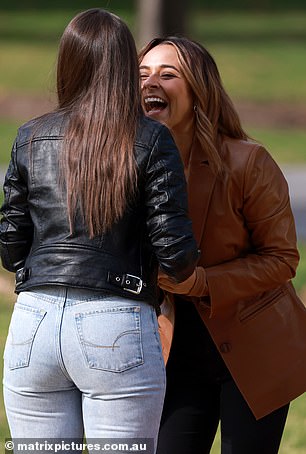 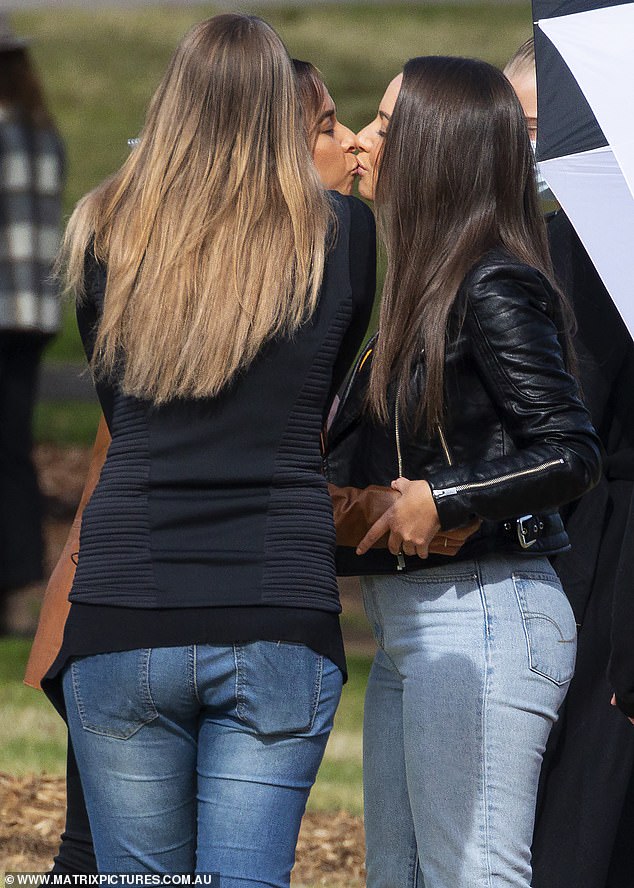 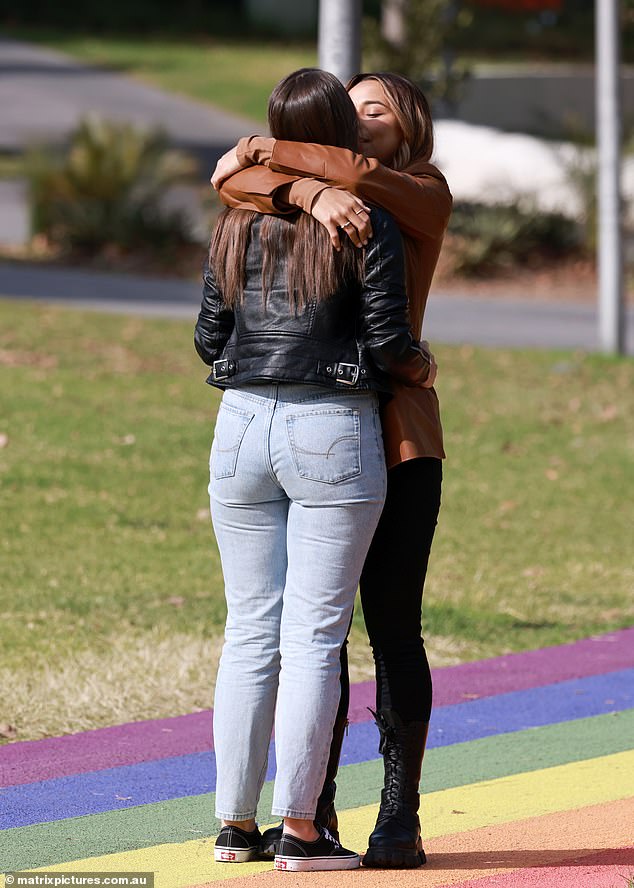 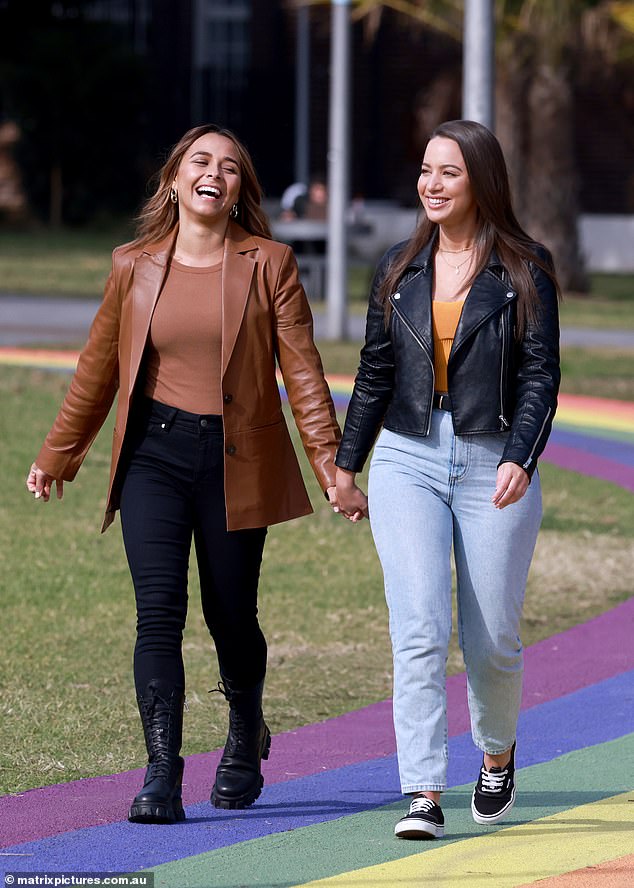 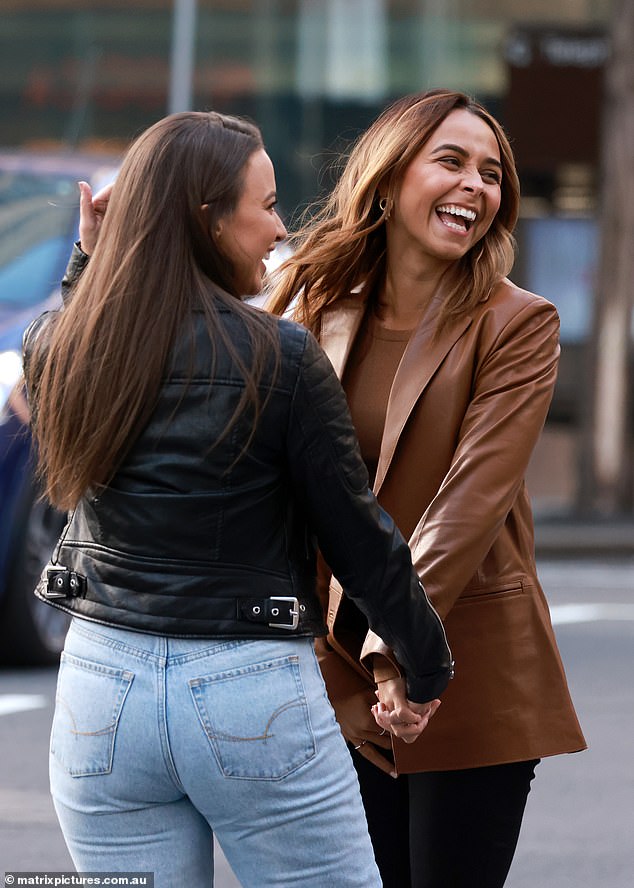 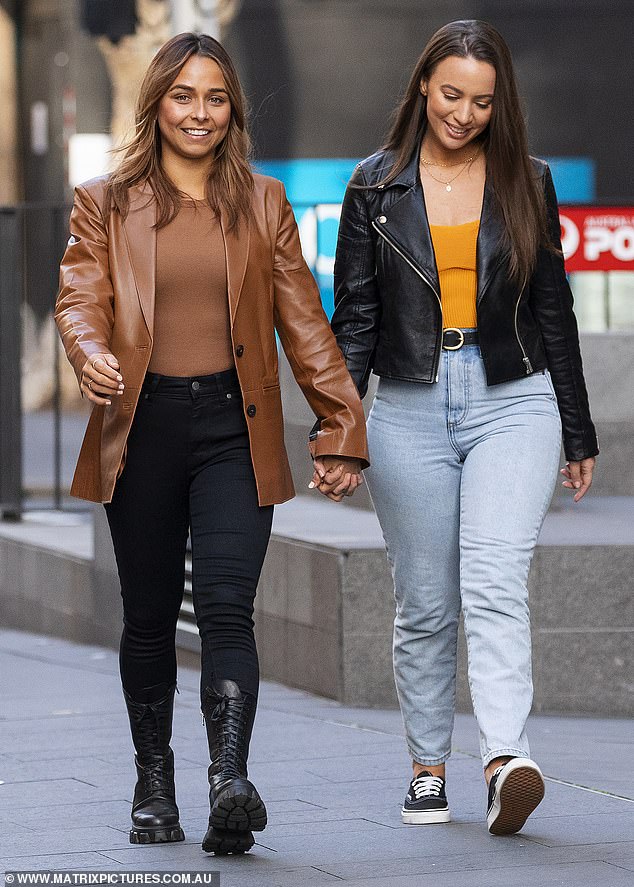 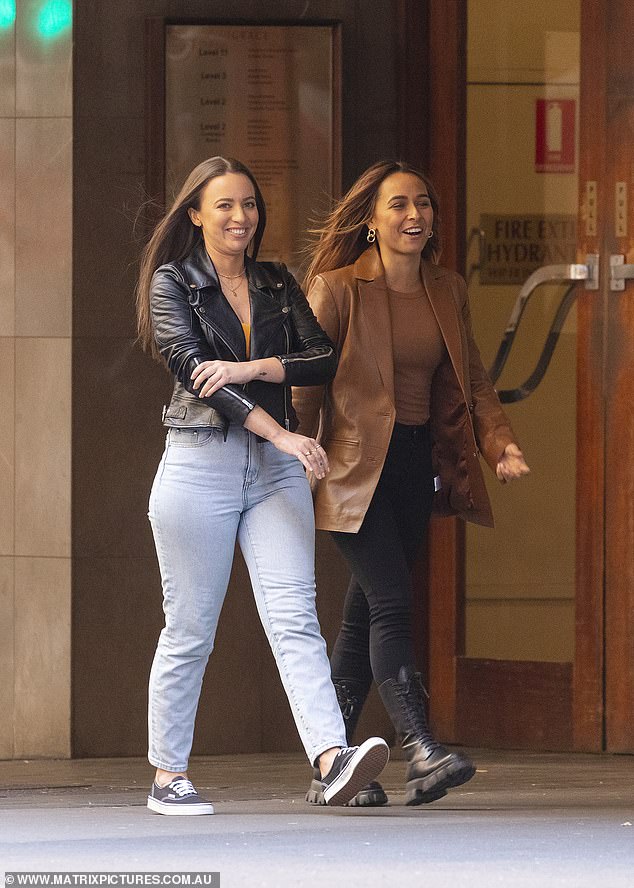 Also, HELLO LOCKDOWN?!  Surprised they didn't film the date at Harvey Norman and show them browsing half price whitegoods.

And just to clarify, I'm not questioning these girls' sexuality and do believe that they are both genuinely bisexual (unlike certain past contestants, who IMO were faking their sexuality for attention *cough Rachel and Vakoo cough* but I see zero chemistry between them and am calling that out, as I would any other season.

And as a result, her upcoming season will feature both male and female suitors vying for her love.

In a new interview with The Kyle and Jackie O Show, Bachelor franchise host Osher Gunsberg hinted that the men and women on the show may hook up with each other.

When pressed by hosts Kyle Sandilands and Jackie 'O' Henderson about the possibility of the contestants hooking up, Osher gave a very cryptic answer.

'That is an interesting thing that we, uh, may or may not address when the show goes to air,' he said nervously.

When Jackie quizzed Osher and asked if producers had come up with a way to stop participants finding love with each other, he noticeably avoided giving a direct answer.

@Bobette Yup. We called it and I doubt they did anything to stop participants from finding love with each other. Probably encouraged it.

To me this isn't really going to be a season of the Bachelorette, more like BIP...which kind of ticks me off. I look forward to the Bette for the eye candy and this mess means not as many boys.

by leavers Yesterday at 3:33 am

by Bobette Yesterday at 5:38 am

I was going to say how is this even still filming considering the *situation* in NSW but considering Gladys is sending construction workers back to work I doubt officials are going to bat an eyelid about a camera crew and handful of contestants trotting around.

How many weeks have they been filming now?  Four, Five?  I bet they're keen to get it wrapped up and am expecting another NSW-heavy Top 4, though I doubt the non-NSW contestants will even be allowed back into their home states the way the borders are.