All these so called sources make my head spin. If IMO Dale handled this properly, agreeing to a joint statement it would have avoided part of this mess. I wonder how long it will be before we hear from the realtor.

I'm glad Mr I don't play your games didn't agree. Can you imagine???

admitted he hasn’t spoken to the hairstylist since she slammed him on the show, but claimed production called him while she was filming season 16 of The Bachelorette.

“Apparently, she wanted me on the show to make peace,” he told Us on Thursday. “Till this day, I don’t know if that was true or not, or it was the [just] show wanting me back.”

Dead at Dale saying they'd be "cool". Did you know her?

team no one though. 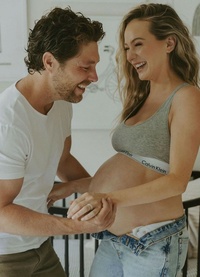 Remember way back when Dale was spotted having dinner with a fellow model? There's photographs of it, it wasn't just an anecdote. And people (not necessarily here, I'm not sure if it was discussed here, but I'm assuming people here read other Bachelor sites) jumped to defend him?

It's not, imo, normal for a newly engaged man to be having an intimate dinner with another woman! Imagine you just got engaged or even just became 'official' with a new boyfriend. And a week later he goes out to dinner with a woman from work. Would you be okay with that, really? No! Nobody would! I'm one of the most chill women ever, I don't tend to be jealous at all and my partner of 16 years has lots of female friends and we talk about the ladies we both think are hot a lot! But do you think I'd be cool with him going to dinner with another woman? Eww! No!

Anyway, long story short, when someone shows you who they are, believe them! She should have looked at those photos and dumped his azz immediately. Of course he's no good and it's frustrating that just about everyone could have told her that if she'd been willing to listen.

Ugh. These two are messy.

This show is getting ridiculous. I think if both people are on the same page regarding fame—they either both want it or don’t—then it can work but not if they differ on that. Clare wants a guy who’ll move to Sacramento and start a family and Dale just wants to play in the city and build an IG following to further his career. He shouldn’t have told her he would move to Sacramento and she should have looked for a guy who was down-to-earth and wasn’t so obviously looking to build his brand.

I still think they did genuinely have chemistry/feelings for each other but they clearly want differing things out of life right now. If Dale really was cheating then that’s bad but we really don’t know if that is true.

E! News posted this story a few hrs ago claiming multiple sources were telling them Eleonora Srugo is the woman Dale was cheating on Clare with. I reached out to her via IG for comment since there was a lot of he said, she said going on. This was her response: https://t.co/mhOzYMLAYu pic.twitter.com/IwJmKVJnDr

Well that didn't take long to hear from the realtor. I'm glad she got her say out there. I'd be fuming if it wasn't true.

Reading the various articles here’s what I think happened:

Dale thought they were breaking up.
Clare thought they were taking a break.
Dale wanted to make a breakup post.
Clare asked him to wait as she thought things could still work out.
Dale posted his breakup post.
Clare is blindsided because she thought it was just taking a break rather than a breakup.
Dale talks to paparazzi still thinking everything is cool.
Clare is not cool and posts her story.
Clare goes to paps about cheating.
Dale and lady deny the cheating.

Who knows if the cheating is true but the rest was probably a big miscommunication.

@gabriele that seems plausible to me. I think Clare just misreads Dale and has since day one. She reads him just being there as 'showing up'. She misreads him not actively pushing her away as wanting a future with her. I think it says a lot about her mentality about men. She needs to do so much work on herself before a relationship could ever really work. Either that or find a man who is just already completely in love with her and thinks she can do no wrong and wants Sacramento, marriage and babies right now. It's not impossible that that man already exists. She needs to look for him, not try and make an unwilling man into that.

I can buy that E.S. was just a platonic friend to Dale. It was probably insensitive and not a good look for him to be spending time with his friend while newly engaged. However, I partly see it as being a symptom of him wanting to spend most of his time in NYC, and Clare wanting to spend most of her time in Sacramento. IMO they were just never a good fit. They want different things.

I wouldn’t be surprised if Dale is a flirt with women. But, if he’s as image conscious as I hear people say he is I would be rather surprised if he cheated. Being on the B’ette and engaged to the lead I wouldn’t think he’d risk the negative publicity. He may also not be the type to cheat. At least I hope not. It would be quite sad for Clare if he really did.

There has to be a lot of guys who Clare could date in Sacramento and it wouldn't have to be a "fall in love at first sight" kind of start. She seems to want a Prince Charming and no man can live up to that. The show can work for some people but apparently not for Clare.

Dale seemed to get in over his head and then just wanted out but possibly didn't do it in a way that made Clare understand that it was over. Maybe she didn't want to hear what he had to say but I'm guessing he wussed out on making it strong enough.

I don't know @albean99. If a man tells me he wants to take a break, that is a pretty clear signal to me that it is over. I can see Clare just not wanting to hear. Dale is at fault for not standing up for himself...right from the beginning when they pressured him to propose...but the Clare from my TV never was a good listener.