Hold on to your hearts, Moses Mackay is the new Bachelor NZ

Singer, actor and all-round good guy Moses Mackay is the new single bloke handing out the roses on The Bachelor NZ.

Tonight TVNZ announced a new season of The Bachelor NZ will begin on March 2, which is less than two weeks or 14 single one-on-one dates away. Along with fresh episodes of the reality show that united Art and Matootles and gave us a koala pooing on national television, TVNZ also revealed the identity of the new Kiwi bachelor ready to sweep the nation off their feet. That brave gentleman, New Zealand, is Moses Mackay.

@Bobette wrote:Thanks @Katiebelle.  I'm way behind - no episodes have been uploaded to the Archive since ep 3.  I did notice several comments on SM from people calling Hamish a sook?

And yes, Bachelor ahoy!  I'm glad this season of Bette isn't going to drag like the last one. @GuardianAngel could we please get a separate thread for Bachelor NZ?  Cheers. 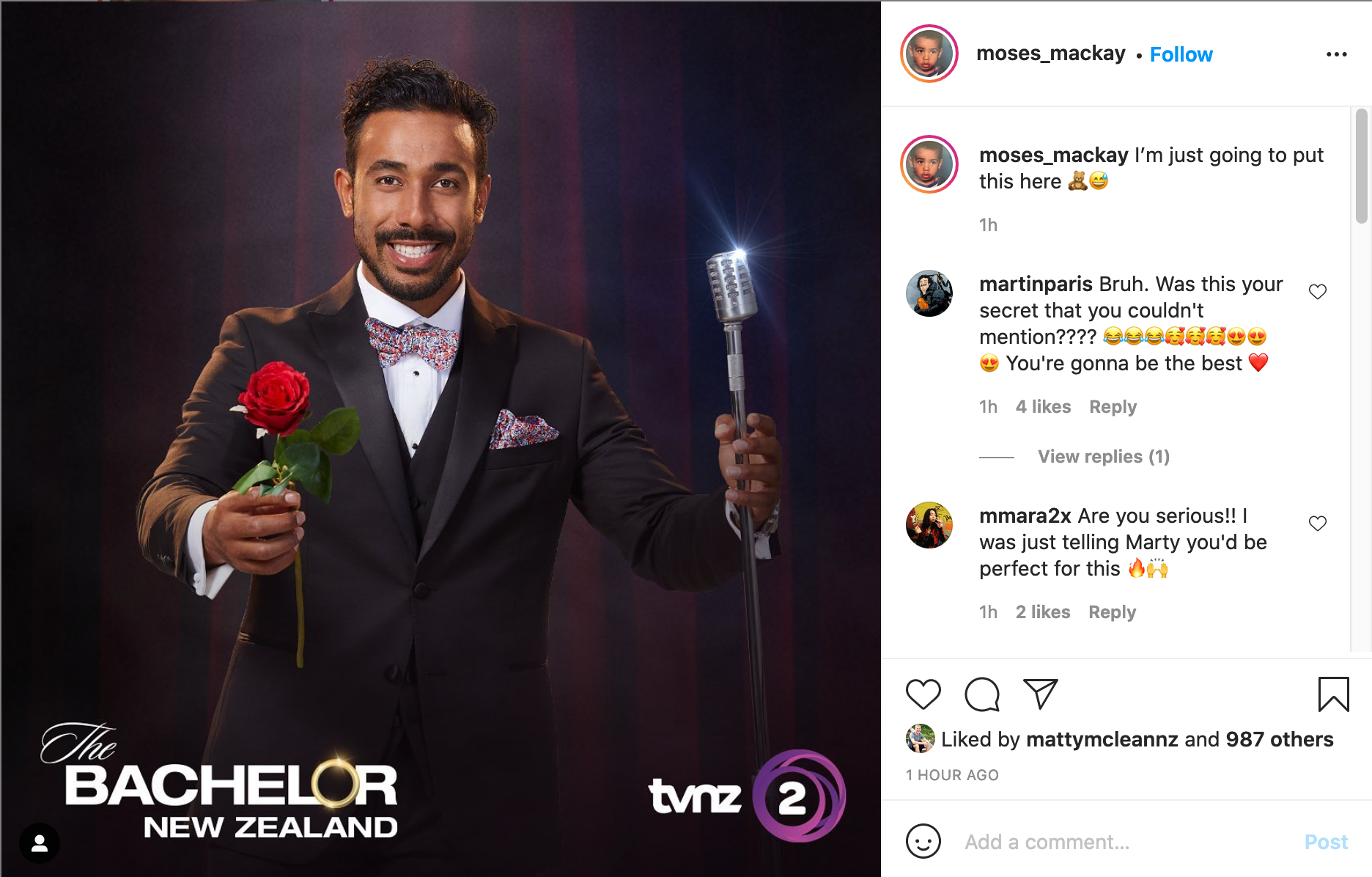 Oh my gosh! Love them!

Excited for him!! He’s cute. Does any one know when it airs?
ETA: never mind just found it March 2, does anyone know if bacharchives will have the episodes up.

@Zaynab I seem to think bachelor archives is having difficulties. I remember this happened last year. I hope they weren't taken down. We are waiting fo Bachelorette South Africa, nothing yet.

Insight into more of the contestants:
https://www.nzherald.co.nz/entertainment/revealed-the-former-reality-star-hoping-to-woo-the-bachelor/K3MUPAYGJKM5PRZIR7PU26TAQY/

Also the ig thebachelortvnz has more of them

@jen689 @Zaynab thanks for posting!

A lot of amazing backgrounds and occupations!

https://instagram.com/thebachelortvnz?igshid=xcj91ybl7tzk
Preview is on Instagram page and imo looks great.  Not sure if possible to do screen shots?
Also on bachelorettenz story.

by Zaynab Yesterday at 3:55 am

Watching the first episode on TVNZ live with expressvpn
I liked Moses so far I found him genuine. I also really liked his mom.

by Sprite Yesterday at 8:05 am

I watched the first episode. Moses seemed nervous and surprisingly awkward for someone used to performing. His intro was good, but his behaviour on the red carpet seemed somewhat manic. I don't know if he has watched the show before and just didn't know what to do or if it was nerves, but it was a bit strange. Moses indicated that he doesn't date much and that could explain some of the behaviour. I hope he settles down because it was just kind of odd watching him. I can't quite explain it.

He seems to have a type...brunettes...but I didn't really see any big reaction to anyone. There were a few who he seemed to like or enjoyed their energy, but I didn't see anyone wowing him.

by Zaynab Yesterday at 3:43 pm

@Sprite yes I saw a comment on twitter saying they liked Moses and didn’t really see him have any chemistry with anyone. He was manic as I don’t think he was comfortable yet. Compared to the us version the editing isn’t as obvious I found, the only ones I could point to being significant are those that intros weren’t skipped over. I think there is gonna be introducers based on the sneak peek on ig.
Shennae, shivani, Devani and a few of those that full intro was shown.

by Sprite Yesterday at 4:10 pm

@Zaynab Yes, I am hoping there will be intruders since I didn't really see it with anyone yet, but that could be because I don't know him so it is harder to see tells.

Truthfully, I don't know if I liked Moses. There were a few things he did which I found kind of...I don't even know how to express it...hurtful/offensive/insensitive. When he gave Niki a rose and she went to thank him and they sort of accidentally kissed on the mouth and he then wiped his mouth with his hand...I really did not like that. I know he tried to brush it off and make it funny, but I didn't care for that. I don't know if he is just socially awkward, but there were a few things like that that he did/said during the episode that just made me uncomfortable and feel bad for the ladies.

I am reserving judgement and will see how it goes. Hopefully, he will settle down, but he is certainly not the polished type we are used to seeing. I really liked his intro and some of the other videos I've seen of him when he was announced, so some of the things he did last night really threw me for a loop. What I saw and what I was expecting didn't really mesh.