Oh my gosh, Jed is originally from my neck of the woods - Gippsland. We're going up a step from pot plant Jarrod too, ha.

If Jed was 21 in 2018, that'll make him 24/25 ish. While he's a young lead, he seems quite accomplished and done much already. I know he's probably in Melb now, but I hold hope he's somewhat down to earth coming from a country / farming background.

Just what we need, a young lead - definitely going for a Bach in Paradise style with the age ranges and all diff type of girls. 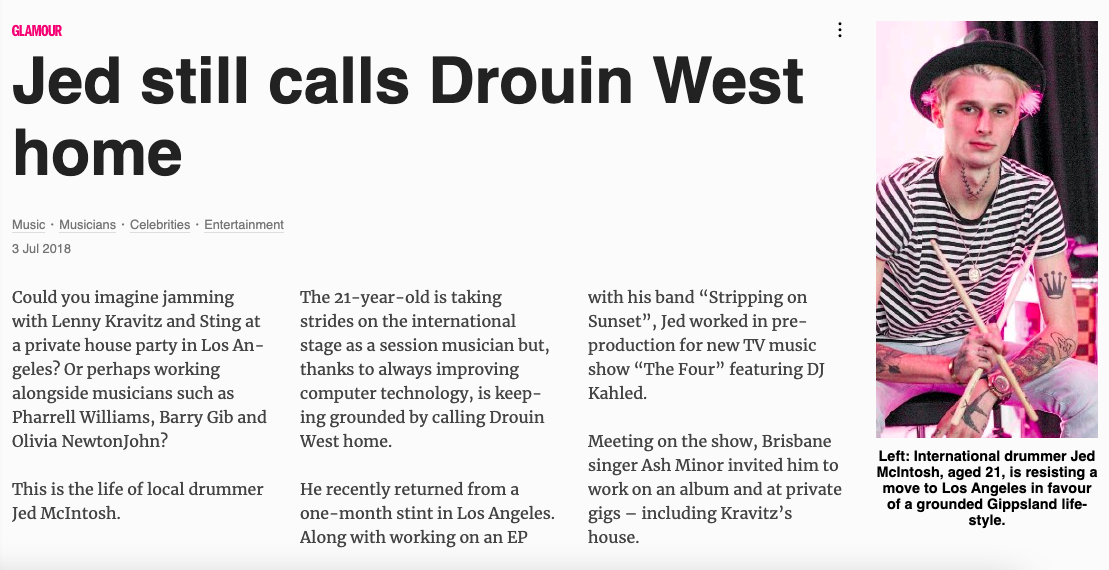 In the 2009 bushfires, Jed (aged 12) lost everything but his drum kit, and was the only kid from his school to lose his home. As well as being mentioned in the HS, he also gave an interview with the ABC - and he spoke so well for a kid.

I like to think Todd pulled out once he realised he wouldn't be the Bachelor, he'd basically be going on a glorified BiP (just a little bit of fan fiction, I obviously know nothing about it)

and BiP is fine. Great, even. But this just sounds like a bad version of both BiP and Bach.

Bobette wrote:I reckon there might be one more tomorrow.

Chelsie seems to have developed a case of loose lips, which could come in handy.

Bobette wrote:I reckon there might be one more tomorrow.

Chelsie seems to have developed a case of loose lips, which could come in handy.

The DM articles seem to have come out around midnight-ish so I've just done a quick squizz and couldn't see an article posted announcing number 4.. yet.

What in the world are they thinking???

Wasn't sure whether to put this post here or in the SM thread as it mentions Osh too (so I've put it in both), but apparently something thinks there will be an announcement on The Project tomorrow night.

If there's four Leads you'd think they would save the best till last. I know I conceded defeat but Todd hasn't posted for a few days. JUST SAYING.

Bobette wrote:If there's four Leads you'd think they would save the best till last.  I know I conceded defeat but Todd hasn't posted for a few days.  JUST SAYING.

I want it to be him but I also don't because this season seems so messy but maybe he could redeem it for me.

Bobette wrote:If there's four Leads you'd think they would save the best till last.  I know I conceded defeat but Todd hasn't posted for a few days.  JUST SAYING.

The first three leads leaked a day after each other and now we have nothing for 2 days! And it'll potentially be announced on The Project? Something's definitely up and it fishy.

The only thing is I remember during Ali's season thinking he was a great contestant but wouldn't make a good lead.  Suspect TPTB probably felt the same.

Including him as part of a group might be an attempt to draw long-time viewers back (he was quite popular at the time) while not having to rely on him to carry the whole season.

And if so, they would have to announce him last IMO, since announcing him first would make it look like he wasn't good enough on his own and needed backup.

Please, by all that is holy, no 4th lead. That is beyond ridiculous. Stick a fork in it already.

Welp, Todd just posted from home in Perth. I concede for a second time.