@Jeepers wrote:Aaawww bummer. Clayton took Gabby for a walk to talk holding her hand during the birthday party And we didn’t get to see it

BATCHELORWHATEVER. HAS A PHOTO UP

Other than Susie’s airtime during her 1-1 date, all 3 of the F3 were hidden this episode and it was unfortunately focused on the stupid drama.

It looks like Clayton taped in person at Jimmy Kimmel today so if their was an SHV it likely ended yesterday or this morning at the latest. 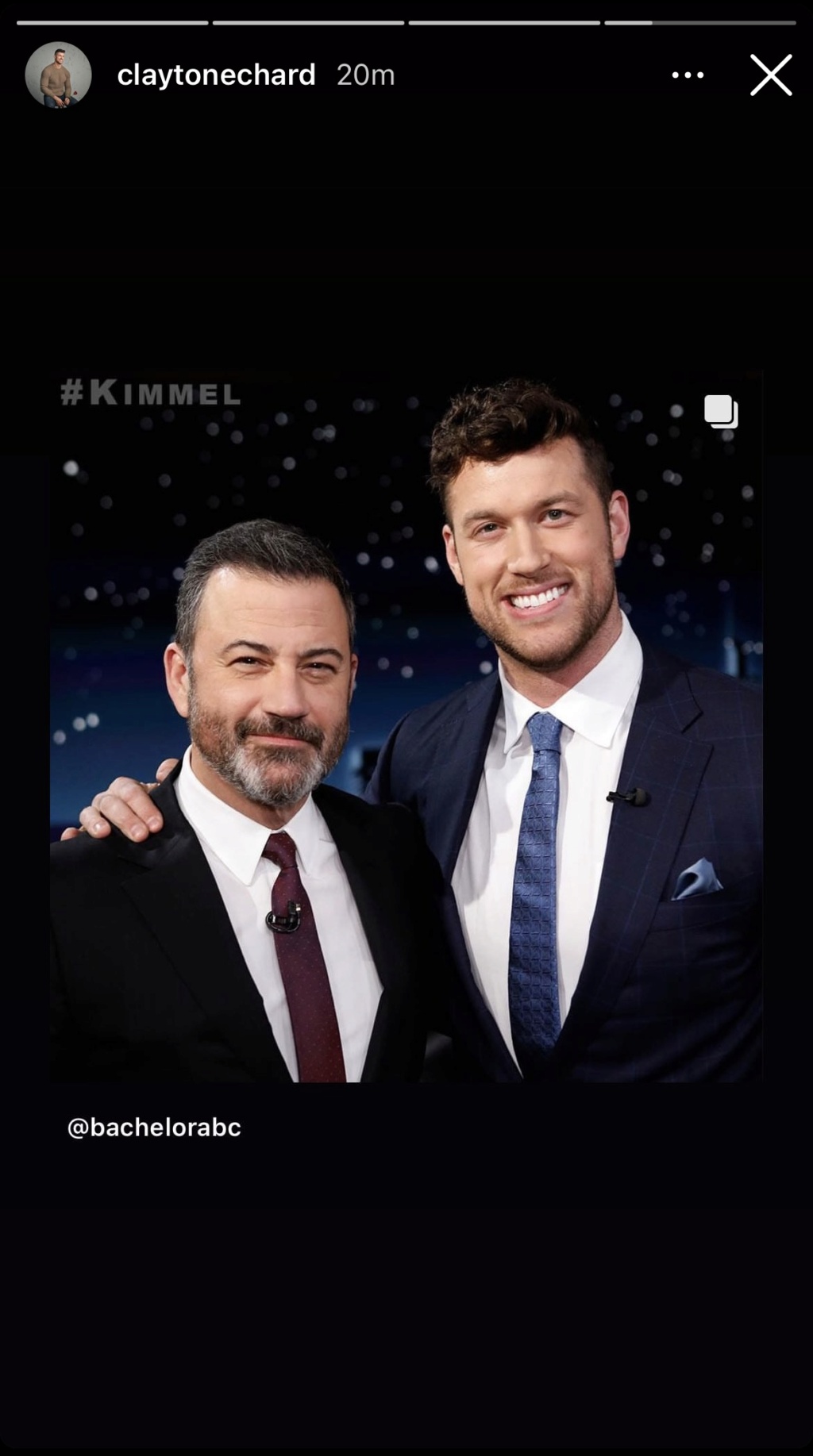 @Kayben14 wrote:Bachelorwhatever on IG posted this. Apparently Susie’s family/friends made comments on one Clayton’s post. And also Susie IG story that she posted in her car said it was 4:04pm and she posted it this morning. I’m confused, I didn’t think Susie was F1 because she was obviously in other stories with friends and family the whole weekend unless this was purposely planned posts. 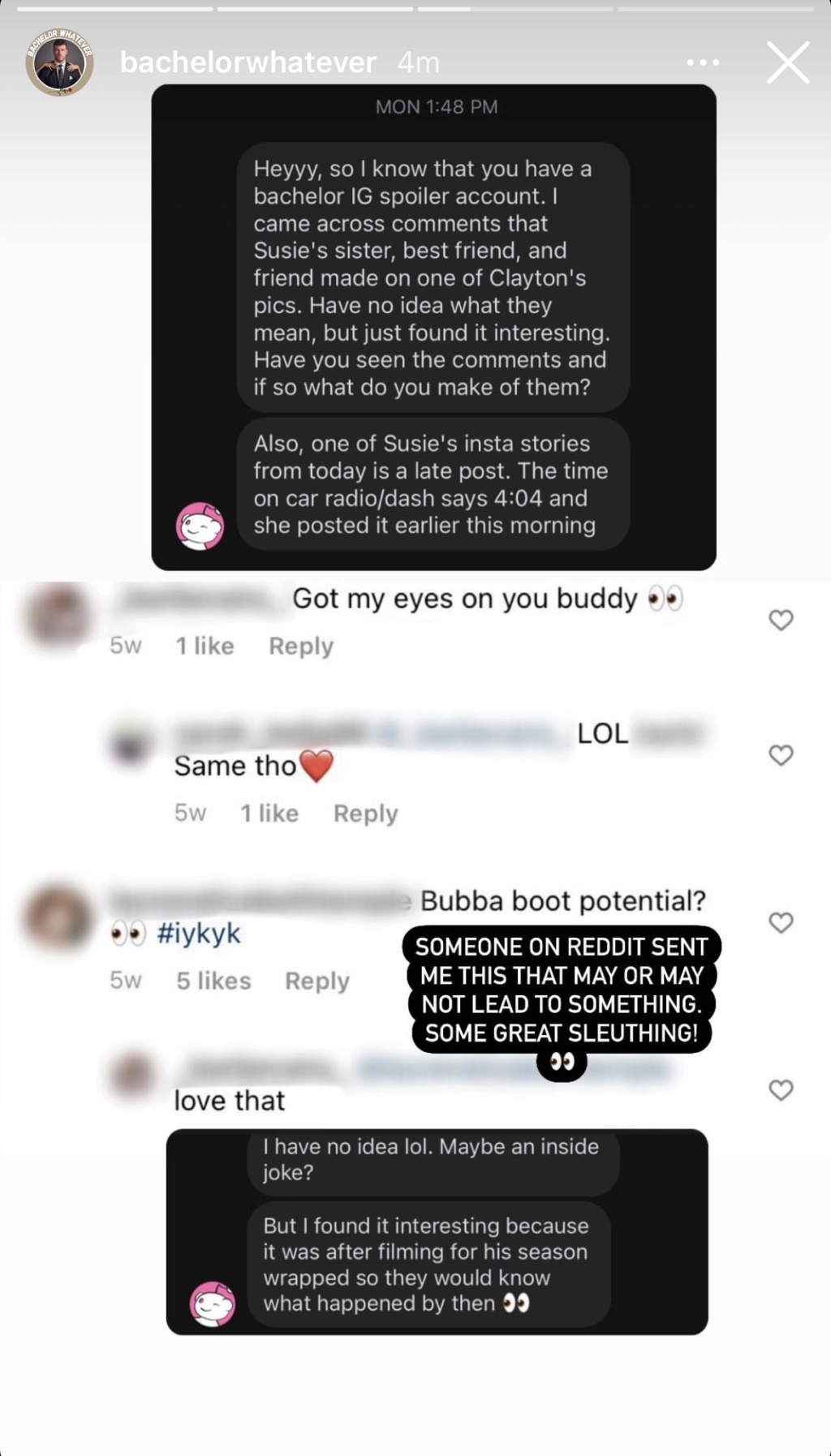 I read this a couple of times and have no idea what it means.

Kinda wonder if Kimmel will give “winner predictions”. He always just says what abc wants him to say. But since we don’t have a f1 people are going to hold on to it as something. His last prediction for Matt was Bri (which was wrong) and he predicted Hannah Ann for Peters season. So I have to wonder which way abc is going to want him to go this season.

Will wait to see how his date goes with Rachel & Gabby but as far as Suzie , I can see why she's one of the F3, seems he likes her. jmo

Gabby posted a tiktok that actually looks to be in Denver. Some of her bronco cheerleader friends is in it as well as her dog that since she returned from filming has been in her dads house.

I noticed that Rachel refers to “checking boxes” for what she is looking for in a guy. In the upcoming preview she refers to her “list” of wants. It appears she mentions again in a future about checking boxes. Interestingly, I found this Clayton comment in the Batchelor Nation interview regarding falling in love with 3 women.....

“”The experience really helped me realize that I didn’t necessarily have a “type.” I realized I was just looking for who makes me the most happy when I wake up in the morning and who’s that first person that pops up on my mind. I realized my “type” is very fluid and that’s awesome. It was crazy that I got to that point to realize this and those women helped me get there. And at the same time, the most challenging part is realizing there isn’t just a list that I can check off. You can’t compare if one person checks 100 boxes or another checks 99 boxes. It really just came down to feelings. And when it comes down to feelings, I can’t always rationalize them. As a very rational person, that’s where I struggled.””

Who does Rachel resemble? I look at her and want to put a name to someone else who could be her twin.

@Norcalgal wrote:Who does Rachel resemble? I look at her and want to put a name to someone else who could be her twin.

A little recap of Susie on BHH interview. Her friends applied her for Colton’s season but it wasn’t sent in in time. They called her for Peter’s season but she decline because she was dating someone at the time. Another friend signed up her up for this season and she got in.

Called Clayton genuine and says she got to know a good human. Definitely didn’t sound like a f1 but didn’t say anything bad about him. To add she did say he was the most likely to start drama but kinda sounded like she didn’t want to say any of the women so she said him as a cop out and because in her words the drama that happen centered around him.

Said she was close to most the other women and very complimentary to the group as a whole. Said she was close to Gabby (called her her best friend of the house), Serene, Teddi, Rachel, Kate, Marlena, and kept wanting to add more. It really did sound like the two she was most close to was Gabby and Marlena.

@Norcalgal wrote:Who does Rachel resemble? I look at her and want to put a name to someone else who could be her twin.

To me she looks the singer Jewell